If You Knew What We Do, You Will Never Sleep Again - NASA Director


That'd boil down to something like "he has his own opinion and didn't hold a NASA press conference on that occasion yadayda".
But I agree, the whole statement is probably nothing more than an elaborate hoax. It's simply too good to be true.

This, if even true, seems to me to be a warning off of any interest in aliens because theyre, of course, violent dangerous beings just like us who cant wait to destroy us in the blink of an eye.

We're the "infants" and the aliens are the "adults" in the universe so we're of course going to be killed by them? What? Adults by nature slaughter infants en masse? No. Adults care for and protect infants and allow them to develop.

I say the aliens have been here the entire history of humans and could destroy us if they wished but being highly advanced, the simply do not wish it.

We primitive war apes are more than capable of our own destruction.

posted on Oct, 2 2016 @ 02:27 PM
link
I go to sleep everyday knowing there is a giant reactor in the sky that could go bad with very little notice. It doesn't even have to go all the way bad.... just a very good pulse at the right time would make us pretty much toast.


If there is anything worse than that, I have yet to see it.


As far as aliens go.... look no further than your past.


A superior race meeting us would most likely go the way the America's did when colonized by the Europeans. It wouldn't go very good for us... just ask the native America's people whose ancestry and legacy were destroyed by European invaders.

Why? because no one with any stature at NASA would talk like this. They would not chastise the audience nor suggest they possessed secrets that would scare the public. They certainly wouldn't use profanity--ever. If you will remember, the one time someone associated with NASA used a profane word (Apollo 13, certainly understandable) he was made to apologize profusely. If anyone from NASA did use a tone like this, irrespective of the content, they'd be out on their ear in a heartbeat.

I can't say I believe that in the entirety, although it might just be that someone could get turfed out for speaking a modicum of truth, and perhaps even being a bit crooked in other areas at the same time.
It all depends on what there is a need for the public to know.

As for the actual outburst, no, we don't properly know as yet... imgur.com...

might never know if the aliens get us...in a flash!

Paul Hertz was named Director of the Astrophysics Division in the Science Mission Directorate at NASA in March 2012. He is responsible for the Agency’s research programs and missions necessary to discover how the universe works, explore how the universe began and developed into its present form, and search for Earth-like planets. 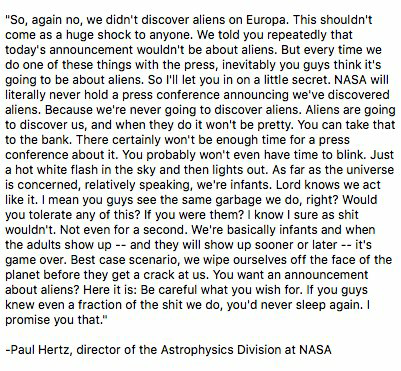 The most interesting line would be;

"Be carefull what you wish for. if you guys knew even a fraction of the # we do, you will never sleep again. I promise you that"

I cannot find the original source for this information but googling around it shows some links. I do not wish to state this as fact but if this is as it is, then it sure is interesting. Not only considering that a statement like this is confirming aliens exist as it shows their concern but it shows that NASA sure is hiding more then we know about.

Regardless of whether this is released by the man himself, the points made here are interesting anyway.

Mod Note: Please refrain from using all caps in the title.


This is news? I've been saying the same thing, almost word-for-word, since the '90s in the nascent UFO forums (alt.ufo anyone?). I don't know what NASA knows but I don't put any store in the statement:

Be carefull what you wish for. if you guys knew even a fraction of the # we do, you will never sleep again. I promise you that

What do they know? It can't be anything "out of this world" 'cause by now we would have heard something more than mundane knowledge.

I'll tell you what NASA knows: how to waste taxpayers' money by the trillions and little of what has been achieved since NASA started has benefitted only NASA employees 'cause we still have poverty, poor people, homeless, crime, poor education, few hospitals and doctors, etc. It's not a pretty picture.

If the trillions that NASA has wasted, unabated, were put to the needs of this country and its citizens, life would have been better. I say, get rid of NASA, stop wasting taxpayers' money without getting a return.

Aliens, what a laugh!

posted on Oct, 2 2016 @ 03:05 PM
link
I take this as a statement of superiority because they have responsibility for tracking asteroids.