/ note ! This is not some click bait thing, hey you can always click the button again to unlike....


but the thing is when you click it... its dead...nothing happens

Maybe its just a glitch ?
Maybe its not...

Seriously it stinks ... this is the only guy in the world who have said "i will bring down Hillary"... and now his FB page is dead... !

Who said "freedom of speech" ?

Not let alone wikileaks-forum who is on a rampage...
"Whilst Assange is busy destroying the Wikileaks name by publishing the full names of homosexuals in Saudi Arabia, rape victims medical reports and doxing Turkish women the WIKILEAKS FORUM is publishing real leaks with no hidden agenda
(PS, Assange refuses to publish these himself)
"source

"Until I realized that Assange was 'after' HIllary, I had high regard for there being a channel for whisteblowers who could help us unravel the hidden mechanisms driving global destruction. I've lost all regard for an organization that just becomes a personal vandetta against individuals.
( readers comment on Huff Post )"


(2) Alterations of a politicians name, or any other high-profile political figure, for disparaging political effect is not allowed, including within member avatars and signatures.

The title and your OP are conflicting.

Dead FB page or even worse... did they kill Julian Assange?

originally posted by: kloejen
a reply to: introvert

Dead FB page or even worse... did they kill Julian Assange?

I can't login to FB. I followed the link, but I fail to see a mention of either.

Can you provide screenshots?

You're looking on the wrong page. Try his official page. 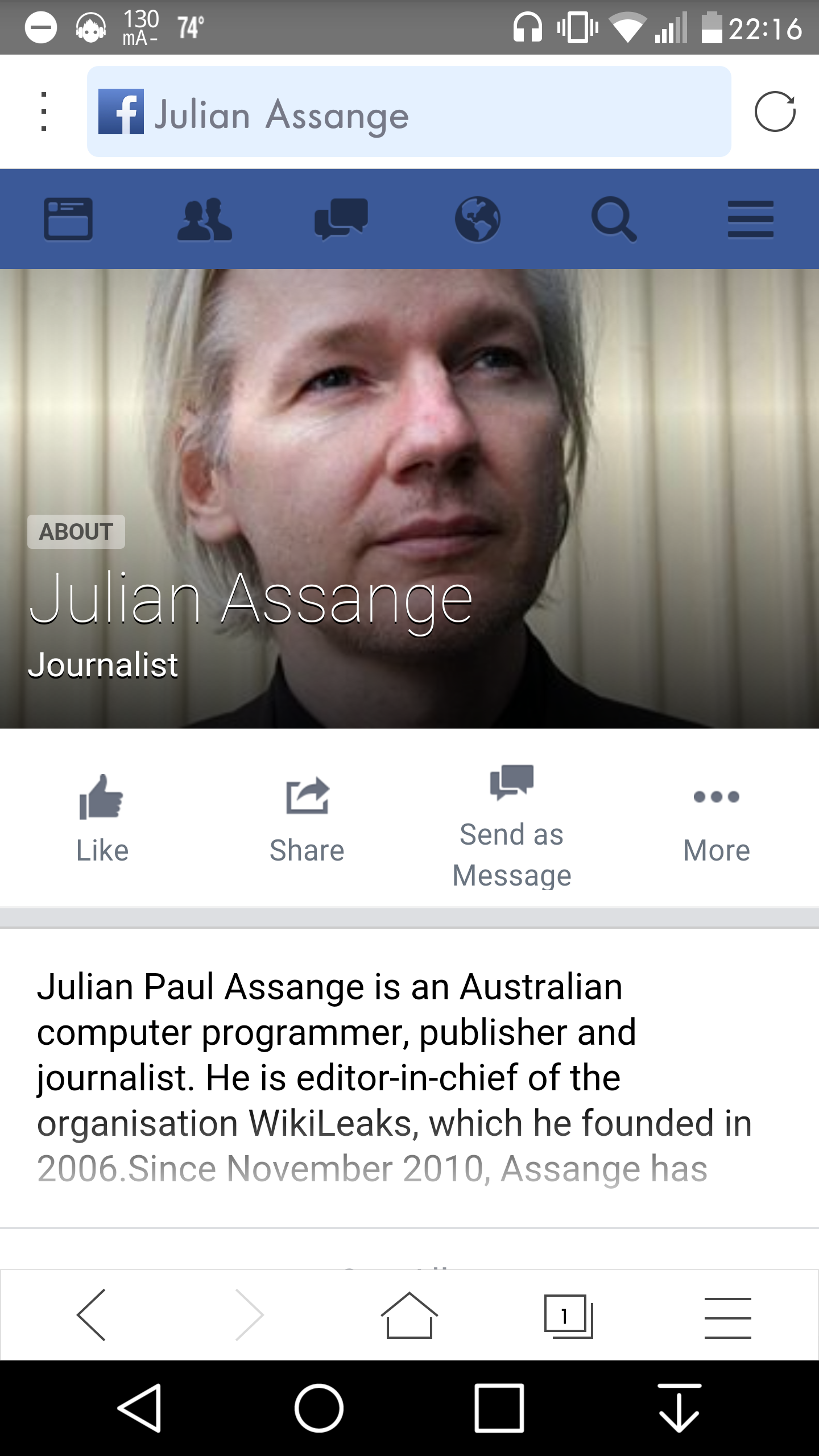 But seriously, check his page, and try te like button.... its dead.

wikileaks-forum, are putting him on the stake to burn with redicoules announcements. (the lame old rape rumour)
wth is going on ?

Thx, but that is the link i got already ?

or am i following yet another hoax page of JA ?

i know there are many... but pretty sure this is the one?

Not meant to slander HRC, sorry. This was not as slander against HRC. I just reacted on the statement that HRC had about wiping JA out, as a political opponent, and yes, wrongly accused her first... my bad.

I don't know man. I went on Facebook search, typed his name for his official page... wait. He doesn't have a 'official' Facebook page according to Facebook. The below 1st picture icon (journalist) shows a FB auto-generated page based on web data, hashtags & such - it looks official but it's just collated data from FB scraping the Web and user comments. The other pages are groups set up by fans and spoof accounts. Are you sure he ever had an official FB page? 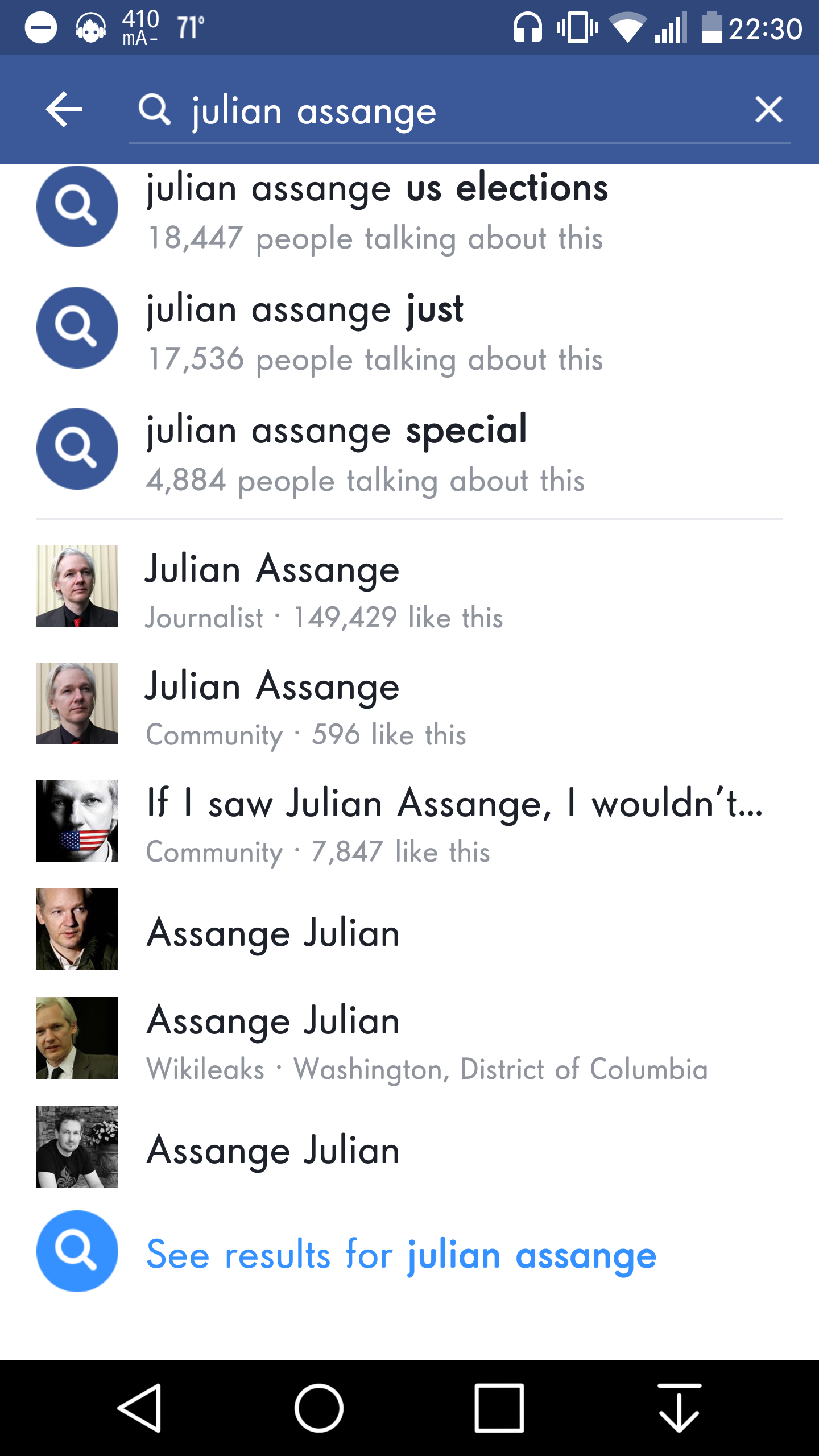 JA is on FB! . How would he else communicate to the world? Ofc he is using social media. but ok, it can be discussed upon of using FB.

It just troubles me that wikileaks-forum are slandering him as hell as we speak, and his page are inactive... but maybe its just me.

And for the record -- this is the first time in history interpol has issued a warrant of a socalled "rapist" ... dont you find that strange?

Neverthe less, no one can confirm my findings of his missing page, and possible "like", so i stay in wonder...

we all know ATS position about this---

Politics aside, I can confirm he has no official FB presence at the moment. You say he had an official page (I imagine he would), but it's not there. You're right.

Any idea what this math means? "sine pi on six equals a half"

Your FB link of his deactivated page gives that description for the "about" section.

originally posted by: kloejen
a reply to: Jason88

JA is on FB! . How would he else communicate to the world?

originally posted by: Jason88
a reply to: kloejen

Politics aside, I can confirm he has no official FB presence at the moment. You say he had an official page (I imagine he would), but it's not there. You're right.

Any idea what this math means? "sine pi on six equals a half"

Your FB link of his deactivated page gives that description for the "about" section.


Lol ok--- but you are wrong. Let it slide, and lets catch some pokemons... listing WIKILEAKS here on ATS is a felony we all know... because getting to the truth is just a spoiler ? lol

I dug around a bit, he doesn't use FB personally, instead he communicates through the official FB 'Wikileaks' page (& other channels). So no FB page for Mr. Assange.

All these threats about taking down Hillary, I would hardly be surprised if something doesn't happen there.

oh man, did you just use Columbo skills to figure that out ? Of couse a main media man Gonna-be-killed by-the-west is not using a FB page, to spread his word ?

Sheejus.... did you ever put yourself in his place and figure how to communicate to the masses? ---- noo he is making a statement on the Ecuadorian embassy 2 times a year and talk his back off?

Seroiously ? - Assange is that dumb he will not use FB as a communication device ?

It is what keeps him alive! -- why is it that US officials calls for his assasination? Sick fycks!
Something is rotten...pls google ppl that want Assange dead... funny they are all American!

Ohhh this is another America basher thread ... pooor old Rome V2.0.... I dont hate america... i just despise your government! ... lame excuses to kill ppl who tell the truth... like... Manning... like Snowden...Ellsberg...Webb... and many many more.
Its time to grab the hayfork and go to the streets America... you really gonna accept the socalled choice you have "Hillary or Trump" - damn your #ing movies!

This is not about america, or russian, or vietnam ,or whatever... this is about the ball we live on - the earth!
edit on 27/8/2016 by kloejen because: (no reason given) 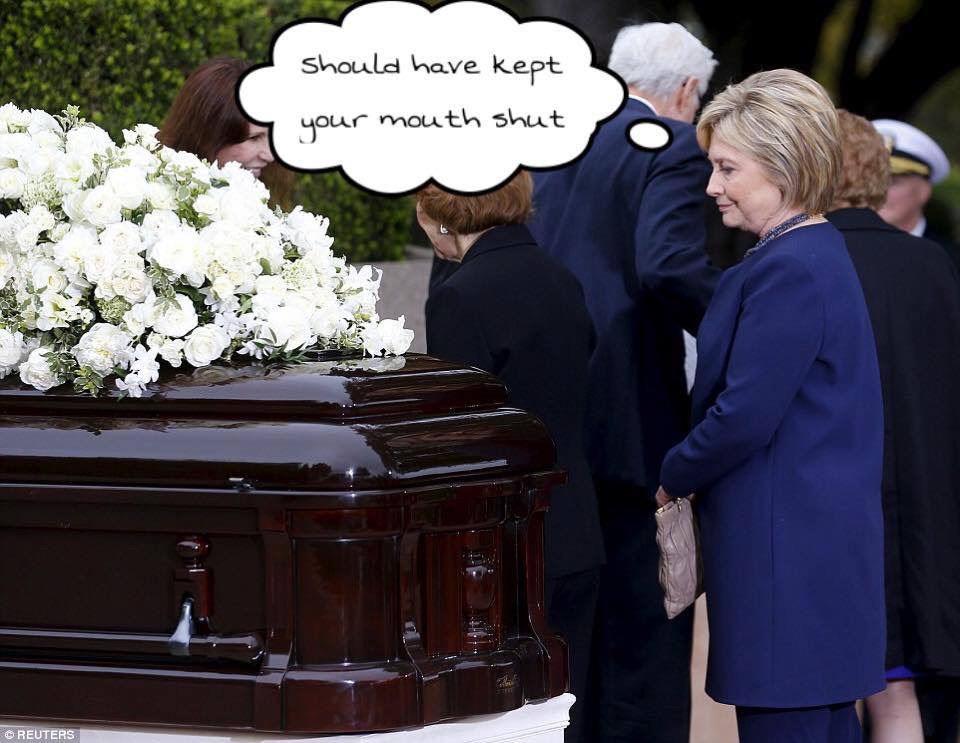 Hey man I was just trying to answer your question & provide a bit depth for dumb folks like me. I'll go back to the UFO forums. Bye.