Okay.....what if they build a brand new aircraft with all sorts of brand new things that have never been tested before, especially in electrically charged states.

And now we want you to get on that aircraft and we're going to fly you right through that really bad thunderstorm over there.

Most likely this isn't a good idea.

See, back during the moon race, this is the problem the Soviets had. They didn't have a good way of testing things like their massive rockets to go to the moon.
Instead, and because they were feeling the pressure of having to get there first, they would instead just build the rockets and the tests were to just fly them.

It didn't work out so well for them. The rocket tended to blow up on the launch pad, or just up from it. Many of the problems could have been found at a testing facility......instead of wasting all that money and resources blowing up the full sized rocket and launching facility.

You don't want to find out if there is a major issue when your people are well beyond reach and help. Better to keep testing and seeing if there is going to be a problem in the first place.

But im still none the wiser, if we know already how to safely pass the region, why not use the same , or modified tech used back then. Im sure it would be a lot more cost effective. If it was good enough to go back and forth at will, seemingly, back then, why complicate the process.


We know how to go with ease, i don't see what the issue is.

Why not simply shield modular and advanced technology we have today in layers upon layers of lead then activate after we get through the belts.

Im unsure why its taking this long to try to find a solution we already have.
edit on 23-8-2016 by odzeandennz because: (no reason given)

posted on Aug, 23 2016 @ 07:38 PM
link
a reply to: ngchunter
Excellent and informative reply with quantitative calculations. Thanks very much for clarifying this.

originally posted by: eriktheawful
Orion is not "somewhat" more advanced. It is MUCH MUCH more advanced than any of the Apollo craft were!

The instructions per second on orion are something like 6000 times more than Apollo, which sounds like a lot, but I expected it to be even more, like 100,000 times greater. The faster modern electronics are more sensitive partly because they are faster and partly because the transistors are smaller.

originally posted by: Bedlam
In interplanetary space, there's a good bit of radiation over a much longer period of time. I'd be more worried about that, frankly, than a single exposure gotten from the VAB as you dive through it as fast as you can manage.

That is a big concern for longer trips. The trip to the moon was so short it wasn't much of a worry but a trip to Mars would take many times longer. Unfortunately, most shielding against the worst form of cosmic rays is relatively ineffective and actually increases the particle count because of the "shower" effect.

But one of the big risks going to the moon was a solar flare. NASA's solution to that problem was to roll the dice and make the trip short enough to lower the odds of the astronauts getting exposed to solar flare radiation. Once again on longer trips to Mars, the odds of solar flare problems go up because of the longer trip, but at least solar flare radiation is easier to shield against. Not easy, which is why it wasn't really done for Apollo, but not as hard as shielding against high energy cosmic rays.

Radiation Problems for Missions to Mars


A thicker hull can help block lower-energy cosmic rays, but any high-powered rays can easily pass through, Turner notes. Plus, doubling the nominal thickness of a spaceship hull only reduces the threat to astronauts by about 10 percent, a number that depends on the nature of both the rays and the shielding. That extra shielding also adds weight to a spacecraft, limiting what can be devoted to supplies for science and survival.

Turner says the best way to mitigate the danger from cosmic rays won't come from shielding. Instead, he thinks the solution will come from reducing the time astronauts spend traveling to and from other worlds.

I tend to agree with Turner that the travel time needs to be reduced to reduce radiation risk, but exactly how we're going to do that isn't clear at this time.

Aside from the secondary radiation issue the other obvious point about lead is that it is very very heavy. Every pound of lead you add to the spacecraft's mass means a pound less of food, or scientific equipment or even astronaut - it would effectively make it impossible to build a working vessel purely on the grounds that you could not build a rocket big enough to launch it.


But one of the big risks going to the moon was a solar flare. NASA's solution to that problem was to roll the dice and make the trip short enough to lower the odds of the astronauts getting exposed to solar flare radiation.

This is true, but they did at least go to great lengths to monitor 'space weather' so that they could warn the crews to take whatever action they could to reduce their exposure, which frankly amounted to 'hide'.

This in-house journal from ESSA has an article describing how they monitored the space environment during the missions:

Orion, as far as I understand, will fly through the thicker layers of the belt, due to the fact that using the Earth's equatorial rotation velocity helps save fuel. 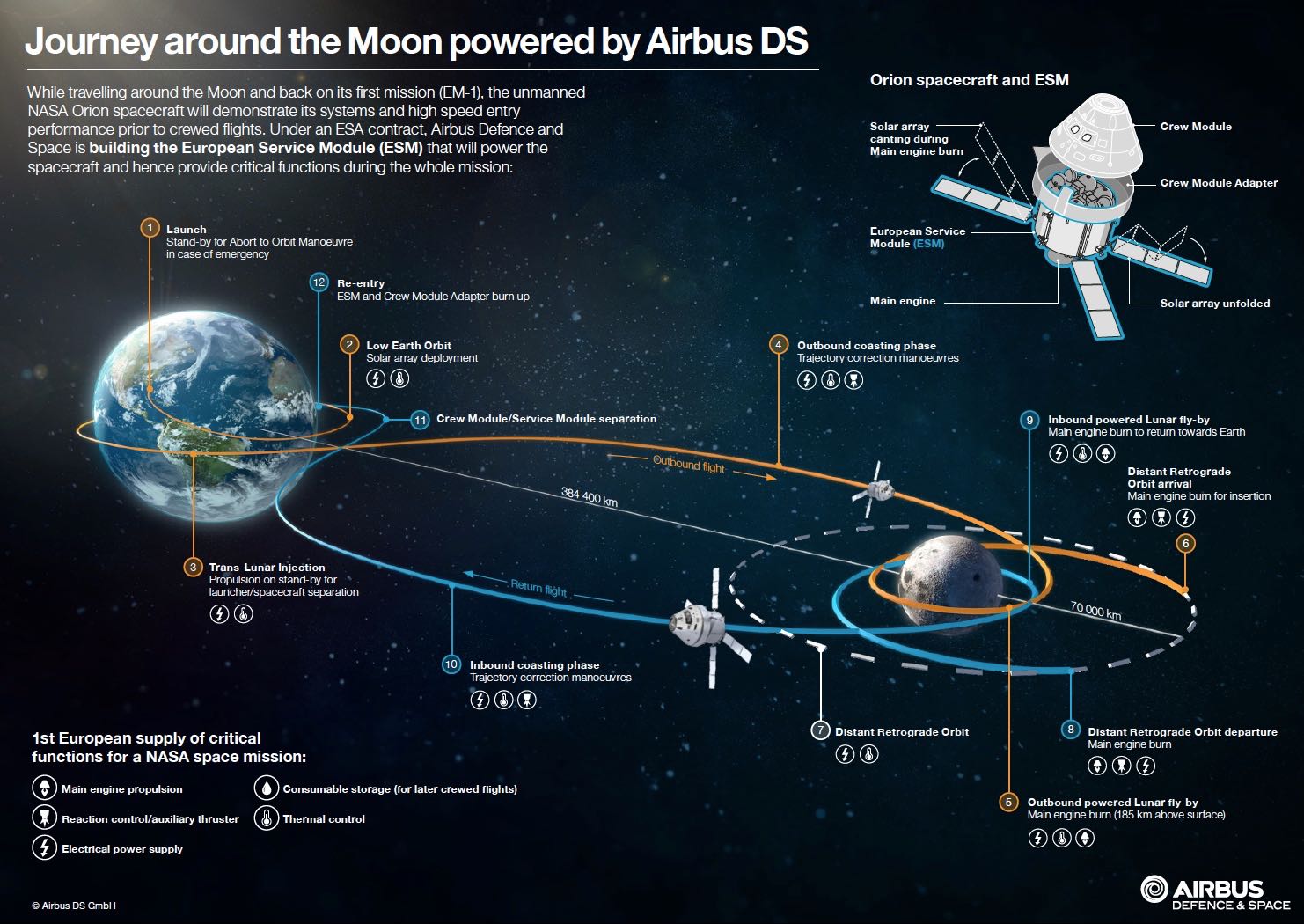 originally posted by: OneBigMonkeyToo
This is true, but they did at least go to great lengths to monitor 'space weather' so that they could warn the crews to take whatever action they could to reduce their exposure, which frankly amounted to 'hide'.

Yes, they did have somewhere to "hide" in the command module which had the most shielding, for most of the mission, but the problem was the lunar module wasn't much of a hiding place so once that separated from the command module, the astronauts no longer had much protection from particle events.

People asking about the Van Allen belt radiation seem to have no clue what the real risks were in the mission, but this will give them a clue. 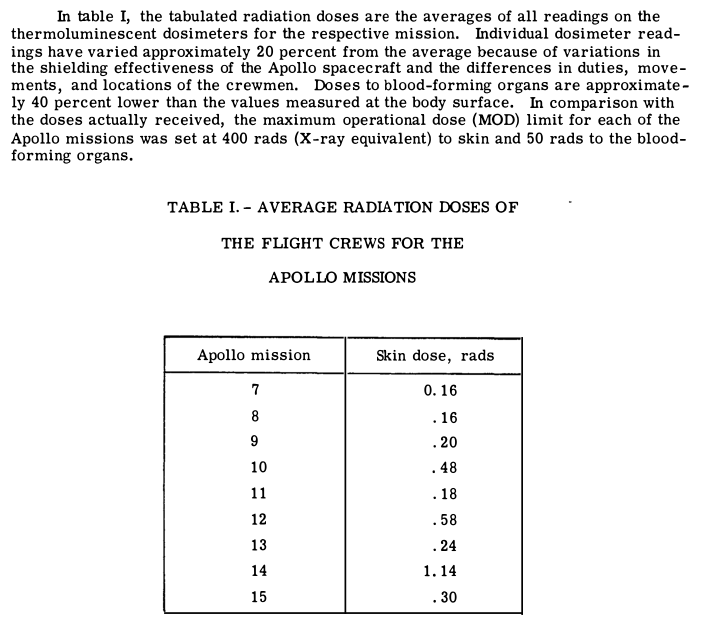 It says the MOD or maximum operational skin dose of radiation was 400 RADs, and by some calculations some particle events could have exposed them to up to 280 RAD skin doses on the moon. Compare that to the actual approx. 1 RAD or less they actually got, and we are talking about an increase of roughly 280 times of what they actually got, including passing through the Van Allen belt twice. So the Van Allen belt wasn't the biggest risk they faced by a wide margin, it was the possibility of a 280-fold increase in exposure. Once on the moon I'm afraid all the monitoring could tell them was that they were about to get "fried" radiation-wise, though not to a fatal or lethal dose, but 280 RADs is more than you really want to get.

To put the 400 RADs limit in perspective, over 1000 RADs in a short time is almost invariably fatal, so the 400 RADs might not have killed them but it sure wouldn't have done them any good.

Now to put this and the orion radiation testing in perspective, look at these particle radiation events that occurred between some of the Apollo missions, they just got lucky and missed them. On a longer mission I think it's obvious you can't rely on luck, you need better shielding and Solar flares might be a bigger concern than Van Allen belts, they were on the Apollo missions but NASA's gamble paid off and they got lucky as this shows: 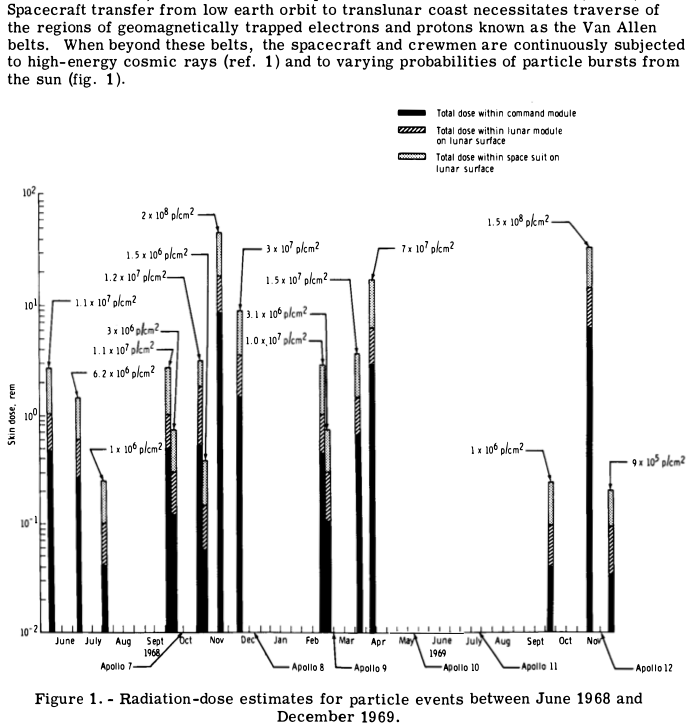 Had any of those events (the columns showing particle events) occurred when the astronauts were on the moon's surface, they would have got much more radiation than they did, and the Van Allen belts would have been negligible in comparison, but even so they probably would have survived, though they might have got sick from an intense particle event.

edit on 2016824 by Arbitrageur because: clarification

Same way they avoided it on the way out.

The separation of the LM & CM occurred c. 11250 miles out roughly above the equator. Their trajectory took them to a re-entry interface at 23 degrees south of the equator, so they would touched the edge of the higher radiation flux area but not passed directly through it.

originally posted by: odzeandennz
Thanks again both for clarification.

But im still none the wiser, if we know already how to safely pass the region, why not use the same , or modified tech used back then.

It's incredibly crude by today's standards. Apollo's computer, while an achievement for 1968, had less computational power than my toaster.

No one does things that way now. You couldn't get the parts.

Why not simply shield modular and advanced technology we have today in layers upon layers of lead then activate after we get through the belts.

Im unsure why its taking this long to try to find a solution we already have.

Last design I did for MSFT, we were drilling holes in the supports to save grams. Every ounce costs an ungodly amount.

LOL, change MSFT to MSFC. We've put several designs in space through Marshall while we were in business in Huntsville.

You made a great analogy without even realizing it. Say your modern car with a smartphone app that allows you to start it remotely gets struck my lightening, chances are you're going to have to tow it to a dealership and pay thousands of dollars to get it running again. Your electronic fuel injectors may be damaged, the computers that control your transmission, engine and just about every other component in your car has probably suffered damage. Now your 1970's carbureted rust bucket gets struck by lightening, maybe your radio won't work? That's the point, the more complex the systems, the easier they are to damage.