I was travelling East along the A66 approx 8 miles from Scotch Corner when i noticed a cluster of lights on the South West horizon, I think looking towards Skelton. At first i thought the closest resemblance i could think of was a squadron of helicopters with lights on. However after a good few miles they hadn't moved at all and i managed to take a photograph and video. It wasn't a great day for visibility and i couldn't make anything else out other than the lights and their apparent lack of movement. I was mystified at the time and still am, especially after seeing the video again. Lanterns, flares etc have all been suggested but the absolute lack of movement still leaves me skeptical of this explanation. I eventually lost sight as i passed over a hill and couldn't see the same patch of sky. 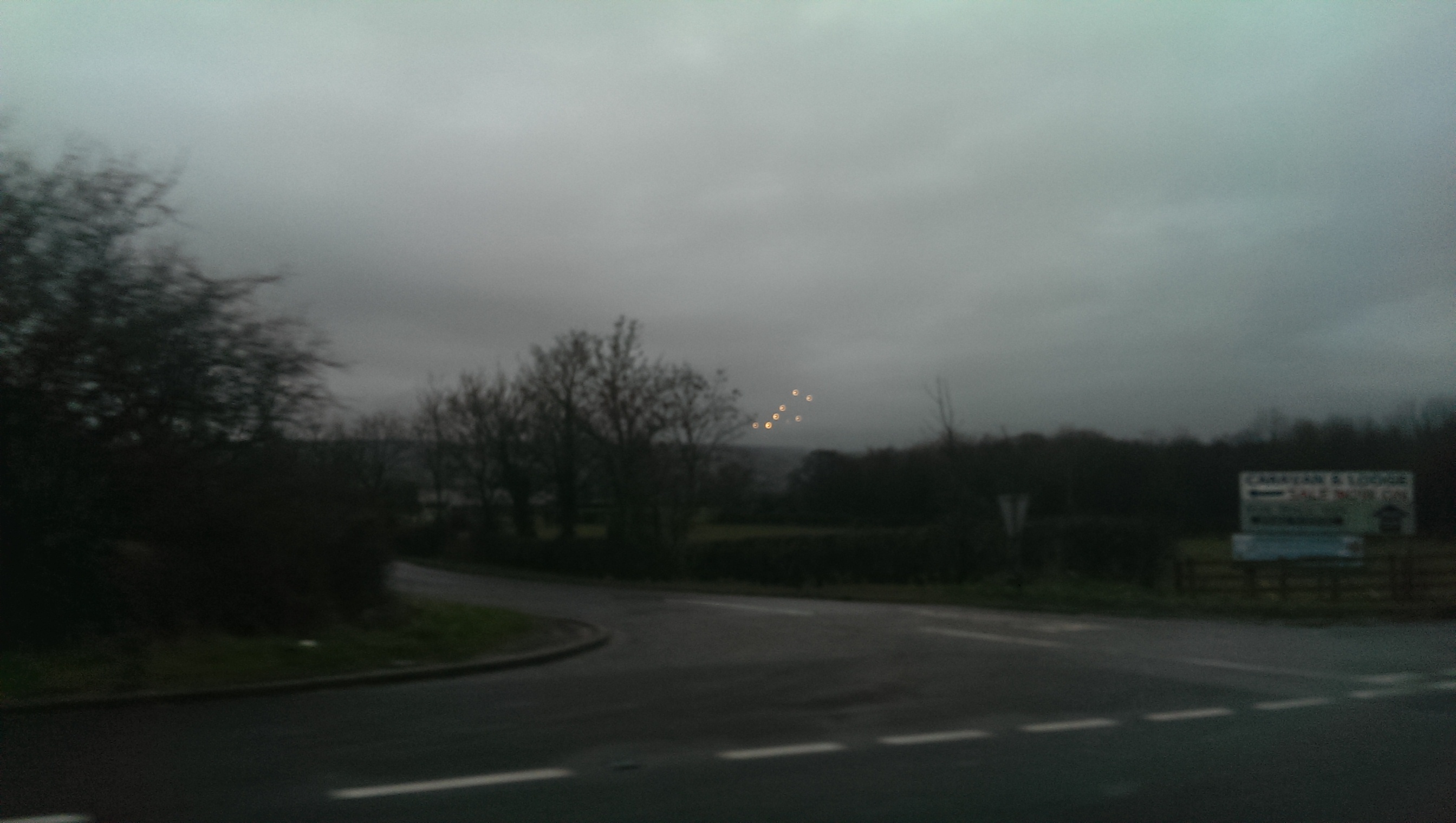 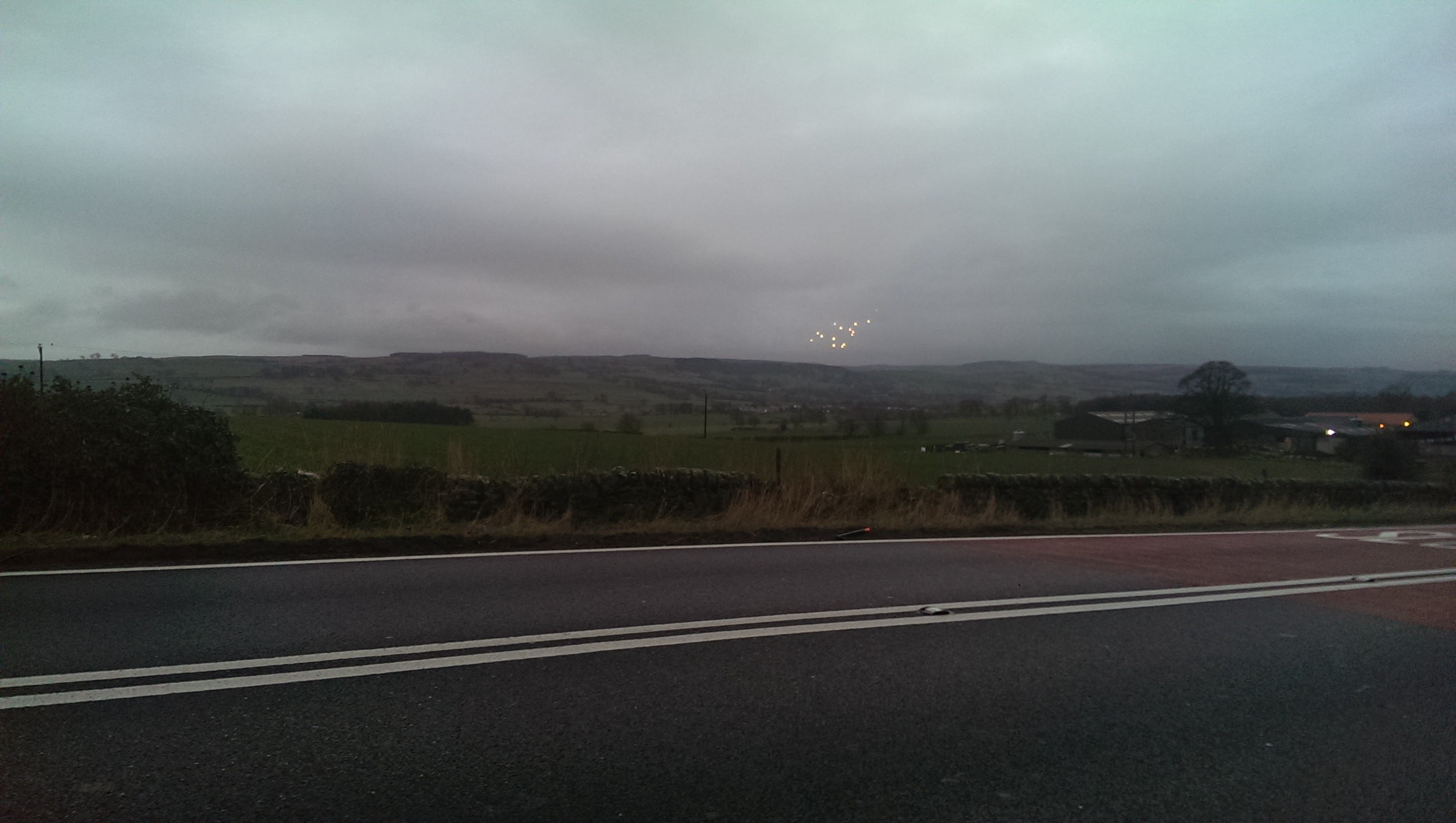 More pictures and a video on Mufon - just search the case number.

They admittedly look like a group of Chinese lanterns, however no movement was observed/reported.

Is there anyone from the area who has also seen this?

Is there anyone with a suggestion of what these could be?

EDIT: Check the video on the site - this is not reflection.

posted on Aug, 23 2016 @ 07:17 AM
link
Definitely could be lanterns. From the pics they could be flares from a jet too...but I found the video and, well...they don't look or behave like flares. That's a very interesting find.

Very nice pictures for a change!!!

posted on Aug, 23 2016 @ 07:29 AM
link
a reply to: and14263
Hmm, Pic 4 appears to show at least one bright light of the same size, shape and colour on the far right right next to or as part of a building. There may be others obscured from view by the building itself which does throw up the possibilty of reflections? If you zoom in on the lights in pic one they do look a little like reflections of lights.

I agree they may be reflected and are showing on the inside of the car window. Take a look at the video though, this goes against this a little.

a reply to: Caver78
I've acknowledged this, thanks for spotting.

The first picture, the lights look as though they could be a reflection.
Also this could be some sort of dwellings on a hill that is foggy or clouded.

The fact that they reported it to mufon rather than post a YouTube video with European dance music in the background adds a bit of weight but personally I don't see anything here with the wow factor.. I'm sure there is a reasonable explanation..

Dwellings or maybe a load of lighted pylons up a hill...

originally posted by: butcherguy
a reply to: and14263
Picture #3 seems to show the lights through a tree branch, where the branch ought to be blocking the light. Something seems off there, IMO.
I am not a photo-analyst.

Is there a streetview image on Google Maps with a clear sky? It could be a village on a hill?

I'm open to that idea but I doubt it is the correct solution.

The clouds are visible behind the lights, that is not fog. The lights are bright and do not show signs of being fogged over.

posted on Aug, 23 2016 @ 08:00 AM
link
Wasn't trying to be a S#%!, it's just you asked for someone to come forward and they may have given up on anyone caring about their sighting after all this time?

Would be cool if someone on ATS local to the area could take comparison photo's ?

If there is a village or building on a hillside across the valley it would be evident.

What highway is the picture taken from?

originally posted by: and14263

Sorry, wasn't having a go.

Pic 4 looks really amazing and I dont have idea what it could be. Lights looks very big at the sky, so IMO latterns aren't there.
I am thinking about where lights are hanging. Over the city, or over the mountains?

Ugh, I can't link the image from my profile on my work computer, but he re is a Maps link... fairly clear sky and no mountain... so much for theories...

I saw A66 in the original but was looking for a cross street... saw Ravensworth Nursery sign in the video and narrowed it down that way...
edit on 2016823 by bonsaihorn because: Clarify

I've driven that road plenty of times. There are street lights, service stations and villages all over the place and some are on the hills.

The colour of the lights would indicate street lights or service station lights.
edit on 2382016 by TerryDon79 because: (no reason given)