Well, my memory is playing tricks on me. Thinking back, I haven't seen the original SW movie since it was on its original theatrical run, and I was only a small child at the time. So it's far more likely that I am misremembering something.

And I think I know what that something is.

The Kenner-manufactured 'action figure' of C-3PO didn't have one silver leg. (Obviously, what with being a cheap bit of plastic that wasn't worth the effort of two different colours, one of which would only cover a tiny part of the figure).

Since I didn't ever see the original SW again, and did get given the C3PO action figure for Christmas that year, it looks like the infant me misremembered the movie, due to the action figure.

There, that took a bit of working out, but I think I've nailed it.

Now all I need is someone to tell me that the action figure did in fact have a silver leg, and I will be fit for the funny-farm.

originally posted by: Pearj
It never ceases to amaze me when someone remembers it correctly - gets freaked out - then convinces themselves how their memory is just a series of mistakes.

Well, memory isn't like a photograph. It's more a set of impressions strung together. Case in point: Until last year, I had a vivid memory of watching a TV programme in colour, when I was very young. Dad's Army, for what it matters. So this memory is decades old.

Except, as I subsequently remembered, we didn't have a colour TV till much later, and the first programme I watched in colour was something different (The Muppet Show, since you asked).

I had both these memories in my head at the same time, and hadn't noticed the contradiction. My memory had sort of retconned colour into the earlier memory, and I had never given it a second thought. (The earlier memory was definitely true, btw, just 'fixed during postrpoduction').

Ever heard of Elizabeth Loftus? She did a very famous study on creating false memories. And to prove they were false memories, she made people 'remember' impossible things. The example that I always remember (!) is that she took people who had definitely been to Disneyland, enrolled them into her study, and then convinced them that they had seen Bugs Bunny at Disneyland (an actor dressed up and greeting crowds, I mean).

I expect that those participants are somewhere on the internet, right now, claiming that Bugs Bunny used to be a Disney character rather than a Warner Bros character, and oh my God, don't you see, this is cast-iron proof of the Mandela Effect, etc.

And you can continue to bury your head in the sand.

originally posted by: Pearj
a reply to: audubon


you are stuck on thinking the only argument against your delusions is faulty memory.

IF you spent as much time as you do searching for spelling mistakes and typo's on actually learning about how the human mind works, how we perceive things and what and how this perception can be affected and how its related storing and recalling memory you might as open minded people say "wake up" to what the Mandela effect actually is.

I guess this is your obsession and the only way you might break free is if you can take a step back and look at things from a non biased view.


It also makes me think there are way more Effected than skeptics think.


You are playing someone else s game and you have no clue what the rules are, how to play or that you are actually playing.

You have been manipulated, you don't know how your own mind works so you need comfort in something that touches base with what and how you are perceiving reality at any given moment.

Sounds like you got us all figured out! lol

posted on Oct, 21 2017 @ 02:45 PM
link
Hello
I recently discover the Mandela effect and while learning about it. One of the things was the location of the heart. Now I have a heart condition and have to go for echocardiogram all the time. A few years ago they changed the way they look at my heart. Before they used to look more at the left side. And to put this into perspective I have then every 3 months. When the change happened I did not thing much of it just an odd note and happy to not have to clean the sticky stuff from under my breast. A few days ago I asked my nurse who does this exam all the time about the change after reading and watching a few videos on Mandela effect. Her response was why would we do that your heart is in the center. I remember years of it being on the left side and having to deal with the goop every time I got the echocardiogram.
If you could message me that would be great I kinda think I’m going crazy.
Thank you,
Danielle
edit on 21-10-2017 by DBourgeois because: Misspelled word

It used to be popularly believed that the heart was on the left-hand side of your chest, because, well, it is. It's just that it's not so far to the left as common knowledge had it. 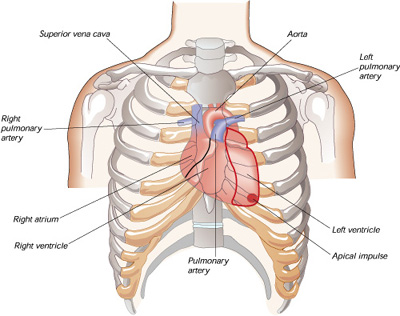 What you can see from the above is that even though the heart sits at the centre of the chest, most of its bulk falls on the left-hand side of the breast-bone (sternum).

If you prod your own chest on the left breast area, then on the sternum area, it should become clear at once why you get a clearer result from the latter than the former. Simply put, there's less body tissue in the way.

This is something I remember as one of those "Did you know..?" type facts from growing up. But it seems that it's only recently that medical schools have started teaching heart docs that the centre of the chest is the best place to take readings.

You haven't observed your heart change position, and you're not going crazy. You've experienced an older generation of clinicians get gradually replaced with a younger generation, with better information and practices.