So, Time Travel or Alternate Dimension....What Is This.

page: 1
27
<<   2  3 >>
log in
join
share:
eriktheawful
+7 more
posted on Aug, 8 2016 @ 03:37 PM
link
We've had some great threads discussing subjects such as Time Travel and Dimension Crossing here on ATS, who's threads I've really enjoyed whether I believed in them or not. That's the great thing I like about ATS. Everything from the Hipster photo to the Taured Man has been some entertaining material.

What happens though when it happens to you? I don't mean you actually time travels or crossed dimensions (ME threads), but come across something that completely blows you away and you're not 100 percent sure of any answer?

That happened to me today while working on a project. I'm not making any wild claims......but I will fully admit to thinking them! The answer is most likely very mundane. Still, how about I show you something that is not only NOT something about Trump or Hillary, and is not me claiming my my rib cage is different from where it used to be...

How about something with some good old fasioned photos? Here it is:

So I've been working on a massive project over the past year: scanning all of my photos and my sister's photos, so that they are not lost. Too many over the years have disappeared or gotten destroyed.

One set that I was scanning today was photos from my parent's 20th wedding aniversary back in 1981 when we were living in Bangkok, Thailand. They decided to renew their wedding vows.

I was 14 at the time, and you can see me in this pic here, wearing the blue suit: 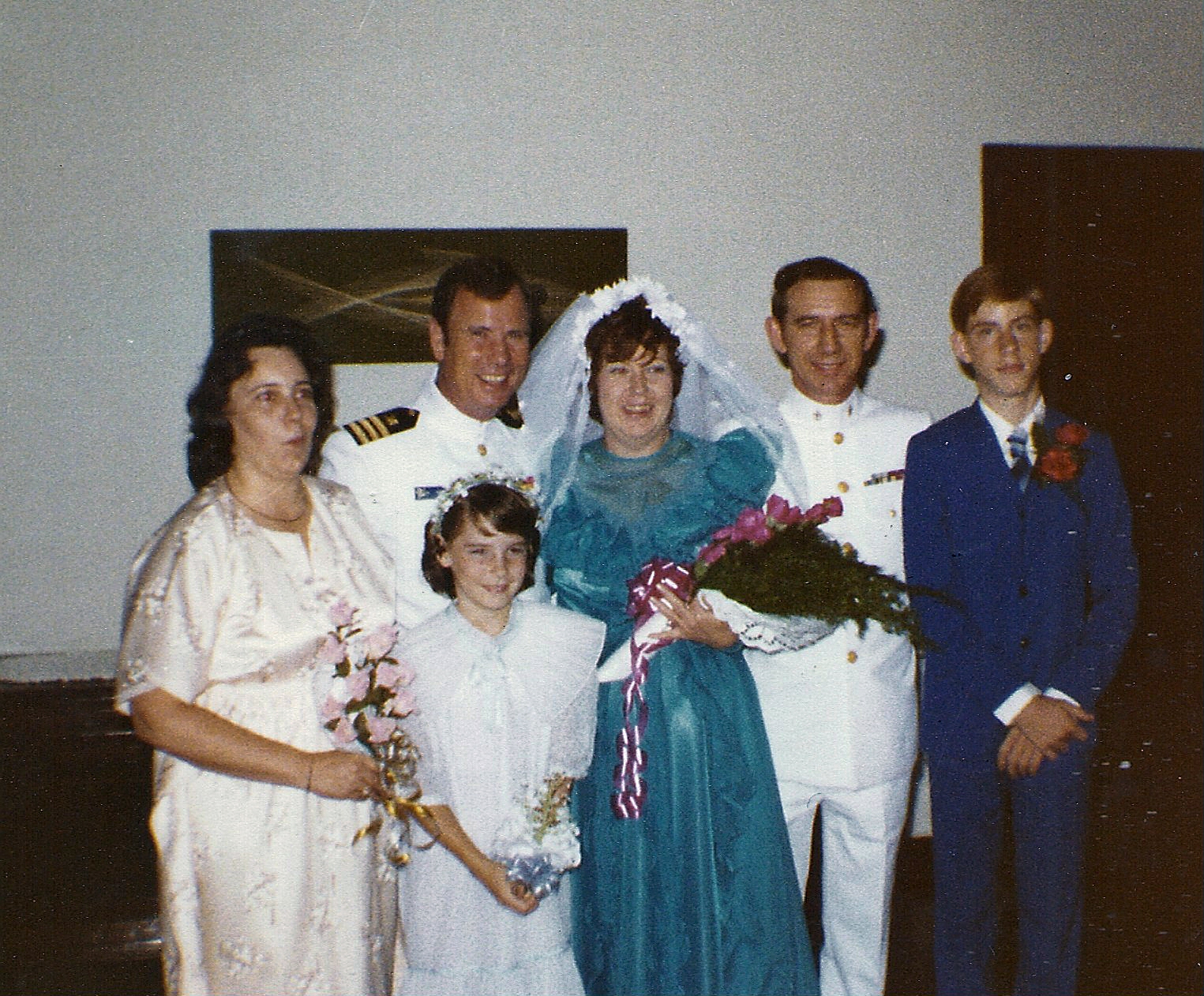 My dad is standing next to me and my mother is in the blue dress. The little girl is my little sister, and the couple next to us is the commander and his wife who hosted my parents wedding.

Now, here is another pic......notice the individual at the bar behind my mother who is wearing a blue patterned shirt and black pants: 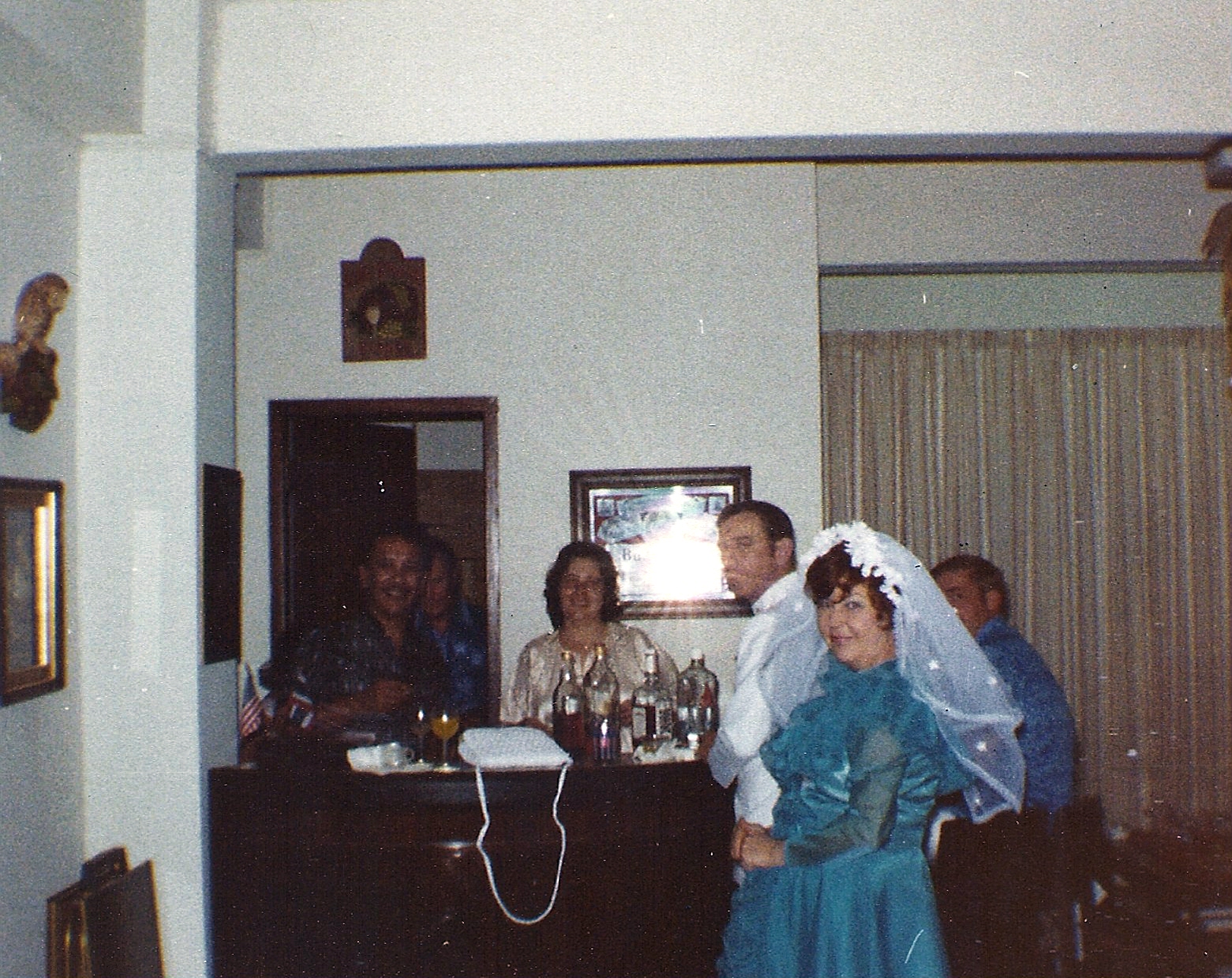 I had a "WTF?" moment....so I scanned the picture zooming on on the guy: 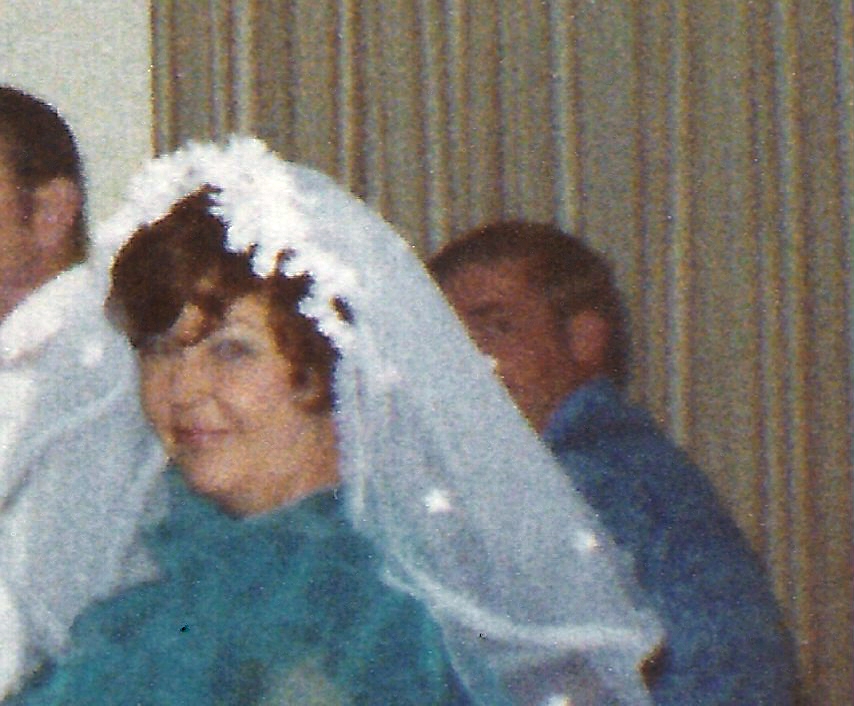 I started hearing the theme to the Twilight Zone.....that looks like an adult version of me, abet younger than I am now. Here's what I'm talking about: 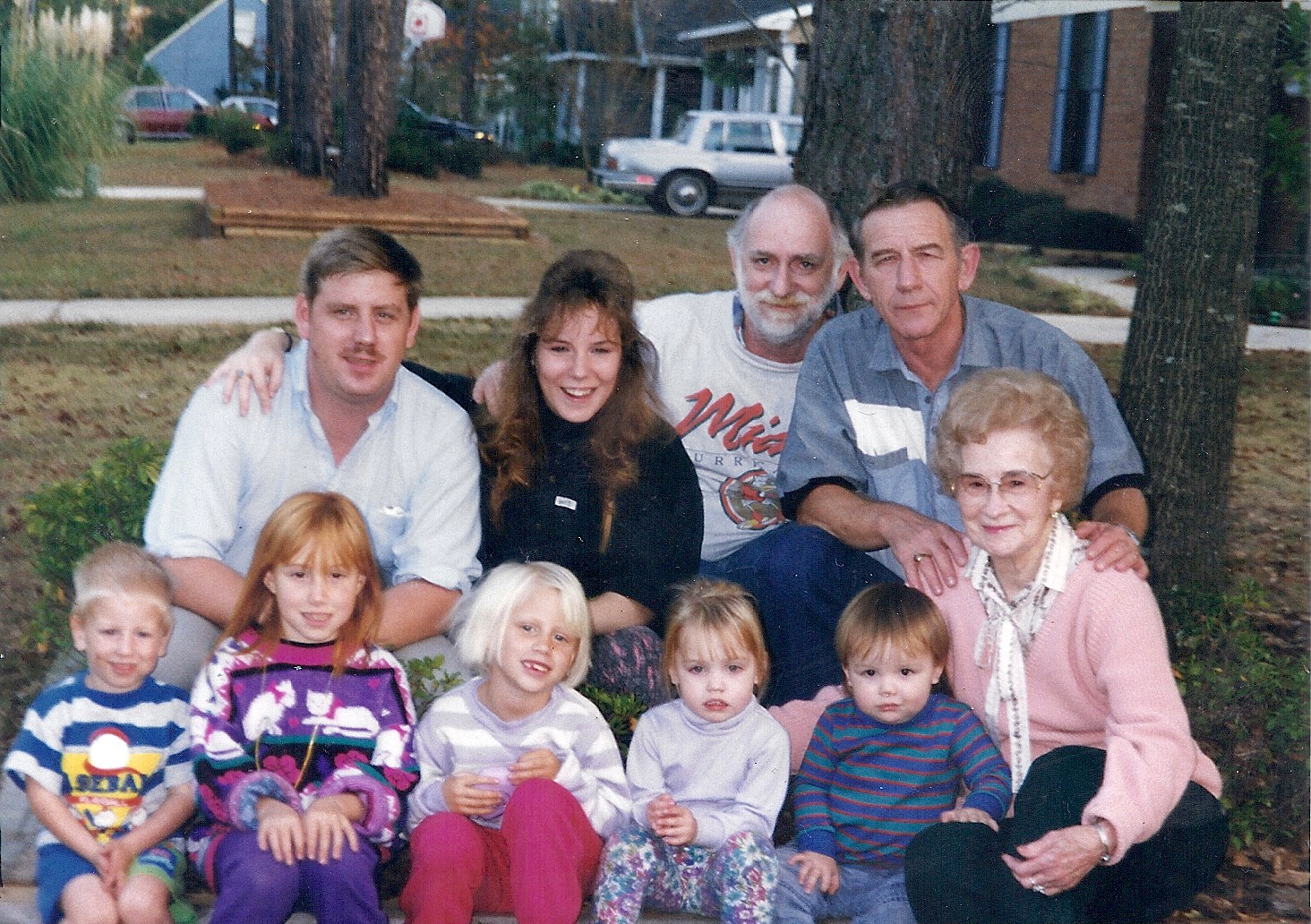 In the wedding photo, I have NO idea who that is, and they are not in any other picture. It certainly was not my 14 year old self. My sister has no clue either (and freaked when she saw it). It's not my father either as he's standing to the right of my mom in his dress white uniform still. Unfortunately both my parents are no longer around to ask.........

It's obviously a picture of someone who's whole face would not look anything like me and mere coincidence.........

posted on Aug, 8 2016 @ 03:46 PM
link
Here is another pic of me holding my oldest son, I'm much younger than now of course, but if you look at the hair....hair style, etc.....you might understand why I was taken aback when I looked closer at the picture.

I'm not claiming that's me in the picture....I think I would have remembered time traveling.....I think.... 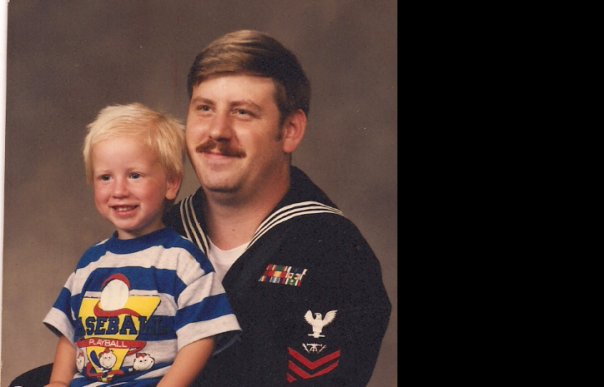 Interesting, the photo has similarities of you but slightly older.

Reminds me of a movie i watched where the photo changed and the guy in the movie watching his own birthday party as a child, saw himself but much older lurking in the background.

I really enjoy the time travel theories though.

posted on Aug, 8 2016 @ 03:49 PM
link
Do you favor an uncle? Perhaps one of your uncles showed up and you just don't remember him being there. It does look like you.

Do you remember the two blokes in the second pic coming through the doorway wearing the hawaian shirts, perhaps he was connected to them somehow? Spooky though, i love spooky pictures.

All the faces in the 'mystery' photo look kind of... skewed, when compared to the first one. Different camera setting, lighting, different camera?

The chap in the blue shirt i would say looks to be in his 30's.

When you where in your 30's do you remember travelling back in time to witness your parents renewing their marriage vows?

That is the easy way to answer your question?

If that's not a family member that you know of, it might be the dad you don't

posted on Aug, 8 2016 @ 04:00 PM
link
a reply to: eriktheawful Noses and ears grow with age. Your ears are longer then the older guy in the picture. Its not you. Who are the guys behind the bar? workers? servers? Are they wearing blue shirts and black pants too? If so it may be their uniform.

S&F For leaving Trump and Hillary out alone

I will say this, the ears on the person in question are smaller than yours appear to be in both pictures of you (when you are 14 and when you are holding your son) but the resemblance is striking and also the angles are of course different.

Great find though... I know I would certainly have a twilight zone moment.
edit on 8-8-2016 by DrumStickNinja because: (no reason given)

posted on Aug, 8 2016 @ 04:04 PM
link
This happened to me back in 2006,it was about 6.30 in the morning and I decided to get milk and the newspaper,I went to the shopping centre and the old supermarket wasn't there in its place was a brand new shopping centre. I was surprised that I couldn't remember it even being built but nothing was open so I went to the 24 hour service station instead.When I got home I read the paper in it were stories about US and Australian atrocities in Afghanistan government corruption etc,I thought my God somebody has taken over Rupert Murdochs local rag and printed the truth,then the paper went a golden glow and rewrote itself back into the usual rubbish you'd expect from a Murdoch paper right before my very eyes.Later that day I went back to see the new shopping centre but it wasn't there the old supermarket was back.

One year later they built the new shopping centre it looked exactly like the one I had visited 1 year earlier.

Since then ive been aware of many changes for example the song Crackerbox palace used to be a John Lennon song now its a George Harrison song.

posted on Aug, 8 2016 @ 04:07 PM
link
a reply to: eriktheawful
I see it. That looks just like you. Very cool but strange. I thing you time traveled back to be at the wedding for some reason. Great thread!

You were a good looking kid. Where did it all go so wrong? lol I kid, I kid.

I don't really see too much of a resemblance, I'm trying to compare ears and hairlines et-cetera though there isn't too much to go on and these are the only pictures I've seen of a young you - and you look different in each picture lol. Maybe he just came for some wedding cake?

Edit: You actually do look a bit like him now that I've seen the pic you uploaded in the other post lol. I'm going to ask you this once, and I want you to be straight with me. Do you, or have you ever, owned a time machine? Do you have plans on building one?
edit on 8/8/2016 by BelowLowAnnouncement because: (no reason given)

Some random guy from the 80's has just become a meme for the ME community!!!

You DO share the lamb chops though. Lamb not mutton chops! Big difference!


Reminds me of a movie i watched where the photo changed and the guy in the movie watching his own birthday party as a child, saw himself but much older lurking in the background.

Do you remember the name of that movie? Sounds like my kind of creepiness

About the photo, perhaps in the near future there is a cure for ageing found right around the same time that time travel is invented and that is the future Eric going back to see his parents again. He tried to be incognito but got caught in that one photo and that's why it kinda looks like he has an "oh crap" look on his face

originally posted by: thinline
i will be that guy.....

If that's not a family member that you know of, it might be the dad you don't

You beat me to it. If you time traveled or even astral projected yourself, Op, I would think you would remember this. Obviously, you have already checked out uncles, so that does leave a possibility of a family friend. Yes, he may be your daddy, so that is why the ears are slightly different?