Source
-Rebels who lay down weapons or release hostages will be given amnesty, official news agency says
-Russia says it has launched a large scale operation to open humanitarian corridors to Aleppo
-The UN's envoy on Syria says he hopes peace talks can resume at the end of August 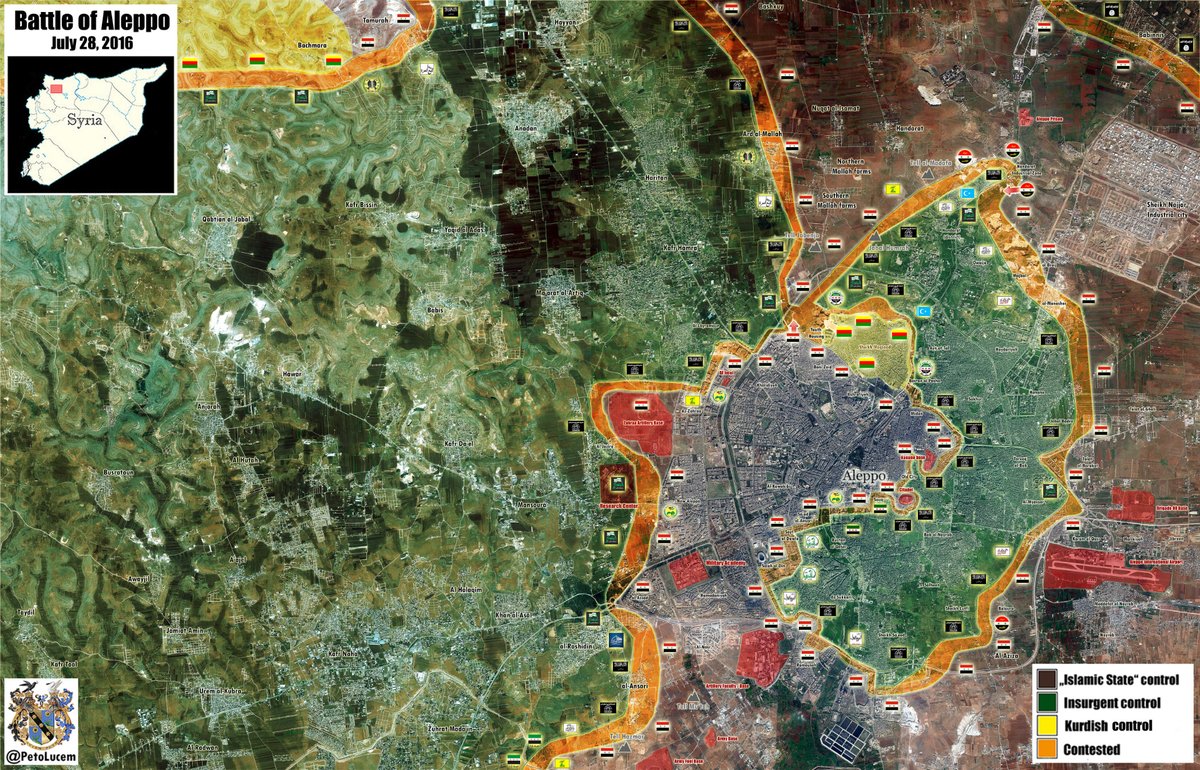 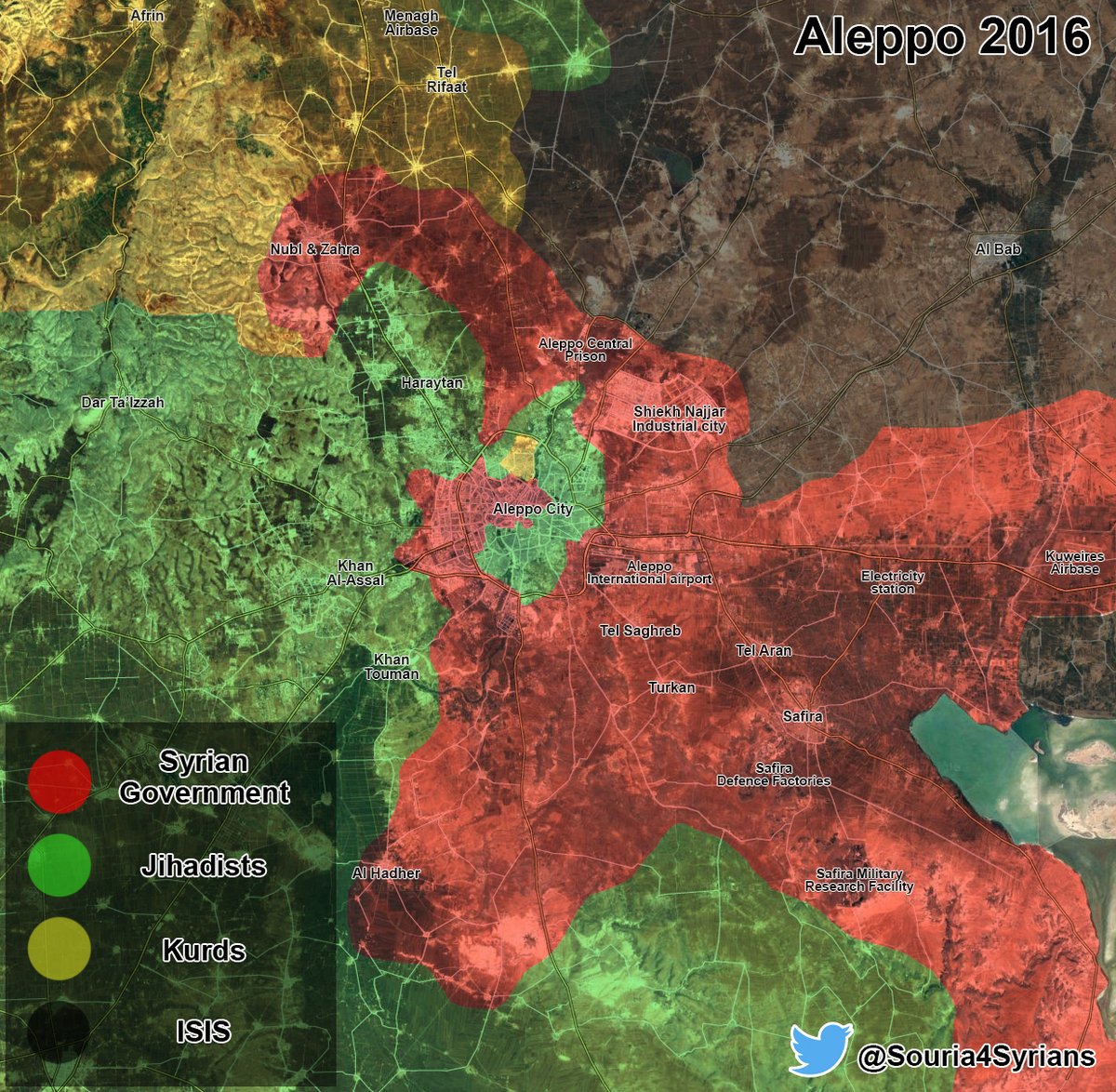 Assad has been giving opportunity for Civilians to escape from the encircled areas. Now unless they break the Siege which is unlikely, the Rebels within the encircled pocket is doomed. From what i can say ALNusra has absolutely no chance of breaking the Siege. They would require NATO Air support along with with plenty of Armor and Artillery. As of Right now, there is no way Nusra is getting extra heavy weapons and SAA is far too powerful and not to mention Russian fighters and gunships in the area. Nusra has been trying to break the Siege for sometime now and they are launching suicide attacks with the precious few Armored Vehicles that they Have... Around 4 Failed attempts as of now

lenta.ru...
As per Turkish FM Russia and Turkey could announce plans to jointly fight ISIS at their meet on Aug 9

Check the Videos in the above twitter Handle, you will see Alnusra loosing a lot of Armor in a desperate bid to break the Siege

The defeat of gulf state-backed terrorists in Aleppo should take a lot of pressure off of the Syrian Government and it's allies, and allow them to focus on recovering more territory currently held by other terrorist groups. It's been a major theatre and terrorist strongpoint for years now.

It'd also be a massive morale boost to the Government forces, which has been pretty low since their offensive towards Raqqa went quite badly. Obviously it'd have the opposite effect on the morale of the terrorists.

Don't think peace talks should be considered at all unless they include the total and uncoditional surrender of all groups hostile to the government. The Secular Al-Assad Government should not negotiate with Islamic radicals.
edit on -050009am7kam by Ohanka because: (no reason given)

Good news and good to see finally happen .The last SF report showed that it was only a matter of time for the noose to be put in place .

Such a tragedy that its taken this long.

What the West has done in Syria would be equivalent of Russia and China arming, funding, training and recruiting BLM against the US government and in the process killing almost 500,000 and displacing millions.

Once again (like Afghanistan, Iraq and Libya), the West hast committed war crimes and crimes against humanity.

posted on Jul, 28 2016 @ 10:40 AM
link
Yup, and so many Americans either are totally ignorant of what is happening, or are so brainwashed that they really think that the west is doing this in the name of human rights and stopping a dictator.

I'm not so sure about that. I think the Propaganda war against Syria is one of the few that failed miserably. I've only met a handful of people (Americans, and not "alternate" or "enlightened" people either, just regular folk) who are in favour of current US policy in Syria.

Most seem to favour either pulling out entirely, or helping the Government. They may not like Al-Assad, but recognise the reality that it's either him or the Islamic State. Something the administration seems blind to.

Of course this is all anecdotal evidence, but i think we saw the propaganda war fail in the public backlash of Obama's planned attack on the Syrian Government following lies about their alleged chemical weapons usage.

"Moderate Rebels" my ass. When will this lie finally die?

I bet this was the secret deal Kerry struck with Lavrov.
Is the U.S. finally giving up support for the radical islamists?
IF so, then there is hope on the horizon for the people of Syria.

originally posted by: Ohanka
I think the Propaganda war against Syria is one of the few that failed miserably.


Yeap, despite all unscrupulousness and impudence:


originally posted by: MrSpad
Russia is not even ready for a long term campaign in Syria which is why they now back the US plan to have Syrians decide if Assad stays or goes. And we know that means he is gone. Russia is simply nor prepared to maintain a long term campaign to prop up Assad. The entire adventure has not gone as planned.
…
Russia has way to many problems right now to try and prop up Assad. If it can get out with some arms deal it will be happy.


So, didn’t you know about “the US plan to have Syrians decide if Assad stays or goes”?
In truth, these talking heads never hid their intentions:
Presidential candidate Clinton says removing Assad in Syria is No. 1 priority
Clinton: "The world will not waver, Assad must go"
Assad must go, Obama says

Or even more blatant:


originally posted by: MrSpad
Russia is not bombing ISIS just other rebels. And irony is that the largest group of foreign volunteers in ISIS comes from Russia as Russia has been letting them leave and join in droves. Sure they may end up killing Assad but, they are out of Russia and causing problems for the US. Also note where the weapons ISIS carries comes from. Give you a hint the AK47 does not come from the West.

It's not blatant, it's flagrant.

The first bolded phrase is a fib (proof 1, proof 2; and per capita stats: Belgium has contributed the most fighters to the so-called Islamic State of any EU nation on a per capita basis, so I wonder wether NATO gave some pocket money and waved them goodbye).

Next, the truth about AK-47s:
The US has lost tens of thousands of AK-47s in Afghanistan

The Pentagon has lost track of about 190,000 AK-47 assault rifles and pistols given to Iraqi security forces.


So, one must be very lazy and withdrawn (thanks to cannabis and daytime television) to believe such flagrant propaganda (as cited above). But, apparently, those propagandists have underestimated the common people.
And it's really inspiring.
edit on 28-7-2016 by JedemDasSeine because: (no reason given)

Calling Al-Nursah front moderate is a stretch.... There is no one in Syria worth backing. Anyone with money and half a brain already left.

posted on Jul, 29 2016 @ 07:33 AM
link
the real reason for Aleppo is successfully under Anti-Jihad siege
is because the Jihadist manpower/ranks of able bodied males has been diverted to the EU Refugee inundation
and the resulting incidents of terror-anarchy-insurgency

AND to a lesser extent the flood of Syrian Refugees into America
(under both DHS>Immigration agency... and under UN Orders which Obama quietly agreed to bring in an additional 10k Syrians selected by the EU autocrats)


And Hillary has promised, if elected, to increase the 'Syrian Refugee' rabble into the USA by 550 %
as a policy of immediate importance ( likely a joint "Executive proclamation" of OPEN Borders & Increased Resettlements in "strategically selected" Sanctuary Cities).... and as pointed out at her democrat coronation, She will doggedly 'see the two projects get underway' at lightning speed...
edit on th31146979611829412016 by St Udio because: (no reason given)

A great short video and worth a watch on Al-Nusra and their backers youtu.be...

UK, France and everyone else should STFU.

Assad letting civilians out the city as we speak and even giving safe passage to the rebel scum who want to surrender (which is more than id do).

If the civilians dont leave then frankly its on them and when the times up Assad and Russia are in there full rights to bomb the city into oblivion, even deploy chemical weapons to annihilate the terrorists still in there.

As per Rebel media itself, this is the largest offensive in 5 years and they seem to be trying to use everything they have. IF Syrian Army can resist this attack, this will end up becoming the largest graveyard of the Rebels.. 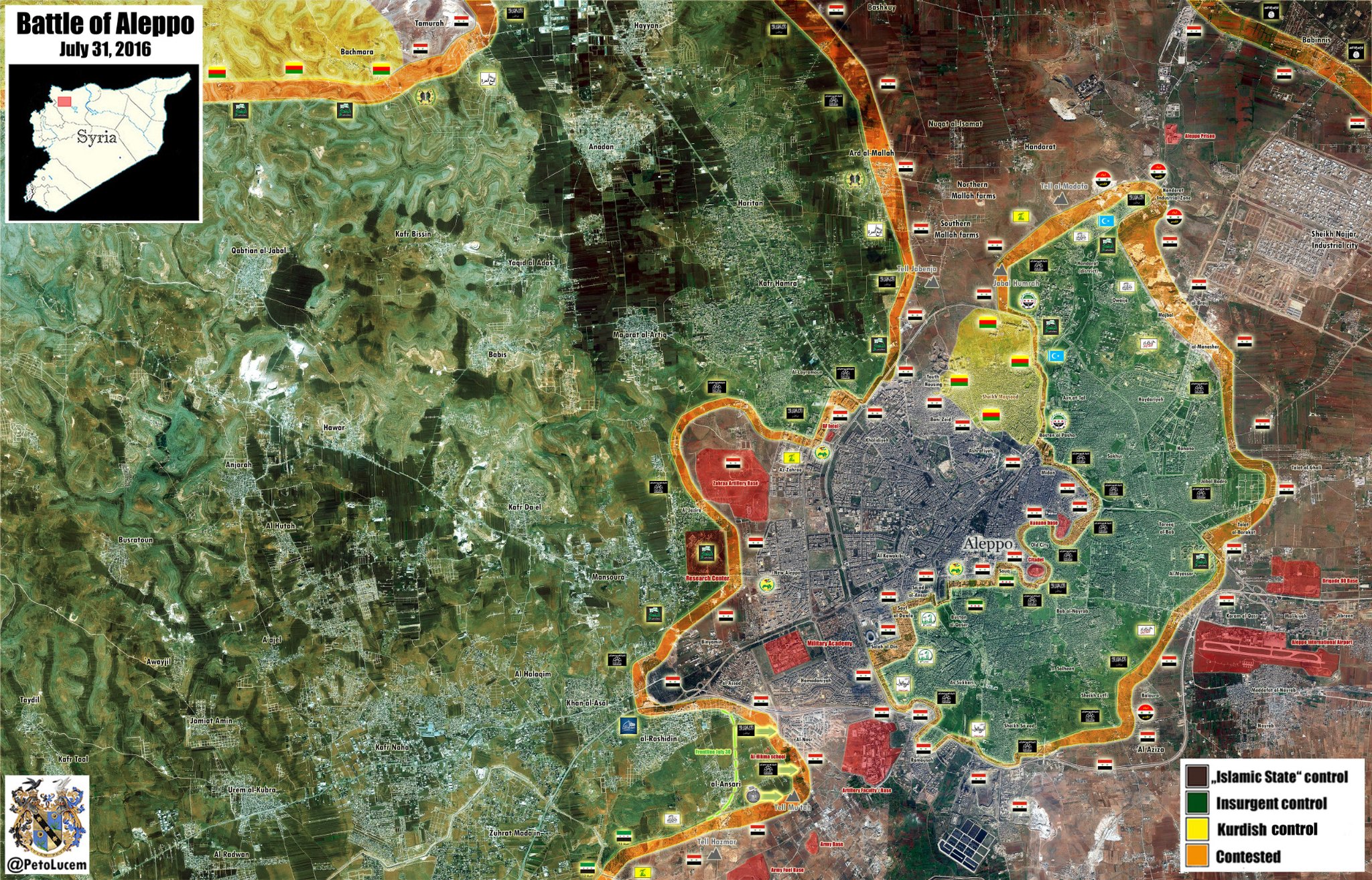 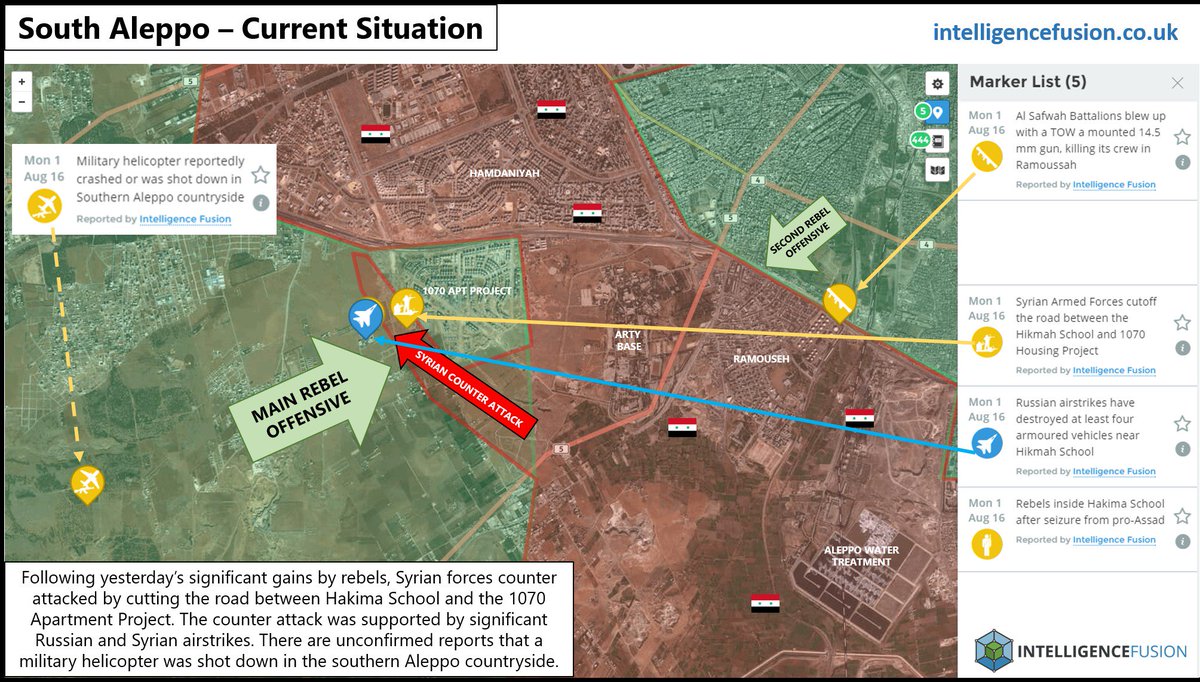 SAA counterattacks, The Rebel offensive on Western Aleppo itself seems to be surrounded. As the Russians call it "The Couldron".

This is the Syrian Army fighting with tactical and strategic help from Russian Commanders on the ground.Russia seems to be testing all its advanced weaponry, Air assets and not to mention getting Vital experience when it comes to War fighting capability from Syria....
edit on 1-8-2016 by maddy21 because: (no reason given)