Black Hole with No Parent ? 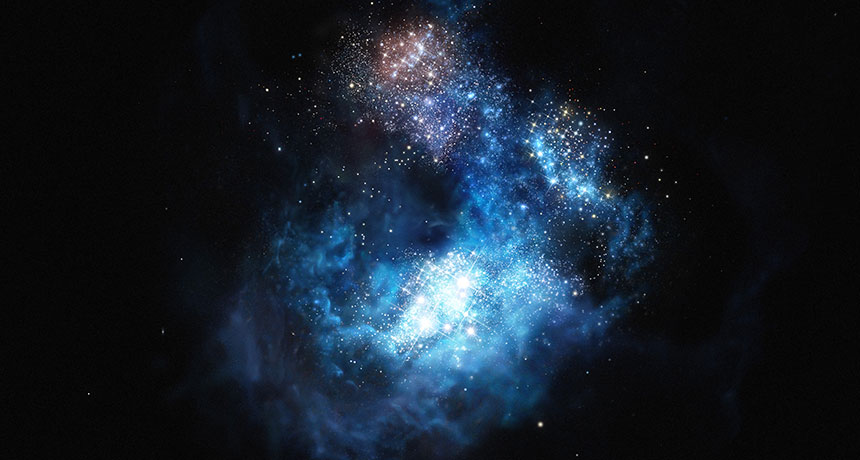 A remote galaxy might harbor a type of black hole that arises directly from a massive cloud of gas rather than forming after the death of a star. This rare specimen could explain how some galaxies built gargantuan black holes in the first billion years or so after the Big Bang. The galaxy, known as CR7, is unusual (SN: 7/25/2015, p. 8). It blasts out more ultraviolet radiation than other galaxies that lived at the same time, roughly 13 billion years ago (about 800 million years after the Big Bang). The gas in CR7 also appears to lack elements such as carbon and oxygen, which are forged within stars and then ejected into space. One idea is that CR7 is giving birth to first-generation stars, similar to the first stars ever created in the universe. Another hypothesis is that CR7 harbors the first known “direct collapse” black hole, one that forms when a blob of interstellar gas collapses under its own weight without first forming stars.

i find this really peculiar. is there an explanation science can say we dont know and hence cant have a theory... all the way from earth.

im really beginning to believe either its all a simulation or what we perceive is not at all whats actually there.

originally posted by: odzeandennz
is there anything we will eventually not have an answer to?

i find this really peculiar. is there an explanation science can say we dont know and hence cant have a theory... all the way from earth.

im really beginning to believe either its all a simulation or what we perceive is not at all whats actually there.

Even the top physicists themselves admit that Physics is in disarray and turmoil.

They are stumped, long held beliefs are falling almost daily, great minds are stymied and confused, not knowing where to go from our present, confusing paradigm.

The resident armchair experts on ATS will however, protest the contrary, as is usual. (Yay..go physics) But, *real* theoretical physicists at the coal face will admit the truth, they don't have much of a clue anymore. They thought they did, but as new discoveries transpire, the muddier the astronomical waters become to them...IMO, Kudo to them, for admitting they are only Human after all and a white lab coat and protective goggles doesn't make them any less so.

A black hole. What is it?

Currently, we envisage a black hole as a point in space, where gravity is SO powerful, the local space time is massively deformed and warped to the extent that they, and almost everything else is inexorably drawn towards the phenomena and once caught, will never escape...being sucked down into the extreme gravitation 'well', faster than the speed of light..yes...faster.

This is why they're called 'black' holes, as even light, supposedly the fastest thing in existence, cannot outrun or escape one.

They can be thought of as super powerful whirlpools at sea...the sea pouring into the whirling and rapidly spinning region, being sucked down into it's attractive clutches, unable to escape once within it's attraction zone.

The sea is space time, and of course, fish and boats, and ships and seaweed and all manner of things will also experience the same thing as the water if it ventured too close.

The black hole is spinning rapidly, when space time and matter and energy is drawn into it, some is flung up and out towards the event horizon, only to meet freshly ensnared space time, matter and energy starting it's journey into the hole..a collision takes place between these objects at a speed greater than the speed of light...and temperatures greater than the center of our Star ensue, in turn vapourizing almost everything unfortunate enough to be caught.

(Which, is somewhat of a paradox when you think about it...matter / energy /space time being flung out to meet matter / energy space time...which is turned to vapour by temperatures hotter than the core of a star...paradox)

Where the problems really kick in, is the concept of a singularity...a point within the 'bowels' of the black hole, where the extreme forces compress and shape everything sucked in into a space so tiny, that it occupies...no space, another paradox. Not only that, but the singularity, the tiny compressed matter/ energy/ space time 'thing'...is infinitly compressed while being infinitely massive...paradox.

Quantum mechanics has a hand in all of this, but while each theory beautifully describes their own 'domains'..relativity the macro scale, and Quantum mechanics the micro scale (smaller...but you know)...they are incompatible with once another.

Physics doesn't know what to think, where to go and how to proceed..they are at a cross roads so to speak.

Here's a theory some may or may not wish to tweak or think on...

Physics has sought an answer to how 'everything' exists or became...how did the big bang happen, what was there before the big bang?

Black hole theory can explain all of this...and possibly more.

In short, Black holes exist is all observed Galaxies...usually having a super massive black hole at their center, and millions of smaller holes existing throughout the individual galaxies...some as we see in this thread in gas clouds not just star systems.

Where does the 'engine' part come in? Well, think of the singularity...physicists presently think there is a singularity at the heart of all black holes..perhaps they are only partly correct.

What if the singularity, the infinitely small, infinitely massive point of super compressed matter/energy/spacetime was not existing in all of the black holes, but only in one of them...which one?

The last one left in the Universe...

Millions, perhaps billions, perhaps even trillions of black holes existing throughout the Universe, with gaping mouths gobbling up..well, everything around them, save for some radiation (Hawking radiation), and compressing the gobbled up goodies, into a singularity..trillions of mouths leading to one, single, infinite 'belly'.

The singularity is a point within the last remaining black hole in the Universe, the black hole that survived all of the other trillions of holes, when all matter / energy / space time had been gobbled up and the holes had nothing left to recycle but themselves...an infinite, yet almost empty sea containing nothing except this last surviving black hole and Hawking radiation..within the last hole resides the infinite, super compressed point occupying no space, yet unimaginably massive...the pressure of the Hawking radiation pressing upon the event horizon, signalling the hole there is nothing left to consume...except itself.

Once the hole has consumed itself...there is now nothing constraining and constricting the singularity...the infinite can now be released from it's powerful confines, it's prison now removed...and it bursts forwards, in a one stupendous, awesome, and wonderful BIG BANG!

Physics may be in disarray...but honestly, it's all rather elegant and beautiful when you have time to think about it.

There you have my theory of...everything.

originally posted by: odzeandennz
is there anything we will eventually not have an answer to?


Actually, the topic of this thread raises a lot of questions rather than answers.

The more we discover, the more questions we have to find answers for.

NASA Goddard: "All Galaxy's may be Embedded within a vast sphere of Black Holes" Holiday Feature. ?? 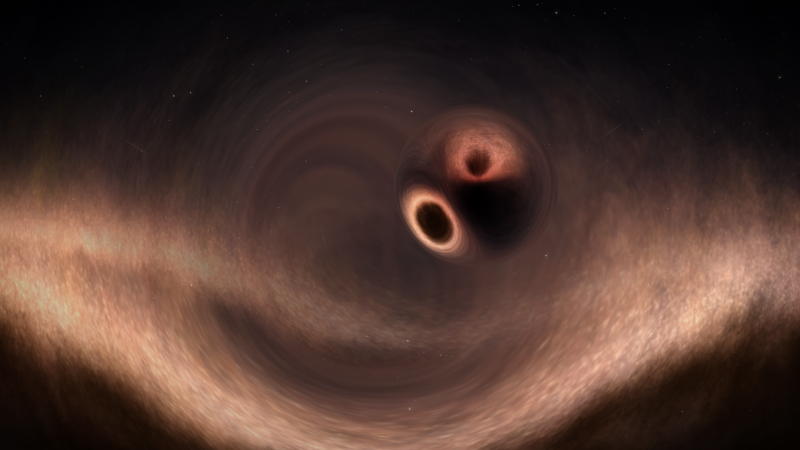 Dark matter is a mysterious substance composing most of the material universe, now widely thought to be some form of massive exotic particle. An intriguing alternative view is that dark matter is made of black holes formed during the first second of our universe's existence, known as primordial black holes. "This study is an effort to bring together a broad set of ideas and observations to test how well they fit, and the fit is surprisingly good," said Alexander Kashlinsky, an astrophysicist at NASA Goddard. "If this is correct, then all galaxies, including our own, are embedded within a vast sphere of black holes each about 30 times the sun's mass." Kashlinsky suggests that this interpretation aligns with our knowledge of cosmic infrared and X-ray background glows and may explain the unexpectedly high masses of merging black holes detected last year. In 2005, Kashlinsky led a team of astronomers using NASA's Spitzer Space Telescope to explore the background glow of infrared light in one part of the sky. The researchers reported excessive patchiness in the glow and concluded it was likely caused by the aggregate light of the first sources to illuminate the universe more than 13 billion years ago. Follow-up studies confirmed that this cosmic infrared background (CIB) showed similar unexpected structure in other parts of the sky. This image from NASA's Spitzer Space Telescope shows an infrared view of a sky area in the constellation Ursa Major. After masking out all known stars, galaxies and artifacts and enhancing what's left, an irregular background glow appears. This is the cosmic infrared background (CIB); lighter colors indicate brighter areas.

The CIB glow is more irregular than can be explained by distant unresolved galaxies, and this excess structure is thought to be light emitted when the universe was less than a billion years old. Scientists say it likely originated from the first luminous objects to form in the universe, which includes both the first stars and black holes.

In 2013, another study compared how the cosmic X-ray background (CXB) detected by NASA's Chandra X-ray Observatory compared to the CIB in the same area of the sky. The first stars emitted mainly optical and ultraviolet light, which today is stretched into the infrared by the expansion of space, so they should not contribute significantly to the CXB. Yet the irregular glow of low-energy X-rays in the CXB matched the patchiness of the CIB quite well. The only object we know of that can be sufficiently luminous across this wide an energy range is a black hole. The research team concluded that primordial black holes must have been abundant among the earliest stars, making up at least about one out of every five of the sources contributing to the CIB.