posted on Jul, 13 2016 @ 09:54 AM
link
The new mobile game 'Pokemon Go' released less that a week ago, has officially taken over the world. Such much so, it would surprise me if at this very moment there weren't a couple of Eskimos running around the North Pole, skipping over icebergs trying to catch Pokemon.

Downloads from the US Apple store alone have topped 15 million. It is estimated that globally, the amount of users has exceed that of the entire North American Twitter user base of 65 million. With the game just today being release in the UK and Europe, the total number of users could reach 100 million by the end of the month if not the end of the week.

This is Central Park yesterday...


In just seven days since the game was released in the US, Australia and New Zealand, Pokémon Go has now almost certainly exceeded Twitter’s 65 million American users, and the game’s servers have repeatedly crashed under the strain of its popularity.
The Guardian


The sudden success of “Pokémon Go” is introducing consumers to augmented reality, a technology that blends the digital and physical worlds where many in Silicon Valley are placing big bets. Augmented reality displays digital images on a view of the real world, such as Pokémon characters on a city sidewalk. “Pokémon Go” shows digital characters on a smartphone screen, overlaid on the phone’s view of its surroundings.

Even before “Pokémon Go,” many consumers tried a type of augmented reality via Snapchat Inc.’s filters, which overlay masks or dog noses onto users’ faces in their smartphone screens as they take snapshots of themselves. Others are testing the technology. Microsoft Corp. is building an augmented-reality headset called HoloLens.


However fun and entertaining, a creeping malaise is growing just as fast with stories of strange, unforeseen and even dangerous occurrences taking place...


The game, which leads players on a real-word scavenger hunt in which they can view Pokemon characters in virtual reality through their phone’s cameras, is causing some users to find trouble...

In Wyoming, the update of the popular 90s gaming franchise caused a teen player to follow the directions on her phone to a river, where she stumbled on a dead body. “I was walking towards the bridge along the shore when I saw something in the water. I had to take a second look and I realized it was a body,” Shayla Wiggins told KTVQ, adding that she cried for about an hour.

In Missouri, a group of armed robbers lured eight players to one of the game’s Pokestops — which is a spot in the real world that shows up on the GPS on the players’ phones that gives them items to catch characters. “Using the geolocation feature of the ‘Pokemon Go’ app, the robbers were able to anticipate the location and level of seclusion of unwitting victims,” Sgt. Bill Stringer of the O’Fallon Police Department said in a statement to Buzzfeed.

A Reddit user noticed there was a trove of Pokéstops in a local cemetery. “All of the graves are Pokestops,” the user TheBatInTheBirdcage wrote on the Pokémon Go subreddit with a photo of the blue floating cubes.


As with cemeteries, museums and memorials are also beginning to report disrespectful players of the game loitering around catching Pokemon in inappropriate places...


The United States Holocaust Memorial Museum and Arlington National Cemetery, both in Washington, DC area, have both issued appeals for players to avoid hunting Pokemon on their sites. "Playing Pokemon Go in a memorial dedicated to the victims of Nazism is extremely inappropriate," said Andy Hollinger, director of communications at the United States Holocaust Memorial Museum in Washington, D.C. in a statement sent to CNNMoney.

"We are attempting to have the Museum removed from the game," the statement said. Arlington, the burial ground for the nation's war dead, tweeted out a somber request: "We do not consider playing 'Pokemon Go' to be appropriate decorum on the grounds of ANC. We ask all visitors to refrain from such activity."

Other hallowed locations where Pokemon have reportedly been spotted include the Auschwitz museum in Poland, the Los Angeles Museum of the Holocaust, the 9/11 Memorial in New York City, the Vietnam Veterans Memorial in Washington and monuments in national parks.

Pawel Sawikci, a spokesman for the Auschwitz Memorial, told CNNMoney that he wasn't familiar with the game, but has seen screenshots posted to Twitter of the use of Pokemon Go in Holocaust memorials.
CNN


This goes without saying that trespassing is also becoming a major concern...


Baker said police responded to a report of a person wandering through a backyard in Gresham recently. By the time the officer arrived, the trespasser was gone, but the surrounding streets were filled with people slowly ambling down the street, necks craned, faces washed in digital blue as they stared at their phones. The same officer said "that on Sunday morning he estimated around 300 people walking around downtown with their phones held up in front of their faces.
OregonLive

Holland residents have complained to police that people are “entering onto their property uninvited in order to achieve levels in the ‘Pokemon Go’ game/app,” according to the Holland Police Department.
Boston

"In residential areas with fewer cultural offerings I was loitering in front of houses, holding up my phone to try to catch a Pokémon that appeared on their lawn. I was worried I looked like a weirdo taking pictures of random houses. Some people in the U.S. are already complaining that the app has led to gamers lurking around their homes at all hours."
- CBC Reporter

Boon Sheridan woke up to find that the hugely popular augmented reality game had decided that his house was one of the game’s important gyms. That means that people are rewarded for coming to it in real life – resulting in what he said was dozens of people outside his door.

The game’s gyms are mostly picked using points of information on a map, meaning that areas like parks or churches will usually get the designation. But the app appears to have used an old version of the map, which showed that Mr Sheridan’s house was a church despite not having been for over 40 years.That has meant that a steady stream of people has been showing up to his house since the game became one of the most popular ever released this week. And there appears to be very little he can do about it.
Indepedent
edit on 13-7-2016 by rexsblues because: (no reason given)

posted on Jul, 13 2016 @ 09:54 AM
link
Other unofficail reports of car crashes, and other accidents from wondering aimlessly in pursute of the Pokemon are pooring in. Plus one officail scam story of a youtuber who claimed to have witnessed a murder while playing the game in order to garner views for his channel.

So what in the hell is going on? Is the world really going change overnight because of an Augmented Reality mobile phone game? This is insane, the world has gone mad.
edit on 13-7-2016 by rexsblues because: (no reason given)

It´s only a hype, and those that are hyped easily, are hyped now.
Next week there comes another hype train, can´t you hear him....ChooChoooo...

posted on Jul, 13 2016 @ 10:16 AM
link
considering the history of arlington national cemetery it`s ironic that they are concerned with a lack of respect.
The sole reason for putting the cemetery in it`s present location was to desecrate Robert E. lee`s family estate and make it uninhabitable to him and his descendants when the war was over.

The Exmore Police Department needs your help. The town in currently infested with Pokemon. If you are capable please come and help us catch them all. It's only with your help that we will be able to stop this infestation.

The Exmore Police Department does everything we can to relate to the public and make ourselves available and approachable,” said Sgt. Jason Campbell.

originally posted by: Tardacus
considering the history of arlington national cemetery it`s ironic that they are concerned with a lack of respect.
The sole reason for putting the cemetery in it`s present location was to desecrate Robert E. lee`s family estate and make it uninhabitable to him and his descendants when the war was over.

Damn, I never knew that.

What's even more funny than people wandering around at all hours to catch pokémon is the people that think it's going to cause some poképocalypse.

A friend of mine on FB posted this: 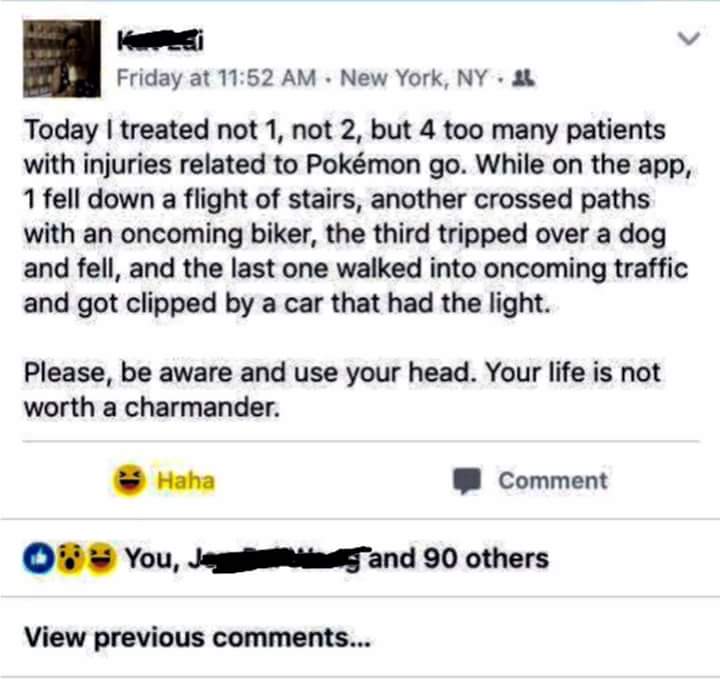 And that was just one doctor! Imagine how many more accidents occurred nationwide

I sense a whole lotta Darwin awards are in order.

Maybe this is how they're truly planning population reduction?
edit on 13-7-2016 by Liquesence because: (no reason given)

For the record, most of these Pokémon Go memes are completely fabricated.

So yeah, don't, as always, believe everything you read.

posted on Jul, 13 2016 @ 11:10 AM
link
I asked this on another thread, but haven't got an answer. Who picks the locations where the Pokemons are found?

posted on Jul, 13 2016 @ 11:10 AM
link
There was a person live-streaming Pokemon GO on YouTube, driving around at 2am looking for pokemon, and came across someone dumping a body behind a church.

posted on Jul, 13 2016 @ 11:21 AM
link
As much as i hope this is just a hype that will die soon i fear this is not the case. People are just really stupid and gullible these days. Right now i am working (break now) and 1 of the workers in the store keeps running around checking his phone and capturing pokemons! In a store filled with people while he is working!!! Retarded !!! This is in the Netherlands. I have already seen multiple reports in the news about people walking near traintracks, going in police stations & hospitals looking for pokemon. This truly is the ZOMBIEAPOCOLYPSE!!!!!

originally posted by: mikell
It won't be long before the deaths start to stack up. walking into traffic, more robberies you name it.

Good. The weakest of the herd need to be shed like old skin so the rest of us can continue without their added baggage weighing us down.

Go Pokemon. Do your thing!!

posted on Jul, 13 2016 @ 12:05 PM
link
When I read the story about the Teen finding a dead body in the water while playing Pokemon
I instantly thought that the dead person was probably another player chasing the same Pokemon, who drowned during the game.

But hey, since we are on ATS; it could be that the person was murdered and the killer placed a Pokemon there, so that the body can be found without a trace to the killer.

posted on Jul, 13 2016 @ 12:21 PM
link
This game is crazy!!! I work at a hospital and we have people walking up and down the halls looking for Pokémon. It seems that somehow one of our time clocks is a spot to find "hard to find" creatures.

Security reported people walking the lots late into the night last night. And some visitors got upset when they weren't allowed into the hospital to "chase Pokémon" .

This is a place of business!!! There are even adults that are wondering around aimlessly staring at their phones. Nothing exciting, except they did have one girl trip over the helipad chains because she was looking at her phone and not where she was walking.