posted on Jun, 3 2016 @ 09:26 AM
link
Emails were not the only place where Hilley has security problems, it seems she was above the use of encrypted telephones also. Why would Obama have ever chose her as SoS? Did HRC use leverage to gain the SoS position, it obviously was not given to her on merit. So Hilley compromised national security in her time as SoS and now she wants to be the president of our country?

It is my opinion that Hilley should be headed to prison when the investigation of her email is completed.

I embellished the tittle some what, as I wanted it to reflect her use of unencrypted telephone calls.

The targets were said to be “one step ahead of us” on a constant basis. Johnson said that his team considered other sources for a security breach, but settled on Clinton’s unencrypted phone calls to senior staff as the only option. There’s no concrete evidence, so of course the Clinton camp is calling the allegations “patently false.”

The circumstantial evidence is pretty strong, however. When the special operations command became tired of botched missions, it stopped giving advance warning to the State Department officials in Manila. Once they did that, they finally had missions start to go to plan.

I suppose Newsweek will be labeled as part of the vast right wing conspiracy by the Hillary camp now?

posted on Jun, 3 2016 @ 09:43 AM
link
Maybe her position was a reward for letting him get the presidential nomination.

Wonder if some were intentional?

Somewhat off topic, but I cannot figure out why her server was not confiscated. If there was sufficient cause to warrant a criminal investigation should not the first step be to secure the evidence?

As I understand it, the FBI simply accepted a flash-drive with the mails that she deemed relevant. Did they lack the probable cause to do a search and seizure, or did someone somewhere just decide to be 'friendly'? Because privately having an unsecured server with confidential emails should in and of itself be a criminal activity. Or have I been fooled by anti-hillary postings?

The FBI has had the servers hdd for some time now and they also got emails that were backed up to the cloud by the tech company she later hired to take charge of her email service. Of course the NSA would have any missing emails that were deleted, she hung herself this time.

My self I honestly think there was a multitude of crimes found in the HRC emails and that is why the FBI is taking so long to end their investigation.

Clinton's IT contractors turned over her personal email server to the FBI on August 12, 2015

posted on Jun, 3 2016 @ 10:03 AM
link
This issue is going to be very problematic for here whether she is indicted or not. Terrorism and national security are always high polling issues with the electorate. I would rather have Trumps lack of record than have to defend against allegations from others that served about security compromises.

originally posted by: Bluntone22
Maybe her position was a reward for letting him get the presidential nomination.


Many suspect that there was a quid pro quo deal done that handed Obama the nomination with Hillary's agreement to fold and her getting the appointment to SOS in return. 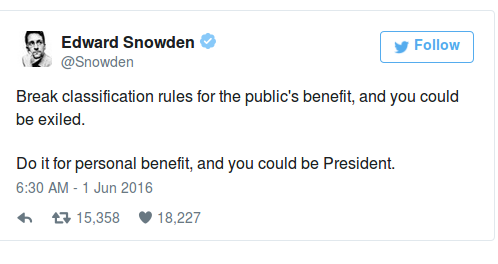 Oh man
That will register with the millennials; alot of them look up to Snowden as a whistleblower.

posted on Jun, 3 2016 @ 10:26 AM
link
"Encryption and passwords are for nerds, not fancy State Department ladies" - Hillary Clinton

As I mentioned in the thread im which you introduced this item, a certain country keeps surfacing in relation to the Clintons:

Is there something more than coincidence in the Clinton-Chinese connection?

Not only do they have Hillary's server, but:

The FBI has seized four State Department computer servers as part of its probe into how classified information was compromised on former Secretary of State Hillary Clinton’s private email system, according to people familiar with the investigation.

The four servers, which were located at the State Department’s headquarters building, were seized by the FBI several weeks ago.

And the FBI has Pagliano's personal server as well.

Can't find the article on it just now, but it's around.

posted on Jun, 3 2016 @ 11:23 AM
link
The Newsweek source quoted in the OP source has more information regarding how they came to suspect Hillary's unsecured phone use as the source of leaks.

They began to investigate. The U.S. team advising the Filipino forces swapped out one local counterterrorism unit it was working with for another in an effort to locate the source of the leaks, Johnson says. But Dr. Abu still managed to elude them. The reason, he believes: unsecure chatter between Washington and the U.S. Embassy in Manila.

“Anyone can just sit outside the embassy and listen,” with off-the-shelf eavesdropping devices, he says. “We suspected the leaks [came from] somewhere at State at the time.”

As a dramatic solution, the Special Operations Command stopped giving advance warning to senior State Department officials about raids, Johnson says. Whatever the cause, the leaks stopped.


Johnson, who voted for Barack Obama in 2008 and now supports Senator Bernie Sanders, says he had previously witnessed the lax communications habits of Clinton and her aides. In January 2010, Clinton was in Honolulu to give a speech on the administration’s “pivot” to Asia when news of the Haiti earthquake broke. She retreated to the secure communications facility in the basement of Pacific Command headquarters to make calls to various military officials and humanitarian groups to help organize a response to the catastrophe. But she also “needed to talk to her senior staff on Mahogany Row,” her seventh-floor executive suite back in Washington, Johnson recalls.

The only problem: She did not readily have any secure telephone numbers or email addresses for her staff members because they were all using personal servers and phones. Security had prevented her traveling aides from bringing their personal cellphones into PACOM headquarters. They appealed to Johnson for an exception, but he refused, citing alarms and lockdowns that would be automatically triggered by any attempt to bring unauthorized signal-emitting units into the building.

Clinton came up with a work-around, Johnson says. “She had her aides go out, retrieve their phones and call the seventh floor from outside”—on open, unsecure lines, he says.

“My relationship with that group started downhill when I refused to let them bring phones and computers into my office [at the Special Operations Command],” Johnson recalls. “It was really an eye-opener to watch them stand outside using nonsecure comms [communications] and then bring messages to the secretary so she could then conduct a secure [call] with the military” and the State Department.

Exclusive: Hillary Clinton and Her Staff May Have Compromised Counterterrorism Ops With ‘Sloppy’ Communications

I actually live near the location... about five miles away.
I will dig up the article that was put out about it.

Why would Obama have ever chose her as SoS?

Clinton hardly got that job because she was 'qualified'.

The only reason she got it was payback for dropping out of the primaries so their party could have the 'first black president'.

Here is the article that covers the location that is near me.
Daily Mail
Here is a previous article about the lax standards at the company (Datto) itself.
Daily Mail
It is odd how long this info has been out there. These articles are from October. Shows how little coverage they received on the US MSM.

In its promotional literature Datto claims that its data storage sites are 'data fortresses' that are monitored 24 hours a day. It claims that nobody can access the data without a retinal or palm scan. But the reality at a sprawling, low-rise building on the edge of a four-lane highway in Bern Township, beside Reading, Pennsylvania, seems to be rather different. Daily Mail Online's reporters confirmed through public records, Datto's own published material and inquiries that the building is one of its network of data storage sites. The company shares the building with a number of other companies including Boscov's department store and transportation firm Penske. Datto's servers are thought to be in the basement. The site sits on a major intersection and is close to a gas station and a farm which has a high tower overlooking Datto's roof. Read more: www.dailymail.co.uk... y-Clinton-s-emails.html#ixzz4AXPyEcRM Follow us: @MailOnline on Twitter | DailyMail on Facebook