Has Anyone Ever Sent Fan Mail to a Famous Person...and received a reply?

posted on Jun, 3 2016 @ 08:03 AM
link
I wrote a fan letter to Harrison Ford soon after Empire Strikes Back was released. I got 2 autographed photos in the mail a couple of weeks later.
I have been married for about a million years but Harrison is my "free pass" if you know what I mean. Just in case he ever happens to pass through the podunk town where I live.

posted on Jun, 3 2016 @ 08:18 AM
link
a reply to: peppycat
Facebook is where I have "talked" to various celebs that I enjoy their work. I have had quite a conversation with a couple via facebook messenger! Usually not that big of a star but in tv series that I enjoy, or we have being Canadian in common.

Gave me my first job in the movies and I wrote a thank you note.

Sent back another job offer....


Facebook is where I have "talked" to various celebs that I enjoy their work. I have had quite a conversation with a couple via facebook messenger! Usually not that big of a star but in tv series that I enjoy, or we have being Canadian in common.

posted on Jun, 3 2016 @ 11:52 AM
link
I get hopelessly starstruck; I'm not proud of it, but in consideration I have nothing worthwhile to say to the men and women who create the movies/music/literature that I love and I'd imagine that meeting any of them would lead to nonsense blubbering.

But I do have a copy of a novel from a favorite author that a friend gave me, with a personalized message to me and it's about my most prized possession. So it's worth knowing other people who are willing to chat with celebrities.

posted on Jun, 3 2016 @ 12:12 PM
link
These are all great stories everyone! I super appreciate everyone sharing their experiences on this thread... thank you for posting... to anyone I haven't replied to. I really don't feel that silly anymore about sending fan mail in hopes of getting an autographed reply now... famous people can be down to earth and really care about their fans it seems.

posted on Jun, 3 2016 @ 01:27 PM
link
Yes. When I was about six years old I wrote to Dr Seuss telling something along the lines of I love your books. He sent me back a letter and a photo of himself and a cat and he was wearing a cat in the hat style hat. I so wish I still had his reply.

posted on Jun, 3 2016 @ 05:58 PM
link
While spending time on another forum Robert Plant visited and posted with all of us for a short time. It may have been during his last marriage split up and maybe he was either lonely or looking to test the fan waters. Anyway, it was just like posting with anyone else.

posted on Jun, 3 2016 @ 10:37 PM
link
When I was a teenager heavily into local music, had written a letter and an made some fan artwork for a band when they became nationally famous. Though, never heard anything back from them but it was acknowledged that fans sent in the art. Other than that not big into sending anything celebs or the like, other than recent AMA participation with asking questions.
edit on 3-6-2016 by dreamingawake because: (no reason given) 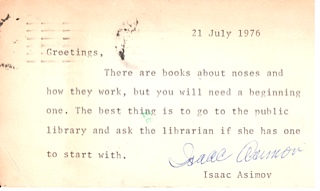 posted on Jun, 3 2016 @ 11:44 PM
link
I wrote a couple of letters to the actor David Rappaport and I received a couple of signed
photos in return.

I also wrote to the Osmond brothers as a teen and I heard back from one of their relatives.
Their relative was compiling an album of fan letters for them and mine was one of the
letters chosen.
edit on 3-6-2016 by mamabeth because: (no reason given)

posted on Jun, 4 2016 @ 12:27 AM
link
In 1989, at age 11, I sent a letter to my favorite baseball player, Will Clark. He was at the height of his fame and I didn't really expect a reply. I was quite surprised a couple months later when I recieved a personal letter from Will the Thrill, along with an autographed photo. I was on cloud 9 and felt I had a personal relationship with Will. To this day, still my all time favorite player.

Slightly off topic but back in the late 90's one evening, my long time buddy and I were hanging out at the boat launch of our local resorvoir. We were fishing, drinking a few beers and unwinding after a long week of pounding nails. A beat up Ford truck backed a small aluminum boat into the water. The passenger who hopped out (colt 45 beer in hand) immediately drew my attention. The man didn't look like the typical fishermen we were used to seeing. He approached us in a friendly manor, asking if we'd had any luck. My friend, an expert fisherman, got into a long conversation with him about fishing.

The whole time, I'm staring at this man dumbstruck. He was extremely athletic and looked chiseled from stone. I swear he damn near had a glow or aura around him. I knew he was somebody special but i couldnt put my finger on it.

The man mentioned how lucky we were to live in such a beautiful area and asked us about our lives as though he were genuinely interested and entertained. After his partner got their humble boat in the water, he thanked my friend for the fishing tips, shook our hands and said," I'm Ricky, nice chatting with you guys." As we bid them farewell, something clicked and I asked, "are you Ricky Henderson, MLB ledgend? He grinned and said " no, I'm Ricky Henderson, a guy who likes to fish." I started stuttering some nonsense about how amazing it was to meet such a famous ballplayer. He just kinda chuckled and told us if he had a successful fishing trip, we'd probably see him there again someday. He raised his beer and said "here's to the good life, now it's time to catch some catfish! See ya around fellas!"

I couldn't get over what a real, down to earth, regular guy he was. Extremely friendly and humble, which was surprising, considering his cocky playing style. Class act all the way and one of the greatest MLB players ever.

posted on Jun, 4 2016 @ 02:15 PM
link
a reply to: Gothmog
It did change but it's that whole dark half persona I think. Bachman vs king. I didn't like Suzannas song but I loved wolves of the call a.

In the beginning of the last book when he's addressing us his loyal readers he makes reference to a promise guys will make to get their girls to go down on them.
Do you know what that promise is?

Well I felt like he broke it with the ending.

It sure seems that way. It's like he lives in them and can't get out in under a thousand pages and then he just cops out. I felt that with a few of his books.
I tend to like the shorter ones. Gerald game, The Girl who loved Tom Gordon.

Nice thread, I sent a letter to a kinda famous actor telling him he was fired!
Yes he replied! Not kidding!
edit on 6 4 2016 by Quantum12 because: (no reason given)

in no particular order :

all gave replies beyond any expectation

posted on Jul, 1 2016 @ 11:09 AM
link
a reply to: Abysha okay, I appreciate your kindness and wanted to share with you that I actually sent a note to him on Friday the 13 2013...and in'm not ever going to send him a letter again as his fan because he didn't respond to me in the first place.
Now in'm starting a club against him
Looking for folks to join.
Cuz that was to mean.
My hand wasn't so shaky and my writing looked clean and good, for once... it was very difficult for me.

originally posted by: peppycat
a reply to: Abysha okay, I appreciate your kindness and wanted to share with you that I actually sent a note to him on Friday the 13 2013...and in'm not ever going to send him a letter again as his fan because he didn't respond to me in the first place.
Now in'm starting a club against him
Looking for folks to join.
Cuz that was to mean.
My hand wasn't so shaky and my writing looked clean and good, for once... it was very difficult for me.

Oh my word, that made me sad just reading it.

Maybe he would think a club like that is hilarious and finally respond to it.