posted on Apr, 13 2016 @ 09:15 AM
link
Decided to put a few pictures to ATS members for thoughts and comments regarding possible orbs/ghost images captured.

Firstly the location. I recently took my family to visit the Chislehurst Caves, which are located close to London in an area called Bromley, Kent. The caves have a very long and varied history reportedly starting from the time of Druids, when they were used for ceremonious reasons (including alleged sacrifices) through to World War Two, where they were used to house up to 8,000 families displaced from London by German bombing campaigns.

The caves were last used in the late 1960's for music concerts by such megastars as Led Zeppelin and Jimi Hendrix - the latter being so spooked by the caves he would immediately go back above ground after finishing his set due to bad vibes. Here is a map of the caves which as you can see are quite extensive and just to make them more interesting now unlit for guided tours...

And here are the three pictures I managed to take while being guided around in complete darkness with only oil lamps to light our way. I will let you make up your own minds as to whether I have captured what I believe are a forming orb in shot 1, a face inside an orb in shot 2, and odd colored vapour (I have photographed this many times at other locations and believe it is not a flash effect as following shots taken immediately after have no colouring).

Anyway enjoy and do visit/check out the caves if you ever get the chance!

The third photo of yours is interesting if...
that is a 'figure'?

Or is it an opening in the side of the wall?

I'm not really sure either. Could possibly be an opening...

there was no 'actual' opening in the side of the wall...?

It wouldn't surprise me if someone, someday finds proof that certain places 'hold' energy...of the past.

posted on Apr, 13 2016 @ 09:34 AM
link
i get a creepy feel just looking at those pics and imagining all the history of the place-- Centuries worth.

The bit about Led Zeppelin was interesting. I attended a freaky concert of theirs in Oakland Ca. in the 70s that was rife with spirits witnessed by me and others.

Really interesting. Maybe the group's music attracted a few extra groupies for beyond!

I don't know why they were there, just that they were. if their lyrics have any meaning…

Sit with elders of the gentile race, worlds that seldom seen,

Talk of times for which they wait, all will be revealed .

Its the fact that a spirit, who has access to any place on this planet, actually gets turned on by hanging around in a dingy cavern and going 'boo' now and again to tourists.

Now that is freaky.

They look like mine tunnels to me...fairly uniform height and width...perhaps they were originally from mining...?

I'm sure I could find the answer by "googling" it...but where's the fun in that...

posted on Apr, 13 2016 @ 05:48 PM
link
I've been there as well a few years ago but sadly I didn't see any orbs or strangely coloured clouds of vapor.The orbs are nothing more than dust or other particles suspended or floating in mid air and reflecting the camera flash.The purple haze (can you see what I did there?) is possibly reciprocity failure that gives strange colours in the dark on long exposures that is worse with cheap image sensors.Jimi Hendrix getting spooked out there can be explained by half the time he didn't even know what planet he was on.

What you're seeing are no more than camera artefacts caused by a cheap image sensor and low quality lens.Look what happens when you use good quality optics and a powerful flash....... 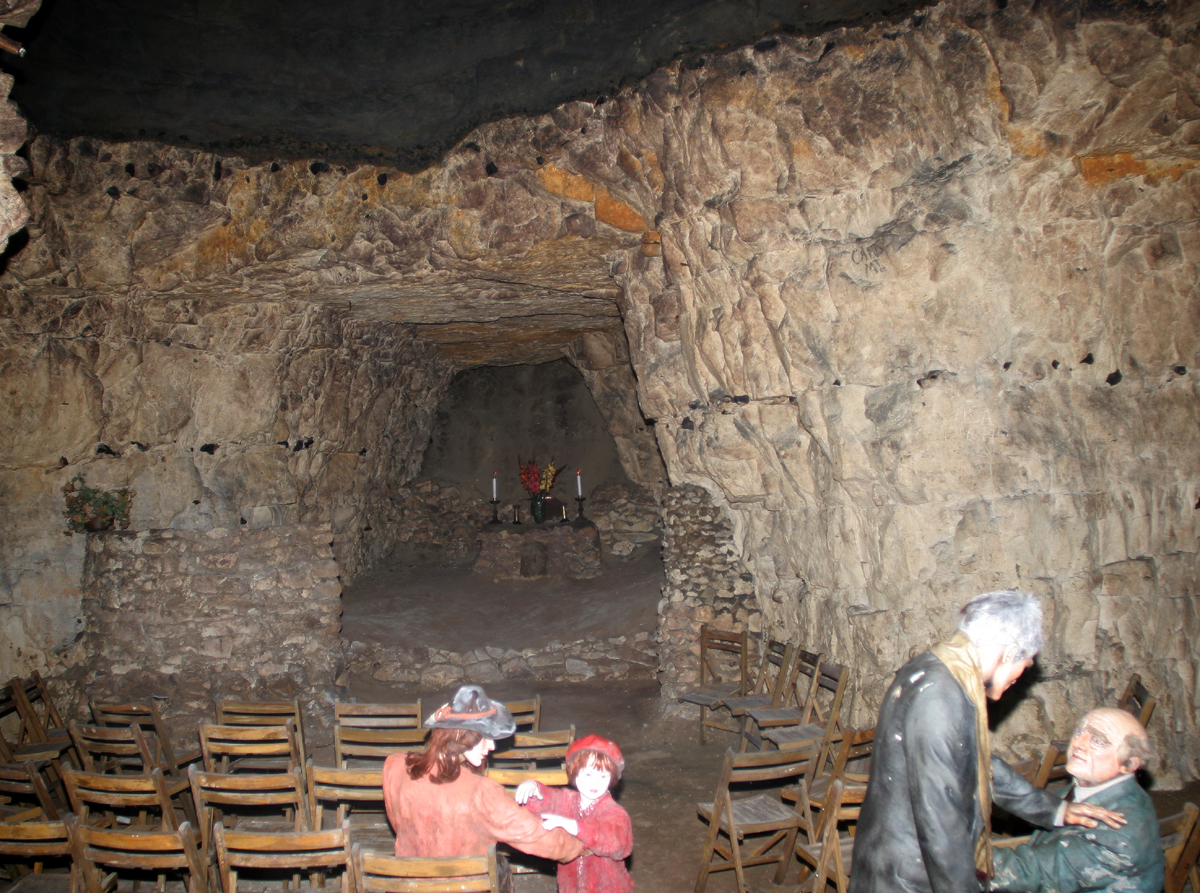 Is there a link where I can read up more on the history of the place?

i get a creepy feel just looking at those pics and imagining all the history of the place-- Centuries worth.

The bit about Led Zeppelin was interesting. I attended a freaky concert of theirs in Oakland Ca. in the 70s that was rife with spirits witnessed by me and others.


Jimmy Page was obsessed with Aleister Crowley, and even owned a Crowley property in Scotland which is supposed to be haunted by a demonic entity. Stairway to Heaven contains loads of references to Crowley's teachings. Interesting that Led Zepplin went to these caves considering their other beliefs and interests.

Interesting that Led Zepplin went to these caves considering their other beliefs and interests.


That struck me, too.

I guess nowadays lots of people 'ghost hunt', what better way to attract them than play killer music?

Jimi Hendrix getting spooked out there can be explained by half the time he didn't even know what planet he was on.


Ignoring the ridicule of arguably, the worlds best guitar player of his day for a moment… from experience I can tell you that getting 'spooked' is a lot different than just being frightened of heights or the dark, for instance.

posted on Apr, 15 2016 @ 01:00 PM
link
Hendrix could have been spooked by something a lot more mundane,such as being claustrophobic.But in typical 1960s hippie fashion blamed it on 'bad vibes'.
edit on 15-4-2016 by Imagewerx because: (no reason given)