posted on Feb, 25 2016 @ 05:26 AM
link
ATS user seascape1988 joined ATS two days after making this video and posted in the new members area asking that it be shared. I replied to him suggesting that he make four more posts for the five minimum needed to start a new thread so he can post it himself, but it's been a while with no reply so I figured I'd share it as he requested. Here's the link to his post asking for it to be shared:

This was taken Friday February 19th at 5:42pm MST in the Sonoran Desert highway while on my drive back to San Diego from Phoenix. These orbs were very large and were perfectly still. My I phone camera cut out at 1 minutes length and I tried to take five more videos, but it would not record....right at that moment they disappeared in thin air with no trace. I still don't know why I couldn't record it. My phone stopped functioning for a few minutes.

This location had no homes for twenty miles and the sky had 0 airplanes or helicopters as far as the eye could see.

There are no military bases in that area that I know of.

I'm not so sure there are no military bases in the area because he doesn't give exact coordinates, but he says "Sonora Desert Highway" which I'm guessing means highway 8, which runs right by the Barry Goldwater range in the Sonoran desert: 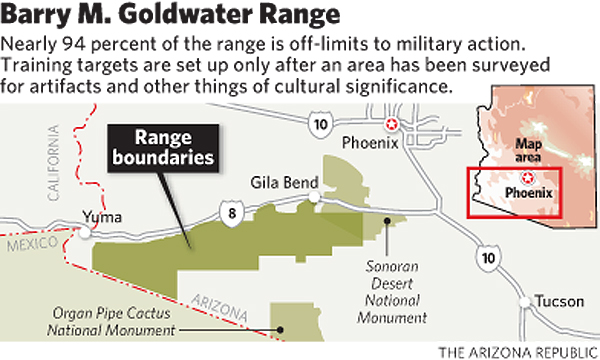 In the video he says he doesn't think it's flares because he doesn't see any aircraft, but there's a mountain range and the planes that dropped the flares could be on the other side of the mountain range and he wouldn't see them so that's not a good reason to dismiss flares. In fact it reminds me a little of the famous Phoenix lights video of the 10pm event that was eventually determined to be flares.

Unfortunately he leaves out information that would help determine the likelihood of the flare explanation, such as how long were they visible, did they "wink out" after 5 minutes, or what?

I wanted seascape1988 to post his own video so he could answer questions about it, but since it looks like he's not going to do that, I figure it's interesting enough to share so I'm honoring his request to share it. What do you think it is?

edit on 2016225 by Arbitrageur because: clarification

posted on Feb, 25 2016 @ 05:30 AM
link
Funny that the lights are directly between two telephone lines and do not move. Other than that observation, I have no idea.

First thing I thought of when I saw them, was the lanterns that I mistook for "something weird" back in March of '08. I made what can only be reasonably described as a truly embarrassing thread about it!

posted on Feb, 25 2016 @ 06:03 AM
link
I don't think they're flares but don't think they are alien craft either. If there was some flight/movement then I may believe so.

I've seen something like this, driving I-10 between Tucson and Phoenix. My son was with me and we watched them for a good 50 miles. There were three discernible lights at first, then just two, then just one. They appeared as one at first, more like a streamer than an orb, but then an orb would separate, dance around a little by itself, and then just disappear. Not fade out -- just disappear. Right at the outskirts of the Phoenix area, the one still remaining was to the east of the highway, so we pulled off the highway and went east (on Queen Creek Road, for anyone familiar with the area) trying to track it down, and then the last one just disappeared. The weird thing is that it seemed to be directly over a dairy farm.

My husband has also seen some strange things driving through the desert on both I-10 and I-8. I'll show him the video tonight and ask him if he's ever seen anything like that.

posted on Feb, 25 2016 @ 06:35 AM
link
Looks like the Phoenix lights, the ones that were filmed later in the night were illumination flares.

Deployed by aircraft in a string, drifting on parachutes, near dusk or nighttime, they aid identifying and targeting the enemy for lo light weapons sights.


First thing I thought of when I saw them, was the lanterns that I mistook for "something weird" back in March of '08. I made what can only be reasonably described as a truly embarrassing thread about it!

How did you come to find out they were lanterns?
The ones shown here are so bright from far away, in daylight no less, you would have to have a bonfire within each one to be a lantern, no?

seen some thing like this in the past. ATS.
They said its flares from hellocopters.


I must say they look like flares to me, see the smoke trail.

originally posted by: TrueBrit
a reply to: Arbitrageur

First thing I thought of when I saw them, was the lanterns that I mistook for "something weird" back in March of '08. I made what can only be reasonably described as a truly embarrassing thread about it!

I agree - with the possibility that they're reflecting additional light from the sun (or just appear brighter because of the contrasts in the sky.) I would have attempted a video had I seen these in the sky as well.

As for making a thread about what turned out to be lanterns, I was mere moments away from doing so myself a couple years ago. Running as fast as I could with a non-jogging stroller, making a shaky cam video even lower-quality than Cloverdale, excited as hell about the UFOs I finally saw at a reasonable distance, and then, thankfully, I figured it out, in time to slow-stroll back home, hyperventiliating and disappointed.

ETA: Ok, just saw Free_Spirit's post. I'd seen flares before, but the videos provided look more like what's here than I've seen of flare pictures in the past. Looks like a solid conclusion. Still would have 2'd myself, but now if I come across such a sight, I won't - so thank you for that ATS
edit on 2/25/2016 by dogstar23 because: (no reason given)

I had a look around for events like wedding parties, graduations, and other notable parties and other such engagements, in the general direction from which the objects appeared to be issuing. I found several on the net, and two of the ones closest to the apparent origin point of these things were actually advertised on someone's Facepage. FolkBook. Whatever. They specifically mentioned things on the agenda for the evening, one of which, in both cases, was the release of lanterns as some sort of memorial or other.

Turns out that they were released about twenty kilometres west of here.

posted on Feb, 25 2016 @ 11:42 AM
link
These look like military flares over the Goldwater Range... if the vid were longer and they didn't drift down or displayed some anomalous characteristics, that would be different... but it looks like garden variety flares to me.

Don't get me wrong, there is some strange, strange stuff going on in the Sonoran Desert... heck, I live there, and I've seen some stuff... and the Phoenix Lights being passed off as the flares they dropped later angers me a tad, but this sorta looks like a conventional military exercise to me.

Or did I miss something (as missing something is always the first possibility on both sides of ufo arguments)? 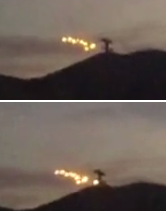 Looks like the Phoenix lights, the ones that were filmed later in the night were illumination flares.


That would be my guess too.

originally posted by: Zarniwoop
a reply to: Arbitrageur

Yes they moved, and not just downward. If you compare your two images you'll see an extra light in the second image that came from behind the telephone pole, so if they were flares they were not only floating down on their parachutes, but there was apparently also a breeze blowing them in the direction of the Photographer's left, which I think is from west to east.

So they move pretty much like flares would move, good support for the possibility they are flares, and they apparently winked out like a flare would do too.

a reply to: free_spirit
Thanks for posting those. It's nice to see a view of the event from a different angle but he sure could have used a tripod, couldn't he? But yes I agree flares seem like a good possibility.

Awww, that's lousy, but you've got some good detective skills. Keep your eyes open pal, if you haven't seen something strange yet, you will, eventually. Thanks.

I choose to look at the situation somewhat differently. The truth is never lousy. Not knowing what the truth is, however, sucks goats through a straw.

posted on Feb, 29 2016 @ 12:07 AM
link
I lived out in Yuma this past summer. Saw a lot of strange lights to the east. The Maine Corps Air Base is there so it could be military for sure.

There's military bases and training going on all the time.

Looks like flares to me. Seen similar. Some flares have parashoots to keep them airborne longer. Wouldn't surprise me if some had drones attached.

originally posted by: PorteurDeMort
I lived out in Yuma this past summer. Saw a lot of strange lights to the east. The Maine Corps Air Base is there so it could be military for sure.

You spent a summer in Yuma?