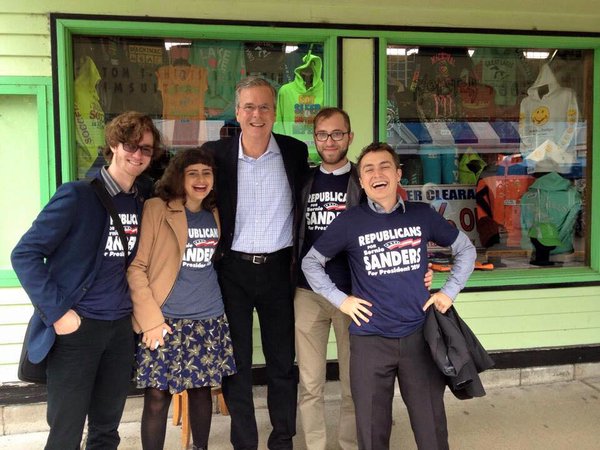 Here is a interesting pic of Jeb Bush with some of his volunteers wearing republicans for Sanders T-shirts. Quite interesting, but I did not find anything to explain the picture, I thought I would share and see if anyone has a link to explain when and why it was taken.

EDIT: interupt42 & daaskapital posted this Link that gives an explanation as to when and why the picture was take, no endorsement from Jeb.
edit on 21-2-2016 by AlaskanDad because: (no reason given)

Thats a bad sign when a bush endorses you.....

Maybe he is hopeing sanders will set up the government apparatus that the next generation of Bushes can use and abuse
edit on 21-2-2016 by crazyewok because: (no reason given)

The way that dude is laughing on the end, I am sure they are being ironic.

Interesting if they aren't.

I wish he would endorse Sanders.

At least he'd be honest then about what the government has planned for us.

Supposedly it wasnt fake or a photobomb.

CORRECTION NOTICE: The person who took the photograph was Seth Zundel, and he says he and his cohorts from Republicans for Bernie did not pull a prank on Jeb Bush at all. The former Florida governor really did pose with them in good fun and has been a great sport about the whole thing. For more details, visit Zundel’s AMA (Ask Me Anything) on Reddit Read more at: tr.im...

posted on Feb, 21 2016 @ 10:28 AM
link
Searching google for the image shows it's from September 2015. Jeb apparently agreed to take the photo with those wearing the Republicans for Sanders shirts because he thought it was funny.

This picture is not evidence of an endorsement.

Jeb and family are probably dining with the Clintons today, making plans.

Thank you so much for the link! I t was an interesting read!

Sometimes I should not do anything before having coffee; reading you did an image search and I face palmed, Duh!

posted on Feb, 21 2016 @ 10:48 AM
link
Notice how they're all wearing jackets and the guy on the end is holding his. They probably had their shirts covered and then uncovered them as they went to take the picture. Jeb probably had no idea and these people were pulling some kind of prank.

Are you sure those are his supporters and not some Bernie supporters taking a pic with him?

I added a link to the op that gives a good explanation.

posted on Feb, 21 2016 @ 11:33 AM
link
I definitely would never support Jeb, but I like him. I "get" his sense of humor and appreciate it. I think it's sad he didn't do better in the race. I wouldn't have wanted him to win, but he was slaughtered by extremists (and Donald) .

I must admit you're right; Jeb is showing he has an excellent sense of humor.

I would much rather seen Cruz slaughtered, he is such a cretin!

I wonder where Jeb's supporters will go now that he ended his campaign? He won nearly 8% yesterday. I don't see them going to Trump -- he's been hammering their guy for months and has poised himself as Jeb's nemesis.

Sanders? No. But it could be this is just the thing to bring Rubio or Cruz neck and neck with Trump.

If it makes you feel any better, I still think Trump intends to break from the party and split the conservative vote to throw the race to democrats. In doing that, I can only assume it's intended for democrats (Bernie, IMO) to win by a large enough margin to give him a mandate that allows our corrupt Congress to begin spending as much money as they can and as soon as possible.

So it would make sense that Trump would take about half the conservative votes with him if he does break from republicans, and Cruz (or Rubio) to take the other half.

Ha...I doubt that makes you feel better but that's my prediction. Maybe I am just in denial that Trump or Cruz could ever be POTUS. I can't stand either of them.
edit on 21-2-2016 by MotherMayEye because: (no reason given) 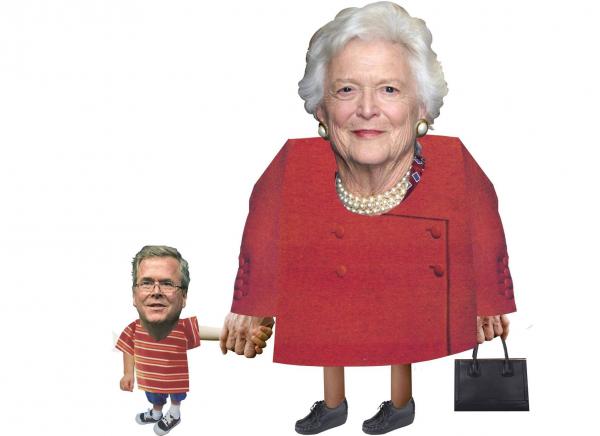 I am glad Jeb quit the campaign, and this proves what a faker he really is, and his true colors don't represent anything his constituents believe, or that he is supposed to embrace. Jeb Bush did a job on Florida when he was governor, and not any of them good.
Assuming any of this is actually real, but either way, Jeb Bush is a total retard.