posted on Feb, 10 2016 @ 10:57 AM
link
It's not exactly breaking news but I just found out. Babies that are born through a c-section have more chance to have diabetes, asthma, obesity and some other autoimmune problems in their life like allergies. The explanation is that when born the natural way, the baby ingest some bacteria, which dwell then in the intestines of the baby. This is the explanation that seem obvious to researchers but they admit that the research is ongoing and that there may be other factors.


Several studies have previously shown that children born by Caesarian delivery face a greater risk of developing asthma, allergies, and type I diabetes, but this is the first time a single study establishes a correlation between C-section and a number of chronic immune disorders.

She acknowledges that the evidence linking cesarean to worse child health is not unequivocal. "It is clear that cesarean-born children have worse health, but further research is needed to establish whether it is the cesarean that causes disease, or whether other factors are at play," Dr. Blustein says. "Getting definitive answers will take many years of further research. In the interim, we must make decisions based on the evidence that we have. To me, that evidence says that it is reasonable to believe that cesarean has the potential for long-term adverse health consequences for children."

The obvious and easy solution is to 'bathe' the babies with vaginal bacteria just after the c-section.


For the last few years, Clemente, along with Maria Dominguez-Bello of New York University and their colleagues, have been trying to replicate this process. Before a planned caesarean, they give women a sterile gauze, which is concertina-folded and inserted like a tampon about an hour before the surgery. Just before the women enter the operating theatre, the gauze is removed and bagged. Within 2 or 3 minutes of the baby being born, its mouth, body and anus are swabbed with the gauze.

This is already interesting in itself and a good information for women who will give birth with a c-section, but it is also interesting for someone like me who is always interested in the debate of how we disrupt the natural evolution with our science and procedures, often for the better but not always.

In the US in 1965, the c-section birth rate was 4.5%, in 2014 it was 32.8%(link). According to the Asthma and Allergy Foundation of America there are 26 million Americans who have asthma and it has been increasing since the early 1980s in all age, sex and racial groups(link). Over the last half-century the percentage of obese and overweight Americans has more than doubled(link). From 1980 through 2014, the number of Americans with diagnosed diabetes has increased fourfold (from 5.5 million to 22.0 million)(link).

Of course there are many other factors that lead to asthma, obesity and diabetes, like pollution, diet, genetics, etc., but this cannot be ignored.

Here is a chart of c-section rates in the world. 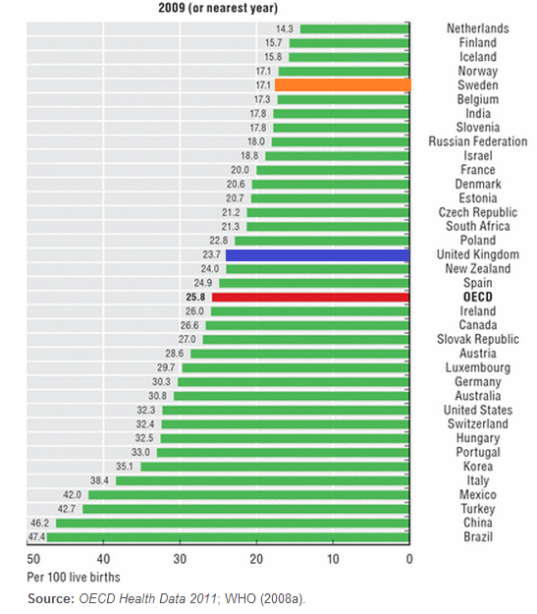 ETA- all of my children were born via c-section and they all have excellent health. My oldest was born at 27 weeks, and while she has very poor vision and 80% hearing loss, neither issue can be contributed to c-section. Her 'health' issues are due to medical error
edit on 10-2-2016 by onthedownlow because: (no reason given)

It could be for sure. But also many C-Sections are simply because of a previous one even when the pregnancy is not problematic. The is a movement away from the "Once a section, always a section" at least with some oB's

posted on Feb, 10 2016 @ 11:11 AM
link
My daughter was ready to come out at full term but my wife wouldn't dilate so c section it was.
She's as healthy as any parent could hope for.
I have heard that most c sections are not really needed and are only done as a precaution.

That is a valid point, but only if health issues really do play a factor. My wife's health was always the first priority

ETA- each situation is different, but skewed statistics might not be the best source for making decisions with possible real consequences. It is interesting how studies like the one in the OP create trends, even though there is no concrete evidence and the author of the study bears no accountability for the consequences. The study is interesting and I hope it opens the way to more thorough studies that way the pros and cons of both types of delivery
edit on 10-2-2016 by onthedownlow because: (no reason given)

posted on Feb, 10 2016 @ 11:46 AM
link
I knew the reason before reading the first paragraph. We populate our gut in large part due to the bacteria transferred when passing through the birth canal. That's one reason why diet is so important for a pregnant mother. Our diet influences these cultures.

This is where my mind goes immediately. I'm open to there being other contributing aspects related to C-Section births as well, but I feel as though perhaps there are factors indicating C-Section which also correlate to higher rates of the health issues in question. Or even other factors which happen to correlate with C-Section - perhaps breast-feeding is more common among natural births. I won't assume anything, and I'm glad they're looking at it, but I think a great many possibilities need to be considered before making any decision on whether it is something to do with the C-Section itself.


Both of my children were born via C-Section (I'm the dad) because dilation simply wasn't happening, and they're the healthiest children I've ever known, but of course that doesn't mean anything. Nobody is saying 100% of C-Section births have a higher rate of health problems. It does seem clear there is a higher risk though. A lot of studies and even more statistical analysis will hopefully get to the root of the problem.

My wife is too petite for a natural birth, and it would actually be dangerous for her and the baby to have one, Caesarean is our only option.

Fortunately we don't plan on having children for a few more years, if any at all, so that will allow medicine to catch up with this concept.

originally posted by: solve
a reply to: gosseyn

Could you cite that information? Sounds interesting.

Well it`s us, ourselves.

I think about stress often, among other things.

Haven't you seen the 5th element?

The stress brought on by UV radiation stimulates the body to take precautionary measures... it creates skin.

Phew, I was a 4 pound 6 ounce 'C section' twin back in the 70's and I haven't experienced any of the conditions described in the OP. Guess I was lucky.

Increased risk doesn't equate to likely, so no.

posted on Feb, 10 2016 @ 06:07 PM
link
Both of mine were c-sections. I'm so far past one-upping other mommies "birth stories" that A.) it doesn't make me feel guilty any more and B.) I simply don't give a fudge about how someone enters the world.

Mine have never been drastically ill, all they've had is minor colds once or twice a year. I think this study might be neglecting many contributing factors, such as pregnancy risk or issues, inherited allergies/sensitivities, etc.
I've run across plenty of kids who are just poster children for ill-health, born vaginally. I can't begin to count how many arguments friends & I have had over how my kids are going to be soooo sickly because c-sections, while their own are ill constantly but were born naturally. One could easily draw similar conclusions that state there was something missing in the birth canal that contributed to this, couldn't they?

Moral of the story is correlation does not equal causation.

Edit: And don't forget the arguments that breastfed = iron immune system. Another road my friends & I argued our way down. Same outcomes, mine generally don't get sick (formula kids) while theirs are often sick (breastfed kids) Did the study take into account either of those, too? This could easily wind up being a blame-game rabbit hole in short order with no clear cause in sight.
edit on 2/10/2016 by Nyiah because: (no reason given)

posted on Feb, 10 2016 @ 06:11 PM
link
this study is shows correlation and not direct cause, aka bad science or incomplete science. its may be the case c-sections are dangerous as well as it may be the case aliens exist in another galaxy. they're going to need more proof in my opinion.

originally posted by: vjr1113
this study is shows correlation and not direct cause, aka bad science or incomplete science. its may be the case c-sections are dangerous as well as it may be the case aliens exist in another galaxy. they're going to need more proof in my opinion.

That's exactly what the researchers are saying themselves.

im just clearing it up before this thread turns into a classic, doctors and scientists are evil. also lets think for a second who funds their research, id hate for the government to fund something that has no true traction, wasting millions on research that has no scientific or evidential foundation.

for example the anti vaccine people, always bring up correlation instead of direct cause. now they have a reason to start bombing or shooting vaccine clinics and factories, a very unscientific reason. interesting read.