Largest Animal Ever to Walk the Earth Arrives in New York 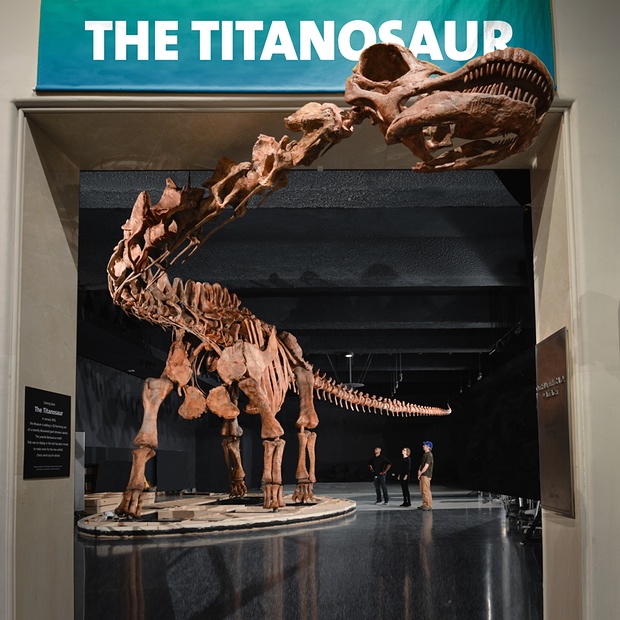 As some will know the as yet unnamed Titanosaur was discovered in Argentina back in 2014 and is at present the largest animal ever to roam the Earth , it's vital statistics weigh in at an impressive 122 feet in length , 20 feet tall at its shoulder rising to 46 feet with it's neck at a 45-degree angle.

The Titanosaur , or a recreation in this case , is now accepting visitors at the American Museum of Natural History in New York City , for those not content with just seeing a recreation the team have also lent the museum a few pieces of the original animal which include the dinosaur's humerus, ulna, radius and scapula.
Worth a visit if you have the opportunity to be able to appreciate the sheer scale of the beast and ponder the questions occupying scientists minds , like how did such a large animal walk on walked on tiptoes and how do you have sex when you weigh 70 tons ?


“The most important and exciting thing is to be able, for the first time, to understand a giant dinosaur as a living organism. And you need a fairly complete skeleton to do that,” said Pol.

The skeleton cast on display came from 84 fossil bones from one specimen, which despite its height was only a teenager when it died.

Installing the dinosaur inside its new home was the most nerve-racking aspect for Norrell. The skeleton only just managed to fit vertically; the roof is 19.4ft high, while the top of the dinosaur’s back reaches 19.2ft.

At least it was an herbivore.

posted on Jan, 17 2016 @ 07:29 AM
link
That´s amazing ! We know so little about these animals, what kind of surroundings they lived etc. Who knows maybe these laid eggs in the water like fish.. that would be simplier

Also if the earth trembled when they mated...

I am a simple man with simple questions

posted on Jan, 17 2016 @ 08:44 AM
link
Whats amazing is how they extrapolate an entire animals features from a few scraps of bone.

You ask me, they found some whale bones and went…."Thunder Lizard".

Whats amazing is how they extrapolate an entire animals features from a few scraps of bone.

You ask me, they found some whale bones and went…."Thunder Lizard".


I agree, just how do the figure this all out on a few bones?
Is it a WAG "Wild @ss Guess"?


Whats amazing is how they extrapolate an entire animals features from a few scraps of bone.


There were some big clues. 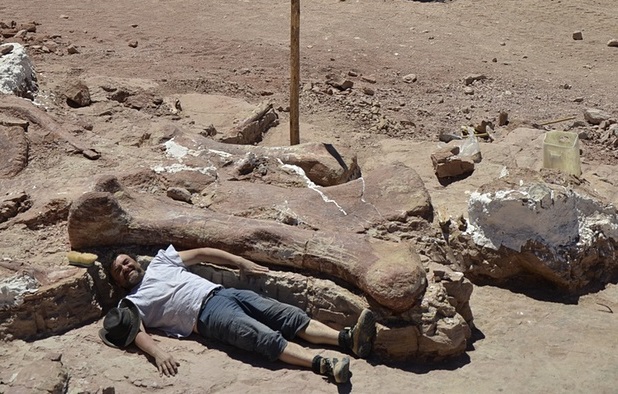 In total they excavated 223 bones from six of the animals.

That thing is huge (that's what she said!).

I wonder how much we'll learn about it in the coming years.

posted on Jan, 17 2016 @ 09:05 AM
link
Biggest to roam on land or is the blue whale the biggest animal still if we include water? Either way amazing creatures all of them.

Some fossil counterparts of modern critters are huge, dragon flies with two foot wing spans, fifty foot sharks and Ickysaurs-- I mean porpoises, how big would a whale be back then?

They are Giganticus today…

But, in the billions of years of evolution, if this is the biggest nature has to offer.... then there must be some kinda limitation based on gravity that limits breathing organisms from becoming too big..... cos i was expecting bigger, much bigger.... Godzilla big!

The Titanosaur beats the blue whale in size by 30 feet but the whale wins on weight.
1-1 Draw

Its not the heat, its the air…

I think this is probably getting to the upper limits of big boned animals but something larger may still be found , bone and the load it can bear I think are the limiting factor here.

posted on Jan, 17 2016 @ 09:20 AM
link
I am of the opinion (uneducated mind you) that oxygen levels were higher on Earth back then, allowing for big animals, plants, Titanosaurs, etc. Less oxygen now, and everything's smaller.

On a side note, that devil is a pesky, smart fellow, and he could have put these bones there too.


High Temps and co2 helped plants thrive setting a chain reaction for everything to grow larger.

posted on Jan, 17 2016 @ 09:32 AM
link
That's one hell of a beast, amazing to think they were around millions of years before God created the Earth.

Throw in big impactors and stir…