posted on Nov, 27 2015 @ 02:11 AM
link
The logic so far is the following.. I will use USA statistics but would apply world wide (there are 116 other recommendations of how to reduce gov spendings other then military )


Costs vs. Benefits. Economists will generally agree that government spending becomes a burden at some point, either because government becomes too large or because outlays are misallocated. In such cases, the cost of government exceeds the benefit.


reducing the size of government would lead to higher incomes and improve America's competitiveness.

cutting down on military


Active-duty soldiers receive compensation for their service in several ways: basic pay, health care, retirement, and additional non-pay benefits, such as education. In the past several decades, the cost for military personnel has grown drastically. From 2001 to 2012, the costs are estimated to have risen by 42 %


Reducing civilian overhead.. Since 2001, the total number of civilian employees in the DOD has grown 14 percent. During the same period, the total Active Military was reduced by 5 percent. Today, 36 percent of the DOD workforce is composed of civilians, totaling 782,000 people.


Cut Funding for Non-Combat Related Research The Defense Department has the largest research and development budget of the federal government, equaling just under $70 billion a year. While the vast majority of this amount goes toward developing advanced military systems or technologies that have battlefield applications, each year, the DOD spends money on various projects that have no reason to be


The DOD currently has an extensive and separate retail network to serve those in the military and their dependents. There are four different retail systems operated by the DOD. One of them, the commissaries, is a network of grocery stores, available to all branches of the military.


The Department of Energy (DOE) is responsible for the nuclear reactors and weapons that are operated by the Defense Department. Each year, the DOE is allotted about $16 billion to $17 billion to fund defense-related activities. 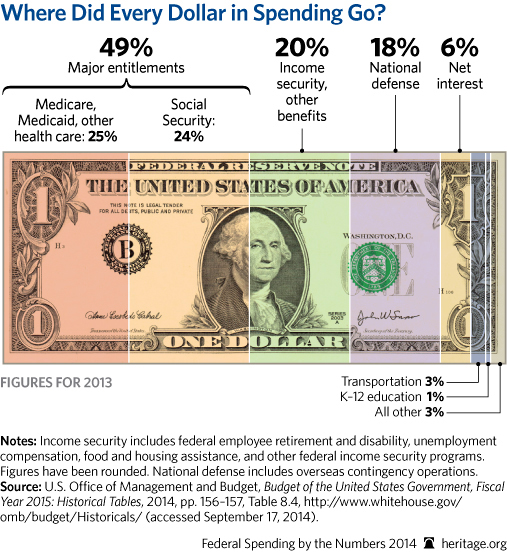 Does the Catholic church provide half of social services in the U.S.?
(Again I used USA but this is almost every country mixing religion and politics yaycks)
www.politifact.com...

no point in being enemies ..

Except while it's beneficial to all to be peaceful, you can't guarantee the others will, so you can't be peaceful either.

That is the next point

yes you can be peaceful and yes you can aim for good diplomacy .. It's is only a question of who is willing and who not

Like this Russia USA bickering can you imagine the potential if these two countries come together ? anyone who doesn't want to achieve and strive for that is basically only missing out and who misses out because of it.. back to the people

From the graphic in the post under your OP, if we even just cut "income security" which is a fancy way of saying - taking money from those who make it to give to those who don't - we'd save over national defense. Also, consider that because most of the NATO countries already have done what you suggest, a lot of our defense spending covers a significant portion of their butts too, we spend more there than we really should.

For the last 7 years, going on 8 now, we have had a president who thinks as you do. Look at what it's gotten the world. Our national debt has ballooned as we have sunk ever more into the entitlements domestically and cut defense spending. We now have a military smaller than prior to WWII, but we still try to cover the world. We have also steadily disengaged ourselves from the world, and it has descended into chaos.

A third thing to consider is the hidden costs of managing those entitlement programs. We don't just cut checks to people, we manage their lives and essentially their checkbooks and every program has a fully-formed government bureaucracy that is fully staffed with employees to manage it. We don't just pay for heat or rent or income ... we pay for the people who manage the heat or rent or income, and we pay for their retirement pensions and all the stuff that goes with it, and we pay them at higher than private sector compensation, too. Oh, to make it worse, they are often over-staffed and the offices are inefficiently run because they have endless supplies of taxpayer money.

So it's not just the bare percentage of the budget that goes to pay into the coffers for the stated purpose. What percentage goes to pay for program management? I'll bet that isn't factored in at all and that's a hidden leviathan no one ever thinks about, but it's significant.

Why don't they come together?

Because what might be good for one isn't always what is good for another.

We now have a military smaller than prior to WWII, but we still try to cover the world. We have also steadily disengaged ourselves from the world, and it has descended into chaos.

let the world be in chaos
why should a USA tax payer pay for it .. look out for your own is one way to fix .. if you are concerned for the world you can combine available resources to aim for peace

it reminds me of divorce settlements .. even if you hate each other as individual you should do what is best for the kids


I always wondered why don't they at least assign voluntary jobs to people on welfare ..
edit on 27-11-2015 by Layaly because: (no reason given)

Are you suggesting this is a good state of affairs right now? Streams of people pouring across the globe?

Peace and stability bring wide prosperity and that brings improved standard of living. Like it or not we as a country are not as economically independent as we should be, so when the world burns, we suffer too.

The situation is as is
But the question is if you erase the past .. from this point forward would you be willing to

This is what they want us to believe.

Maybe the cost of Medicare would be lowered if they focused on the CAUSES instead of relying on Big Pharma to heal us! The FDA should do it's job for the people instead taking bribes.

Well that's categorically false, and my numbers might be a little old, because a general purpose 500lb bomb costs around $300. But that's just being nitpicky.

Obviously a guided bomb will cost more, But you get what you pay for, which is hitting the target with one bomb instead of carpet bombing the whole place.

originally posted by: Wardaddy454
Well you weren't wrong at first...


Now, that chart is a little deceiving. The money in the Social Security fund is seperate, paid by employers and employees. So is the medicare. Just because the government borrowed out all that money to fund things it probably did not need is not an excuse to use it as a liability on the people.

The medical costs are out of control, there are too many people utilizing the medicare. There is something wrong in our food system and chemicals in our household environment. The military expenditures for soldiers pay is nothing, they are spending way to much on technology which goes to big contractors.

If you examine the expenditures, you will find that people in the medical trades and in technology are making a hell of a lot of money. Most of the money is going back into supporting jobs in the middle and upper middle class and of course insurance companies. May be we should work on society to quit wasting the government's money and creating new ways to tap into it. Remember, retirees have to pay for Part B and also have deductibles and are spending money on supplementary insurance and Pharma drugs. We need our people to be healthier to keep costs down to the government.

build more conmunity gardens people on welfare should be asked to take care of them it's another idea maybe.. It won't heal people I understand but it might help mentally .. assist homeless ..

Thank you for the replies .. talking won't help I understand but it's good to see what people think