Swedish village at war with migrants housed in emergency center.

Well this is just crazy. It states that tensions are so bad that police are having to escort children to school. Swedes are spitting on these kids, what the hell? I was under the impression that this part of the world was pretty tolerant.

You never know with the Daily Mail, however the part about protesters setting fire to 17 immigration centers in the past 60 days I would think would easy to verify.


The problems are said to have begun in September when migrants started throwing stones at locals' cars, and residents retaliated by throwing them back.
The fires were further stoked on social media - and eventually locals, thought to be teenagers, began organising 'events' where a gang would gather to throw stones at the block of flats which has been turned into a makeshift migrant centre.
Mr Petterson said: 'This went on for about two weeks at a low scale, almost every day. It escalated windows at the centre were smashed.
'This scared the migrants. They had come from Syria - from a war zone - to this.'
The following day a car belonging to a refugee family was set on fire.

Can some members elaborate on what is causing the tension besides racism? I did see in the article a local "councillor" gripes that they pay the highest tax rate in the area which he blames on the refugees.

Metallicus
+34 more
posted on Nov, 25 2015 @ 04:05 PM
link
I guess people don't like having potential terrorists imported into their neighborhoods? Maybe the idiot politicians should have asked their constituency what they wanted. You know...those people that voted for them that they are supposed to be representing?

Well. That is what you get.

I live in Denmark, and honestly, we have an interview with a muslim living in a refugee camp.

Don't worry. They speak english. NOTE: The guy to the left stands in a t-shirt, albeit the guy talking says it's cold.
They also state "They thought Denmark was a rich country."
They aren't coming because of peace, but to get welfare. Period.


This also happens in the rest of Europe, and everyone is sick of it.

Deny Arrogance
+22 more
posted on Nov, 25 2015 @ 04:07 PM
link
Once again, the muslims started it and then act surprised when people actually fight back.

originally posted by: Deny Arrogance
Once again, the muslims started it and then act surprised when people actually fight back.

This is so true.

Muslims keep doing #, when it backfires they use the racism card. I haven't as of yet, met a single muslim who could argue for their cause, without either begin to threaten, or begin to throw with mud. Savages.

People are angry and since the politicians are hiding in a mansion somewhere people are targeting the foreign invaders instead.

It's human nature to fight back.
edit on 2015/11/25 by Metallicus because: Corrected auto-correct

Sweden: Rape Capital of the West

In 1975, the Swedish parliament unanimously decided to change the former homogeneous Sweden into a multicultural country. Forty years later the dramatic consequences of this experiment emerge: violent crime has increased by 300%. 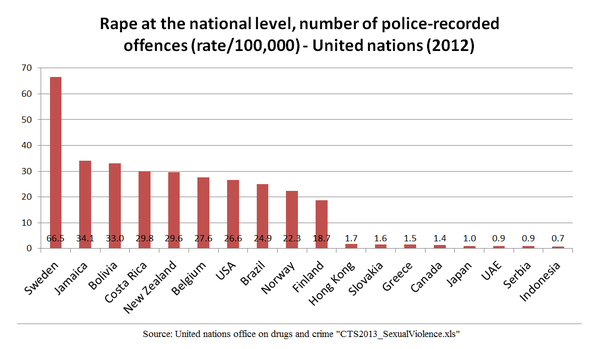 One out of every four Swedish women being the victim of rape.

The escalation of rape in Sweden is so bad that in July of last year there were an average of five rapes a day reported in Stockholm. Think about that for a minute; five women being raped a day in a modern civilized city. This isn't Afghanistan or Mexico we're talking about; it's Sweden.

The fact that the quantity of rapes is increasing due to the increase of Muslim immigrants is in itself disturbing. As of 2008, Sweden's rape statistics were up to 53.2 per 100,000 population. Sadly, they are most likely higher as the Muslim population continues to grow without any willingness to assimilate into Swedish society.

The only way to fix such a problem is either halt immigration altogether, or to bring down the law on Muslim immigrants who are unwilling to obey. However, such actions force Swedish officials to recognize the root of the problem - Islam. And we all know how government officials react to that.

originally posted by: Daalder
a reply to: Metallicus

You just hit the nail right on the head. Well done.

Spitting is rude, but if it makes them scumbags what do you call someone that murders a hundred innocent people with an AK-47? I prefer the scumbag.

I perfer the scumbag too, and in my world zero Islamic terrorists are acceptable. Having said that, we don't spit on children no matter how angry we are if I got a problem I take it to the problem and to someone who can fight back, not a child or a woman.

Gotta be one or the other has it?

originally posted by: SergeantSmoke
Can some members elaborate on what is causing the tension besides racism?

Not "race" its culture.

Two incompatible cultures being forced to live together. The end result will always be both sides acting badly.


I guess people don't like having potential terrorists imported into their neighborhoods?

For real man? Islamic extremists make up such a small percentage(depending on the statistics you look at)of the Muslim community(which is close to 2 billion,extremists make anywhere from 14% to 0.0006% in other Muslim countries) and most of the Islamic terrorists are homegrown in europe.

Yet you brand all Muslim migrants as potential terrorists...
edit on 25-11-2015 by NateTheAnimator because: (no reason given)

Not to mention who does the most crime, who is the biggest scumbags etc.

We have Ghetto's in Denmark where the police barely dare go to. Guess what kind of people dominate these ghetto's? Yup. Muslims.

They even throw rocks at firemen, assault paramedics, threaten the police. They don't care, worst scenario for them is to get inside a comfy prison.

What we need is laws AGAINST these kind of people, it would be racism, but clearly muslims need to be held in a short leash. Most atleast.

edit on Wed Nov 25 2015 by DontTreadOnMe because: trimmed overly long quote IMPORTANT: Using Content From Other Websites on ATS


What we need is laws AGAINST these kind of people, it would be racism, but clearly muslims need to be held in a short leash. Most atleast.

Does this apply to just Arab Muslims or does this "proposal" of yours apply to all Muslims regardless of nationality,race and ethnicity?

Just asking for some clarification on your part.

When the terrorist attack happened in Paris, the news on the social media was flooded with it, ofcourse. Muslims didn't write "Pray for Paris." But more like; "Oh, so what about the other places where bombs fell?" "Why is this more important?"
The worst part in this is, that when confronted with this, the muslims would go to counter attack and write stuff like "I hope this country get hit next time" and "When you throw bombs at muslims you better be prepared to be bombed!"
They even sympathized with terrorist, and some ven hoped for this country to be bombed.

Why would anyone want to have these kind of people in their country?