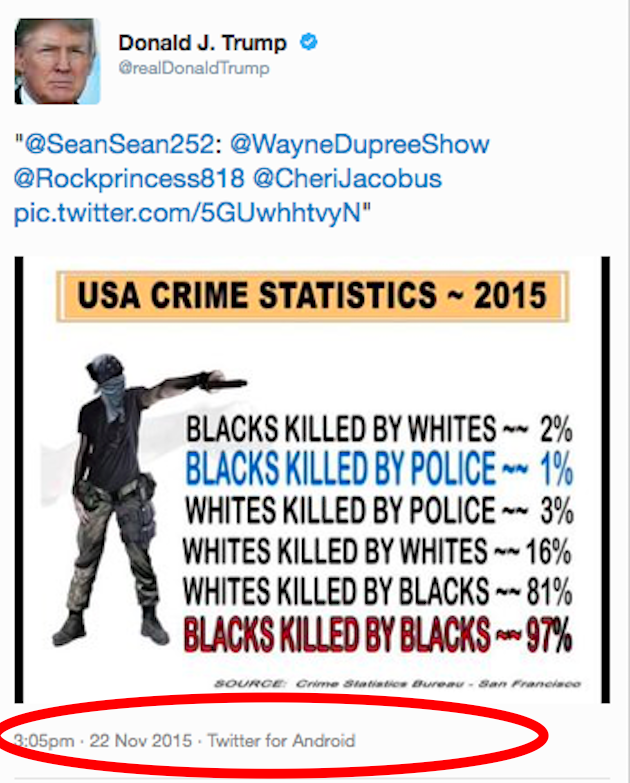 The fascinating thing is that instead of a blaming the tweet on a subordinate—something they haven't been shy about doing in the past—the campaign has chosen to stay silent about it. They have apparently made the political calculation that it would be worse for Trump to acknowledge not sending the racist tweet than to endure a few days of stories about how racist he is.
www.motherjones.com...

Trump have a big problem managing his staffers, yes he is obnoxious to the x10 as well as callous, am sure someone must have posted yet another protester getting beaten up at one of his rallies and the thin line of having no filter and being anti P.C is blurring the line between fact and fascism , It is in line with his Mexicans are rapist bit, ok he didn't tweet this himself but this is not the first time his staffers did him dirty.
Just imagine he is POTUS and his handlers sent out stuff he never actually said causing him to act irrationally on any issue of life or death importance.
edit on 24-11-2015 by Spider879 because: (no reason given)

He's allowed to make mistakes he is not a professional liar.

We need a leader.

And, if you're one of the millions scamming America waiting for a check every month.

ADD...I wasn't suggesting OP was ripping off America. My comments were in general.
edit on 24-11-2015 by whyamIhere because: (no reason given)

He's allowed to make mistakes he is not a professional liar.

We need a leader.

And, if you're one of the millions scamming America waiting for a check every month.

ADD...I wasn't suggesting OP was ripping off America. My comments were in general.

Yes we need a leader, but one with sense this is the kind of calculated mistake that will cause some nut to randomly shoot up a church , for while he didn't send it he let it sat.

What leadership does this show? Sounds to me like he is pushing a divide.

If making a mistake disqualified every candidate from being President we would have no President. The last two Presidents especially.

originally posted by: Metallicus
a reply to: Spider879

If making a mistake disqualified every candidate from being President we would have no President. The last two Presidents especially.


If this was the first or second tweet of this kind I'd say meh...but it's on going and always from his staffers, if he can't call a general meeting and say whatever is sent out have to be fact checked and then sent to me for approval ...UR FIRED!!!!!
Like I said he is already obnoxious and fact free on his own.
edit on 24-11-2015 by Spider879 because: (no reason given)

What leadership does this show? Sounds to me like he is pushing a divide.

Trump is clumsy. He is not yet Presidential.

He is learning. I hope he can learn discernment.

If he doesn't. He has no chance.

posted on Nov, 24 2015 @ 01:53 AM
link
I'm not American, but I've been following all the racial tensions in the US over the last few years with great interest. It only seems to be getting worse and quite frankly, more ridiculous.

Actually it's a bit scary how the media is perpetuating the whole black vs. white concept. They do it because controversy sells - if a white guy is killed by cops it won't raise much of a stir, but if a black person is killed by the police, you guys start rioting in the streets in total ignorance of the real issue, which is excessive force being used by the police. The ethnicity of the victim should be totally irrelevant. It's almost surreal how so many people so very easily fall for the media's race-baiting tactics.

In light of the recent race-based protests and riots, an even bigger racial divide seems to have emerged in the US. So when some nitwit like Donald Trump comes along and says something which appeals to certain white people and denigrates black people, it's actually going to net him more supporters - the sort of people who will latch on to anything they can to support their confirmation bias.

Looking at the US from an outsider's perspective is like watching a soap opera. Obviously not all Americans are stupid enough to be duped by the media's psychological tactics, but many are unfortunately fooled. They are pretty effective tactics. Every time, without fail, if I mention something negative about the US I'll get people up in arms attacking me, but it's an undeniable fact that American culture revolves entirely around money - the media says whatever will get people's attention and therefore bring in more profits, prescription drugs are advertised on billboards, universal healthcare is considered an abomination, people support some racist rich guy for president simply because he's rich, and so on.

And by the way, I don't see anything at all related to Neo-Nazism here. Racism maybe, but Neo-Nazism is an actual political ideology rather than some offhand comment that offends a few people.

Because if so, while they are racially profiling, which is political suicide, they do represent some disturbing facts.

originally posted by: markosity1973
I don't support racism of any kind, but not being American I don't know, so is there any truth in those statistics?

Because if so, while they are racially profiling, which is political suicide, they do represent some disturbing facts.

They're not true at all.

That's why it's been highlighted Donald Tramp should do some fact checking.

I guess that is a fair enough stance. Not sure clumsy is the word, that implies it was an accident.

posted on Nov, 24 2015 @ 02:25 AM
link
Looks to like he'll do or say anything just to be the elected president.
He don't care about rascism. He cares about him and his presidency.

posted on Nov, 24 2015 @ 02:28 AM
link
Really people for a conspiracy site the trump supporters really are buying the bull#!

He is pandering to you! Cant you see it?

He is there for 2 reasons!

Split the vote and to make Hillery and Bush look palatable.

A vote for him is what TPTB want.

Well if he can't get that right, he sure can't be trusted with the oval office then.

Getting things like that wrong can cause civil wars
edit on 24-11-2015 by markosity1973 because: (no reason given)

So you're saying he's an habitual amateur liar? Here's but a few from Politifact

"They send them to the Republicans, not to the Democrats, you know, because they know the problems," Trump said on Nov. 17, 2015. "In California, you have a Democrat as a governor (Jerry Brown). In Florida, you have Rick Scott (a Republican). So you know they send them to the Republicans because you know why would we want to bother the Democrats? It's just insane. Taking these people is absolutely insanity."

Quick: "You have talked a little bit about Marco Rubio. I think you called him (Facebook founder) Mark Zuckerberg’s personal senator, because he was in favor of the H-1B visa."

"The last quarter, it was just announced, our gross domestic product -- a sign of strength, right? But not for us. It was below zero. Who ever heard of this? It's never below zero."

It's not even just that he's lying/wrong/employs a lot of idiots — what really should be concerning is that he's pandering to the self-righteous indignation, irrational fear, intolerance, xenophobia and racist tendencies of a perverse nationalist movement that exploded into the mainstream during the 2008 elections.

He's not a leader, he's a bloviating hate monger and everyone with the exception of maybe a quarter of American conservatives, sees him for what he is.

originally posted by: Vector99
a reply to: DeepThoughtCriminal

I'm sure I'll catch a warning and a post remove for this, but it's because only the Blacks feel the need to "protest" (aka looting, lawlessness, recklessness, anarchy, etc). It's not protesting, it's not even mob justice, because the ones affected were not the perpetrators.

You NEVER see white people protest like black people do. You all know exactly what I mean.

This is why his moronic staffers retweet garbage like in the OP — because it plays well to whiny bigots.


And by the way, I don't see anything at all related to Neo-Nazism here. Racism maybe, but Neo-Nazism is an actual political ideology rather than some offhand comment that offends a few people.


Tweeted lie was ultimately traced back to a Neo Nazi site,
As for crime statistics in America real or imagined , it is oft misused to justify LEO's mistreatment of minorities especially AAs and Latinos, this have many deadly consequences ,over what would be something minor in the larger majority communities , Pols say they are being tough on crime, minorities say they are being trampled on which can lead to protest or descend into violence but I'd challenge anyone that before you get to the eruption of violence one is sure to find years of governmental abuse , and these revelations do not start in mainstream media but new media,mainstream usually follows them, for today everyone gets to be Walter Cronkite .
edit on 24-11-2015 by Spider879 because: (no reason given)