page: 1
33
<<   2  3 >>
log in
join
share:
theantediluvian
+13 more
posted on Oct, 4 2015 @ 08:12 PM
link
All too often the most virulent disinformation comes from sources claiming to expose the disinformation in mainstream media. As I see it, among the most significant issues with the majority of political blogs and other alternative outlets are:

1. Consumers tend to give these outlets the benefit of the doubt because they claim to reveal 'the truth' hidden by the MSM boogeymen. This is particularly true in the case of conservatives who believe the mainstream is dominated by a 'liberal agenda.'

2. Regardless of the accuracy of the content, there's very little accountability since consumers tend to have remarkably short attention spans and advertisers are either permissive or complicit in the spread of disinformation for propaganda purposes.

3. Outlets aggregate from one another which reinforces the apparent validity of disinformation, makes it harder to source and debunk, far more difficult to remove and insulates the reputations of those outlets that republish disinformation.

Just like with the big boys, the most successful outlets are those that churn out the highest volume of sensational headlines. Unlike the big boys, there's no real downside to being wrong or flat out lying.

Simply put, it doesn't pay to have standards.

Over the last 48 hours, an image purporting to show the 'whitening' of the Oregon shooter by CNN has gone viral. A brief sample of the repititions of this bit of disinformation can be seen at the following (even Fox's Megyn Kelly gets into the action since her blog republishes from The Gateway Pundit):

All of the above (and dozens more) outlets cite a single source for the image and the allegation, this post at The Conservative Tree House, which contains the following image and claims: 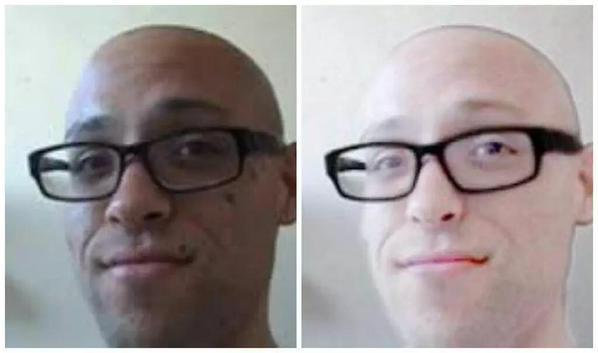 On the left is the selfie Christopher Mercer uploaded to his social media. On the right is how CNN presented the same selfie in broadcast stories about him. Why did CNN need to change the complexion (color) of their broadcast? Why is no-one showing pictures of mom, Laurel Margaret Harper.

What is lacking is any provenance for the image. No source video is linked and in fact, no information at all is provided. Fortunately a little Google sleuthing turned up the likely source. Rolling over the publish date of the blog post, you'll see that it was published at 10:29 PM on October 2nd. Searching Google Images by image and looking for occurrences of the image on the 2nd and before, I found what appears to be its origin, Twitter user andieiamwhoiam's tweet at 12:03 PM (EST, my timezone), Oct 2nd which can be viewed here. The tweet reads:

"The #UCCShooting killer was a black male. Look what the media did to his photo."

As of now, the tweet has 1519 retweets and has been favorited 703 times and andieiamwhoiam has 2,896 followers. If you scroll down a bit, you'll see an exchange where another Twitter user asks about where the image came from (link):

"andieiam ‏@andieiamwhoiam Oct 2
@LadyPatriot777 I copied it from a liberal Tweeter. I wish I knew how popular it would become."

"LadyPatriot777 ‏@LadyPatriot777 Oct 2
.@andieiamwhoiam A liberal tweeter??? I would have thought no liberal would send out something like that! Which tweeter??"

"andieiam ‏@andieiamwhoiam Oct 3
@LadyPatriot777 The whiter photo only. I was so mad I copied it and found an actual photo online. Then I put them together."

So here we have the earliest appearance of the image indexed by Google, a heavily retweeted tweet, and an admission by the person who tweeted it that she created the image used by the Conservative Treehouse. Andieiamwhoiam of course blames a "liberal Tweeter" whose name "she" (who knows?) can't remember even though "she" claims that "she" was so incensed by it that she immediately searched and found the source image, Photoshopped it next to the lighter image and Tweeted her composite image. Notice that the scale/cropping/etc are identical, so either "she" found an exact copy of the source, cropped out exactly the same pixels as those used by the phantom tweeter from a larger image or simply pasted her own doctored image next to the source she created it from.

As a bit of a bonus dear friends, I also came across a deleted post from The Gateway Pundit from October 1st entitled
BREAKING: Internet Trolls Altered Chris Harper Mercer’s Online Profile Today – Now Says He’s “Conservative” that is cached here. That deleted post has an embedded tweet from The Gateway Pundit (Jim Hoft) that has also since been deleted.
edit on 2015-10-4 by theantediluvian because: (no reason given)

As always Theant! A fine thorough investigation of what many of us believed to be true. Excellant work & research! Thanks for sharing!

Didn't believe it and spotted it for disinfo. But I appreciate you bringing up that it was a total disinfo story.

Now what was it meant to discredit, obfuscate, or detract from in the last 24 hours or so?

posted on Oct, 4 2015 @ 08:23 PM
link
Well done dude S&F it appeared fishy from the get go because no evidence was put forward that the image was ever on CNN.
I hope you get applause from many mods.
i hope btw the OP from the original thread comes in this thread and acknowledges his error.

it does raise other questions though why was a right wing website pushing this lie?.
edit on 4-10-2015 by boymonkey74 because: (no reason given)

posted on Oct, 4 2015 @ 08:29 PM
link
I bet shooters come in all shapes and sizes. It is interesting to see how everyone wants to portray the shooter as sympathetic with their political opponents instead of just being interested in who the shooter really is.
edit on 04pmSun, 04 Oct 2015 20:29:56 -0500kbpmkAmerica/Chicago by darkbake because: (no reason given)

posted on Oct, 4 2015 @ 08:38 PM
link
The bad news is that we ARE starting to see a trend here & have for almost a decade. Here is an important trend. Of the 12 deadliest shootings in the United States, six have happened from 2007 onward.

If this does not concern us as U.S. citizens, we are in for a troubling future

It's important that 'suspect zero' be identified and everything they've posted be looked at. They are planting disinfo online and whatever they've planted online prior to this event might be revealing and enlightening. Ha! to me, anyway!

Reminds me of Sandi Hook. One shooter... nope sorry two one in custody. .. what Christmas trees.... are they just walking in circles??

You do know that people can make mistakes and report wrongly especially when tension is high and facts are sparse.
I would be more concerned If we didn't have conflicting reports.

It was intended to be exposed as disinfo.

The flames are always being fanned.

Agreed,however; just as we on ATS must provide bonafide verifiable sources, it would be nice if the media (who owns a much broader audience) would be held to the same if not higher standards. Again, something that we do not/will never have control over. Hence why we are all (most of us) here, seeking truth.

Thanks for edifying BM.

Thanks! I just hope that people who see these sorts of examples will be more critical of what they read from blogs masquerading as journalism and start calling these clowns out for their BS.

Agreed. Remember, "Strength in Numbers"... we must question everything. ...

Some fine investigative work there, congrats and thanks. I saw the two pics side-by-side on another website but didn't think much of it, photoshop being what it is, and kept looking to ATS to give me the correct info. And not only have you done it, you dug it up from parts unknown and reported on the genesis of the hoax. Nice work.

Looks like, perhaps unsurprisingly, it originated on 8chan......
edit on 4-10-2015 by ThinkMoreBetterer because: (no reason given)

I saw the Infowars article and believed it...So thanks for clearing this up. I am one of the ones who really needed this pointed out.