page: 1
43
log in
join
share:
Metallicus
+26 more
posted on Sep, 10 2015 @ 02:22 PM
link
I don't normally applaud the French for much, but France and most of their European neighbors are WAY ahead of the US in condemning and fighting against the 'Great Satan' of our time...Monsanto. A French court was willing to hold Monsanto responsible for poising a farmer with one of their many toxic products. Something like this will NEVER be seen in the US thanks to things like the Monsanto Protection Act and a bunch of bought and paid for politicians.

A French court upheld on Thursday a 2012 ruling in which Monsanto was found guilty of chemical poisoning of a French farmer, who says he suffered neurological problems after inhaling the U.S. company's Lasso weedkiller.

The decision by an appeal court in Lyon, southeast France, confirmed the initial judgment, the first such case heard in court in France, that ruled Monsanto was "responsible" for the intoxication and ordered the company to "fully compensate" grain grower Paul Francois.

Francois, who says he suffered memory loss, headaches and stammering after inhaling Monsanto's Lasso in 2004, blames the agri-business giant for not providing adequate warnings on the product label.

posted on Sep, 10 2015 @ 03:35 PM
link
Thank you for posting this, and I have to say that France is making a precedent by directly implicating Monsanto in the personal suffering of a French farmer, Paul François, a cereal grower who became handicapped after inhaling fumes from an herbicide made by Monsanto called "Lasso" on the European market. This same herbicide was taken off the Canadian market in 1985 and then subsequently banned in Belgium and UK.

So that is just how far the US is behind Western Europe and other countries -- it is indeed because Monsanto has lobbied and won so much protectionist legislation in the US.
edit on 10-9-2015 by antoinemarionette because: words, words, words...

Next up to bat: pharmaceuticals
On deck: Vaccines

posted on Sep, 10 2015 @ 04:08 PM
link
I think anytime a company doesn't list a warning on their product and it causes harm it should be held liable.

So there were no warnings at all on the product about inhalation?

Here is the product database on Lasso. link


That will require some peer reviewed testing.

posted on Sep, 10 2015 @ 04:58 PM
link
This could get interesting but don't forget that we ARE talking about France and if a farmer has a dose of something like Lasso in the barn then he's going to use it rather than pay to replace it. If monsato wish to appeal this then I can see hoardes of angry agriculteurs brandishing pichforks and burning tyres outside a courtroom....It's how they do things over here.

I have NEVER seen a farmer wear a mask around a farm or while using a tractor that sprays "product".

I live in the thick of it and I HAVE SOLD MY HOUSE AND MOVE OUT IN A FEW DAYS TIME...YAAAAAAY! No more will I have to breathe in the constant barrage of toxins sprayed on a regular basis to maximise yield and profit.

It wouldn't be so bad if it was to actually feed people with the end product, but the majority of what is grown in this area is either for cattle feed or biodiesel and every available square metre is manicured to produce. No hedgerows, occasional clumps of woods, machines everywhere.

Viniculters are even worse as the spraying is more often. Copper sulphate to keep snails and mould at bay, and weedkillers to reserve what little rain that falls in summer for the vines (it is illegal to water vines unless very young).

While France may be Europe's only self sufficient country when it comes to food production, it comes at a price.

Let's not just ban monsato's toxins, let's ban MOST of them and save a few more ignorant lives. I'm sure that's why there are so many grumpy farmers and vine workers...all those neurotoxins year after year. They work hard doing the same things their whole lives and so often die young. France is full of farmers widows.

For me, my pastures new await, and they are literally that. Natural fields, more animals grazing, more wild, more forest. It's been a VERY hard and long road to make this move and change, it almost broke me but I'm getting there after much patience and the usual forced wisdom.

posted on Sep, 10 2015 @ 05:30 PM
link
Good on the French. They already expressed concern over vaccinations also just like Italy and other EU states.

The EU is finally waking up to corporate greed and corruption...well, its a start at least.

That will require some peer reviewed testing. 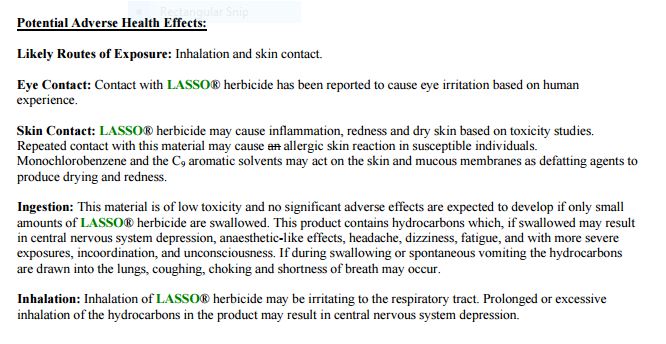 Under inhalation it says:

Inhalation: Inhalation of LASSO® herbicide may be irritating to the respiratory tract. Prolonged or excessive
inhalation of the hydrocarbons in the product may result in central nervous system depression.

Lol! You are right about how they do things here!

Congrats on your change in home!
Hope you will be happy there!
There are places here which are more sane. We are in Ardèche, where everyone has their own water source, and they are not treated, so no one dares to use chemicals that might get into the water tables.
We even refused the fracking here. People grow their veggies and fruit for themselves and their neighbors, and they have smaller numbers of livestock and fowl, for more personal or local production, which they tend to with care and don't need things like systematic antibiotics or hormones.

For the health- it's great. This region doesn't even have a train station or airport in it.
On the other hand, if we didn't have internet for some intellectual stimulation, I think I'd go insane.