Seems as if the Chinese are getting ready to let the world in on ET. Its really about time governments fess up

VIA| Dr. Micheal Salla has indicated that there is a Military Industrial Extraterrestrial Complex or MIEC, and that Earth is being assimilated by an alien agenda which also operates on Earth’s Moon.

The photo below is similar to many that I myself have seen. It appears that the Chinese who took the photo, have confirmed that aliens exist. The Chinese have probably been in contact with these aliens already. “I was sent some pictures by a source who claims China will be releasing Hi Res images taken by the Chang’e-2 moon orbiter, which clearly show buildings and structures on the moons surface. He also claims NASA has deliberately bombed important areas of the Moon in an effort to destroy ancient artefacts and facility’s.

“Pictures yet to be released clearly show nuclear impact craters and building debris caused by explosions in an effort by NASA to destroy the truth. China is moving toward full disclosure of the Extraterrestrial reality, if these images and future ones are verified genuine then NASA should be investigated for fraud and treason. China will be releasing all the data and images from the Chang’e-2 in the coming weeks and months, lets hope this is the beginning of a new era.”

This brings me back to Sgt Karl Wolfes Interview...I believed him when i heard it for the very first time
YouTube Link
youtu.be...
edit on 9-5-2015 by SPECULUM because: More cowbell

All I see is another blurry photo and a bunch sensationalism.


But ty for the thread nontheless .

You're doing it wrong. You've forgotten to apply your imagination.

originally posted by: Kapusta
a reply to: SPECULUM


But ty for the thread non the less .

Just fly to the moon Dude...its there, i Swear


originally posted by: Kapusta
a reply to: SPECULUM


But ty for the thread non the less .


Just fly to the moon Dude...its there, i Swear

originally posted by: WakeUpBeer
Where exactly are the Chinese confirming anything?

All I see is another blurry photo and a bunch sensationalism.

Well Supposedly they released this and other photos. Who said anything about any conformation?

The article said, "It appears that the Chinese who took the photo, have confirmed that aliens exist". It's stated and implied the Chinese have confirmed alien bases on the moon, and will be releasing the proof positive to the rest of the world. It's sensationalized click bait, and I'm not buying it.

But they didn't, did they?

posted on May, 9 2015 @ 10:30 PM
link
Did you know that NIXON was the only President to send men to the Moon, and he was pushed out of office, never to stand for reelection.

Despite the fact that before Watergate he was actually a pretty popular President, and did a lot of good for the USA (Like massive expansion of National Parks, Exploration, and the EPA).

TPTB (and yes, there are people WAY more powerful than the President) wanted him out, and in a hurry.

If they found something on The Moon that wasn't supposed to be there, it might help explain why Nixon is now remembered in nothing but a negative light.

When you really, really look into who was a great President and who was terrible, Nixon actually turns up as "Great" and Lincoln comes out as worse than Bush. If it weren't for the Emancipation Proclamation, Lincoln would have been remembered as a TERRIBLE President if solely based on his record.


and he opened the door for all those fabulous chinese products that now flood our stores.

originally posted by: WakeUpBeer
a reply to: SPECULUM

The article said, "It appears that the Chinese who took the photo, have confirmed that aliens exist.". It's stated and implied the Chinese have confirmed alien bases on the moon, and will be releasing the proof positive to the rest of the world. It's sensationalized click bait, and I'm not buying it.

But they didn't, did they?

Oh, well, there you are then

originally posted by: SPECULUM
Seems as if the Chinese are getting ready to let the world in on ET. Its really about time governments fess up

It really shows people like to repost old nonsense here!

posted on May, 9 2015 @ 10:55 PM
link
I doubt that aliens are on the moon. It is more likely that those buildings are real old and were built by ancient advanced humans. Of the two choices, the latter is more logical.

oh his hand was being guided by the Dark Sith Lord, Henry Kissinger in that day.


Kissinger sought to place diplomatic pressure on the Soviet Union. He made two trips to the People's Republic of China in July and October 1971 (the first of which was made in secret) to confer with Premier Zhou Enlai, then in charge of Chinese foreign policy.[22] According to Kissinger's book, "The White House Years", the first secret China trip was arranged through Pakistan's diplomatic and Presidential involvement that paved the way to initial vital contact with China since the Americans were unable to communicate directly with the Chinese leaders because of earlier cold relations. Kissinger would show his support for the regime in Beijing by supporting their actions during the unrest which included the Tiananmen Square Massacre.[23]

This paved the way for the groundbreaking 1972 summit between Nixon, Zhou, and Communist Party of China Chairman Mao Zedong, as well as the formalization of relations between the two countries, ending 23 years of diplomatic isolation and mutual hostility. The result was the formation of a tacit strategic anti-Soviet alliance between China and the United States.

While Kissinger's diplomacy led to economic and cultural exchanges between the two sides and the establishment of Liaison Offices in the Chinese and American capitals, with serious implications for Indochinese matters, full normalization of relations with the People's Republic of China would not occur until 1979, because the Watergate scandal overshadowed the latter years of the Nixon presidency and because the United States continued to recognize the government of Taiwan.


I mean Nixon just kind of made it formal for the public. Kissinger was doing it all behind the scenes, AND SUPPORTED CHINA during the Tiananmen Square Massacre. Sith lord indeed, he brought upon the beginning of the fall of the Republic.

A host of countries or their armed forces have already acknowledged or alluded to the existence of aliens and encounters with them anyways.Even The Vatican entertains the idea.

And of course, I have believed ever since the X-Files when I was but a wee lad. I think if China does it, it will be specifically to show the world that the West and NATO have basically been lying and clandestinely working to cover it all up. And of course they will pile it on top of the global instability from perpetual warfare against mostly defenseless nations, financial abuse and the consequences to the markets, failed drug war and so on in an effort to get everyone on board to an "honest reserve currency". I got my first Chinese gold recently, a 1988 1/4 ounce Panda. Nice too.

I wish the Mint would make 24k refined god bullion in fractionals. As it is they only do fractionals in the 90% gold eagles, or 24k in the one ounce buffaloes. How can I invest in my country if they are limiting my options???

This story actually broke a couple years ago. You can read about it here: www.veteranstoday.com...
Many accusations there about deception and coverups by NASA.

There's also a tower up there: 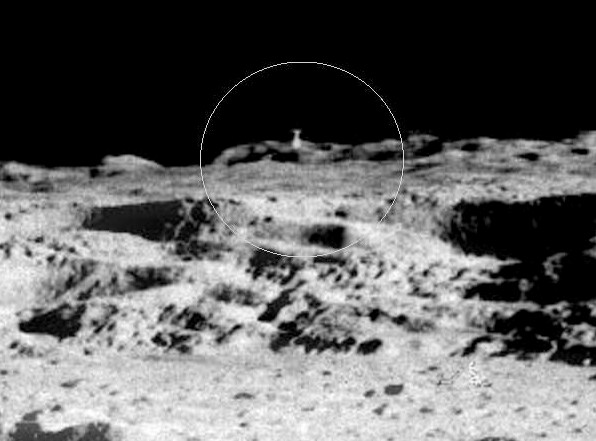 It's approx. 13 miles high, 4 miles in diameter at the base, and the dome top is three miles in diameter. Could this be one of the structures that Karl Wolf alluded to, being discovered and subsequently hidden before the lunar landing took place in 1969?

Thanks to Salla for bringing this, as well as other information to attention although it really isn't anything new. Rumored alien bases on the moon have been circulating since forever it seems.

I remember John Lear preaching to the choir about this years ago. Those were the good ol days.

Ok hey I am not against the theory there is a base on the moon. I believe our world governments have a presence up there in some way. But that image man, that tower, I am not buying that for a dollar. That is a very deceptive image from my observations.