What is with the recent addiction to the use of the word "thug"?

Gives people a mental hard on.
A mindfilled semi.
A psychological erection.

If their keyboard was in their underwear they'd release all in their pants.


That's possibly the most ill-conceived, immature response to a post that I've seen today.

On a side note, is "Speirs" pronounced "spears" or "spires?" I spent too much time in Germany, so I want to ensure that I'm reading it correctly.

I'm more afraid of Corporate thugs...they have a ton of money and couldn't care less about the guy on the street. They control entire industries and Gov agencies.

Could someone show me a definition that says thug means black?

It did come from India.

Show us where today's definition fits the original meaning.

Show me where it means the n word.


How many buildings got torched?
How many cops got injured?
I don't know since it was not on the news....

Why is it ill conceived?

You don't think some people get a buzz using the word thug when describing victims of police brutality?
I do, hey ho.


Anyways, it's Speirs, pronounced the same as Britney's name only Scottish and probably missing a Mc at the beginning.

Show me where it means the n word.

Never knew it did.

Did I say that?

My memory is terrible I must admit.

originally posted by: thesaneone
a reply to: Greathouse

Made the news out in Arizona so not too sure what your talking about.

Everyone of those thugs should be in jail as well.

I would fully support the use of tear gas, batons,and if necessary bullets, on these idiots also.

No free passes for white idiots either.

That's what's so great about it! Black people is not the official definition, but everyone already knows what you're talking about when you say the word thug. When was the last time a racist used the word thug to describe a white person?

I know! Those thugs I have never met and know nothing about are irredeemable villains. Why can't the world just except my conservative judgment and be done with it?

originally posted by: abe froman
a reply to: Greathouse

Everyone of those thugs should be in jail as well.

I would fully support the use of tear gas, batons,and if necessary bullets, on these idiots as.

No free passes for white idiots either. 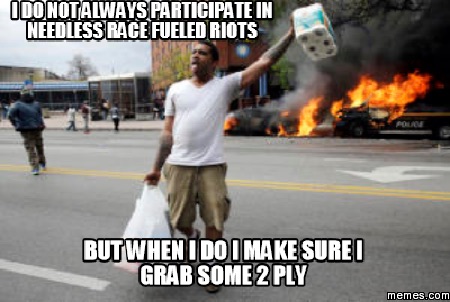 It's been used a lot because there has been an uptick in thug activity. Call them what they are. Whether they are cops or street people. A thug is a thug.

posted on Apr, 30 2015 @ 02:13 PM
link
Its easier to hate on someone if there considered bad people, its the new buzzword so people dont get in trouble.

thug
THəɡ/
noun
1.
a violent person, especially a criminal.
edit on 30-4-2015 by raedar because: added true definition of thug

That has to be it. The people advocating rights for minorities must be racist because they don't want me using derogatory terms for minorities while disguising it as politically correct speech. Logic!

Thug describes a criminal, how hard is that to comprehend? Criminals destroy property and there were many criminals out during the riots.
edit on 30-4-2015 by raedar because: misunderstood

You said nothing about some people, nor about the term being used against victims of police brutality. You implied--well, stated--that people who use the word blah blah blah.

That's ill-conceived, as it generalizes everyone who uses the word and the people the word is used against.

It's like someone else said, if the shoe fits...

They're included in the definition, the same as anyone