It appears that Dr. Norton, a NSA and NASA consultant has blown the lid off the greatest conspiracy and biggest question of our times. Are we alone in the universe. Apparently - NOT. In fact, supposedly, things such as this can be found lurking on the darkside of the moon. 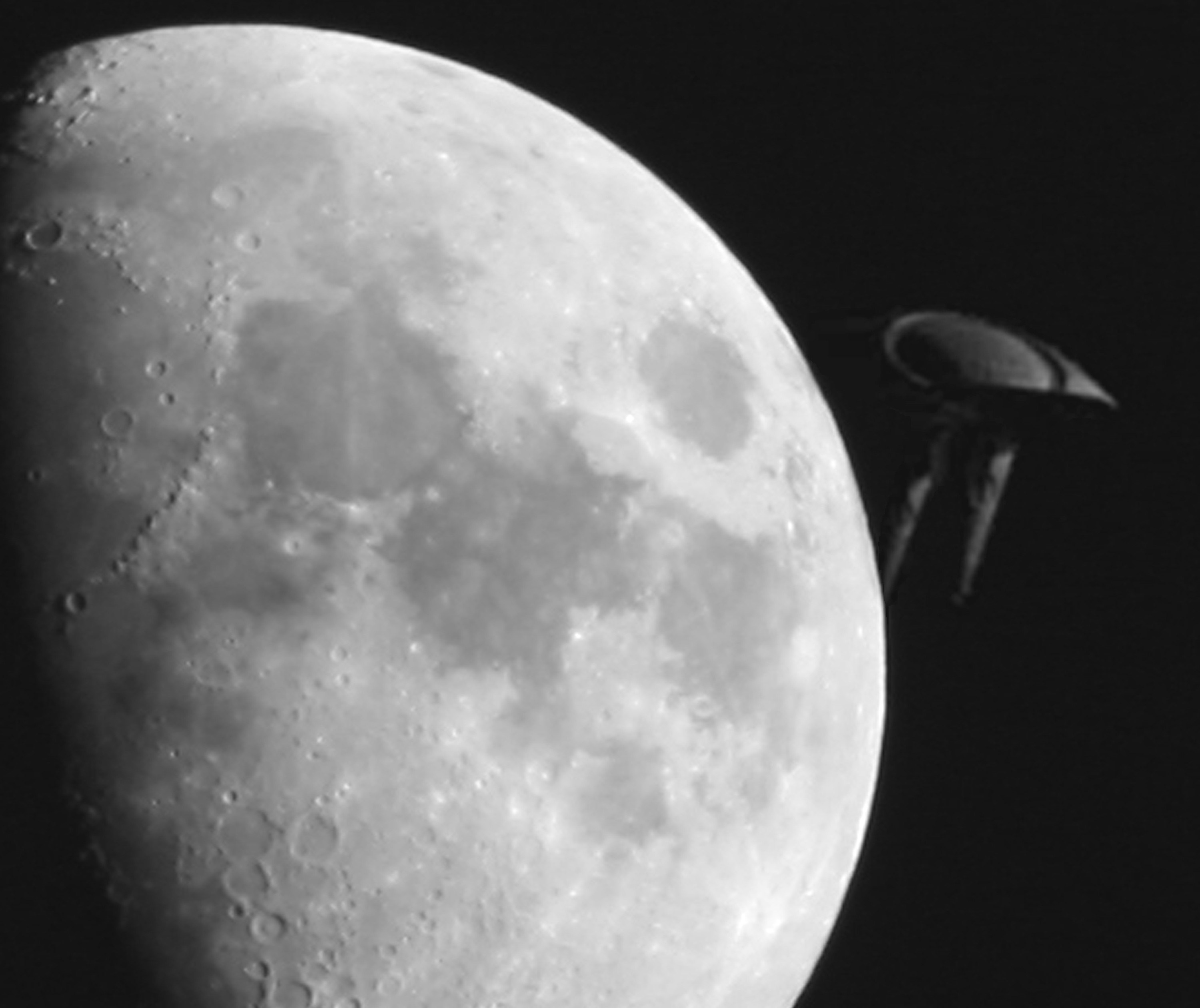 On January 22, 2012, Dr. Norton was called to the MacDonald Observatory in Texas and saw “massive, three dimensional black structures in space, in straight line formation advancing in the direction of planet Earth. The object seemed to be emitting some sort of force field that deflected space particles from touching their surface, almost like the magnetic field around the earth. The objects were getting so close that, with our telescopes, we could see the structural features of these things in high detail. They were shaped as a three dimensional “L” shaped craft. By January 2013, the objects had been tracked to about 200,000 miles past the planet Mars. Once they reached this point, almost instantaneously, the object vanished from our telescope lenses as if they had activated some sort of invisibility shield at the flick of the switch. I knew that the upper echelons of government were worried about these things because I was under a constant 24/7 guard by Secret Service agents. For nearly the entire year of 2013, we watched the skies in disbelief. We didn’t know what was going on or where these things were. According to my calculations, these things would have been so close to us by now that we would have no problem seeing them in the night sky had they stayed visible to us. We didn’t know if they were still coming or had left the solar system.”

Now this isn't the first time this particular whistleblower has graced the pages of ATS in discussion. Here are a few links, I searched out for further reading.

Now I ponder on what this means. Is this whistleblower - blowing hot air or is their some meat and potatoes in his story?

The final thoughts to the source above have some interesting hypothesis, such as...

If the extraterrestrials are changing the magnetic waves in the gravitational field of this planet, it could have implications on what that might do to our brains and more specifically, what we are capable of doing. For example, a slight change in the magnetic field may affect the Schumann Resonance where the frequencies are more derived from pure love or as some may call it, “Christ Consciousness”. It may also open up our minds to their fullest collective capacity where we all have instantaneous abilities, such as telekinesis, ESP and other psychic or metaphysical abilities. The Earth is currently undergoing a magnetic pole shift, which has not occurred in at least 700,000 years on this planet, so perhaps this visitation has something to do with that? Many people believe that the moon is a large satellite, so the possibility remains that those who placed it here have returned. While much of this is speculation, no one truly knows who they are or why they are on the moon. Only time will tell!

Only time will tell indeed! I've always been under the fanciful thought - that it was mighty strange we never went back to the moon. Not to set up a moon base, or do more research hands on, that we bomb the moon for "water" *eye roll* I've always had this feeling that when the astronauts went to the moon - they learned we aren't the only ones in our own Solar system - let alone the galaxy.

It is this writers opinion that our society is ready to acknowledge the existence of other forms of life other than what is already on our planet.

i'm not so sure about that. Some are ready....but overwhelming majority isn't.

As for this whistleblower...never heard of him. Spare me character assassination that will surely come and tell me right away that he is mad, lonely and sad.

I've not come across this 'Dr Norton' before.

I have always thought there is something on the dark side of the moon, call it a gut feeling,

posted on Apr, 4 2015 @ 04:18 PM
link
If I get on my knees and bow while chanting "Aliens Akbar", will that be enough to keep them from blasting me with invisible rays coming from their invisible ships?

I don't even know if my tinfoil hat protects me from invisible ships.
edit on 4-4-2015 by Arbitrageur because: clarification

posted on Apr, 4 2015 @ 04:18 PM
link
For those readers who may not be aware of this, there is no "Dark side of the moon" (except for Pink Floyd fans). What humans call the dark side is the side we never see from Earth, but it gets as much sun as the "real side".

posted on Apr, 4 2015 @ 04:19 PM
link
a reply to: CirqueDeTruth
that's just some image for effect right?
because that's definitely the mother ship from independence day

so...apparently...Dr. Eric Norton is not a real name of this...whistleblower.

originally posted by: lostbook
Mighty peculiar that we haven't gone back to the Moon isn't it?

What you mean 'we,' kemosabe?

posted on Apr, 4 2015 @ 04:25 PM
link
Didn't India send craft around the moon a few years ago? Wonder if they would collaborate any of this.


I don't even know if my tinfoil hat protects me from invisible ships.

I got a guy that does upgraded tin foil hats that will protect ya.

originally posted by: EyesOpenMouthShut
a reply to: CirqueDeTruth
that's just some image for effect right?
because that's definitely the mother ship from independence day

I snagged the image used in the source article from the story. I'm thinking it's a still shot from a movie - and now that you mention Independence Day - it clicks.

You decide , I know what I think

Ohh, I didn't think about checking youtube for interviews with this man.

Thanks for adding that Gortex.

These things were thousands times harder then the hardest materials on earth...
Sounds legit!

originally posted by: Arbitrageur
If I get on my knees and bow while chanting "Aliens Akbar", will that be enough to keep them from blasting me with invisible rays coming from their invisible ships?

I don't even know if my tinfoil hat protects me from invisible ships.

That won't help. They are looking for sex slaves.

The craft on the Moon image is just a crater with the dots likely caused by image artifacting , here's another image of the crater from Google Earth. 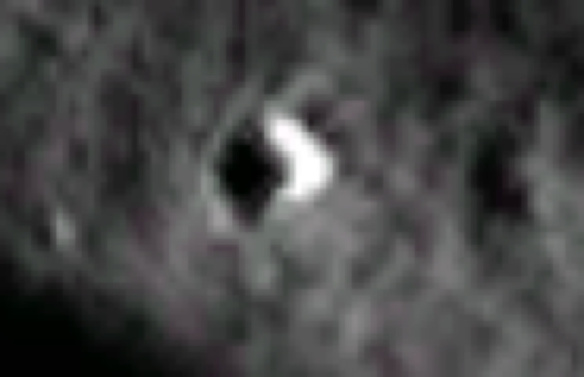 The other problem is as far as I'm aware Dr. Eric Norton is a alias , we don't know who he is so anything he says must be taken with a large pinch of salt , given the claims he makes I would suggest a bucket load of sodium chloride.

posted on Apr, 4 2015 @ 05:20 PM
link
That 'flying V' (not an L shape) seen on Google Moon is an artifact of image sharpening and it's only seen when zooming in to the sharper imagery, there is no fade in or out..that should tell people something when they view it, it's there or is not there, all according to what point you are in zoom. There are similar 'pixel' affects all around the same area, all appear in the same way, which incidentally is in the 'peeled' area that you see on Google Moon when it opens, and it's been there a long time, and there are some picture credits given. So whatever the Norton story, that 'ship in the crater' is not connected to it, and as Gortex's video shows, someone is trying to make a connection, whether it is this same guy Norton or someone else taking advantage. Something to bear in mind.