Images of Adam and Eve discovered in Paradise.

page: 1
73
<<   2  3  4 >>
log in
join
share:
Kantzveldt
+41 more
posted on Jan, 30 2015 @ 08:06 AM
link
More properly the consideration of Indus valley type seals found in Bahrain, the Sumerian equivalent of Paradise, showing representation of a new idealized couple, not likely to have been considered as the first people but rather the first couple of a particular nature.

I love the basic symbolism of those, man and woman and a third factor, the fish sign, to produce not unsurprisingly 'fish people' whose cult was celebrated at the Great Bath as i outlined here.

The consideration that this does relate to the breeding of a new pair is of course strongly reinforced by association with the mating bull, and given the Celestial association of that with Taurus this was cosmic breeding.

There is also seen in conjunction with seals of this type a seed like pod, again containing three seeds mainting the essential numerology of what was involved.

There is complexity within the tradition because as i outlined in The Place of Origin the fish symbol is indicative of Piscis Austrinus of the constellation Fomalhaut and yet in Indus Valley civilization that Fish is often seen in close connection to the bull, generally placed above it. This suggests that whilst the Fish was understood as a factor in this great Celestial breeding programme that was more directly related to the Pleiades, above Taurus.

This is reinforced by the fact that the early Goddess of sexuality and reproduction, Inanna, directly related to the Pleiades and there seems to have been an Indus valley equivalent, who along with seven male and seven female helpers seen right.

These of course are relating to the numerology of the Pleiades having arrived in a Celestial barque from there, using Taurus as a suitable means of transport, if you look closely at the seal impression of a boat you can see the seven male and female helpers on the great central panolpy; 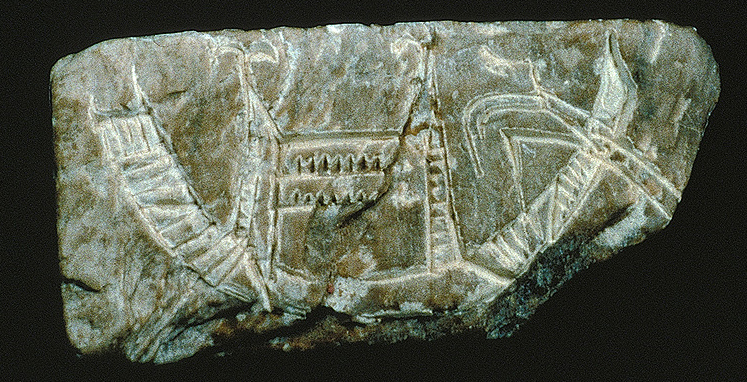 The seal is sketchy evidence but it does correlate to what i outlined here in Arriving from the Pleiades with regards to the seven male and female crew members under the leadership of the Goddess sat upon the spiked throne, and the magnificent model discovered representing this. 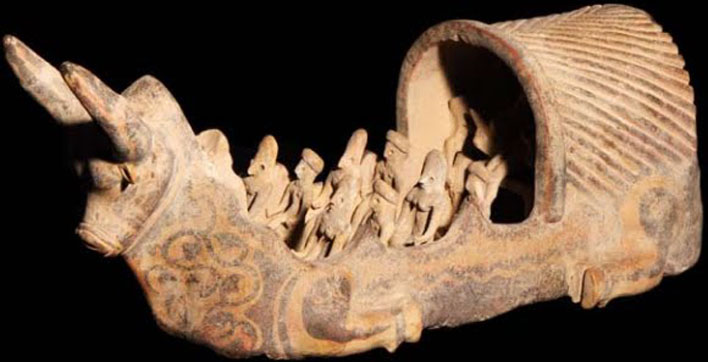 There is then a depth and complexity to the symbolism, the overall instigation of any Celestial breeding programme is under the authority of the Great Bull, an early archetype for the primary Deity Anu, and Inanna as the Pleiades is his glamouress assistant in conjunction with her crew, the association of these Deities with sexuality and reproduction was established in the E-anna centre of Uruk, even though they were generally happy enough simply breeding sheep and cows there.

One also sees that the crossing of space correlated to the crossing of water, and emergence from such in terms of the Fish Apkallu and the Abzu, this general command of the element of water and indirectly space was under the authority of Enki and so the Fish people were understood as under his general control, and the great Celestial axis symbol which spanned the Heavens which i outlined in Mysteries of Dilmun because it was represented by a tree also relates to the capillary action of water and it's seeming capacity to defy gravity in feeding water upward throughout the system, so the tree of Life was the celestial conduit.

After reading the title I came here getting reading to gripe but this thread is excellent and well put together mate. Great pics as well.

Yes a case of strange but true, everything indicates that around 5,200 years ago there was celebration of a new type of couple that had inter-bred with cosmic 'fish-people', that their descendants were the scholar class of Sumeria, so it was not just eating fish that could make you brainy... 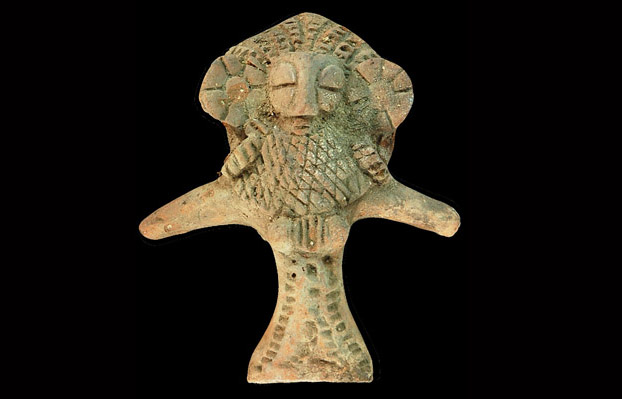 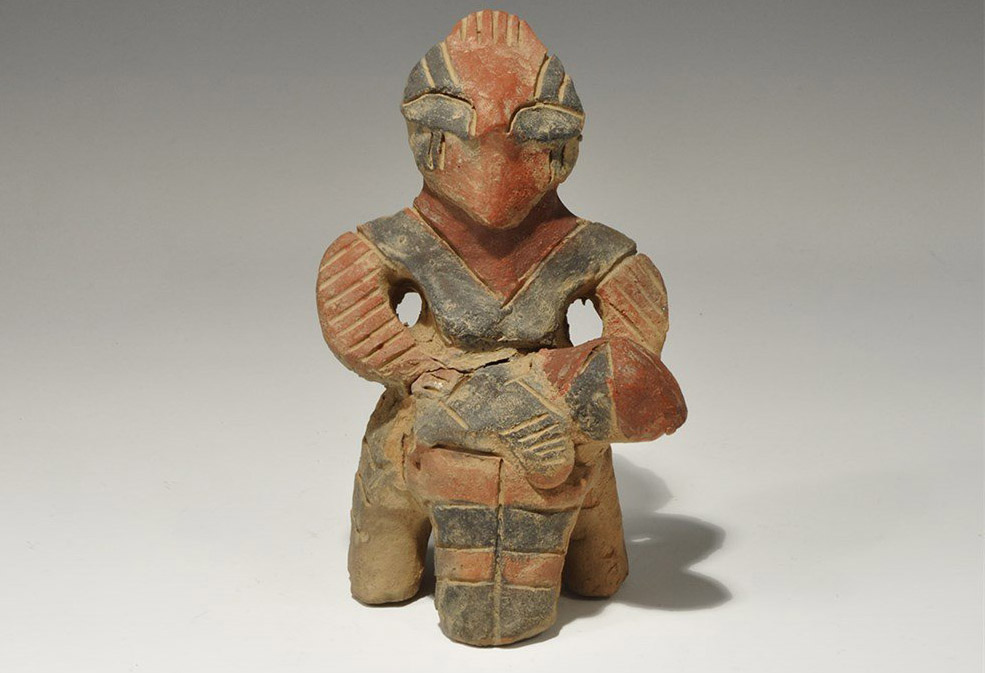 There are tales of African nomads and I believe Sumerians, of Fish People arriving in the area and teaching man. I lost all of my bookmarks on it but there is one tale that stuck with me because more than one culture had a tale of aquatic type people entering the area.

Not to mention that the survivors where killed off by the tribes in the area because they had a strange smell and where quite frankly, alien. One survivor managed to get befriended.
edit on 30-1-2015 by cenpuppie because: (no reason given)

posted on Jan, 30 2015 @ 09:46 AM
link
What does Christian theology, have to do with sex-cults? Basically, your saying that it is Adam and Eve, because you say so? Where is the connection? I can almost understand the seed-pod, as the First Couple had 3 sons to start. But other than that, it seems like your reaching, and wanting it to mean what it does not.

Right I think its his theory but I wouldn't take it as it has to be Adam an Eve...could be whoever the first couple was...which to some...is Adam and Eve...to others like me..I have no clue. But its certainly not an awful theory and the pics and thread is fine on its own. Who knows what they really meant by all this...so I understand what you are saying.

There would be a very strong case for suggesting that couple formed the basis for Adam and Eve, in that Dilmun (Bahrain) was understood as the Mesopotamian Paradise, that the Tree of Life finds early and well developed iconography sourced from Dilmun, and that in the context of the cult of Enki and Ninhursag that created all organic life in Mesopotamian tradition, so add to that a first couple and seemingly it would be problem solved.

The qualifier i added myself in that i don't think they represent the first couple in terms of overall humanity but rather a section that inter-bred with the Fish people/Apkallu, whose tradition was also strongly related to the Persian gulf.

The connection is that a primordial couple depicted on a seal with 3 seeds in a pod and animals and such, were found in Paradise [Eden] that is, the Sumerians' idea of Eden, in Bahrain. As the Bible is mostly taken from Mesopotamian mythology and culture, this could be Eden's origins!

posted on Jan, 30 2015 @ 11:18 AM
link
a reply to: Kantzveldt
That seal on the right... are those cloven-hoofed, pointy tailed, horned devils...? Might that be where the "Pan" archetype originates?

Yes a case of strange but true, everything indicates that around 5,200 years ago there was celebration of a new type of couple that had inter-bred with cosmic 'fish-people', that their descendants were the scholar class of Sumeria, so it was not just eating fish that could make you brainy...

Sleeping with the fishes means something different where I live. Lol.

I would think in comparison to other seals of that subject it would be Enki and Ninhursag in bovine form as the great progenitors of all living things, establishing the Tree of Life standard, the attendants are possibly the Apkallu that often in Dilmun more resemble turtles rather than fish, similar here. 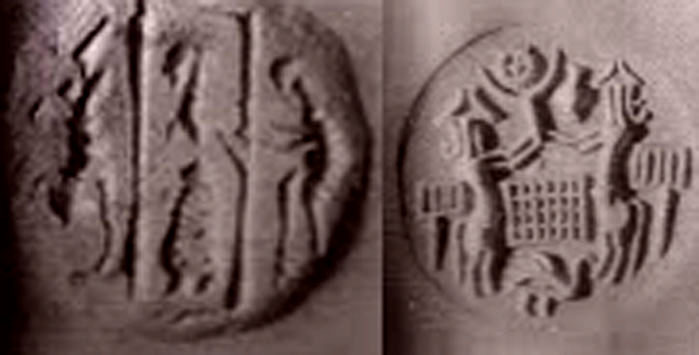 There is that EA006...
edit on Kam13129vAmerica/ChicagoFriday3031 by Kantzveldt because: (no reason given)

When do you place this 'first couple' event as taking place?

Hi, i always consider the best evidence to date to around 7,500 years ago and Vinca culture which was the most advanced of it's day, as i suggested here

A clay figurine tradition and what was involved with the production of such expanded across the entire Near East and into the Indus valley which sources back to Vinca, so by the time of the early Dilmun period the traditions even then would have been around a couple of thousand years old, and they soon lost relevance into the historic period as people found it difficult to relate too and believe in, though the claims of descent were maintained by the scholar class.

posted on Jan, 30 2015 @ 07:54 PM
link
I think the yak is something still seen today in the indus valley and himalayam region...
The indus river that runs through the indus valley goes all the way up through the Himalayas into Ladak and beyond...
It would have connected the ancient city of harrapa which is where these artifacts orginate, with a whole network of different indigenous nomadic tribes and travellers from remote kingdoms of china, Tibet Mongolia afghanistan, Iran, and even russia.

Many nomadic people of the himalayas live much the same way today as they did thousands of years ago.
My interpretion of some of these stories and artifafts is that high up in the himalayas, many nomadic people became spiritually enlightened after finding themselves in the celestial surroundings of the high himalayan mountains, and would have appeared to outsiders as having "come down from the stars". That would not be an invalid observation! But the interpretation, of them having come from an extraterrestial planet with a technologically more advanced humanoid civilisation, I think is an invalid interpretation of what those people who described such encounters were actually witnessing / experiencing.
edit on 30 1 15 by funkadeliaaaa because: (no reason given)
edit on 30 1 15 by funkadeliaaaa because: (no reason given)

posted on Jan, 30 2015 @ 09:01 PM
link
What is the significance of the stubby hands, or really stubs without hands on the clay figurines.
This references the post on your other thread you linked in on the Dogu and Vinka sculptures.

originally posted by: Chronogoblin
What does Christian theology, have to do with sex-cults? Basically, your saying that it is Adam and Eve, because you say so? Where is the connection? I can almost understand the seed-pod, as the First Couple had 3 sons to start. But other than that, it seems like your reaching, and wanting it to mean what it does not.

Great thread, for those capable of understanding. S&F. I actually showed up expecting to be angry, too. You're very sneaky with that title. ha.

There are tales of African nomads and I believe Sumerians, of Fish People arriving in the area and teaching man. I lost all of my bookmarks on it but there is one tale that stuck with me because more than one culture had a tale of aquatic type people entering the area.

Not to mention that the survivors where killed off by the tribes in the area because they had a strange smell and where quite frankly, alien. One survivor managed to get befriended.


Perhaps you are referring to the Dogon Ethnic group in Mali, if so they are not nomads but farmers,but they did believe that the Nommo were aquatic beings from the twin system of Sirius perhaps their home star, they were fish people capable of walking on land and they impart the knowledge of Sirius and more important Sirius B which was unknown till the middle of the 20th century with the use of modern telescope, they also plotted it's course up till the year 2000, I can't think of a connection with the Sumerians but one Indian scholar seemed think there is, most others believed they maybe some connection with the Nile valley folks, certainly they share the same symbol as Saharans 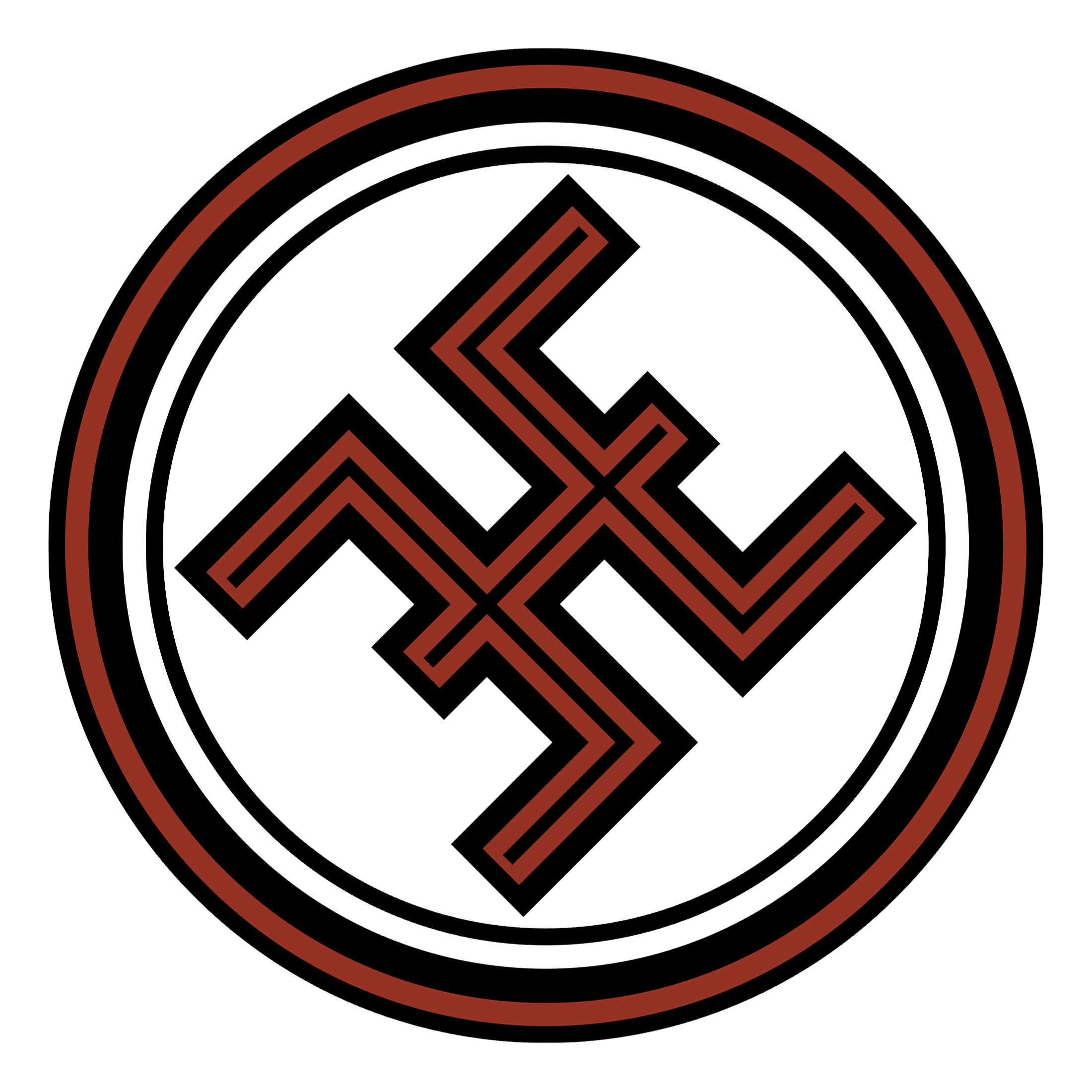 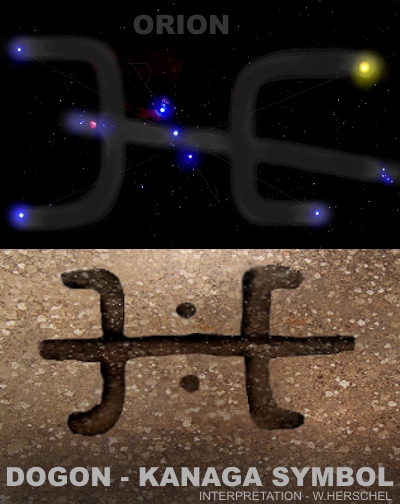 Dogon symbol they originated in the Sahara before migrating to the Savannah and were pushed to being cliff dwellers by Mandinka expansionist
I read somewhere that Berbers share deep clides with them.
edit on 31-1-2015 by Spider879 because: (no reason given)