What happened to Bob Garrett? After stumbling across an abandoned campsite that looked more like a violent crime scene last year, Garrett went public with the evidence along with his own experiences with Bigfoot. He's now disappeared from public view and taken all his evidence with him, allegedly silenced by government officials. There's not much more information than that but it's more than enough to set off alarm bells across the Bigfoot research network. Take a listen to his interview here as he discusses the "torn-up camp" he found where he says he was charged by something huge, hairy and humanoid that seemed very agitated that Garrett and his companions disturbed the campsite. His encounter is detailed and entirely terrifying, and Garrett is convinced he would not have survived had he not have spooked the creature off with a laser light. Where were the campers and what destroyed their camp with such fury? Did they unknowingly trespass into an alpha male's territory? Why are "government officials" so intent stopping Bob Garrett from passing along his experience?

What the hell is going on out there? Is the government targeting Bigfooters? Researcher Bob Garrett had it all -- a great Bigfoot encounter, a great radio show, and and awesome YouTube account -- but that has all disappeared. Rumor has it that Bob has also disappeared from social media due to some sort of government harassment. The story is still developing, but social media is buzzing and a lot of people are still trying to figure out the real story.

As it mentions there's a pretty freaky podcast interview found at the link above as well as some other potential Gigantopithecus reports mentioned in the comments section -a friend on another board also sourced this great article about the U.S. Government which is well worth a read and contains some pretty eye-opening accounts from police officers and military. 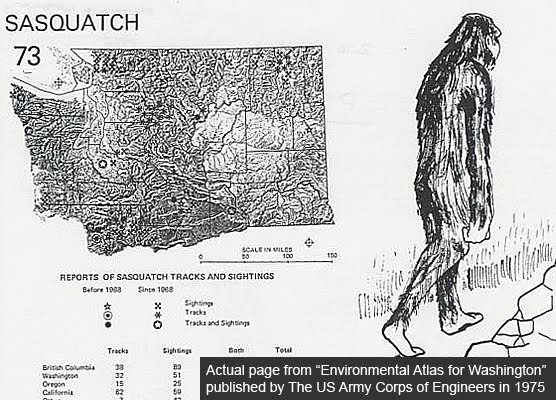 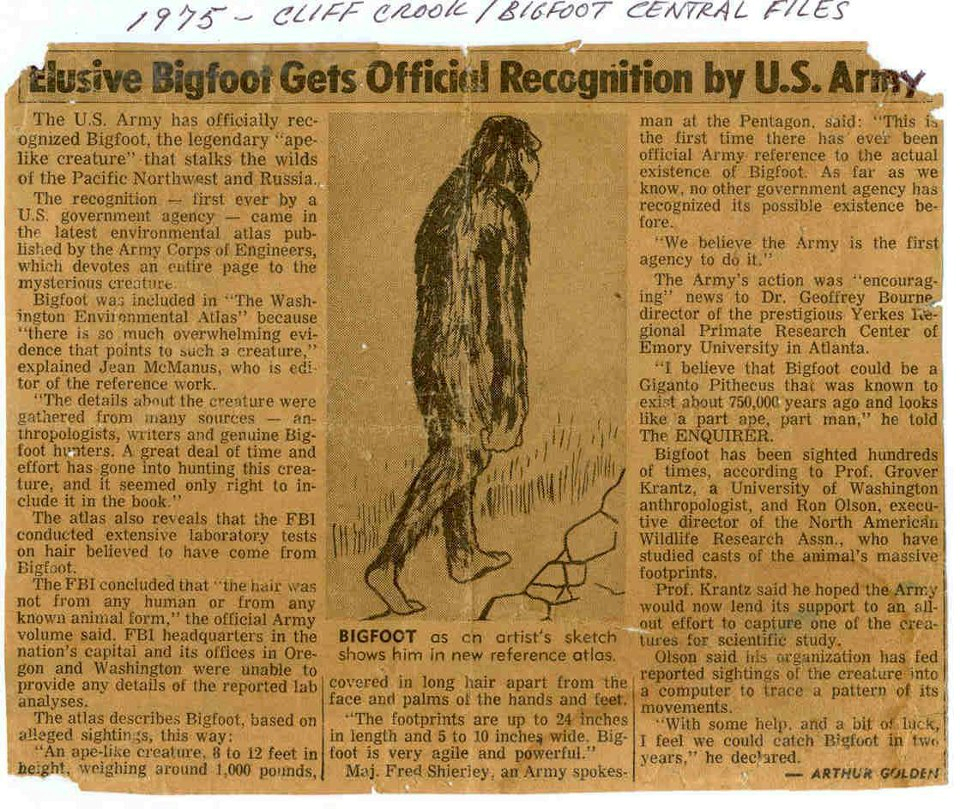 Bigfoot confirmed by the Government?

Thanks for that Charles - some fascinating insight there.

You never know-he might be the only one to have gotten some real footage of "bigfoot."

If "bigfoot" were actually inter dimensional beings (as I have read on ATS and other places before as a possibility)-then I could see how the gov would step in.

Because anything that is capable of stepping in/out of dimensions would immediately be declared classified or covered up instantly.

Everyone that saw the footage would probably never be heard from again.

posted on Jan, 17 2015 @ 12:57 AM
link
This would be very telling if found to be true. What reason would the government have in covering something like this up? I'm not sure of what the answer is. I don't think there would be widespread fear or panic if solid evidence of Bigfoot was found... Unless of course Bigfoot is more than an ape man. Interdimensional? Alien?

I can't see any other reason to try and cover it up.

Thanks for sharing this. I am one who is on the edge concerning Bigfoot and whether he exists or not. I would like for someone to find some rock solid evidence one day either for or against.

Likewise, I would love to have 100% proof that this man's allegations are true. If they did indeed shut him up, he would almost have to be on to something that would rock us back on our heels.

eManym
+11 more
posted on Jan, 17 2015 @ 12:59 AM
link
Think about it this way, what does he have to gain by removing himself from the social limelight? Does it make his story more credible?

We're talking about him (and not his story) now, aren't we..?

posted on Jan, 17 2015 @ 02:11 AM
link
How exactly does one reach the conclusion that he was shut down by the government? it's all rumor and speculation and nothing substantial or tangible at all.

originally posted by: Kangaruex4Ewe
What reason would the government have in covering something like this up?

The most logical explanation I've heard is monetary reasons. If sasquatches were revealed to the public, many national and state parks would have to be shut down at least temporarily while we figured out what to do about them, causing losses of billions of dollars for the government. We all know money motivates people to hide things.
Another reason is potential lawsuits against the government due to their knowledge of these creatures probably being responsible for many deaths and disappearances. Alot of people would be very pissed if they suddenly find out that the government knows what happened to their relatives and loved ones who either disappeared or died while in a wilderness area, and the government covered up the cause for the sake of continuing to rake in money.
A third, less likely reason, is religion. There could be significant ramifications to causing mass amounts of people to question the validity of their religious beliefs in terms of evolution and the existence of other, intelligent nonhuman hominids.

originally posted by: peter vlar
How exactly does one reach the conclusion that he was shut down by the government? it's all rumor and speculation and nothing substantial or tangible at all.

If you look into bigfoot research for long enough, you'll run across an occasional story of the government trying to "dissuade" people from talking about their encounters or firsthand knowledge of these creatures. The idea of the government doing such a thing as shutting down a researcher is not at all unheard of; so when a prominent researcher does suddenly disappear, with all of his research and evidence, one possible logical conclusion you may come to is that the government was involved.

It appears the US Army has agreed the creatures exist...in 1975.

Even more of a conspiracy, what if they have actively been "Hunting" these poor creatures, and have them or some of them stashed away in some Dumbs, experimenting on them.....no wonder they are p***** and wont nothing to do with humans.

It seems logical that "Bigfoot" is not some hairy ape, but can communicate just like humans when the need arises.
Note that when all humans are spooked, they usually let out cries and yelps and screams.....just like a Bigfoot would if spooked or hurt. Other than a few expletives that may squark out amidst the screams.

I do believe they are out there......I do believe they are some sort of Homo Erectus/Neanderthal/Cro Magon type of Homo.....who are much smarter than we give credit for......no I dont think they are ET or supernatural beings......just well camoed and atuned to their environment......Like we use to be.

What I do think sad, is if they are preyed upon by the US govt, and Once again, being harassed by modern man, as modern man seems to do.

Yes, they do speak, even with actual language. You might be interested in checking out this link here. If you do a youtube search for something like "Scott Nelson bigfoot language" you can probably find some good speech examples.

Me too. I have also perused the Atlas after watching, an episode on animal planet all about these elusive creatures.
So many questions lay unanswered. Are they an offshoot of us? Primate or man??
Or something I've often wondered... In The Bible if one reads about Jacob and Esau, Esau was a wild man, hunter, with red hair and Very hairy, His brother pretended to be him, by putting goat hair behind his neck and on his arms ,as His father was blind he felt him to see if he was indeed his beloved son....to receive his blessing. I have always been intrigued by this story.......
edit on 17-1-2015 by Insidedaheart because: always editing over typing errors...

Be interesting to see where this goes.

There's a death defying leap of logic: someone stopped blogging so the government must have "silenced" him. Maybe he's on a protracted Bigfoot hunting expedition. Maybe he fell off a cliff chasing a Bigfoot at night. Maybe he got married and his wife doesn't approve of his hobby. Maybe he figures if he goes quiet for a while rumors about him will create more publicity for when he returns with his latest wild story. Who knows?

posted on Jan, 17 2015 @ 09:50 AM
link
I have had a personal experience while hunting years ago and since then im a believer and no matter what the debunkers say they will never change my mind on Big Foots. I personally think there dangerous to human and if this guy found a camp site where an attack occurred I would not doubt it. I can see the government cover something like that up to keep the public from panicing and getting guns and going in the wood to find them and in there fear shooting other humans with the same mind set.

posted on Jan, 17 2015 @ 10:00 AM
link
Bigfoot and other cryptids are just the tip of the iceberg. High Strangness/bigfoot events many times seem to include ufo, cults, mind control, time portals, MIBs and all the other stuff we come to ATS to investigate.

The phenom is not isolated and is much more inclusive of other weird BS than we can even imagine.
edit on 17-1-2015 by olaru12 because: (no reason given)

I have the original Argosy magazine that created the stir over the Patterson movie. And have my own minor story about Sasquatch. Briefly touched on in the preceding posts is an ET connection of the creatures to UFOs. Seemingly genuine sightings of the creatures in relationship to UFOs on the ground were not uncommon thirty years ago. Therefore, there is some, if tenuous, grounds for a connection to the two phenomena. Given that possibility, it then follows that the government will be highly interested in the Sasquatch beings. Actually, they should be highly interested in them anyhow. To draw this possible hidden connection out even further, the apparent lack of interest by government or some major entity such as a major university's interest in the topic is evidence in itself--knowing what we know about the ignoring of the UFO topic--that there is a conspiracy around this whole affair.

I would dare deniers of the Sasquatch to prepare themselves for a change of mind by doing active research over the decades of Big Foot encounters before they start cementing their stance of "totally impossible" with their off the top of the head opinions.

A through account from decades ago about the death of "Snippy" the horse in Florida apparently from the
vengeful Big Foot (Skunk Ape) creature would be a good place to start researching.

posted on Jan, 17 2015 @ 10:25 AM
link
Another thing that i always thought of is the government has admitted they exist they tell there soldiers when training in the woods do not shoot them do not chase them do not try to approach them notify a game warden or forest ranger or your commanding officer.