The Definitive Difference Between "Freedom of Speech" and "Bullying" Defined 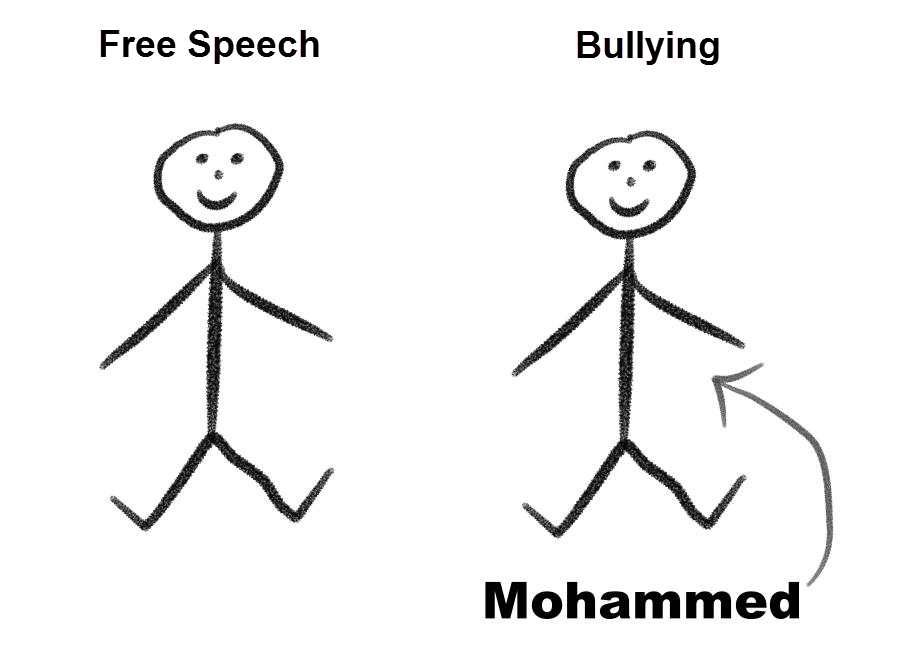 C'mon everybody. Is this really that difficult to figure out?

Seriously, if this truly offends you, can you please clearly explain why? What you must believe in order find yourself offended at this?

& as one of the only resident Muslims on ATS I think that is sufficient.


I fail to see how that's the definitive difference.

I suppose you think people who are bullied should just get on with it and not feel the way they do?

I've heard you refer to survival of the fittest before...

edit on 8-1-2015 by CharlieSpeirs because: Unnecessary!

originally posted by: CharlieSpeirs
Doesn't offend me in the slightest...

& as one of the only resident Muslims on ATS I think that is sufficient.


I fail to see how that's the definitive difference.

I suppose you think people who are bullied should just get on with it and not feel the way they do?

I've heard you refer to survival of the fittest before...


It's not cute, it's not intelligent either.


It's a lot easier for them to solve the problem when they can laugh and have fun with the other kids who are "bullying" them verbally.

It's easy. They are not required to become upset. Once they see getting upset is just one option, they have fun with it.

One girl used to get called ugly by some other girl. She went in the next day and started by telling the "bully" she liked her shoes. The bully was taken aback, and said, "Well.... you're still ugly." The girl laughed and said, "Yeah I know, that's why my parents took all the mirrors out of our house."

They ended up being friends.

I'm truly glad that you are not offended. My intent is not to offend. It's to help show people that they don't have to be offended and feel bad over other people's words. They don't have to give up their power to others. That's all.
edit on 8-1-2015 by Jamie1 because: (no reason given)

Bullying: Offended Muslim extremists attack those who had written and published the above. Murdered them.

Now people are terrified to say anything that could offend the bullies.

People need to just say they don't get it and keep it moving.

Muslims offended by portrayals of mohammed who go kill others are really, really stupid and deserve anything that comes to them.

Are you sympathizing with the people that are offended by the depiction of the prophet or did you intend something else?

To me this cartoon is saying it's fine to depict everyone except Mohammed because that's bullying
Is it intended to be taken literally or sarcastically?

You sound like a level headed man. Why doesn't the Muslim community try to stop the zealots who twist your religion? I know, you're right here with the rest of us trying to make an impact. We all want the same thing except the perversion isn't helping. I do understand there are zealots in all religions but only one calling out for the head of the unbeliever. I would love some insight as to why. At first I thought it was because of policy and oppression but now I'm not so sure. The same Muslims that are living here like I am are the same way. The one's who are not, let them do what they do without calling foul.

If I read a book and it said to kill unbelievers, I would have thought I was reading the book of the dead. That's probably why I despise religion so much. That being said, if you express on ill will towards me, I will respect your religion. On a personal level I already respect you as a person because you seem level headed. I usually judge a person by their actions and I know everyone is capable of being wrong at times also. I'm just trying to get into the mindset the zealots to see what needs to be done to halt that thinking. It's a learning process for us all. If death is all that comes of it, I'll have no choice but to meet that with ample force. I mean, it's just to defend yourself, right?

I don't think the crusades were right either. Just so you can get into my mindset a little.

If your response is instead "AHAHAHA NO I WILL KEEP DOING IT BECAUSE SCREW YOU YOU WORTHLESS SUBHUMAN SCUMBAG!" then you have failed at successful, civil communication.

Now, in most nations there aren't laws against being such an enormous douchebag - and I think that's a good thing. But it doesn't change the fact that douchey behavior is douchey behavior.

And, this is just me, but i would, just once, love to see people on the internet rally around freedom of speech that actually has something important to say. Are we that bereft of ideas and thought today, that the highest mode of expression we can think of is some bullcrap about a weird Arabian Jewish guy from the 7th century?

originally posted by: ausername
Freedom of speech: The prophet of Islam had a six year old wife. He must have been a pedophile.

Bullying: Offended Muslim extremists attack those who had written and published the above. Murdered them.

Now people are terrified to say anything that could offend the bullies.


and certain news outlets immediately made Islam the victim

I wish I had the answer to that question pal.


I could argue we, Muslims, have people like Malala & many others who speak out about atrocities...

Then we have people like the Kurds, the Iraqi Army, Iranian Airforce, FSA, Pakistani Army & many others physically engaged in battle with the likes of IS, Al'Qaeda & the Taliban...


So on one hand, Muslims do all they can to fight the scourge that is extemism.

Some still feel that isn't enough, that something more drastic needs to occur...


& that's where I come up short looking for an answer!

I pray for that answer everyday...

But being bombarded with voices (mental health issue) kind of hinders my progress when awaiting the answers.

Excellent answer. It shows there's a real person behind it. That's what will win in the end.