Half of All Children Will Be Autistic by 2025, Warns Senior Research Scientist at MIT (title)

Glyphosate is present in unusually high quantities in the breast milk of American mothers, at anywhere from 760 to 1,600 times the allowable limits in European drinking water. Urine testing shows Americans have ten times the glyphosate accumulation as Europeans.

“In my view, the situation is almost beyond repair,” Dr. Seneff said after her presentation. “We need to do something drastic.”

Is that whats wrong with everybody?

posted on Dec, 27 2014 @ 06:53 PM
link
Oh hey look....now they're going after breast milk. Let's just forget women have been using since the dawn of time. In twenty years it will be illegal.


How many mothers were tested for this addition to breast milk?

From how many States?

Did they look into their dietary plans?

I shouldn't ask these questions because it leads to the assumption that I believe this bull# might be true.

This person has written 170 peer reviewed articles. You don't do that if you are off track.. MIT is one of the top schools. But you don't have to be super duper smart to know eating poison is BAD. You are eating things that KILL other organisms.

actually that's not the point.. We are all becoming less healthy..

I don't know if you have noticed but almost everybody I know is losing small parts of their communication abilities.

Anything that gets into an animals body say Humans or Cows will get into breast milk, say breastfeeding or Drinking MILK from the store..

It's getting hostile on this planet, if it wasn't already bad enough.


We can't spray poison on all our food..
We can't make our food make poison and then eat the same food that is now programmed to make itself poisonous.. (BT corn)

Where does water come from?? Does it runoff, from anywhere?? IS drinking water chemical runoff??

You know when you eat cocoa puffs and at the end you have chocolate milk? Our life is like that but we have poison water.. The poison is on the puffs. Which following analogy is the earth, the land.. The water comes from the land and grabs up the poison like making tea, and puts into the lakes or wherever water sits low due to gravity..

And if any and I mean ANY of you don't know the score... Check up on AUTISM.. Check up on the rates of babies born with it...
And after you do this.. THEN tell me why. I would love to know.

The number of kids with autism completely mirrors the level of toxins sprayed onto food. This could be a coincidence. I doubt it.. You'd have to give me another reason, and the exact same increase again.. 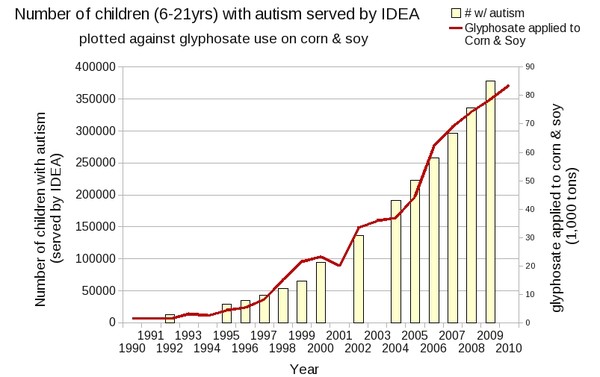 We went from near 0 to 400,000 kids with autism in 20 years.. That's an INSANE increase.. There IS a cause to anything that has increases like this. Things with such a massive increase are usually do to one concept. One reason. Things with multiple variables usually graph with peaks and valleys. The only way to get something with multiple variables to always increase is to have all the variables always increasing as well.

Well that is certainly an angle that never occurred to me ! (?) I took it more of a symptom of the foods we eat... Easier than collecting stools and blood samples I suppose.... plus babies usually are provided sustenance via the mothers milk not by the other two..

There will be someone come along soon a declare it all B.S. nothing to see here etc etc.. Yet the Autism rate continues to climb.. I certainly do not know what is causing the rate increase yet in 3rd world countries it is nothing compared to the rates in the USA..

Easier than collecting stools and blood samples I suppose.... plus babies usually are provided sustenance via the mothers milk not by the other two..


I like the way you said "usually"...
It allows for the off chance that some babies sustenance comes from blood or stools

Summary:
The autism epidemic is caused by:
– Glyphosate working synergistically with aluminum and
mercury and insufficient sun exposure to the skin and eyes
– Diet depleted in micronutrients: vitamins and minerals
• Glyphosate’s chelation of metals is a core component of
its toxicity
– Disrupted gut bacteria leads to brain pathology
– Aluminum, mercury and manganese can account for many
aspects of autism
– Pineal gland plays an important role in brain dysfunction
• Autism may be treatable through organic diet enriched in
sulfur and manganese, along with abundant sun exposure
edit on 27-12-2014 by Lysergic because: (no reason given)
edit on 27-12-2014 by Lysergic because: (no reason given)

Summary:
The autism epidemic is caused by:
– Glyphosate working synergistically with aluminum and
mercury and insufficient sun exposure to the skin and eyes
– Diet depleted in micronutrients: vitamins and minerals
• Glyphosate’s chelation of metals is a core component of
its toxicity
– Disrupted gut bacteria leads to brain pathology
– Aluminum, mercury and manganese can account for many
aspects of autism
– Pineal gland plays an important role in brain dysfunction
• Autism may be treatable through organic diet enriched in
sulfur and manganese, along with abundant sun exposure


That's why their wont be any war, because were dying the death "Of a thousand cuts" All the great Empires collapsed from within, who would have guessed we would poison ourselves.


If something is in breast milk it's just in you too.. Think about it.

Women don't have a special well they all drink from..

your joke is taking away from actual logic.

There are 2 versions of this. ONE the USA is controlled from Europe and those people are not getting poisoned like this. The other version is we are living in the fall of an empire and the empire is so insanely dumb it's poisoning itself.

I personally can't use logic to pick either of those, so it's all up to actual evidence of who is this dumb or who is doing this on purpose.. I don't know who it would be unless they have a death wish.

Who isn't eating and drinking from normal stock supplies? I personally think people think money is worth more than people.. I personally think dumb people are killing us without even knowing it. I could VERY easily be wrong about that. I have no inside knowledge or anything like that.
edit on 27-12-2014 by KnightLight because: (no reason given)

I think the causality is pretty obvious... and a better answer than inoculations by themselves.

Something is causing this syndrome... and the slew of chems we spew into the air and land has to have some cumulative effect... and the surge in cancer and autism supports this rather obvious idea.

It's chic to dump on Monsanto as the most evil corporation to form (so far) these days... for a variety of valid reasons... and I'm not going to add a "but" after that statement.

Luckily, some supplements can help mitigate environmental toxins to a certain extent ... but perhaps we should look to prevention rather than treatment?

posted on Dec, 27 2014 @ 08:10 PM
link
If glyphosate is in breast milk then it's in everyone. If truly the suspected culprit in the OP-surely some will be along to claim MIT is wrong, or the article, or even study is bunk-. If more than half of children born will be autistic what ever the cause or causes, then why is this not being addressed more-so? Thanks MIT, maybe others will follow and or more will come from them on this. This is a bigger problem then thought, but hey just ignore it as the percentages rise: Okay until your children have it right?
edit on 27-12-2014 by dreamingawake because: (no reason given)

posted on Dec, 27 2014 @ 08:12 PM
link
I work in a secondary School in the UK (England) and I can promise you and without sounding insulting that a large portion of the population has some sort of learning disability that's including the staff. I dont work in the classroom and kids have come up to me (kids that know me) and asked me to check their homework because they think they've been miss marked and something that was right was marked as wrong. I checked and they were right but the teacher gave them a cross, when I pointed this out to the teacher, who was an English teacher, she became offended I tried to say it in a very nice way didn't call her stupid I just said 'Sorry Miss but I think you've made a mistake and marked his work wrong' but I was given a warning by the head teacher.

Over the nine years I've been there I've seen teachers and Teaching Assistants become worse and worse and the funny thing is about ninety percent seem to be dyslexic and yet when I tried to go for the job I was told I wasn't the right fit which is probably their way of saying I'm only gonna end up pointing out the teachers failings. So I'm not at all surprised these are becoming more and more likely and I'm not shocked at all by the numbers.

So what is different in American mothers and mothers of other countries? The food - GMO, the chemicals in the farmers fields, the massive vaccines, the fluoride and chemicals in the water, all the fracking?

Gee, don't have a clue. /sarcasm


a synthetic compound that is a nonselective systemic herbicide, particularly effective against perennial weeds.


Glyphosate is an herbicide. It is applied to the leaves of plants to kill both broadleaf plants and grasses. The sodium salt form of glyphosate is used to regulate plant growth and ripen fruit.

glend
+9 more
posted on Dec, 27 2014 @ 08:31 PM
link
And now we know why Obama signed the Monsanto Protection Act. So no-body can sue momsanto for crippling their children with Autism. 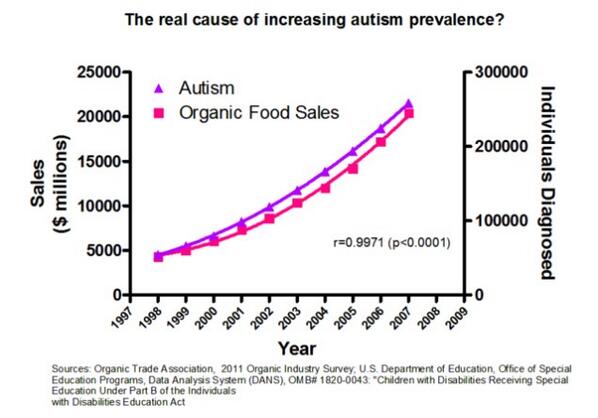 We must ban whole foods immediately just think of the children.

Just in case that was sarcasm.

posted on Dec, 27 2014 @ 08:38 PM
link
I wanted so much to add something meaningful to this but all I can come with is how utterly horrifying this prospect is.

People call me a nutter but THIS is why I'm maniacal about being as all natural and as chemical-free as possible for my kids....
edit on 12/27/2014 by kosmicjack because: (no reason given)

Being an aspie I and many like me look at the world and think it's messed up because everybody's normal. We express ourselves differently, comprehend and absorb information differently than normal people.

I think it's from what we're doing to the planet. Poisoning it and thus ourselves. I'm pretty certain it's existed before our current methods of farming, food production and chemical usage but I think we're destroying our children with all the stuff being pumped into our bodies.