Here's a picture from the article that has since been published in Ancient Origins: 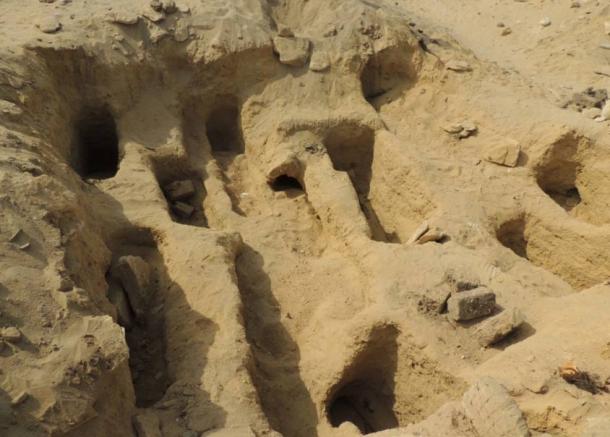 They're packed pretty tightly. Just eyeing it up I'd say it's about a dozen burials in an area approximately 400 ft² (20'x20'). One square mile is 27878400 ft² so that's about 69696 burials per square mile, meaning a cemetery with an average density of burials similar to that picture would need to be about 14.3 square miles to accommodate a million.

That would be massive. Arlington has about 400,000 graves in an area of 253 hectares which is just shy of a square mile.

Looks like the Fag el-Gamous is about 125 hectares or roughly half a square mile in area. From a 1988 paper on the BYU site:

The cemetery itself, covering approximately 300 acres (125 hectares), is almost entirely unplundered, though repeated digging for interment of bodies and later subsidence of the burial shafts have left the entire area in a very disturbed condition. A few very deep shafts, ranging from 15 to 23 m in depth, have horizontal shafts and burial chambers leading from the base of the vertical shafts, and these date probably from the Middle Kingdom. One unfinished burial chamber, beginning with a large room (c. 3x3 m) hewn from a limestone ridge running east-west in the cemetery continues north in a shaft for approximately 4–5 m before turning east in an unfinished burial chamber. Other rectangular shafts approximately one meter square and hewn into the small hills and mounds of the cemetery area angle downward and appear to turn horizontally left or right to burial chambers, but these have not yet been excavated, and firm dates cannot be assigned to them.

So we're looking at something like 13454890 ft² or 13.45489 ft² per grave which is not hard for me to believe. I'd imagine that the estimate given by Professor Muhlestein was basically made by dividing the total area by the area excavated and multiplying that by the number of graves found.
edit on 2014-12-16 by theantediluvian because: (no reason given)

originally posted by: grey580
a reply to: theantediluvian

I know that red hair and blonde hair have developed independently from each other in the past.

however it's interesting to see so many being found. and i imagine that there must be more graveyards out there.
with even more interesting things to find.


They dyed the booties, maybe they died their hair too.

dyed, no. The AE, male and female, were famous for shaving their heads and adorning them with wigs. Sometimes a different one each day depending on social rank and affordability. They were every bit as vain as we are today. hair, makeup, aroma therapy, the use of oils and fats on the skin. everything from ibex, lions, crocodiles, serpent, geese, and hippopotami to goat and even cat oil. Appearance and beauty were everything so they very well could have used different colored wigs but I'd have to double check that to be certain. the head was also shaved to assist in heat dissipation and avoidance of pests like lice so a wig or three was quite essential.

Maybe time is going backwards. I seem to see more shaved heads, nose rings, and jewelry piercings all over some people's body in the last twenty years than before.

Maybe we are traveling in loops.

According to the archaeologists many of the mummies date back to the times when Egypt was a Roman province, from the 1st century BC onward.

Scientists say a nearby village seems too small to produce all these large burial sites. A small pyramid is situated near the cemetery. But it was built more than 4,500 years ago, about 2 millennia before these million mummies were buried.

Was it a pilgrimage to the pyramid? Why did they all die? So much to explore here. Great post!

posted on Dec, 17 2014 @ 10:45 AM
link
An amazing find, although I'm not sure about the million bodies, we shall see though. The little booties they found just makes you think about how long ago they were put there. Probably their mother knitted them for a birthday or something.

It is kind of disrespectful digging up bodies from the past. Imagine in about two thousand years time someone started digging up today's dead.
As long as they are treated properly and with respect then it's fine with me.

I just wish things like this would come out quicker. It seems to take a life time to get to the MSM.

posted on Dec, 18 2014 @ 02:51 PM
link
Having read about this some time ago, I was surprised to find that nearly sixty percent were not native to the region, some still having blonde or red hair. That with the information that the burials were all done within a short period of time can only lead to the opinion that they were not all murdered, but not allowed to live equally with the native people, meaning that most were probably slaves. The fact that there were so many northern Europeans living in Egypt at the time might show evidence of a viable slave trade by the early Muslims to finance their continual warfare, as other evidence shows that Islamic traders reached as far as Sweden by the seventh or eighth century.

originally posted by: Astyanax
a reply to: grey580


Why? These people aren't ancient Egyptians.

Didn't you notice the dating? 0AD-700AD. That's the Roman Empire and the Dark Ages. Egypt was one of the crossroads of the world at the time. You'll probably find Chinese buried there if you look hard enough.


True. I read that Alexandria around that time even had yogis from India teaching.

Dr. Youssef Khalifa, head of Ancient Egypt department, said to Luxor Times on phone “What was published in the newspaper is not true. There are no million mummies, a mummy definition to begin with means a complete mummified body and there is only one mummy found at the site of Fag El Gamous in 1980 which is at the Egyptian museum since then.” Dr. Youssef added “In the past few seasons of the mission’s work at the site, only poor skeletons were found and some thousands of bone’s remains. The mission violated the rules and regulations of the agreement with the Ministry of Antiquities concerning making press statements and that’s why the committee of the ancient Egypt department took the decision to stop their permission to work at the site after 28 years of working at the site and the last season finished last March.”

When we mentioned to Dr. Youssef that the director of the mission told Luxor Times that there have been misunderstandings, Dr. Youssef said “What was published was clearly stating wrong information and I think the Permanent Committee will also approve our department’s decision to stop the mission.”