posted on Dec, 4 2014 @ 09:12 AM
link
A giant Apple Pie on Mars? That's what this looks like to me. Really though, I think it's the remains of some ancient underground structure that collapsed in on itself. Some areas are more fortified than others so that's why the surface is uneven. What does ATS think?

This oddly circular outcrop has been discovered on Mars. Scientists don't know exactly what the 1.2 mile-wide feature is—though it appears to be surrounded by mass of smooth, solidified lava flows.

Snapped by HiRISE aboard the Mars Reconnaissance Orbiter, NASA speculates that "perhaps lava has intruded underneath this mound and pushed it up from beneath. It looks as if material is missing from the mound, so it is also possible that there was a significant amount of ice in the mound that was driven out by the heat of the lava." But they don't really know. Any guesses?

That's a cool looking feature , Here it is in context. 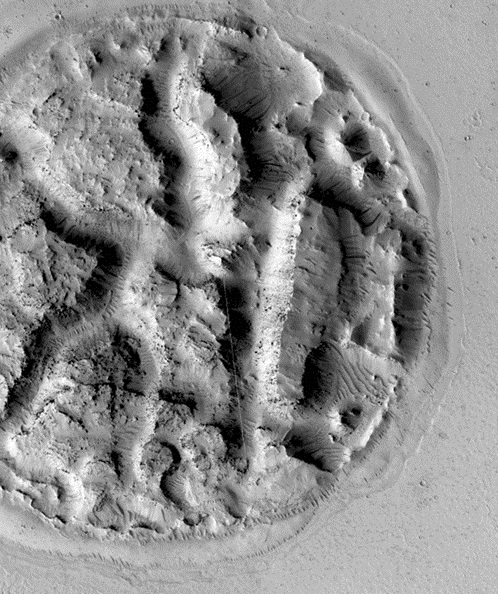 My feeling is it's volcanic in origin.

There are an array of features like this in the region that continue to puzzle scientists.


Maybe we can get a look at the wider region?

posted on Dec, 4 2014 @ 09:33 AM
link
Perhaps its just old lava tunnels finally becoming visible?? good stuff though cant wait to see some of the theories.

Neat context. From that angle I want to presume its a an impact crater with a resulting "upwelling" of some kind. If the region has other anomalies like this then the sub structure there on Mars might be different then the rest of the planet. Either that or there was a weird comet storm or something.

Maybe an ancient civilization was destroyed with "Hell Burners"?

posted on Dec, 5 2014 @ 11:15 AM
link
Obviously, it's the scale model for one hemisphere of the home-world we humans came from in another solar system... and it was built for Martian school children's field trips. The largest city was located on that squiggly landmass in the 'northern' hemisphere and it had great restaurants.

The other hemisphere, being mostly featureless ocean, was not built due to funding cuts in education that Martian legislators made, funding the military industrial complex, instead... and we see the results of those cuts in the war-torn, desolate Mars of today.

There may well be a more pragmatic, 'geo-logical' explanation involving lava tubes and erosion, but I like my idea better.
edit on 12/5/2014 by Baddogma because: oppsie fixie