I found this article about the film "9". I think they are on to something.

page: 1
31
<<   2  3 >>
log in
join
share:
payta
+4 more
posted on Nov, 29 2014 @ 02:34 PM
link
I have always loved this film, and I tend to watch it a couple of times every year. Last week I googled it and I found this article which caught my eye inmediately. It's about the esoteric meaning of the film, the interpretation of the film blew my mind, and opened my eyes. I had always found the film fascinating, and thought there were many things one could get only after a couple of reruns.

If you watched the film, then I think you'll find the article as compelling as I did. If not, then go watch it! Im sure it's available on Netflix, you could also rent it.

Here are a few quotes from the article.


Tim Burton’s “9” is a computer animated movie that was released on 9/9/09. While some critics claimed that the movie “lacked substance”, it nevertheless conveyed powerful messages through symbolism. It even defines a “new age” for humanity as seen by occult secret societies.

Each one of these rag dolls represents a group within humanity as a whole. The fate of each doll represents what occultists predict will happen in the Age of Horus.

9 is about humanity going through a transitional period, embracing a Promethean/Luciferian savior, and destroying the rule of traditional powers, such as religion.

Spoiler Alert:Before reading the whole article, I'd reccomend watching the film, since there are lots of spoilers.
Link to Article 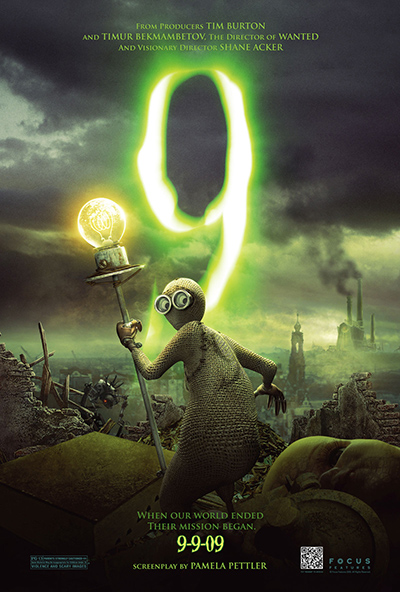 The movie poster depicts 9 holding his electric torch. Note that the release date of the movie was 9-9-09, a nod to occult numerology and one of the movie’s flirts with the number of the beast, 666.

I am a fan of the movie and definitely felt the esoteric mood Burton generated. Was he playing up to popular beliefs people hold about "secret societies" or using the film to broadcast Illuminati ideas?

posted on Nov, 29 2014 @ 03:02 PM
link
Interesting indeed thanks never seen the film but I do have Netflix I'll check this out at some points. What even weirder I read this thread at exactly 9pm UK time. Alright ok it's really 21:00 but you get what I'm saying

Not sure, I dont know so much about Tim, to say whether he's just fascinated by the occult world or a part of it, still when I read the review I felt it was spot on. There are many things I missed for not having certain knowledge of symbolism and esoterism in particular. Yet when watching the movie, you have the feeling there's so much being said that you are missing. This article helped me grasp a part of what I felt I was ignoring.


“In plain language, the Aeon of Horus means that the Godhead is being passed down to the individual who needs to learn to activate and find the God-Within themselves. This latest Aeon sees the beginning of the end of Divine Power and authority being owned by kings, queens, religions, governments, big institutions and dictatorships, which will increasingly all begin to fail spectacularly. The individual will have the opportunity to become fully liberated, in charge of their own spiritual destiny. ”
– Paul Dunne, The Magic of the New Aquarian Age and the New Aeon of Horus

Does this scene represent religious elites holding occult knowledge while forbidding their followers from seeking it?


The only thing the church and other power structures want is to maintain the illusion they are in control. Once we discover the secret that they have no secrets then they lose their power.

If you want to look at powerful symbology check icons like the flag, dollar and the cross for starters…

The only power they have is your belief in them.

I loved "9". Like so many awakening films it leads us back to ourselves. Not us per se, but to the inner conduit through which wisdom flows.

The kingdom of Heaven is within? All the worlds power structures and belief systems are designed to keep us dependent on them, instead of our own inner guidance . They have all the answers you need, including secret ones that keep you clinging on for more…

Thats why the Matrix is so compelling or Plato's Allegory of the Caves.

Through subtle symbolism, 9 describes the fall of authority (mainly the Christian Church) in an new era ruled by the Luciferian philosophy of obtaining godhood through one’s own powers. Using rag dolls and very little dialogue, 9 describes the basis of this occult philosophy and shows how it will prevail.

I honestly have no clue where they got this from. I never once heard the Christian church (or the downfall thereof) mentioned in the film. In fact, I don't recall much being said about the society that existed prior the film starting at all. Aside from a few Nazi-esque propaganda posters fluttering by and the obvious, that they had reached a sort of Asimovian robotic age. None of which leads the viewer to have any reason to think that the film was hinting toward the destruction of organized religion, specifically Christianity.

The part about the Homonculi is spot on though not to mention fairly obvious to anyone with even a rudimentary knowledge of alchemy and/or the occult. I thought that part of the article was pretty cool.

I do, however, agree that Hollywood is a bastion of occult practices and other most unsavory behaviors, including child abuse and the production and use of mind controlled slaves; primarily beta "cat" alters typically programmed using the Monarch methods, this behavior is, I believe, rampant among the ruling elite.

I just don't buy into the "Christianity is being targeted" stuff. Why would the occult elite want to destroy something that has served them so faithfully for centuries.

I thought it was sort of related to this:

I am the beginning. I am the end. I am the emissary. But the original time I was on the Planet Earth was 34,000 of your years ago. I am the balance. And when I say "I" - I mean because I am an emissary for The Nine. It is not I , but it is the group.We are nine principles of the Universe, yet together we are one.

The declaration above is typical of the channelled pronouncements of the Council of Nine - or just 'The Nine'.

That's actually why I bought the movie when I randomly saw it in a $5 movie bin.. It looked like it had hidden meaning in it and I'm always looking for what those types of things..

I liked the hidden meaning in the movie, but the movie itself is not so great. The main thing you'll notice is that the characters do represent more than themselves and like that article states it represents sort of groups of people or stages of humanities story..


It looked like it had hidden meaning in it and I'm always looking for what those types of things..

There are a few looses ends I believe, but i personally think the general concept this interpretation presents is quite revealing, and it may not cover every single detail of the plot, but leaves us with a few pointers to understand the rest of it. Regarding the Church, I think it's pretty clear how its role it's being played by 1. This is what the article says about it, and I find it quite accurate.

1 is stubborn, fearful, dogmatic, cowardly, and close minded. In short, he represents all of the Church’s shortcomings as perceived by elite occult groups. In the first part of the movie, 1 forces all of the dolls to hide in a decrepit Cathedral, discouraging his followers to venture outside of it. He wants his followers to stay hidden and ignorant as he believes that it is the best way to stay alive.

As the movie progresses however, 1 loses his authority, his scepter and his cape. He even loses the coin on his hat. In this transitional period, 1 ultimately represents the fall of religions in the Age of Horus and their loss of power, wealth, and authority.

All of this is pretty clear to me, and fits the plot of the film.
Religion has rescued and guarded humanity for so long, it helped the rag dolls get through the war and survive, but when 9 awakens, it has already become a drag.


If you expect to see nothing it kind of increases you odds of never seeing anything.

You can find meaning in anything phage.
It doesn't mean it means anything..

But often there are subplots and if you already know the subplot from hermeticism or the bible or greek myths, and you see it being retold you know to follow that subplot..

It's just a way I use to get new ideas on what reality is or may be.

Often times the cover story suffers because it's not the main plotline and people are like why would he say that? Why do you think Willy wonka makes an off hand comment about having to go through the wilderness or the desert forget which to get to the promised land?

Why does he quote shakespear "Is it my soul that calls upon my name?"

Why does he talk about ever lasting gobstoppers that a dark evil guy wants the secret sold to him? The guy who is tempting you to sell the secret to eternity is working for the guy who owns the "factory."

The scales show up to judge good or bad, and if you're a bad egg you fall into "the fire"

The kids in general all have "sins."


When you catch onto it you're like oh dang I see what they are doing here.


The 9 movie is full of meanings.. I'd recommend it for that, but if you just watch the surface story I don't recommend watching it at all.

Thanks for that, Best 7 min I've had in a long time. I'll be watching it time and time again.
It seriously blew my mind.
What is that? Im looking at Heliofant website right now, but I have no idea where this comes from.


All of this is pretty clear to me, and fits the plot of the film.
Religion has rescued and guarded humanity for so long, it helped the rag dolls get through the war and survive, but when 9 awakens, it has already become a drag.


Yes that's exactly what I saw too.
We are the ones who are rag dolls.