posted on Nov, 4 2014 @ 10:57 PM
link
The first Air Force One that carried President Eisenhower is found decaying in an Arizona field and it only needs $ 200 k to fix it up which is not a lot of bucks in the big picture it would take $200,000 and 30 days of work by a team of mechanics to restore.

Timothy Coons, a contractor who serves as the plane's caretaker, is looking for a museum willing to take it and restore it.

www.dailymail.co.uk... .html
So what would your ideas be to raise the money for a restoration and preservation , kind of like owning a race horse between 100 owners

B ] email all the rich people and beg them

lets see who has the best idea 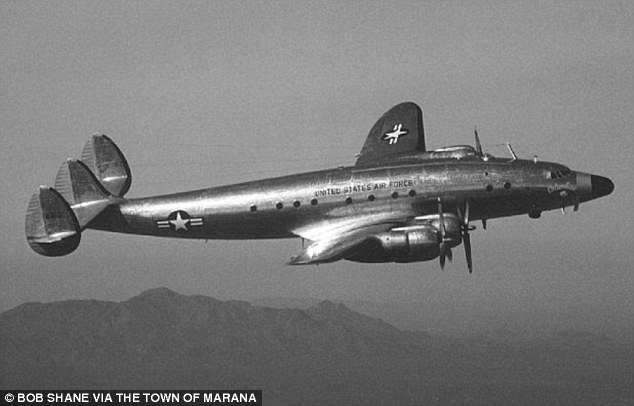 I love the look of those old planes and cars from yesteryear Phage , it would be a shame to see a plane with this history go for scrap .

Hopefully a Multi-Millionare reads these threads and wants a original MK 1 plane , we have a show in the U.K called amazing spaces where people turn or make small things into great living areas one guy bought a small private jet and turned it into a lovely little pad in his garden , shower ,toilet bed ,everything for about 30 k

Some Bankers get millions in bonuses per year , imagine the toy you could turn this into

Second, there are constellations still flying.

But yes, the original Air Force One does have some extra significance. Have you been to Tucson? Kennedy's is at Pima.

originally posted by: projectbane
a reply to: douglas5

It's a MK 1 VC-121A the history alone makes this plane worth saving , send the horses to the French they know how to deal with them

With my criminal history Phage they would have a fit if i tried to get into America , and yes it is the Stones album logo

i saw them live years ago great band

I think the best bet would most likely be contacting air museums.

Really don't like watching beautiful pieces of engineering vanish, but I would hope anyone rich and willing to part with cash would do so in a manner more beneficial to mankind.

Even as a non flying tourist attraction people would pay $ 1 to sit in the presidents seat it would easy pay for the restoration or we could ask Phage /Mick to get his hand in the pocket .

The Stones own mansions they have forgotten about

posted on Nov, 5 2014 @ 05:58 AM
link
Crowd source funding maybe a answer to this contractors quest to restore the former AF1.

posted on Nov, 5 2014 @ 06:03 AM
link
Very surprised some air and space museum hasn't picked this up (In the states there is a Dayton, Ohio museum, the main Smithsonian Museums in D.C., etc.). Eisenhower's presidential plane could even be bought and set up at his presidential library or museum and set up close by. I hope communication is flying on the need for this one to find renovation and a home.

The wikpedia article on this plane, named Columbine II

it would take so little money to get this done and as the poster above you CeeKers said crowd sourcing would be a great idea .

05DEC73 Departed Miami for Amsterdam with a load of produce. The aircraft was subsequently grounded at Amsterdam with engine problems. 18FEB74 Departed Amsterdam for Coventry, UK where further repairs were carried out. 07MAR74 Positioned to Dublin to operate a livestock charter to Tripoli for Livestock International. 08MAR74 Departed Dublin for Tripoli. 10MAR74 Returned to Dublin empty. The aircraft was grounded at Dublin pending inspection by the FAA.

It's in decay like the Country, either one could be fixed up if some attention was paid to it.