After the unoffical #IamRepublican campaign and the Koch brothers dumping millions into political advertising, Rock the vote has come out with their own video. I'll admit... it's pretty good and will probably be one of this years marketing success stories.

Since the 90's Rock The Vote has been on a mission to engage and incite our younger generations to get involved in the political process.

Addicting Info posted an article earlier about the reaction of conservatives to this years video.

But of course, conservatives hate everything about it. But the reaction from the right over this video is a good illustration on why young people do not vote conservative.
The editors at the Washington Free Beacon are having a melt down over the video showing two people in one voting booth. “SHAME” the headline screams, “Rock the Vote Video Glamorizes Illicit Voting Practices.”
Really, because apparently young people take everything they see 100 percent seriously… or no, wait, I think that’s conservatives.
Over at Breitbart the outrage is centered on what they say is the video’s “promotion of abortion and marijuana.” Because… well, if I had to guess, I’d say it’s because it’s Breitbart. 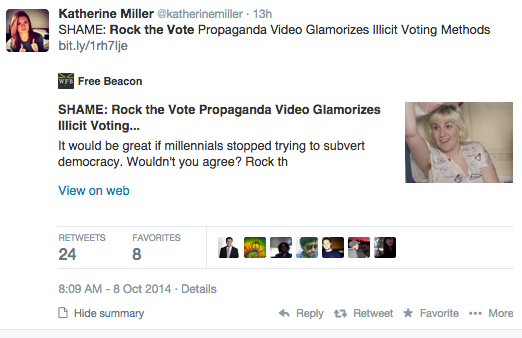 A quick look on twitter #TurnOutForWhat shows a completely different atmosphere than the #IamRepublicanhashtag. What did you think of the video? I liked it overall, but they could have gotten a few more issues in there that are important to people.

One girl said she was turning out for global warming awareness !!!

I thought they changed it to "Climate Change" a while back?

And the kid at the desk is a typical Jay Carney type. Yes, very appealing and heart warming indeed.

Oh, and the "sign" that said be prepared to show I.D. was deluxe

But the "hidden" message is that voting might be pointless !!!


Conservatives are having a virtual meltdown over the latest “Rock the Vote” video, featuring rapper Lil Jon, along with a cast of celebrities like Lena Dunham, Fred Armisen, Natasha Lyonne, Darren Criss, Ireland Baldwin, Whoopi Goldberg and more.

"Conservatives" might actually be relieved this was all the "Liberals" could amass for an "important" message.

Obnoxious and cliche but... the reactions are far more so.

Maybe it's my age showing here but the two people in one booth thing did set off an "old person alarm". Everything else seemed far less biased than the "I am a republican" thingie. As stated already, the reaction shows clearly why the republicans will lose out more and more as their generation gets older. They are banking on previous generation filling their ranks but it's not going to happen (ever) unless they light(en) up a bit.

Prohibition and inequality is just too old fashioned.

posted on Oct, 8 2014 @ 11:54 PM
link
I didn't know Rock the Vote was associated with a political party. I thought it was about energizing young people and getting them to turn out. So is Rock the Vote owned by libs / Dems or is it non-partisan?

If it is pro either party then I am against it by default.
edit on 2014/10/8 by Metallicus because: (no reason given)

originally posted by: xuenchen
from the "Addicting Info" link.....


Conservatives are having a virtual meltdown over the latest “Rock the Vote” video, featuring rapper Lil Jon, along with a cast of celebrities like Lena Dunham, Fred Armisen, Natasha Lyonne, Darren Criss, Ireland Baldwin, Whoopi Goldberg and more.

"Conservatives" might actually be relieved this was all the "Liberals" could amass for an "important" message.


What's even more funny to me is that the reactions of it being "liberal". So... republicans don't want to look at prison reform? They don't want equality? They want to continue an immoral and unfair drug war?

These are just some of the platforms they need to rethink in order to survive as a political party. Smart republicans wouldn't tackle these issues and just stick with the official message of "small government, free market" which they always seem to lose sight of.

Made me wonder... Looks like it's mostly women rockthevote.com

And the site says:


Rock the Vote is the largest non-profit and non-partisan organization in the United States driving the youth vote to the polls. Fusing pop culture, politics, and technology, Rock the Vote works to mobilize the millennial voting bloc and the youth vote, protect voting rights, and advocate for an electoral process and voting system that works for the 21st century electorate.

A gun with a paddle lock on it!!

Which by the way is about as asinine as it gets, and shows just how idiotic 'Rock the vote' is.

Here is a picture of a properly secured firearm for example:

But their real intention is just to ban them ALL out right.

Why yes the poor LGBT's should experience what all us straights do by:

Alimony,Palimony,and letting their 'spouse' take the home,cars, and dog, and the proverbial kitchen sink.

Why YES PEOPLE END the 'discrimination', and let them get 'equality'.

Oh and please IGNORE the divorce rate in this county. That doesn't fit the false narrative of 'Rock the Vote'

Rumor has it that 50% of marriages end in divorce.

Sounds like what the current guy that was all about 'hope and change' has been shoveling for the last 6 years.

I guess that was one promise he delivered on by 'shovel ready'.

Because some us have been shoveling the snip because it gotten so deep.

But hey them evil Republicans for getting upset.

For more of the same.

How The $1.2 Trillion College Debt Crisis Is Crippling Students, Parents And The Economy

I wonder how students gonna pay back those loans considering jobs are hard to come by these days.

A Record 100 Million Americans Not Working

But really people just ignore all the above there.

posted on Oct, 9 2014 @ 12:04 AM
link
Awesome video that relates to the younger generation, something conservatives know nothing about.


What did you think of the video?

I didn't know who any of those people were but I thought it was humorous. Fun and funny doesn't seem to be a Republican strong point. I know they try but more times than not they come off as dry or even creepy.

Even though there wasn't any specific party endorsed and only issues were brought up one could easily tell which way it leaned. Still either side of those issues can vote either way. Honestly if people get involved because of the video then it is a good thing. Not everyone thinks that way though as I remember there have been those in the past who have tried to persuade people to not vote.

Good point, they could be voting against marriage equality and against reproductive rights.

posted on Oct, 9 2014 @ 12:24 AM
link
Republicans should release another IAmARepublican video

But, ever since Clinton popped off with his confusion regarding what the definition of "IS" is, Democrats, and Republicans in kind, pushing up minimum wage and such, increasing my cost of living over 200% (under Clinton- only been about 25% since), they have been chasing that rodent down the rabbit hole.


My opinion, is if MTV and the like are going to be pushing "ROCK THE VOTE", they better be on the books as some sort of activist committee. They should give equal and fair time to anyone on the dole, regardless of party affiliation, and none of the Vajayjays should be offering up their interpretations of which pie hole is worthy of anyone's vote.

This "core curriculum" they're pushing down student' throats is bad enough, and it seems like every day I have to teach my nephew the difference between right and Democrat. Fortunately, he's 8 years old, and with some logical thought, he's come to the conclusion (on his own by the way) that Obama and the Democrats are screwing people up one side and down the other. He also realizes Republicans aren't much better, so there is hope for the future.

My opinion, is Democrats are for change, simply for the sake of change. There's no logic behind it, only 'it sounds good'. Republicans resist change because, if there's no reason to change, why change?

Is it worth noting Lincoln was a Republican? Democrats got the US into the Viet Nam war and a Republican got us out?
Probably not.

Until, unless, people stand up for what's right and what's proper, the same old group of stodgy old men will be running the USA... Democrat or Republican.

To be honest, Democrats have messed up a lot more, but no one will stand up and fix the problems.

posted on Oct, 9 2014 @ 12:33 AM
link
The conservatives are upset because when more people vote....the Republicans lose.

originally posted by: olaru12
The conservatives are upset because when more people vote....the Republicans lose.

And that should have sane people pissing their pants.


I hear all the time, "if it ain't broke don't fix it", yet the Democrats are hell-bent on fixing things that aren't broke.

You have alot to say for some one that didn't watch the video? How can you judge? How can you say they need to give equal time, do you feel the same about AM radio or Hannity or how about tea party commercials?

Rock the vote is directed towards young people and there interests, kinda why the conservative message doesn't resonate with them.
edit on 9-10-2014 by LDragonFire because: (no reason given)

originally posted by: LDragonFire
a reply to: abecedarian

You have alot ta say for some one that didn't watch the video? How can you judge? How can you say they need to give equal time, do you feel the same about AM radio or Hannity or how about tea party commercials?

Rock the vote is directed towards young people and there interests, kinda why the conservative message doesn't resonate with them.

Well, tell me about the video. I can't watch it. Youtube tells me an error has occurred.

If you want to spread your message, please do so. And since the 80's I've found that "Rock the Vote" thing to be little more than a propaganda machine meant to bring those young people in line with the Democrat perspective. Not once, in over 20 years, have I seen MTV provide anything other than the "Democrat" position.

And, yeah, to some extent, I think Hannity, Rush and the lot should be giving ample, equitable air time to 'the opposition'.