A female Kurdish fighter carried out a suicide bomb attack against jihadists from the Islamic State group outside the embattled Syrian border town of Kobane on Sunday, a monitor said.

The Syrian Observatory for Human Rights said the woman blew herself up at an Islamic State position east of the city, killing a number of jihadists who have surrounded Kobane and are battling to seize it.

Well, I cant say that I have ever heard tell of a story such as this, a suicide bomber going after, for all intents and purposes, another suicide bomber ?

We will have to see if this is the start of new trend ? Not that I am for this kind of thing but one has to wonder just how ISIL will take to this ?

What the middle eastern world is up to now.

posted on Oct, 5 2014 @ 07:41 PM
link
It's ironic that a group of terrorists would be attacked by a suicide bomber. I'll be curious to see if things like this start happening more often.

posted on Oct, 5 2014 @ 07:41 PM
link
This isn't really a good thing but at the same time you can't ignore the irony. I really wish the Kurds wouldn't lower themselves to the kind of style of attacks their enemies would employe, but at the same time it's almost funny that IS would get hit by the same kind of violence they would so easily encourage against anyone they see as infidels.

Is, after the event you're dead.

Nothing ruins a Celebration quicker than being dead.

thank you for your sacrifice. Seriously.


now to go back and READ the article..... I did this just via the headline of this topic. Not usually a wise thing to do but hey. That was my knee jerk response to the headline.

Yeah.. no this is really bad news. The kurds are supposed to be an organized fighting force defending their life. Not sacrificing themselves thinking there is a bonus.

It sounds like hell over there. Why can't one side be relatable and just want to live peacefully and fight because they are defending that life?

Not the correct response. Suicide bombing is radicalism. I don't want anyone thinking like that no matter which side they are on. I am afraid it will never die out over there. It's a mental virus.

originally posted by: WhoDat09
Tod bad for them, I guess none of them are getting their 72 virgins, they were killed by a woman after all.

What does a female martyr get? Doubt she cares much for 72 concubines. 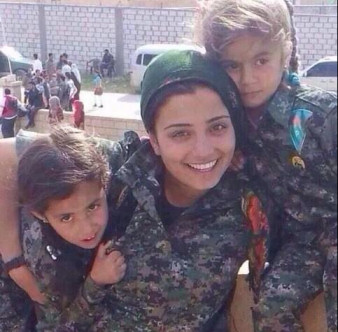 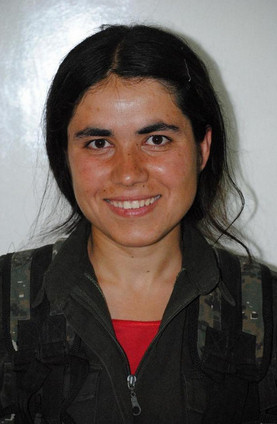 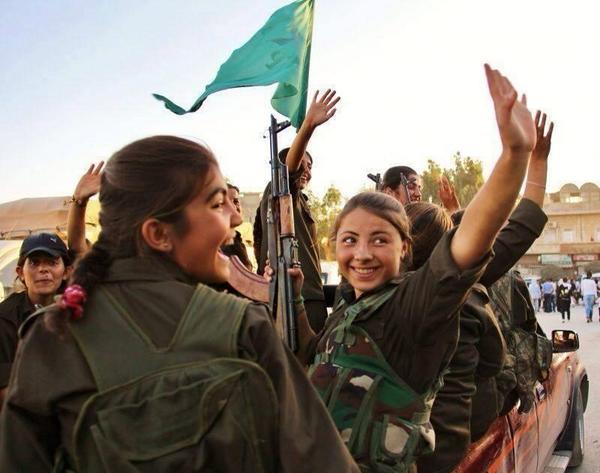 For god's sake, not even the original article mentions her name.

Her name was Arin Mirkan.

Obviously a true hero, unlike the ISIS cowards who only kill unarmed innocents.
edit on 10/5/2014 by NoRulesAllowed because: (no reason given)

I guess the fact that she was surrounded by their fighters makes it a little more palatable. It wasn't a senseless attack on a target of opportunity. It wasn't for religious reasons, it was just because she was going to be killed either way.
edit on 5-10-2014 by GogoVicMorrow because: (no reason given)

daaskapital
+23 more
posted on Oct, 5 2014 @ 08:45 PM
link
I think people are misunderstanding the reasoning for the suicide. She was actually surrounded by IS fighters and had no where to go. Instead of being captured by IS and treated as a prisoner/slave, she decided to make the ultimate sacrifice and take her life in order to take a few IS fighters with her.

Kobani, the city of which she was defending, is currently under siege by IS. IS have been hitting the city with tanks and mortars, and have finally moved in to secure some districts. Every minute counts, and the Kurds have found themselves in desperate times.

And to be frank, i would rather bomb myself and enemy combatants, than be captured and beheaded.

Arin Mirkan was a female Kurdish soldier who found herself surrounded by ISIS troops, but rather than surrender, she decided to detonate an explosive, killing herself and a number of enemy soldiers.

Mirkan was fighting near the embattled Syrian town of Kobane, which is falling under the control of ISIS. As the jihadists moved in to capture the woman, she instead set off an explosive device that killed her and an unspecified number of militants.

“The operation caused deaths, but there is no confirmed number,” said Rami Abdel Rahman, director of the Syrian Observatory for Human Rights.

Rahman said it was the first instance of a female Kurdish soldier carrying out a suicide bombing against ISIS, which has used the tactic many times in the past.

ISIS militants have been making their way toward Kobane, the third largest Kurdish town in Syria, for the last several weeks. The militant group has been cementing its grip on the Kurdish region along the Syria-Turkey border, drawing a response from Kurdish militant groups.

ISIS has gotten so close to the the town of Kobane, also known as Ain al-Arab, that more than 186,000 people have fled across the border into Turkey. The group’s progress has also been slowed by a series of airstrikes led by the United States.


for all intensive purposes

All intents and purposes. I just learned that a year ago (almost 30) and was amazed. I also used to think Carte Blanche was spelled Carpe Launche (like a fish chucker). Something to do with Carpe Diem and hearing it wrong.

Ugh, when I was replying I saw the bug in your sig line and almost smacked the laptop. First time I think it's gotten me.

I'm glad to see people pushing back against these jackasses, but man does it make me sad to know someone had to give their life like that.

Glad some other members chimed in to give a little more perspective. It seemed a little odd that she would suicide bomb IS. Suicide bombings only seems to make a lot of sense if you're trying to kill civilians (not that it makes sense...). Probably a much better way to go than letting those sick F-s capture her.

I can't believe IS has caused almost 200,000 people to flee. I thought they were like a local gang. I'm getting a very different picture now. Time to fight back. Good for her.

If Arin Mirkan was an American soldier, she would be eligible for the Congressional Medal of Honor.

"Suicide bomber" has sinister connotations that don't appear to apply in this case.

Perhaps it would be better to recognize this as an act of war that, given the well-known consequences of being captured by the Islamic State, made this sacrifice the most sensible choice a soldier could make under the circumstances.

I offer my utmost respect.

originally posted by: Domo1
I can't believe IS has caused almost 200,000 people to flee. I thought they were like a local gang. I'm getting a very different picture now. Time to fight back. Good for her.

Maybe this is the impression we are supposed to get, that ISIS is "just some local gang" in the desert beheading people.

Fact is, they seem to have surrounded this town for several days and shelling it, 200,000 fled already...and MANY including those Kurdish fighters are getting killed.

And the world is just sitting here and let this happen?

The "best" (oh the irony...) was this report yesterday that we have allegedly found Jihadi-John and some hostages but (and I cite now)...

Reaper drones deployed high above the terrorists’ strongholds are also believed to have identified hostages wearing orange jumpsuits but top brass are thought to have currently ruled out a rescue operation because IS defences are too strong. "

Wow...we (the West) must really have some #ty military (/SARCASM) when a rescue mission of hostages would end in "bloody failure" and when we consider IS defences "too strong". (Let alone the bizarre fact that this is in the news which is wrong on 1000x different levels).

Fact is that JIhadists are killing right now and it is beyond me how it is even possible that they they can surround a town and there is no assistance from anywhere, be it Turks, NATO or whoever.
edit on 10/5/2014 by NoRulesAllowed because: (no reason given)

Let us suppose that the woman had members of her family killed the terrorists. So was she driven by culture or simple human nature? It would happen anywhere given the right circumstances and we don't know the circumstances, so we are wasting our energies on this thread.