The cops there are gunning for a war with the people (because TPTB controlling them are obviously ordering it to happen) and this should be obvious to anyone with two firing neurons.

How can you tell?

Because if they didn't want a war with the people, they could do the simplest thing in the world. They could APOLOGIZE for gunning down an unarmed kid and shooting him multiple times for no good reason. They could discipline the officer and publicly offer the parents a heartfelt apology and remunerations. That wouldn't lessen the sting of losing a child, but it would certainly end the threat of violence on the streets.

But no--this is MURICA, where people would rather avoid admitting culpability than man up and do the right thing.

TPTB are looking for a reason to unleash hell on the people, and this is proof. Otherwise, any decent human being involved in this situation would step forward and diffuse the situation with two simple words. "I'M SORRY."

posted on Aug, 18 2014 @ 10:06 PM
link
I missed the press release where they said that it was found the cop was guilty of murdering Brown?? Do you have a link? Otherwise, I am not sure why anybody should apologize for any wrongdoing until wrongdoing is found.

It is a tragedy either way.

If the cop is found innocent will the citizens be ready to line up and apologize??

I would hate to think that a guy was murdered over cigars, but I am willing to wait and see what the final reports turn up before convicting anybody of anything... Including Brown.

Other than that, I agree that the rioting and looting in Ferguson is indeed.... Ridiculously stupid.
edit on 8/18/2014 by Kangaruex4Ewe because: (no reason given)

I'm not sure that I can reach the same conclusion you do, and I don't see an argument as "proof."

Because if they didn't want a war with the people, they could do the simplest thing in the world. They could APOLOGIZE for gunning down an unarmed kid and shooting him multiple times for no good reason. They could discipline the officer and publicly offer the parents a heartfelt apology and remunerations. That wouldn't lessen the sting of losing a child, but it would certainly end the threat of violence on the streets.

You're assuming facts not in evidence. How do you "know" that he was shot for no good reason? Why discipline the officer if he didn't do anything wrong (because we don't know that he did). Offer remunerations? If they announce that it was bad shooting, and fire the officer, the lawyer for the family will not get remunerations, they'll get somewhat more than a million dollars.

And your belief that it would "certainly" end the violence on the streets? Why should we believe that to be true? Wouldn't it be aggravated once the police announce that they are entirely at fault (whether they were or not)?

Why wouldn't that set a precedent telling the officers "You must not hurt a black man, or we will be forced to fire you and the City will lose millions in an attempt to pay off the mob?"

But I may be misunderstanding you. Clear it up for me, if you don't mind.

Much of what you say is true and police militarization needs to be on the national table. I strongly lean toward the cop shooting Brown as being murder but I don't know anymore than anyone besides the officer knows. The cop should be punished only if he did murder Brown. That would simply be the public behaving the way we think the cop did. The FPD's handling of the situation as well as the municipality and state... is absolutely horrendous.

I think you are right- For whatever reason the police/SWAT seem to be antagonizing the people (watching a live stream of the protest now). I just don't get it. The community seems to be containing itself pretty well, other than when police move forward for no reason. I just don't get it.

Also, I know that this whole thing began with a tragedy, but it irritates me that people are turning this into a race issue. The big picture is the militarized police who act above the law. Regardless, if this is the event that causes the law enforcement to change, so be it. I'm crossing my fingers, but I believe this is a step in favor of TPTB, unfortunately.

The only problem is, this is America. People are not guilty until it's proven in a court of law.

Ferguson is a test proving-ground for all Progressive levels. 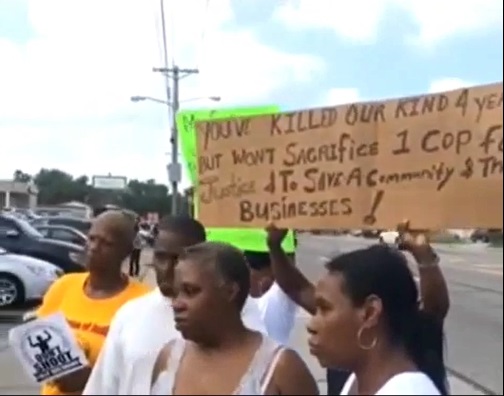 Who made you judge, jury, and exectioner?

Yeah. What gets me is that they had militarized police with some tear gas and rubber bullets.

Now, they have the National Guard. The real military. I bet they have more than tear gas and rubber bullets.

It's time the citizens remembered that fact, too.

The only problem is, this is America. People are not guilty until it's proven in a court of law.

You're right. In Ferguson, this is a HUGE problem.


You have to know that a trial run at martial law and using thweir new domestic tactics is going to happen in a town like this with a large minority population.

Oh stop it. That's just like saying all Conservatives are racist neocons.

posted on Aug, 19 2014 @ 11:08 AM
link
I'm glad I don't live there. I wouldn't want my children anywhere near a place where police brutality is the norm and this over aggressive non trained force is in charge.

If you live somewhere like that, let us know. I won't be visiting there either.

In case you noticed, I don't care about any of the details past the fact that this man is dead. Bad choices were made and it cost a man his life.

posted on Aug, 19 2014 @ 01:04 PM
link
a reply to: Kangaruex4Ewe
Yeah! If evidence shows the cop was justified, will all the rioters and looters and protesters line up and apologize for jumping the gun??? No. They will not. Until the EVIDENCE comes out, like all cases, nobody knows what really went on, unless of course, there is a video. Law works slow for everyone. You just have to be patient and wait for everything to be investigated and all the facts put together.