Jews and Arabs refuse to be enemies

As Egypt attempts to broker an extended ceasefire in Gaza after 15 days of fighting that has resulted in more than 620 deaths, some Israelis and Palestinians are taking to social media to show their desire for an end to the bloodiest conflict between the two warring sides in 15 years.

Israelis and Palestinians of all ages are posting photos of themselves with messages that project beauty, hope and despair.

The hash tag #JewsandArabsRefuseToBeEnemies was propelled by a photo taken by Arab-American journalist Sulome Anderson, kissing her Jewish boyfriend, Jeremy. 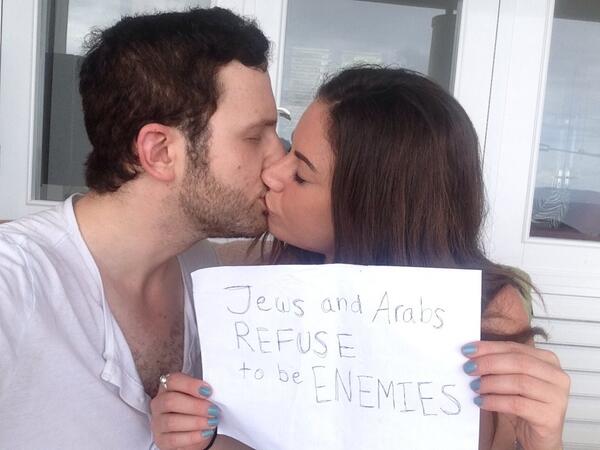 Sulome Anderson @SulomeAnderson Follow He calls me neshama, I call him habibi. Love doesn't speak the language of occupation #JewsAndArabsRefuseToBeEnemies 5:58 AM - 14 Jul 2014

It's refreshing to see news of this nature, showing that not everyone has gone insane regarding the current conflict. 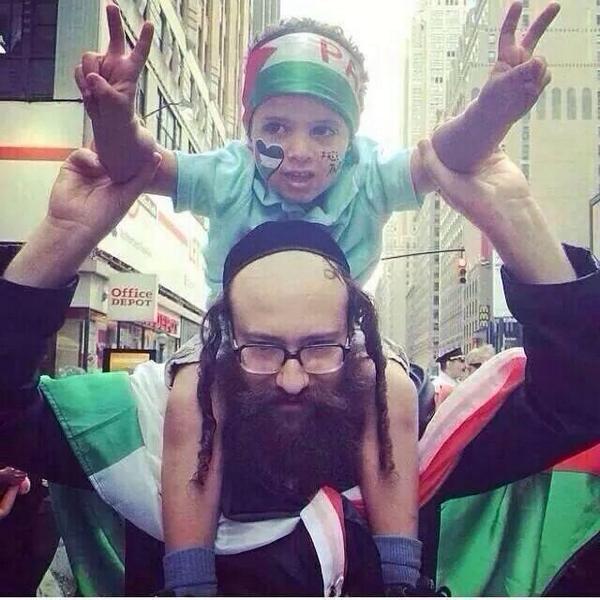 It is nice to see hope occasionally.

posted on Jul, 23 2014 @ 11:30 PM
link
Thats awesome!!! SnF for bringing it forward , glad to see some positive for a change involving them . Hopefully this will catch on.

posted on Jul, 23 2014 @ 11:31 PM
link
I love it. It's nice to see folks not listening to others who tell them whom they should hate and for what reason. They are using their own mind, heart, and courage to do what they know and feel is right.


They’ve never been enemies until these creeps (zionazi) showed up.

Wasn't there like a huge campaign a year or so ago just like this? Remember that? It gained a lot of "awe"s for a little while then just as quickly it was gone. I guess that's what they have to do every so often is take to social medial. It's Bibi that needs to settle the F down and reign his soldiers in. I guess I'll just leave it that before I begin to rant. Just finished a couple hours of research on the history of Palestine and the UN resolution of 1948.

It's cute you think things will change. Tell me how it works out ok?

posted on Jul, 24 2014 @ 12:31 AM
link
This is not at all what it is being portrayed as.
It was started by an employee of a UN alphabet agency that has an agenda for the Palestinian cause.

This movement was started by


While Ms Anderson and her boyfriend pushed the hashtag to new height in the twittersphere, the social media phenomenon was actually started by two US University Students, Abraham Gutman of Jewish origin and Dania Darwish, who is of Arabic origin.


Source
This story even masks the occupation of the UN employee only listing her as a university student.

It is a nice gesture on the outside minus the hidden agenda but people who do this in public photos are probably in danger from radical jihadists. The same can't be said about Israelis, worst to happen is they would be shunned, and discriminated against, but at least their life wouldn't be in jeopardy by default from other Israelis.

The failure to recognize the two different levels of reaction this type of statement makes, is a type of false equivalency that masks the extreme radicalization of one side and delegitimizes the tolerances of the other. It only favors one side, in other words it is a type of pro Palestinian propaganda.

Awesome message of hope, in a time of so much despair. I hope it catches on like wildfire.

Only this past year or so, have I seen the wave of social media as having a real impact on people. It's messages like this, that needs to be shared.

Awesome message of hope, in a time of so much despair. I hope it catches on like wildfire.

Only this past year or so, have I seen the wave of social media as having a real impact on people. It's messages like this, that needs to be shared.

Social media is also the place where planned propaganda campaigns are unleashed, such as this one.

I doubt that this little story on social media is in anyway planned by any major players, either in Israel, or Gaza.

I personally think it's a lovely message that has the potential to act like an SOS signal or along those lines. Something that stops BOTH sides for just a minute and presses 'pause' on the bloodshed.

It must really pain you that these human beings are showing common decency to one another. Why else would you try to debunk this? An act of kindness between these people and you try and take a dump all over it, you should be proud

It must really pain you that these human beings are showing common decency to one another. Why else would you try to debunk this? An act of kindness between these people and you try and take a dump all over it, you should be proud

I didn't try, I hit a home run.
Alphabet agency that exists solely to further the Palestinian cause has their UN employee lurking in the shadows of this story, why no transparency? Because they are trying to falsely make it appear that this just broke out spontaneously, and the UN does not want to bear responsibility when jihadists start chopping peoples heads off and mutilating female genitalia over this.

Restraining my kneejerk hole-poking reflex for the moment, may I ask what would be a more even handed pro-equality stunt, short of Palestinians going on TV and asking for an Israeli invasion to free them from their "more radical" communities?