Sure that what the world needs right now, more escalation. It is just kicking off all sides
edit on 16-7-2014 by sosobad because: (no reason given)

Ukraine gathers army, run military actions against mostly ordinary people with weapons there, while the official Russia doesn't do a thing, and yet, they will widen sanctions against them. Does anyone else finds this even more suspicious? And what a timing, right after Brics meeting...
edit on 16-7-2014 by Nikola014 because: (no reason given)

The bear and the sleeping giant will battle it out by proxies as they always have.

And rightfully so. The current economic system is broken and it holds all of it's member nations hostage. It wil take some time but BRIC has been moving in this directions for a while and the US and western interests have done all they can to cripple it.

Russia will, as the below statement verifies, respond,

I will take a seat and see what happens next, the US should not rely on Europe's backing for too long.IMO.

Obumma has both barrells loaded and continually shoots himself (US) in the foot.

B.R.I.C.S will get stronger as time passes and more countries join, leaving the US standing alone. (almost)

Russia quickly denounced the moves and vowed to retaliate. “We condemn those politicians and bureaucrats who are behind such actions,” Sergei A. Ryabkov, the deputy foreign minister, told the Interfax news agency. Mr. Ryabkov said that Moscow would respond with countermeasures that would be “quite painful and serious.”

posted on Jul, 16 2014 @ 08:26 PM
link
Pffft.. Sanctions? Russia and China just formed BRICS. There are 130 countries willing to do business with them. Obama's just running his mouth. Russians been dumpin our treasury bonds all year by the tens of billions. They don't care about buying any of our debt. Europe better think about how they are going to heat their homes the next few winters. I can't believe the Germans are even considering it after being spied on and whatnot. We are going to end up without a friend in the world right when we need one the most.
edit on 16-7-2014 by rustyclutch because: (no reason given)

I might as well go ahead and admit it now....

And the US sanctions are still not working... unless Obama's true goal is something else entirely. 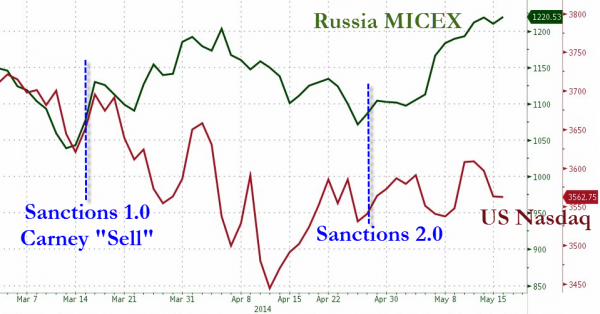 Ukraine gathers army, run military actions against mostly ordinary people with weapons there, while the official Russia doesn't do a thing, and yet, they will widen sanctions against them. Does anyone else finds this even more suspicious? And what a timing, right after Brics meeting...

That's exactly what I was thinking when I heard this. Hell, Russia should be commended for their tolerance of the US and their cronies in Ukraine. I think Russias patience is wearing thin and when they strike it will be hard and they will mean it. Their backs are against the wall. Just what the hell is Obama and the nuts behind him trying to accomplish anyways?

posted on Jul, 17 2014 @ 01:12 AM
link
Maybe Obama is doing Russia a favor, if the US economy is about to crash then the less anyone has to do with the US economy the better for them.

Honestly, what's the point? The world wouldn't be worth living in if nuclear war broke out in my opinion. But then again maybe it would. The dawn of a new age if mankind exhausted all their nuclear power?

I sometimes regret ever bringing life (my twin boys) into such a f'd up world.

9/11 showed that you don't need intercontinental missiles for war. China or Russia could easily replace incoming international passenger jets with their own nuclear laden 767's. US would see cities explode without knowing who did it. Was it terrorist, Russia or China. Would US respond without proof risking even greater devastation! I think not.

Because elite have bunkers they can gamble humanity without risking their own life's. But even if we take two steps backwards, your boys may live to see a golden age, God willing.

posted on Jul, 17 2014 @ 01:51 AM
link
Unfortunate for us that Russia is spreading it's influence in Latin America & Cuba unchecked. When presidents are doing their job you won't feel like the World around us is literally going to hell. When they are so caught up in everything but American interests you start hearing about crazy # happening everywhere & all the time. Like just recently a North Korean ship with unknown load docks in Cuba. This happened not to long ago. When twice a week we either scandals, crisis, foreign dictators on the move, Militants seizing countries, we forget about many scary could be scenarios. Anyway I think this assessment explains just how dangerous it can be to have a president who can't handle the job.

posted on Jul, 17 2014 @ 02:27 AM
link
Maybe because Russia, Putin reopened the old base of the Soviet Union in ur courtyard, in Cuba! 250klm from USA... the one that was used for stealing inteligence.

here are the news, u need to translate it... www.kontranews.gr...

Now all dirty secrets will be known... ! Its yesterday news, so we dont know what came first...sactions? or cuba base.
edit on 17-7-2014 by Ploutonas because: (no reason given)

Could be, maybe the world elite know global warming will have same effect for humankind with problems to big to solve. So maybe a nuclear war with them ''safe'' in bunkers is a good enough solution for them.. (a nuclear war will bring global temperatures down ALLOT).
Still, it's kinda like too hard to believe they really do this but who knows.
edit on 17-7-2014 by Plugin because: (no reason given)

posted on Jul, 17 2014 @ 03:05 AM
link
This is new and related : BRICS will examine the suctions and they will act as appropriate against usa and eu. Now since BRICS have a common interest, they will act all together... lol