How can anyone leave their kids in the car when the heat index is 105. She should get jail time and lose her kids.

group of shoppers at a Texas strip mall smashed through a hot car's windows Monday to pull out two screaming children locked in by their mother, who was getting a haircut.

Yes. And the charge should be attempted murder!

Why do these people even have children?

The next time this happens, the parent should be strapped to the seat for a few hours...with the goddamn heater on.

Enough of this sh!t parenting.

posted on Jul, 16 2014 @ 10:18 AM
link
I agree 100% OP. In fact, EVERY single time this happens whether the children survive or not the parents responsible should face charges and jail time. This is sick and depraved.

Do you know how long a woman's haircut takes?? Hell, if she was getting it 'done' and not just cut it easily could have taken 3-4 hours. What kind of animal thinks it is okay to leave children in a hot car for even minutes let alone hours???

The woman got lucky. Simple as that. If these shoppers had not smashed the windows - she could easily be looking at 2 dead children and her face pasted everywhere for the world to see. Also, she is lucky the shoppers did not call the police. I would have. I would've gotten the kids out and called the police first thing. (Not that the police have the best record, but CPS needs these kids before the mother kills them.)

They honestly should interview the eyewitnesses and track this woman down with the video. It is about time the law starts making examples out of terrible parents such as this one.

Just wait - a few bleeding hearts will be in here any minute to tell you, 'It was an accident, it happens." Do not listen to these people - if they have children I feel for their safety. I have a child and I will never ever excuse a parents doing this to their children. No it was not an accident. No it does not happen. BS. It was intentional and thus should be attempted murder.
edit on 16-7-2014 by lightedhype because: (no reason given)

posted on Jul, 16 2014 @ 10:35 AM
link
All around the greater Houston area there have been reminders along the roadways to keep an eye out for children left alone in vehicles.

Just to give you all an idea just how hot it can get around here, in the short amount of time it takes to refuel your vehicle with the engine off, the interior becomes sweltering. Not just a little hot. It's the kind of heat you have the keep the doors open just to breathe.

Can't imagine what those poor kids went through. There is no excuse considering all the tragic stories we hear about on much too regular a basis. This mother ought to be in jail.


...She should get jail time and lose her kids.

I agree. The publicity just might educate and deter the ignorant.

posted on Jul, 16 2014 @ 10:55 AM
link
I have a 5 yr old and would NEVER think of leaving him ANYWHERE out of my sight for a second. It disgusts me to think a parent would be so selfish as to leave children in the car so should could enjoy her haircut in "peace". She didn't say that, but if you have kids, you know. Sometimes they drive you nuts, kids can do that. However, one part of being a parent is sacrifice. Another is good decision making. She did neither. I say get the license plate off the video, call CPS. Snatch those kids up, put them in foster care until she can prove she can be a responsible role model for her children before they are returned. Plus make her wright a thank you letter to each person that saved her children's frickin lives. She is damn lucky there were people there who heard themOR.....she will prove she is a piece of s**t, give 'em to gramma.

posted on Jul, 16 2014 @ 10:58 AM
link
When I worked at a casino in Vegas the police said we had permission to smash windows out of any car that had either an animal or a child in it with no parent or owner around.

We had to do it a few times. We would call the police then announce the license plate over the speaker system and when the owner showed up they were placed in cuffs.

posted on Jul, 16 2014 @ 11:08 AM
link
This story is questionable. I've seen multiple new stories now that say the story was misreported and blown out of proprotion.

The mom actually went into a store (with her kids). This was caught on surveillance video. She then came back out to her car, with her kids, and accidentally locked her kids in the car. She ran back into the store to get help right away. Then people busted in to get the kids out, etc. etc.

The story was sensationalized to get the public into a frenzy and get clicks... which has worked.

Here is a "revised" version of the story from the mom and the shopkeepers... 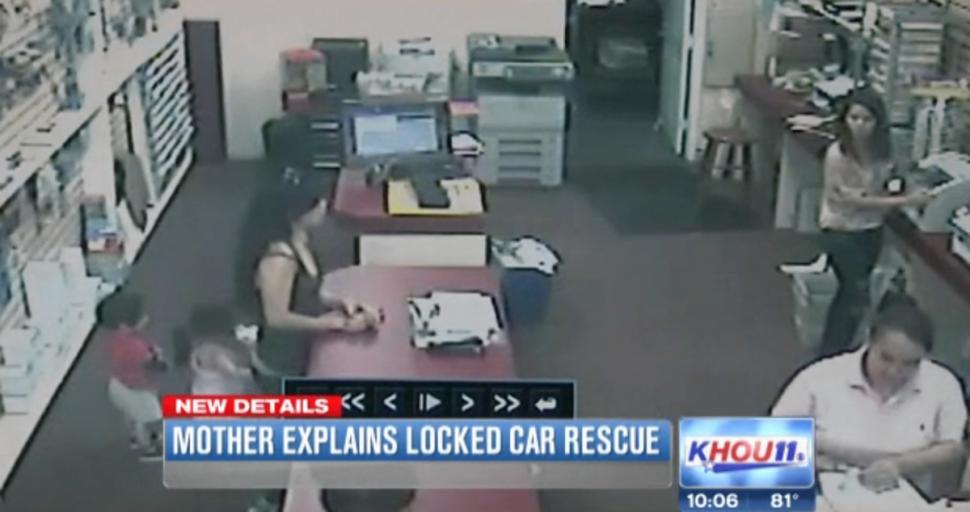 Security video from a Postal+ store in Katy, Tex., reportedly showed the mother shopping at the store before her children became locked in the car.

Two Texas children freed from a hot car by a window-smashing bystander were accidentally locked in the car by their mother, not left behind while she got a haircut, witnesses and the mother now say.

Shopkeepers in the Houston-area strip mall say the unidentified mother was shopping at a postal store with her two children before the Monday afternoon incident, local KHOU-TV reported.

Surveillance video from inside the Postal+ store in Katy showed the mom and her two tykes inside the store at around 5:30 p.m.
"When she finished, she went outside and was putting her kids in the car like normal," Heidy Lopez, a worker at the store, told the station.
"When she was finished putting them in the car seat, I guess that's when it locked and that's when everything happened."
The mother, who has not been identified, told KHOU-TV she accidentally locked herself out of the car.

Surveillance video showed the woman walking into the store moments later without the children and using a phone.

The mom told KHOU-TV she was calling her insurance company for help, but they told her it would take two hours for someone to come and jimmy the lock.

That's when she asked a bystander to smash the window open, she said.

Lopez said the kids were in the car for around five minutes.

"They were OK," Lopez said. "She seemed happy and relieved. She came inside because she wanted to calm down after everything that happened."


This is a really important issue... but in this instance it is bad journalism. I hope crap like this doesn't muddy the waters of how important it is to not leave kids or pets in a car.
edit on 16-7-2014 by VegHead because: spacing issues, and also I am spaced

Nice job on the info / article.

Thank you. ...I know stuff gets "misreported" and usually check other sources.

It amazes me when I see articles like this. On one hand, it is legal to rip your baby from your womb, but you can't lock it in a jeep to die? What is the difference?

Ty for that. Sry all. Mods please close this as it just me look lazy.