A closer look at the IMAX Bigfoot

Found the original and whomever started that rumor is lying. As well as the Bigfoot news article. There is no Caribou climbing the embankment, and there is no camera view from that particular spot. Starts at 8:55 and not 9:20, pans past and cuts to an entire different scene.

Fair enough. But it doesn't really matter. Not a camera man

originally posted by: gortex
According to this Bigfoot website it's a caribou.


Some of the other websites reporting this story are not offering the link to see the complete documentary footage at Hulu.com. If you view it for your self you can see the shape looks the same as the dark shapes of the caribou in the foreground. You can also see it moving in the same galloping rhythm as the surrounding caribou. In fact, after the 9 minute and 20 second mark, (at about 9:22) it turns 90° to its left to go up the hill with the rest of the herd. At that point you can actually make out the caribou head and horns.
www.bigfootlunchclub.com... 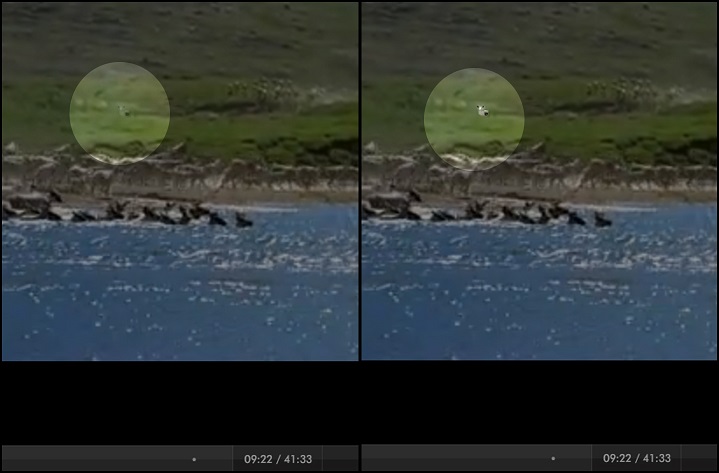 I went to full size and stopped frame by frame the picture above is simply not there.imo.

originally posted by: Words
Definitely looks like a cameraman changing spots on the fly.

One thing for the cameraman idea is that I would personally position someone out in the distance in something that would not ruin my photos, so that they could get shots from the other side, also if it were a BF where did it go, seems into a crevice and stayed there?
EDIT:
Well just watched the longer verson, no reason to station a camera man over there they had helicopter shots.
edit on 12-7-2014 by Char-Lee because: (no reason given)

originally posted by: Clairaudience
The Imax crew said themselves that this was someone from the staff. Why people outright deny that statement is beyond me when they are clearly the ones in the know.

I definitely, without a doubt, believe in the existence of a large primate in NA and Asia, but this is not footage of one.

If they are into wildlife, they may say it was nothing so that hunters will not head out there searching to shoot it. If I were to see one I would never tell anyone.

Same here. I played it back multiples times from the hulu link and never saw what they are referencing there.

originally posted by: FlySolo
a reply to: Clairaudience

Found the original and whomever started that rumor is lying. As well as the Bigfoot news article. There is no Caribou climbing the embankment, and there is no camera view from that particular spot. Starts at 8:55 and not 9:20, pans past and cuts to an entire different scene.

If it is a BF i think he was not chasing the herd, but running to hide, the helicopters was scaring the heard and i think it would have been running for the same reason.

Amazing as to what lengths people will go to lie. They even shopped a caribou into the pic and claimed it's in the original. I'm not really that surprised actually.

Couldn't watch the Hulu link on the Bigfoot site it's blocked to those outside the U.S but just watched the German one you posted and yeah no Caribou .... who'd of thought it , a Bigfoot website falsifying evidence that something isn't Bigfoot.


After watching it a few times it does look like a bloke on a bike.

Moles inserted into every research group. I think someone convinced them and they ate it up without doing their due diligence.

But that would be a highly unlikely scenario. Not everything is a conspiracy and not everything you see on film is as it seems.

Perhaps but it is highly suspicious a research site would claim hoax in their own stuff. It's just weird

originally posted by: Bigburgh
a reply to: Clairaudience

Do have a link.
It was not mentioned in the YT post. Or the comment sections.
The best explanation ( not from a crew member ) was it was a camera man on a bike with a back pack.
Thanks.

That's exactly what I see... someone on a bike wearing a backpack.

originally posted by: Snarl
a reply to: FlySolo

I loved that narrator's analysis.

posted on Jul, 12 2014 @ 06:53 PM
link
Sped up and zoomed in it looks like a guy on a mountain bike and he's a lot closer to the camera than the caribou climbing the embankment so the size comparison is off.

I tried to watch it with a bike in mind, I can't see it. But I do see something hop up and catch a ride even more than before.

posted on Jul, 12 2014 @ 08:02 PM
link
a reply to: trollz
it really reminds me of a primate dragging its knuckles as it moves while trying to stay low. there is also a nice reflection that comes off its back in one frame that looks a lot like fur reflecting light. I wish we could see the stock footage cause I bet u can see everything u need to know to come to a conclusive decision on what it is
Edit: Ok it does also look a lot like someone peddling a bicycle. id say we need the stock footage otherwise its pointless to keep guessing