posted on Jun, 23 2014 @ 10:57 AM
link
On Wednesday my wife finds this stray cat behind the hospital where she works.
This scraggly little thing was clearly abandoned as she had the remains of a collar, no tags, and her fur was so matted it felt like she had a tortoise shell on her back.

Well given her condition the wife instantly caves and brings her home.
that momma cat fell instantly in love with our girls too!

But as for me... We have this disagreement over who gets the old leather recliner and control of the TV remote...
As you can see she was very vocal in her argument. 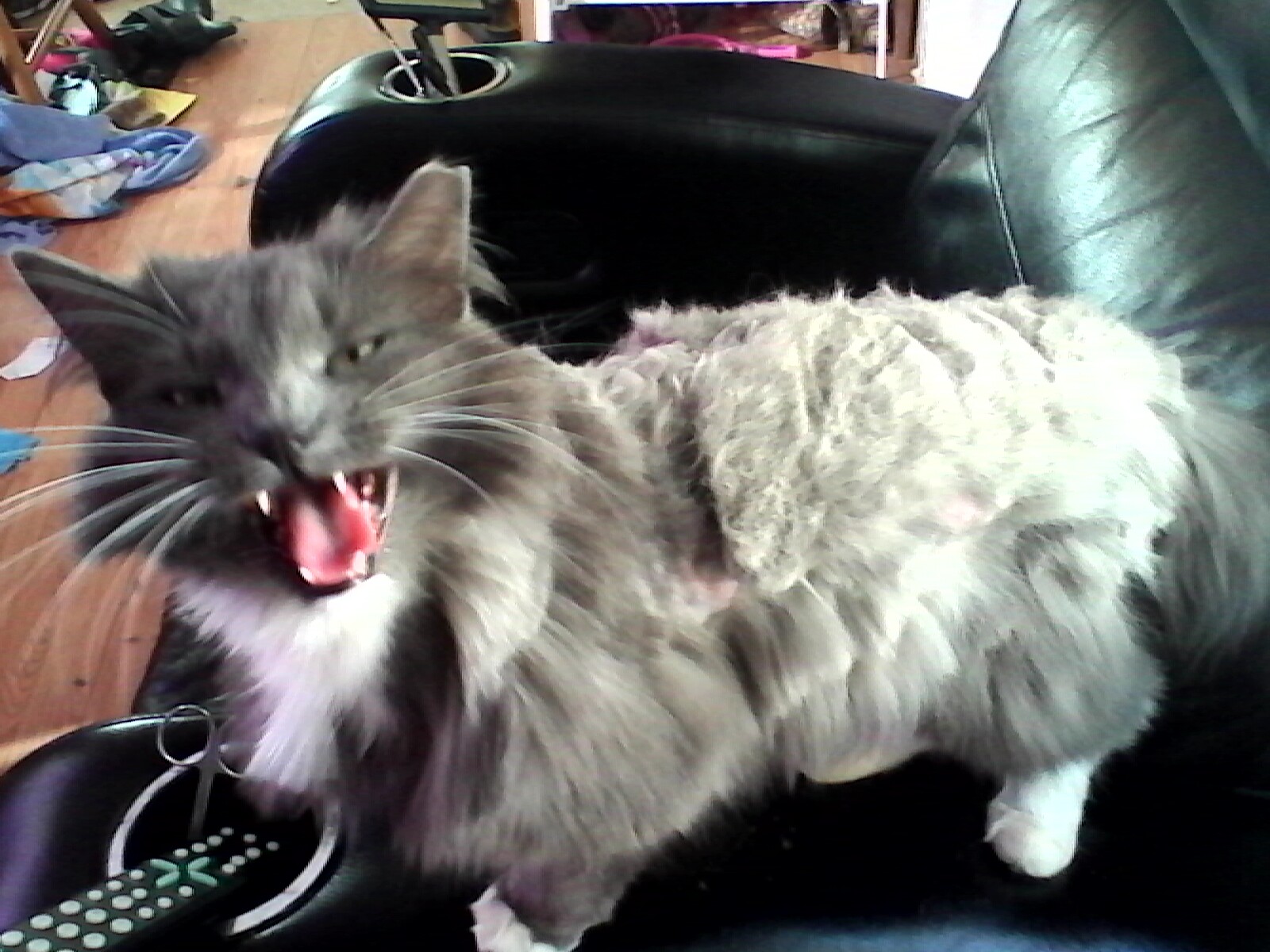 D-Yam she has sharp claws too!

I love cats! How's the matted fur situation going? Has the furry fury been shorn of the nastier bits yet?

Once I had a girlfriend like that and well let's just say it didn't end well.

(good luck with the crazy cat.)

All better now.
Took her in to the Vets, they also have a groomer there.

Some of the matting was so bad it was literally tearing her skin!
I've never seen it that bad on any animal before. Must be due to her being a long haired breed?
she's very under weight.

We did learn she'd been fixed though...

Did you notice in the picture she has a clipped left ear?

well the vet tells us the local humane Assoc. have a trap and release program.
they catch strays, have them fixed then release them back where they found em.

the way they know which cats they already fixed is by clipping their ears like this...

They clip a bit out of their ears?

The hell with that! Life's hard enough for a street cat!

As a cat owner of a very adorable but eccentric cat, let me just advice you to buy another couch for yourself, or find another place to sit.

I think we both know how this would end. You with more scratches, and the missus angry at you for upsetting poor putty cat.

Our cat has this one pillow she doesn't let me use. I just gave it to her.
Cats are territorial like that.
I'm not saying she's the boss, but well, yeah.

Ps: S&F for giving my husband and I a good chuckle.
I'm also glad to read that she is doing fine now.

Cool story, and way to help a cat in need

posted on Jun, 23 2014 @ 02:08 PM
link
a reply to: HardCorps
If a cat ever even looked at me sideways in my own home, I'd let it know it's place on the food chain.
My dogs I would slack just a bit though, I know dogs are capable of love.
Just not a cat person I guess.
My dogs on the other hand LOVE cat!

posted on Jun, 23 2014 @ 02:27 PM
link
Congrats on the recovering feral. We have one of those in our home. She makes our relatives and friends look at her a little sideways. They think she's a bit mean, but they just don't know her. She has her rules, and once you learn her, she's perfectly agreeable and actually quite nice, just don't expect her to be a cuddly, lovey kitty.

I love anything with more legs than I have, and I can tell you without a shadow of a doubt, that cats are capable of loving their owners, and indeed, their owners friends. Cats, however, are more sophisticated, in that they choose who they want to be friends with, whereas dogs, by and large, are cool with anyone who is cool with them.

I have yet to meet a cat that did not like me, or a cat I did not like. I sit down in a room, and ordinarily speaking, if a cat is in the house, it will end up in my lap inside of three minutes from the time my buttocks hit the upholstery. The only exception to that rule, is exceptionally distrustful cats, those which have had tough pasts. I can understand that.

It's the same with many animals, but cats particularly, if they have been deeply traumatised, it is very difficult for them to readjust to more than one person in their lives.

posted on Jun, 23 2014 @ 03:28 PM
link
a reply to: TrueBrit
I actually understand, my Dad and Brother are the same way with any animal 4 legged on winged.
I'm just not a feline person, dogs love unconditionally.

AWE!!! How can you resist that face though?

How sweet of you to take this kitty in.

She looks like she has a beautiful coat when not all matted.

I have a Persian and she has an insane amount of hair. We give her a lion's cut once a year in the summer. She looks so cute and like a tiny little lion walking around the house.

originally posted by: TrueBrit
a reply to: g146541

I love anything with more legs than I have *snipped*

I want to test you. Give this little fella a cuddle.

Well, if we are going armoured exoskeleton carrying critters, then I prefer spiders. I used to have a wolf spider running free in my bedroom when I was a kid. When I sat down to use my Amiga 600 computer, it would sometimes drop down on a web line from the ceiling, and just sit next to the mouse, and turn to look at me, and then the screen, and then me again.

Sometimes I used to catch flies, and throw them at its web. I woke up with it on my nose once, and I laughed so hard! It REALLY tickled my nose!

Ach! *shudders* Pet spiders? Even worse. I'm terribly ashamed to admit this, but I'm a 37 year old man, and I actually had to call my mum (mummy in this case) to come down to my house (40 minute trip) to help me get rid of my last huntsman spider.... *hands in testicles* I am terrified of them. Back when I had full mobility and I had to deal with one, I squashed it with a broom. I thought it was dead, then all of a sudden it charged at me fangs dripping (in my head) and squirmy legs wildly charging towards me at a thousand miles an hour. I freaked out and jumped backwards, dropping the broom which then broke a key of my keyboard. The spider ran down beneath my bed.
I had to spend the entire night awake in the lounge from terror.. Can't stand them... Now it's even worse because I'm in a wheelchair, so I cant run away fast enough, nor dodge left/right, so I feel frozen when I see one, hence the need for mummy. I need help. *sucks thumb rocking in corner*

Neat cat by the way and well done op! I'd name her Scrabbley-Anne.

posted on Jun, 24 2014 @ 06:30 AM
link
Kudos for saving this beautiful kitty!!!!! It will need regular grooming sessions. I have owned long haired cats and you just can't get away with it. If not daily, at least once a week. If the cat won't allow you, just take it to be groomed by a professional. So happy the cat was rescued.

posted on Jun, 24 2014 @ 06:31 AM
link
Oh forgot to say that they sell awesome detangler conditioners for long haired cats that work really well.

I had an eight legged friend too.
We met while I was taking a roadside pee break...
if you look closely you can see him standing in the shadow of the bike. 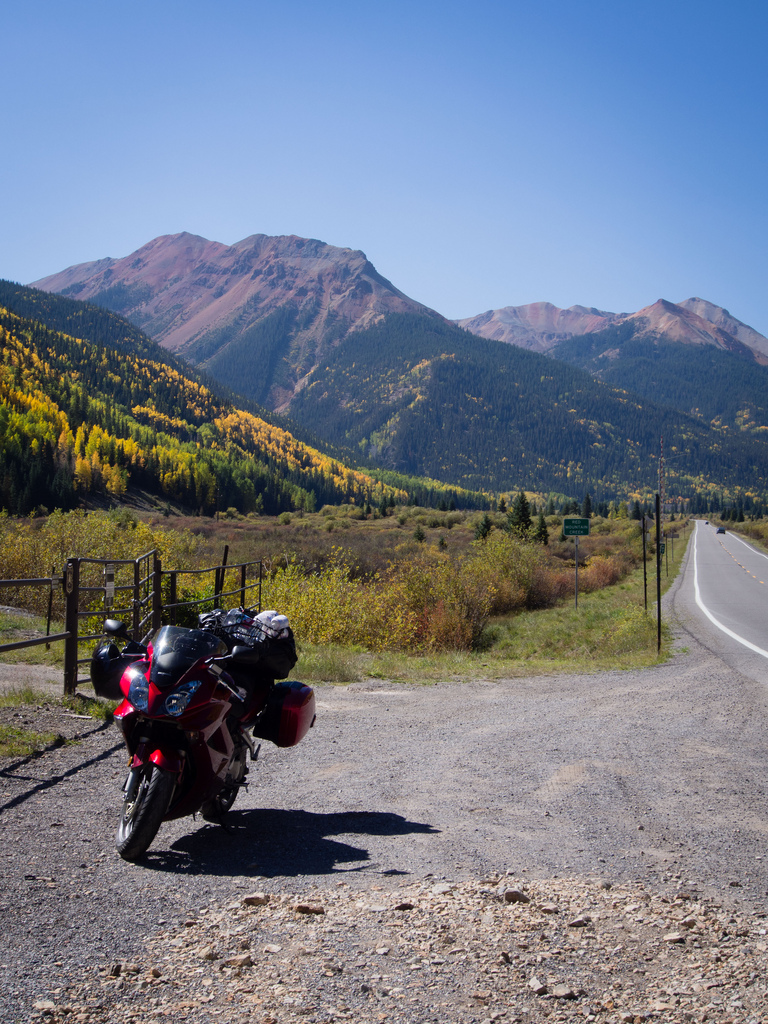 Still don't him him???
Maybe I can get a better picture 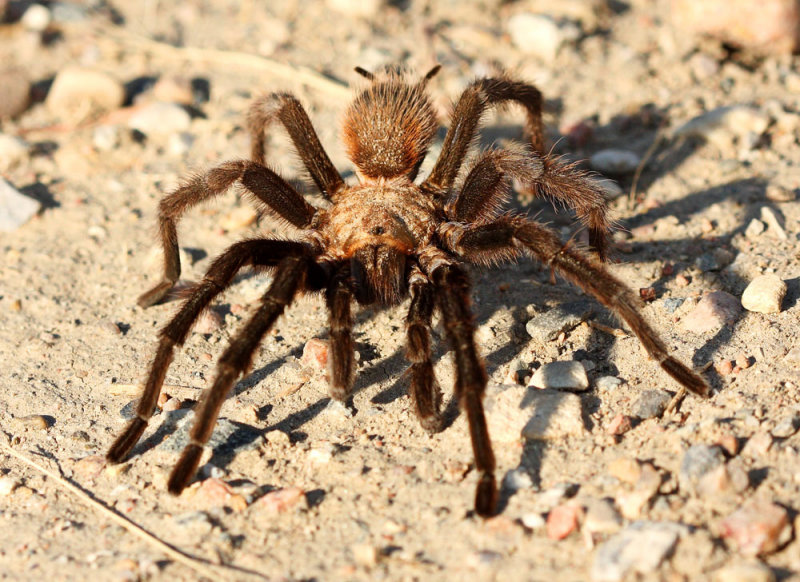 Last Fall, early October--- the wife and I made a trip from Wichita to here in Colorado to sign the closing papers for our new home.

On the way back to Kansas to pack up and make that final move we found this little guy.... we also found several hundred of his brothers...

After passing Walsenburg CO, before La Junta along Route 10 heading east into KS. we saw thousands of these little guys crossing the road. It was kind of gross as we were following this mini-van and as they drove over one... it would flip up into the air right at us!

One who must have been flipped up unto the bike ended up in the saddle Bags and we didn't know he was there until we get to Garden City!

The wife screamed when she see's it.
Me I'm all like, lets take him home to show the girls.

My wife not liking that idea one little bit puts her foot down... 'Literally'.... and smashed our hitch hiking stowaway!
Poor little guy didn't have a chance.

Guess there are limits to her love of our little animal friends uha?

posted on Jun, 24 2014 @ 12:03 PM
link
So what did you name her? As some else posted there are detangeling products or baby hair conditioner. Just spray on after her bath (which usually takes 2 people LOL) but always remember:
Dogs have masters
Cats have staff

We names her 'Stormy'

seems this stray only ever came out of hiding on stormy days.
on the day the wife took her home we had a horrible windstorm here.