posted on Jun, 17 2014 @ 07:50 AM
link
It seems with all that's going on in the world today, our minds have a lot to process. I think this is just one way my subconscious is working out the things I've seen and read over the past couple of months. I found it interesting so I thought I'd share.

My dream starts off with a lot of action going on from the get go. I'm in the middle of suburbia with a ton of fighting, there are obviously two sides. The one I'm on and our enemies wearing tan or brown unmarked uniforms. But they're American, like me. I realize this is a civil war, and from the looks of my surroundings it's been going on for quite some time.

Everything is layered in dust, my dream took place in Georgia yet it reminded me of Arizona. Trees were dead, grass too, and there was sand everywhere. It was hot, really hot. It's strange as the fighting happened on a street I lived for many years from the mid/late 90's up until the early 00's. So naturally, it was a bit surreal.

All of a sudden, a guy from behind is yelling that he got word that "we got the leader!". Just like your typical dream, I was transported to another area with a lot of commotion going on. People yelling, our side had captured the other sides main leader. He was beaten, bruised and bloody with his hands tied behind his back.

Some people on our side were wanting to kill him, obviously this man did a lot of bad things to others. I dare say many were feverish after seeing his blood run. Then again, some others on our side wanted to spare his life and an argument ensued amongst us. All of a sudden, those for killing this leader had enough and picked the guy up and placed him in a shallow grave, one of our guys took out a large knife and looked at another. Those against the killing were yelling, "Don't do it!".

The guy holding the knife looks down at the guy and quickly pulls the knife across the leaders throat. Angry screaming and joyous holler mixed in the air as you could hear the oppositions leader gurgle in his own blood. I stood there frozen, looking at his face. A small fight breaks out behind me, I turn to look.

That's when I hear a voice (that gives me the goosebumps just thinking about) in a deep, dark tone unlike any voice I have heard say, "Give me the toilette paper BOY. I'm going to wipe my *** before I slaughter you all". I turn and see the dead leader stand up, clothes bloodstained and the most horrible, angry grimace I could imagine on his face.

I was so frightened in my dream that I woke up. I don't have many nightmares, mostly just dreams revolving around stress. Not sure why I'm posting, as I don't think it was any form of prediction. I guess I just wanted to share. I did start to think afterwards that maybe we're heading towards a tipping point in humanity.

That our choices in my dream was societies choice to war and kill, and the dead leader coming back as some monster the repercussions of our actions against ourselves.

Thanks for taking the time to read.

posted on Jun, 17 2014 @ 07:59 AM
link
Goddamn! I don't know how anyone could follow that act. I post here only to say that I see you have gotten four flags and four stars but no replies.

I too, am at a loss for words. 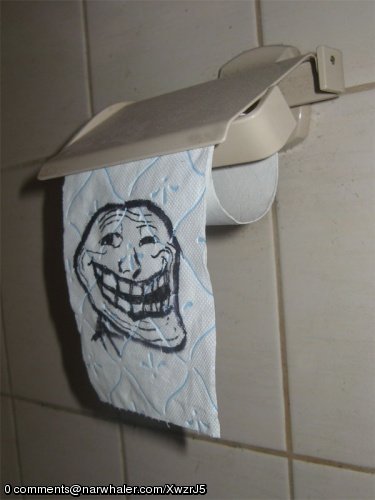 I trust you gave him some toilet paper.

Screw the toilette paper, more like nope.jpg all the way home.

I appreciate the flags and such, but that's not why I posted it. I guess "deep down inside" I was hoping someone was able to give me an insight to why I dreamed the dream. I figure I've already answered that myself, just my mind working things out. But the last part with the leader coming back to life and the voice with the face was truly unsettling.

Thanks for your reply MikeG.

posted on Jun, 17 2014 @ 11:32 AM
link
If you watch Supernatural at all. I do carefully. First notice alot of occult information, parallels with our leadership, corporations and world, in it. Not that heaven and the angels are like that but that maybe that is a code for black ops and their inner gangster style fighting or the ets and their inner gangster type fighting on lower levels.

But, the thing about demons and crowley the head of them, and then the leviathin. Related to in my opinion, the levites in the bible, the group under moses that slaughtered many and their own families that strayed from their religion, so a murder sect amongst the priests and leaders. Well leviathin control all the corporations, walmart is mentioned, big pharma, and our food industry, and they possess or duplicate (clone? there is cloning technology and a lot of media stars sing about it), and run this world. They are the original evil group of regenades, beast symbolically, bigger and meaner than the demons.

Well, I would say that any of the main leaders in a civil war or any kind of war, or leading any country is probably leviathin.

So when he was killed that just freed the monster.

As soon as I noticed the codes and info in the show, started watching it, but there are rituals done it, with spells and a whole bunch of things that need to be firmly renounced and denounced, and recognized as an attempt to cast spells on the viewers, at least that danger remains.

So from a research point of view, and trying to analyze the metaphors, ie Els usually are ETs, but are ETs Els or spirit entity some of the time at least?

Don't like boxes so won't step into a box but instead just list a bunch of possibilities. I choose beliefs when it comes to my own experiences, but try to analyze this other stuff.

With these current events, was this civil war anything like ISIS type divisions .

I had a dream a while back that was more like the ISIS type mercenaries killing everyone and just became lucid and refused to participate in the dream since it was apparent that the ordinary folk, families and elderly couples couldn't fight back and chairs didn't cut it in warding off the attackers. And then it was apparent a Female Guide was giving me the dream and was informed that unlike the movies, this is the real way it would happen. A small weaponized group of thugs can kill a large number of unarmed people, especially those not trained in combat.

That people need weapons and even perhaps training, but at the same time, not any government civilian army type training, just local area, community defense type thing, free from government ideologies.
edit on 17-6-2014 by Unity_99 because: (no reason given)

posted on Jun, 17 2014 @ 11:40 AM
link
I would say that one of my big theories is, that we are probably already run by these monsters either possessing humans or clones made to host them, all the leaders and corporate heads, or most of them, and military and just a good percent, maybe even 5-10%.

posted on Jun, 18 2014 @ 09:05 AM
link
I've had a strange one myself lately that has just stayed with me all week. I don't know I've just had this uneasy feeling all week. I'm a worrier by nature so maybe just stress and such. Usually I'll forget a dream after a few hours but sometime they stay with me for a few days or more.

posted on Jun, 18 2014 @ 10:09 AM
link
It seems you are in a stressful environment. Do you have a bad boss at work that everybody hates? Dreams are nothing more than a mind play to resolve issues while awake. Often times , bad dreams are an omen of something good coming your way.

posted on Sep, 13 2014 @ 01:23 PM
link
Well they say when you die that you empty your bowels, so maybe that explains why the first thing on his mind after resurrecting was some damn TP. I mean, yeah, he really badly wanted to kick some ass, supernatural zombie style, but first thing's first, ya know...

I remember reading this when you first posted it, but I guess sometimes it takes me a while to think of something to say. Actually I was linked here from your more recent dream thread, but I guess it will take a while before I think up a reply for that one, too...

Hey, sorry for not replying sooner. Thanks for dropping by at least. Appreciate all comments!

That is an intense dream!

Once had a dream that I was a vampire and drank peoples blood, from their necks. It was so disturbing and I had the taste in my mouth the whole following day, so gross.