If something is just beyond the headlights (or even too close) between your periods of looking forward, it can be laying in the middle of the road and you not see it.

I understand you search point but the person would have been in the headlight range most of the time. It wasn't 100s of feet. If the officer looked at the road once in all that time he should have seen him. Isn't a driver required to check the road.

It's an accident but I think it could have been avoided.
edit on 6/15/2014 by roadgravel because: typo

originally posted by: roadgravel
Isn't a driver required to check the road.


Yeah they are, but police are bad about keeping their eyes on the road when they use those patrol car laptops. Since he as driving slowly, late at night, and not expecting someone to be laying in the road, I can see where this would happen. Not saying its a good thing, but I am sure it was an accident.
edit on 6/15/2014 by defcon5 because: (no reason given)

posted on Jun, 15 2014 @ 11:05 PM
link
Another thing. All the cops I've ever known tend to be picky about their cars. They get stuck with those cars for up to 10 years, and they spend most of their day in them. Besides being their transportation, they are also their office on wheels. So with that in mind, I'm pretty sure that none of them are going to intentionally use their car to run people over.

Lol seriously? Didn't see him??
It's called looking where you are driving. As long as he had his head lights on he should have seen him far before that first stop. Unless of course he was just not paying attention.
Won't say he did it on purpose but it seems like a huge mistake that deserves to be dealt with.
If I did that I am sure I would be facing at least a license suspension

posted on Jun, 15 2014 @ 11:59 PM
link
I also have a problem with him continuing to drive. Sure we only see a limited view after the guy gets ran over but it is clear the cop drove some more. Who does that?
That was quite a bumb, why not get out of your car and see what the hell just happened. Cause it seems the guy was stuck under the car so how ever far that car went further, it might have been causing more injury to the fellow that got ran over


I think you hit on what struck me the most, right from the first viewing. He didn't stop when the front of the car went over the guy, and he didn't fully stop for another few car lengths down the street. Whatever happened up to that point? I don't know...but that point on? Yikes...

Was there some sort of unofficial competition for

posted on Jun, 16 2014 @ 01:32 AM
link
Rather curious why he was laying in the street to begin with ??? Signal rubbish at moment so cant view the video .. something more than the guy getting ran over sounds off about this ...

Honestly looked like he had a hard night of drinking, but honestly that is just the first thought that popped up in my mind.
He just looks passed out on the street

Ha ha ,looks like a insect in the video .

Thats possible .. had been wondering if he'd possibly had a siezure or heart attack that caused him to end up laying in the street ..

posted on Jun, 16 2014 @ 02:26 AM
link
a reply to: Sremmos80
First off it takes more then a second for the signal to go from your brain to your foot to remove it from the accelerator and hit the breaks. That is why they require you drive so many car lengths behind another car according to how many miles per hour you are traveling. When you add a fraction of a second of surprised shock, its going to take even a bit longer.

Secondly, if you have ever unexpectedly driven over something substantial in size, the car jumps, which means the accelerator is going to come up against your foot due to inertia, and you're going to get a surge of power before you can react an remove your foot.

From first contact the officer drives for almost 6 more seconds....
Given your 1 second delay, which seems very long btw, that still doesn't account for the almost 3 seconds AFTER the second contact with the body.
After the first MAJOR bump, the brakes should be applied, or at the very least the accelerator not hit again, doesn't seem to be the case. The first bump would surely throw your foot off the pedal as well as your body will move up with the car.
So again, the major malfunction with this officer is his driving skills apparently. The man should have never been hit in the first place
This guy needs to be on leave and have his license suspended, I don't care what your are doing, when you are driving a car, it is a weapon and needs to be treated as such. I bet you heard that countless times when you went thru driving lessons. He was not paying attention and a man is in critical condition cause of it.

Again, what would the outcome be for the joe citizen that ran over a man in the street be

There is no way in the world a cop going along a road at 20 ks an hour, stopping frequently, could not see a bloke lying on the road 50-100 metres ahead of him.


The Three Stages of Braking

Bringing a car to a stop requires three actions to occur:
1.Your brain must recognize the need to brake. This can take a heck of a lot longer for a new driver than an experienced driver. New drivers simply don’t have the experience to recognize when the cars in front of them are slowing down. An alert driver may make this decision in 3/4 of a second. A new driver may take up to two seconds.
2.You must move your foot into braking position. This may require moving your foot from the accelerator to the brake. This takes the average driver 3/4 of a second.
3.Finally, you must apply pressure to the brake.

During the time in which your teen is deciding to brake and moving their foot to the pedal, their car is continuing at the same speed toward the car in front of it.

Check out the chart below which illustrates just how far the car travels during these stages of braking. 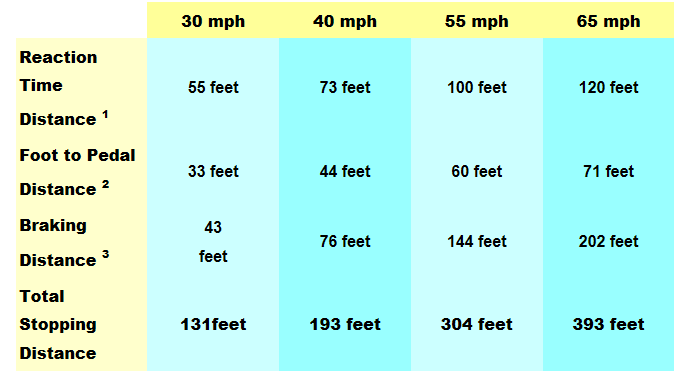 
Now add being startled/shocked into the mix, and you will get an even longer delay and greater distance before stopping. Additionally some of your 6 seconds is past when he had run him over, and where he was pulling his car to the side and getting out.

posted on Jun, 16 2014 @ 05:28 AM
link
There is a lot being overlooked here in the rush to blame the cop for doing something wrong. I drive a couple hundred thousand miles a year, and there are times I've run something over and gone "wtf was that".

1. What time of day was it? There are periods where your body is naturally going to react slower to things. There are things you can do to help it, but it's a natural reaction.

2. What is his shift schedule? If he was just coming back from days off, or was just about to have days off, then he's subconsciously going to be a little slower.

3. What were his sleep patterns like recently? If there was something going on outside work and he didn't sleep well then he's going to react slower. I have days when i have to stop for a nap because the night before I didn't sleep for crap.

Instead of rushing to judgment, maybe we should be looking at those questions with an open mind. I know it's cool to blame the cops, but they're people too, and are subject to the same laws of biology we are.

if that's the case(distracted by the computer), then he should be brought up on charges, the same way any of us would be, if we ran someone over, because we were texting, or fiddling with our phone while driving.

there are actually laws on the books to deal with driver distractions.

badges do not make you immune to the law.

There are a lot of excuses being made here, in a rush to create excuses for this cop. Apparently, some here find that it helps their case when they claim that anyone and everyone asking questions is "rushing to judgment" because it is "cool to blame cops". This is technique used to ostracize those who demand accountability, nothing more...so please, stop pretending to know my intentions or the intentions of any other person asking questions about this incident, or any other for that matter. That being said, I will agree that there are those that find it "cool" to blame the cops for anything and everything they can. I'm not that guy, but I do demand they be held accountable, the same as average Joe Citizen would be.

Apparently, that isn't the case here. That...I have a problem with.

I am sure that I could use the excuses you listed had I ran this guy over in the street. I am sure it would sit real well with the judge when I explain, "well your honor, I was sleepy you see....the kids, they've been driving me nuts and the wife just won't quit nagging so I hadn't slept in days and on top of that I had a few days off and just wasn't on top of my game that night....it won't happen again"....

Yeah, I'm sure that would fly

Instead of rushing to excuse this cop of what is, at the very least, negligence...maybe we could look at the questions posed with an open mind. Seems that a few just want to excuse the behavior of any cop because cops do no wrong. I'm positive there is a crowd where such a "thing" is also "cool".

I shed those rose colored glasses about cops a long time ago. Is this cop a "bad guy"? I don't know. More than likely he is just incompetent, especially in the driving area or life....maybe he needs a desk job if he cannot multi-task any better than what is displayed, for all to see, in the surveillance footage.