I was looking fore some new Info or News. When i Found this video.


I haven't seen the video to finish yet. But what i have seen so far. I wanted to post this ASAP!

2014.6.1 (AE) - The mystery of why no lawsuits have been filed by the parents of the Sandy Hook Massacre is because the only known attempt was met by death threats... yes, death threats to the parents via their lawyer.

The Connecticut state "Gatekeeper", Claims Commissioner Paul Vance Jr., could not allow ANY lawsuits whatsoever to be brought forth... lawsuits allow discovery, the collection and freezing of the evidence, and this would expose the tremendous number of problems with the official Sandy Hook narrative.

The following video reviews the only attempt at launching a legal case, the immediate attacks on the lawyer, who would not disclose his client's name, and the clear warning sent out to all lawyers by the Connecticut Trial Lawyers Association (CTLA).


Also if some dont remember this. The only lawsuit we ever had heard of was the one on 100mill vs the State of Connecticut..


If you dont know Who this guy is below. You dont have seen the video yet.

He is importent fore the lawsuit, and the Big ? About the whole lawsuit. Also is brother to another familier face of the sandy hooks CT 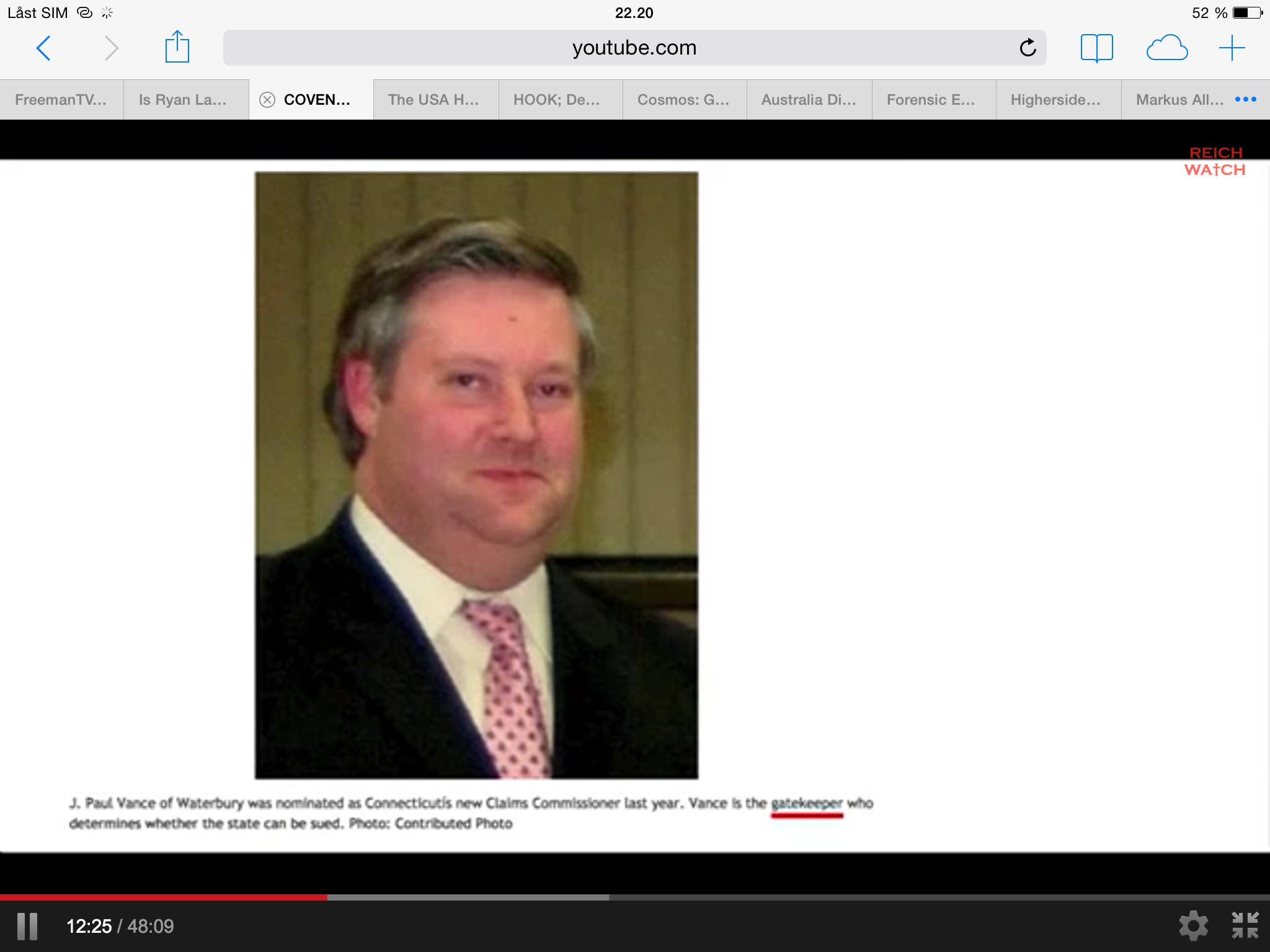 If anybody recall. The tapes of Adam Calling to a radio station. About a chimp.. This Will might Connect a dot or two. 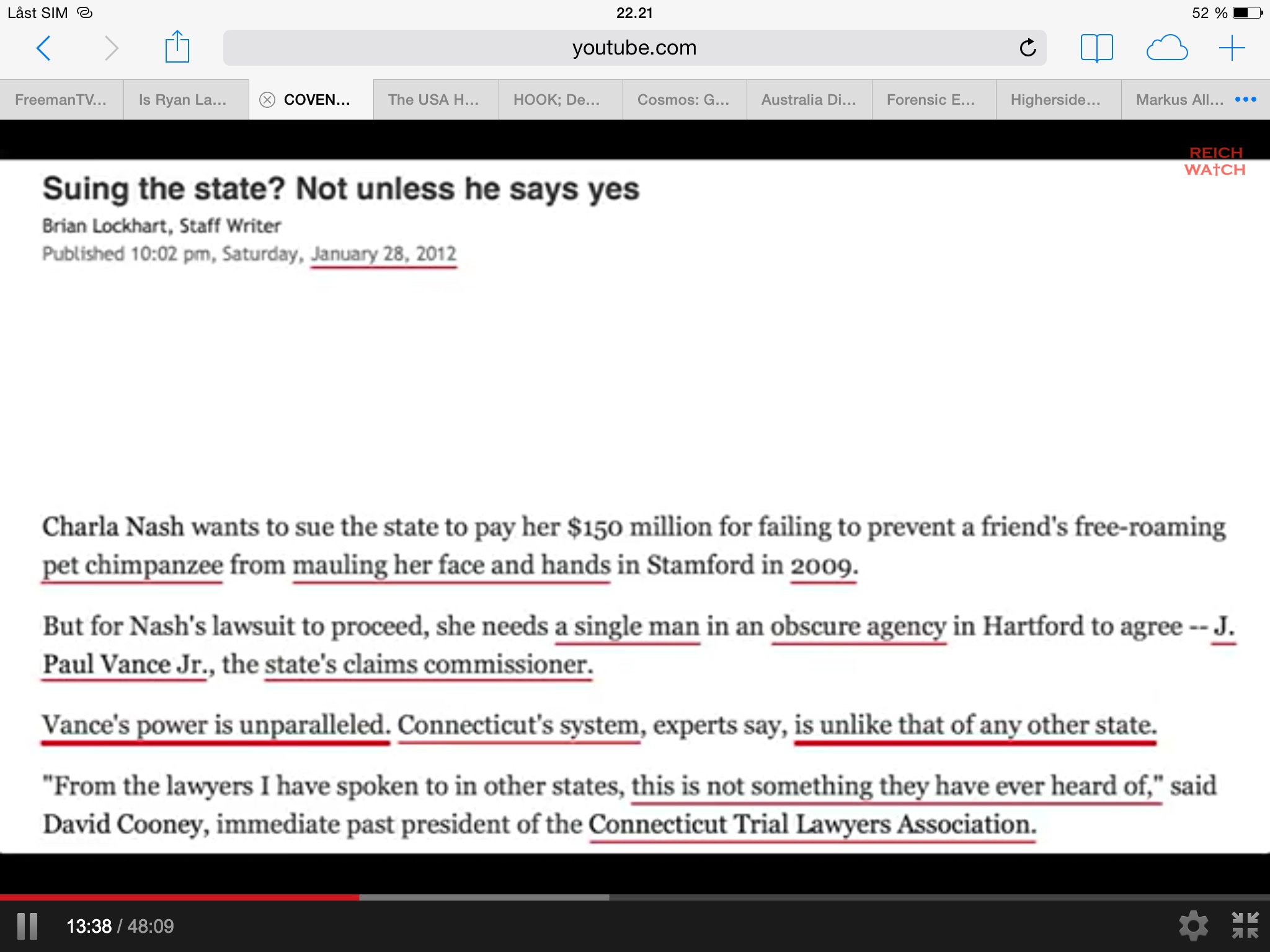 It seems like CT is Playing by rules that are not seen in any other State... 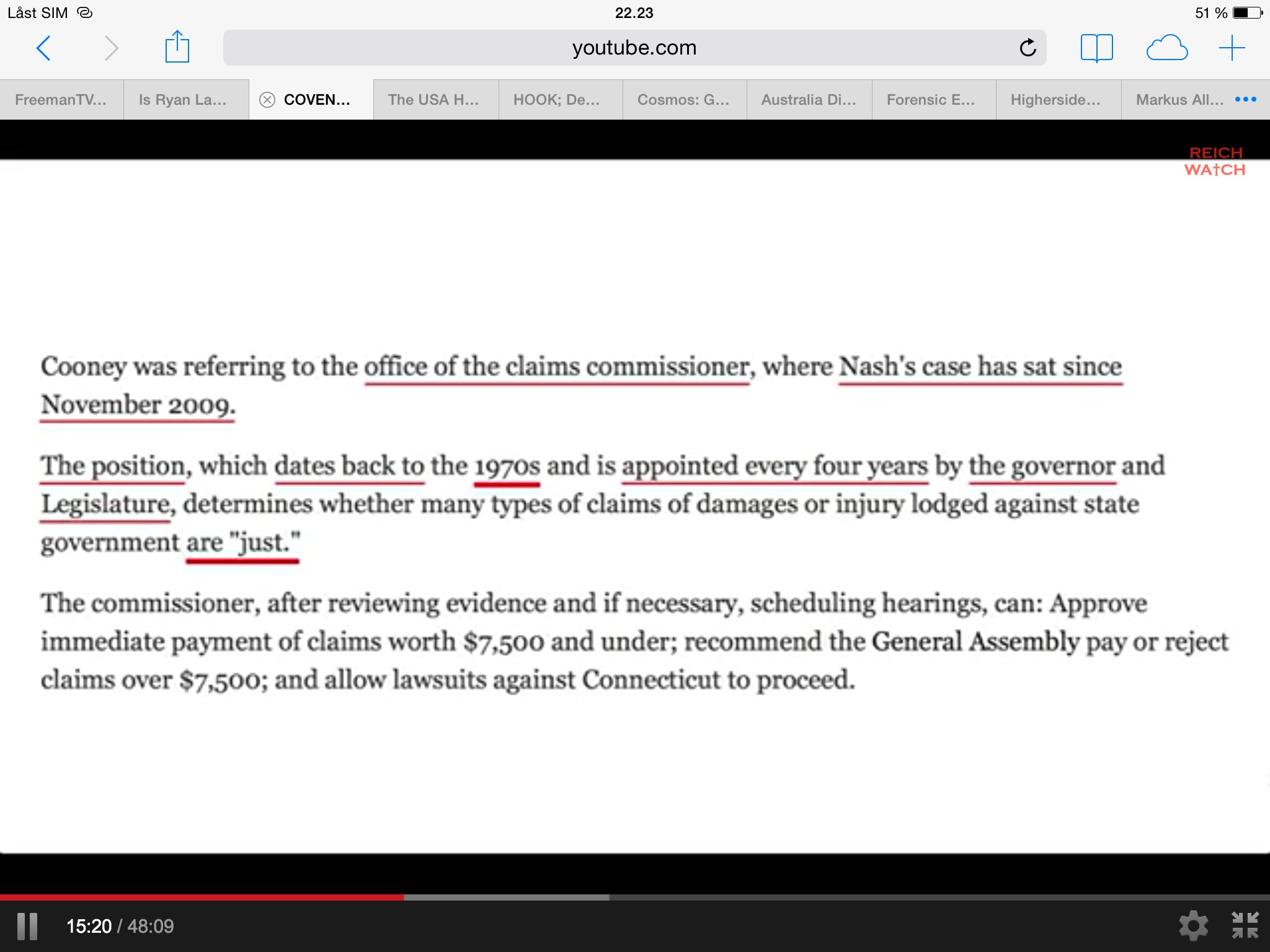 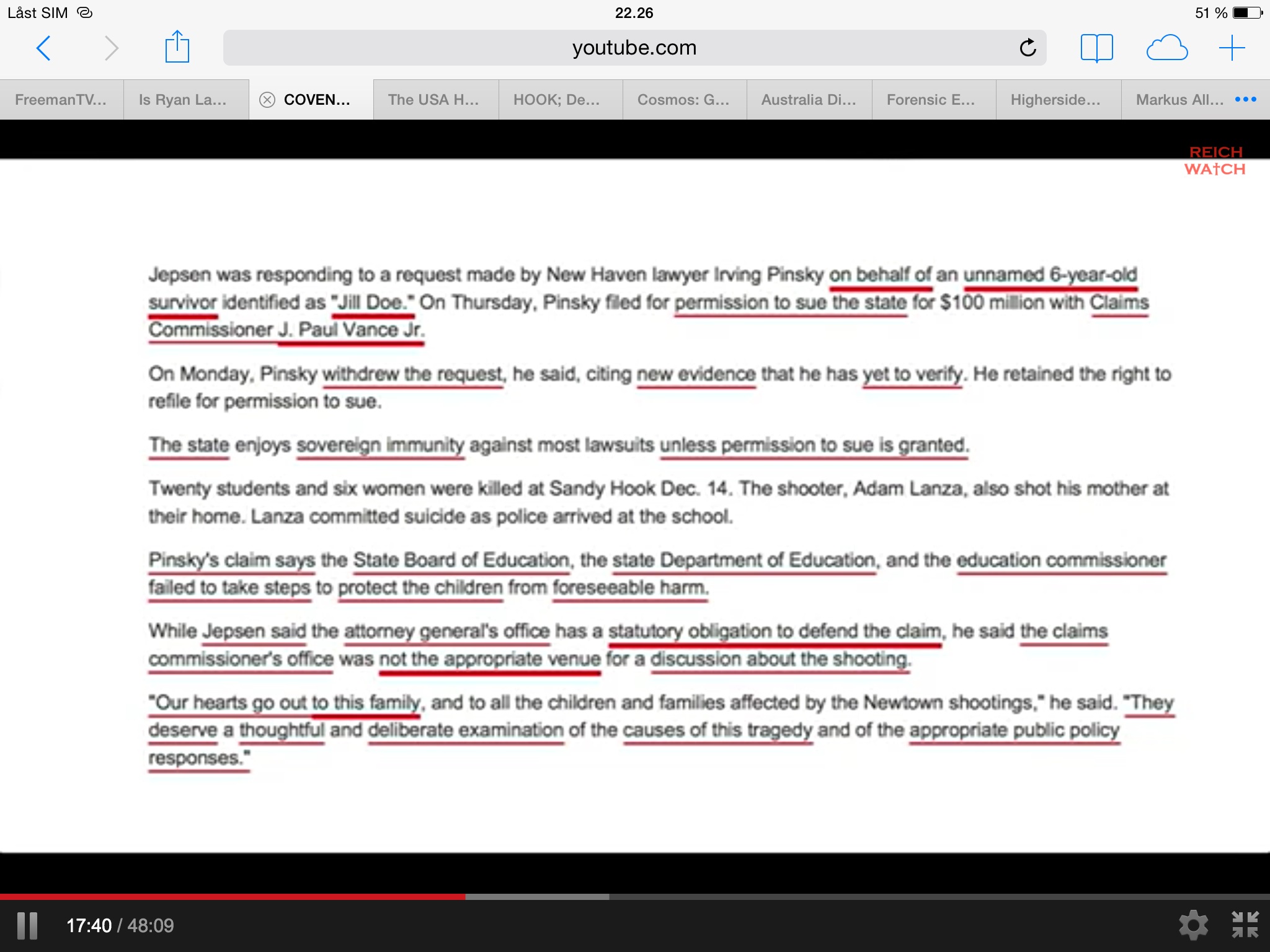 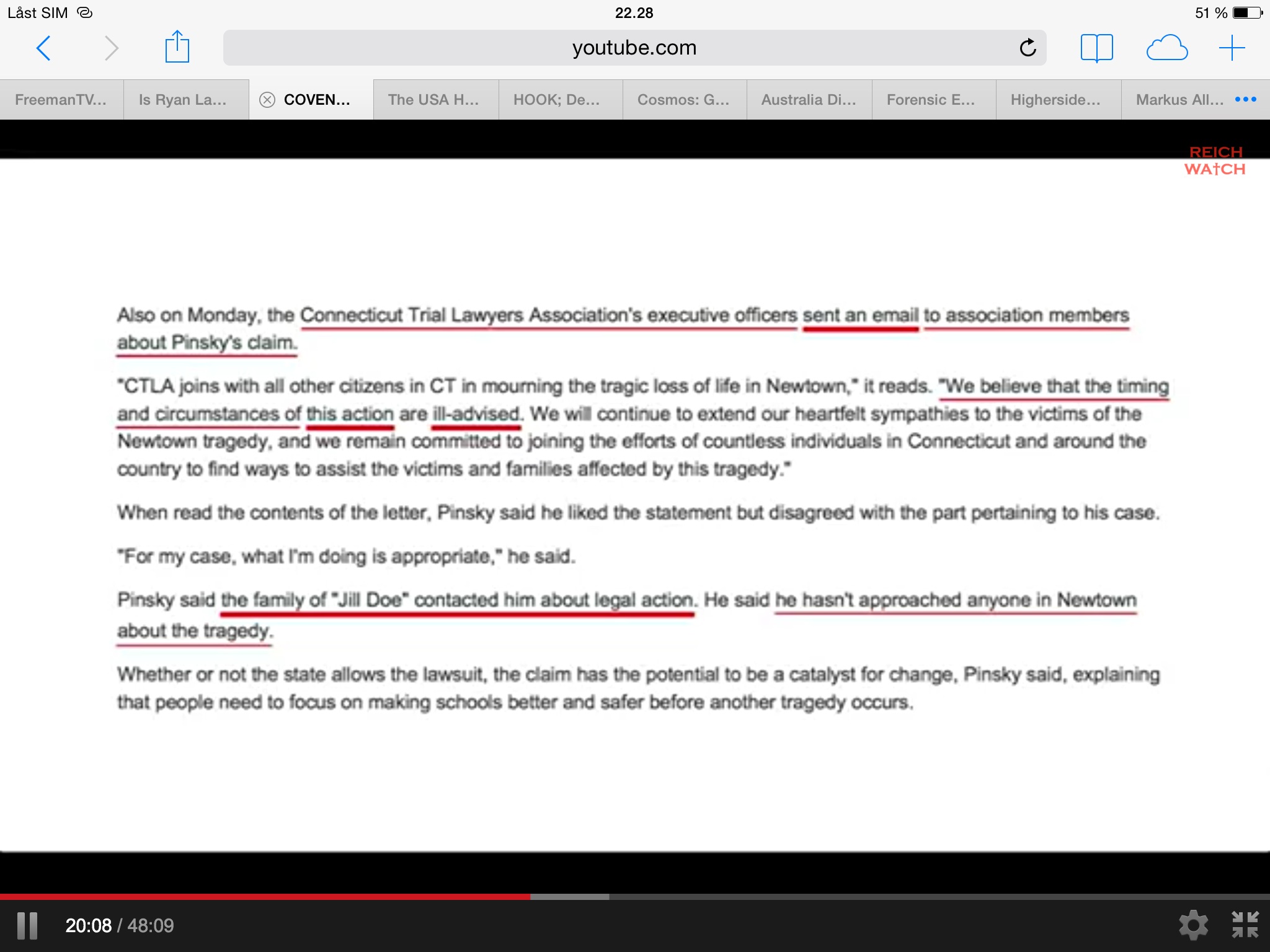 I find this whole sandy hooks case crazy. I dont wanna say if this was a Real shooting or not.

But if we take the video as true. There was a shooting. And a family having a survived Girl. Then the family took contact to a lawyer. Who then tried to Apply fore a lawsuit. But the lawyer took the Apply back.

I dont know if this whole case about the lawyer is a misled. But then again this is the first time i ever heard about this and Its a really bizar story...

Interesting what this poster said


What a fantastic video, loved it Aryan! I always wondered how his long time paralegal (worked for him over 20 years) died about 9 months after SH, but never found the reason of death. Keep up the great work! www.legacy.com...﻿

What are the odds of the only tape of Adam. ( if i Think correctly only tape of his Voice ) Is about that case with the chimp....

I will look on the other videos from aryanEmpires a really good job he has done. ( also a Big thanks too Aryan on his work on the sandy hook Conspiracy )

Points from the video;

So the shooting starting before 9.35!

Their are more odd things. Also alot of the callers. Said they heard screaming from the School about: ambulance... So they come to the School and Call fore ambulance.

I Thougth the School was not close by other houses. So how did they hear the screams? Or was it by the boArdcast / sms text they knew it by....

posted on Jun, 2 2014 @ 06:49 PM
link
I wont say too much, but from what I have been able to gather, what we are told happened is not what happened. There WAS as least two shooters.

Adam Lanza didn't write the note to his mom. His DNA or fingerprints were not on the letter, nor on the outside of the car that he apparently drove to the school.

I feel horrible about the loss of life that happened that day, and therefore I feel it is our duty to try and get to the bottom of this.

originally posted by: andr3w68
I wont say too much, but from what I have been able to gather, what we are told happened is not what happened. There WAS as least two shooters.

Adam Lanza didn't write the note to his mom. His DNA or fingerprints were not on the letter, nor on the outside of the car that he apparently drove to the school.

I feel horrible about the loss of life that happened that day, and therefore I feel it is our duty to try and get to the bottom of this.

If he was that socially backward, how did he have the self-confidence to drive a car?

There is a thread with the forensic evidence on ATS....

posted on Jun, 3 2014 @ 09:21 AM
link
While the anti gun crowd has pushed for some lawsuits to be filed so that the case remains fresh in peoples minds the idea of profiting of the deaths has proven to be distaseful to most of the families. I would expect as time passes some will be filed. However in most past cases they tend to be dimissed so even then they may be wasing time. It would be great way to keep it in the public eye though. And if everybody was in on it as the theory goes then lawsuits would be no problem and great way to push an anti gun agenda. If of course you believe that nonsense.

SANDY HOOK COVENANT; Rick Thorne Yelled 'PUT THE GUN DOWN!!' Myth Vs. 'I SAW NOBODY' Reality

By the same researcher, and he is very thorough. Just follows link after link and comparisons.

But what caught my attention was starting at 7 24 the actual interview with the custodian, the janitor basically.

These words contradicted the popular story where he said, drop your gun to Lanza. Instead he didn't really see anything but heard the shooting. Except this part:

Thorne related that as he was being escorted out of the school, he observed two adult females lying in the hallway by the office. Thorne stated that they were near a bench and they both appeared shot. Moreover, Thorne stated, he did not recognize them....

That caught my attention.

Also despite news paper articles that likened him to paul reviere, giving the warning of a shooter. When asked "did you see anybody or not?"

this video is about:

March 15, 2014 (AE) - The entire media, including a very special journalist commissioned to interview and then represent Peter Lanza to the media, have all repeatedly stated a Sandy Hook "myth", which has no basis in fact... this would be the charge that "Adam Lanza was carrying Ryan Lanza's identification (ID)"... there is no evidence of this, in fact, the origins of this rumor can be traced back to Ryan Lanza himself. 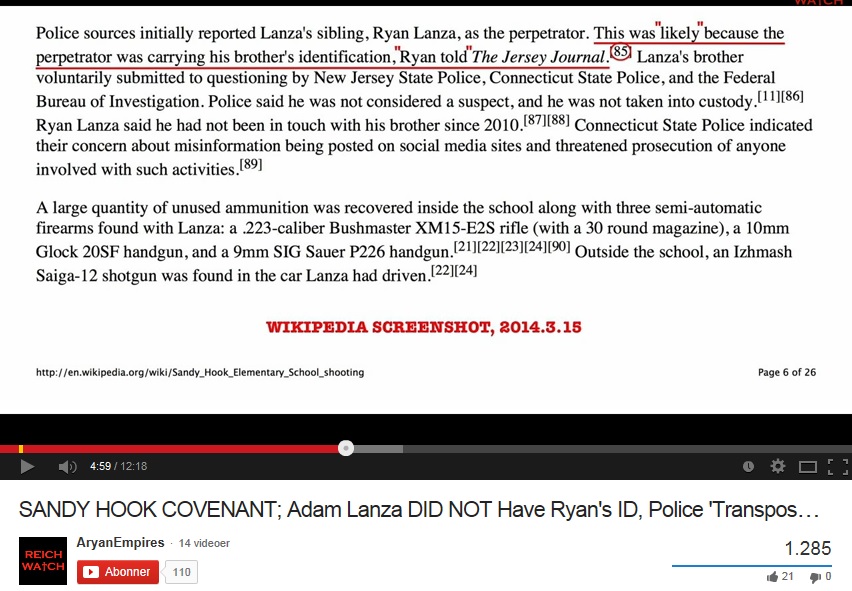 Nothing but nonsense has EVER been in the public eye regarding this story , and every other story like it.

Face it, the nonsense you choose to believe is far more ridiculous.

Always the forces of good are the ones who keep us from the truth, huh!!

originally posted by: MrSpad
the idea of profiting of the deaths has proven to be distaseful to most of the families.

You mean aside from the dozen or so families who IMMEDIATELY setup Facebook donation pages in the name of their freshly killed kids?


The fact no lawuit has been filed by a single one of those families involved is proof to me that this whole thing was staged.
edit on 5-6-2014 by 8675309jenny because: (no reason given)

edit on 5-6-2014 by Attentionwandered because: lol

Try see the video. But no there is no evidence fore the parents dircetly to get "death threats"

But the only lawyer fore One of the families has been getting "dreath threats". If you did see the video. Their is news clip about it.


I dont recall. But i Think at Others School shootings there have been alot of lawsuits in the past vs the government.

So its a little Odd that only One familie has tryed to Apply fore One and been turn Down. It was a ill-advise.

But on the other hand; only few days after so many donations sites fore the wictims...
edit on 5-6-2014 by kadara_dk because: (no reason given)

posted on Jun, 7 2014 @ 06:48 AM
link
In the event of 911 there has been eyewhitness accounts which contradict the official conspiracy theory. 911 has been used by Nato for 2 wars abroad and by America for the passing of the victory and patriot acts.

Where are the inconsistencies in this case? The tragedy has not been picked up to restrict gun ownership. Eyewitness saw Adam Lanza. The government and establishment wants to keep the gun business going.