The Florida Everglades has become the latest region to react against oil drillers and fracking, a technique that has spurred worries about earthquakes and water contamination across the country.

Concerns about an “enhanced extraction procedure” that conservationists in South Florida likened to fracking led an oil drilling firm to be slapped with a cease-and-desist order, face scrutiny from a U.S. senator and be questioned by residents about water supply safety. The company, however, contends that it is not using hydraulic fracturing, commonly known as fracking.


Dan A. Hughes contended in a statement Thursday that what it had done in December was an acid stimulation, commonly known as acidizing -- not fracking.

The company said acid stimulation, which involves injecting hydrochloric or hydrofluoric acids to dissolve oil-bearing rock, has been done for 50 years in Florida, including by authorities constructing water wells.

Dan A. Hughes noted that it had completed a similar procedure last summer. But this time around, workers also injected what it described as a “modest volume” of water and sand “under enough pressure to prevent the formation from closing in on itself.” The exact mix is considered a trade secret.

In hydraulic fracturing, a mixture of mostly water and sand is blasted into rocks to free oil and natural gas.

Check out the article for further reading. I don't know about the rest of you, but the habitat (panther refuge) the geology (limestone) and the proximity to the aquifer considered, this strikes me as a horrible idea waiting to bite people in the arse. I wasn't aware there was any exploratory drilling going on at all, though way back in the day I believe they used to drill oil in the Everglades. I can't see fracking, or any close cousin of it, being anything other than a mirroring of Oklahoma.

posted on May, 21 2014 @ 06:57 PM
link
They wont care who's lives they destroy and how much of the planet they poison, as long as they turn a profit. This is how these monsters operate.

originally posted by: Firefly_
They wont care who's lives they destroy and how much of the planet they poison, as long as they turn a profit. This is how these monsters operate.


Indeed, And then these corporations blame it on the People.

OP, I'm coming to be against hydraulic fracturing entirely. Completely. Perhaps after it STOPS for a bit? A very real debate on how best to go about restarting it could be had. The scale, downsides, resource usage and waste as well as attributable pollution isn't worth it. This Government has decided Coal is the mortal enemy...while promoting something which, on THIS scale? Is worse. Much worse, IMHO.

Hopefully Florida just says no. After all, Florida isn't too far from being colorful again...

Just one reason to 'just say no', IMO.

With all the sinkholes in Florida...these people have been smoking something.

They're going to end up sinking that State. There are lawyers just salivating at the idea of fracking and the laws suits that will bring them the big bucks.

posted on May, 21 2014 @ 09:27 PM
link
I don't like fracking. If they were reasonable about doing it, it wouldn't be bad, but they are going way overboard. They seem to handpick evidence they want to allow. They say there is no proof. We have seen this before, it always turns out bad.

Why do people think they have the right to complicate the lives of the future generations and the ability of the earth to provide for us.

posted on May, 21 2014 @ 10:46 PM
link
Yep, Wrabbit, we're finally seeing the drought index drop. It's becoming more colorful & lush looking up here around the Bay, compared to past years It's a shame all that excess water filtering down to the aquifers down here is under fracking threat, it's moronic. Way to give Mother Nature the finger for the extra wet stuff.

With all the sinkholes in Florida...these people have been smoking something.

They're going to end up sinking that State. There are lawyers just salivating at the idea of fracking and the laws suits that will bring them the big bucks.


Yeah, exactly. Florida's like swiss cheese underneath, the limestone is full of caves and underground streams & such. Not to mention also sinkhole-prone. So let's go fracturing this already testy foundation, that makes sense. A good steady bout of rain triggers sinkholes, do these people really think that fracturing the stone isn't going to do anything?

posted on May, 21 2014 @ 10:55 PM
link
Fracking is highly suspected of causing earthquakes....
Nuclear power plants are built on known faults...
Canada wants to run their oil pipeline, 5 feet below the earths' surface,down to Texas- and dilute the oil with Benzine so it will be thin enough to flow....
GMO's are highly suspect of causing a plethora of serious health problems...
The FDA approves drugs that are known to have serious/fatal consequences......
Aquifers are drying up...
Chemicals are poisoning the food chain....
Sink holes are swallowing entire homes....

Deliberately destroying the planet for greed doesn't make sense....
Do the elite have a contingency plan for when everything implodes?
I know they have the Seed Vault, and plenty of underground cities that can support life for several years, but still....

posted on May, 22 2014 @ 01:06 AM
link
Well, I've been off looking stuff up like the busy bunny I can be sometimes. Fracking just happens to occupy a special place of interest to me, living oh so close to the New Madrid Seismic Zone and Arkansas fracking inching ever so closer that way (still well away) as they can manage it. Oklahoma is on my other side and ..yeah.. 'nough said.

First, I found bad news... I wasn't aware of how much Florida already had going on, but, unfortunately, it's nothing new down there. It's nothing like the prolific mess of other states, but that's a mighty fine area sectioned off and shaded as holding potential, for someone with an eye toward getting some. 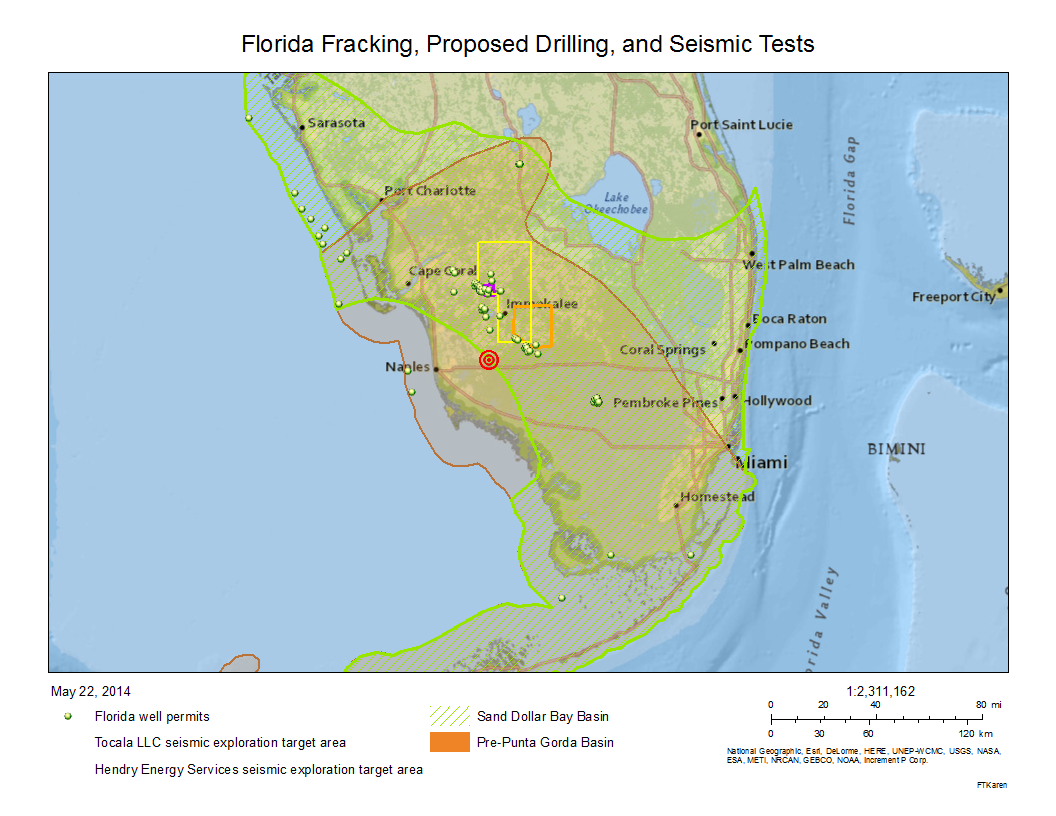 The legend is a bit hard to see for some reason, but the bullseye deals with a site from the same company the OP is about and I'll link below for a story with. It's quite relevant too. Next is a larger version of the whole state.... (sigh) 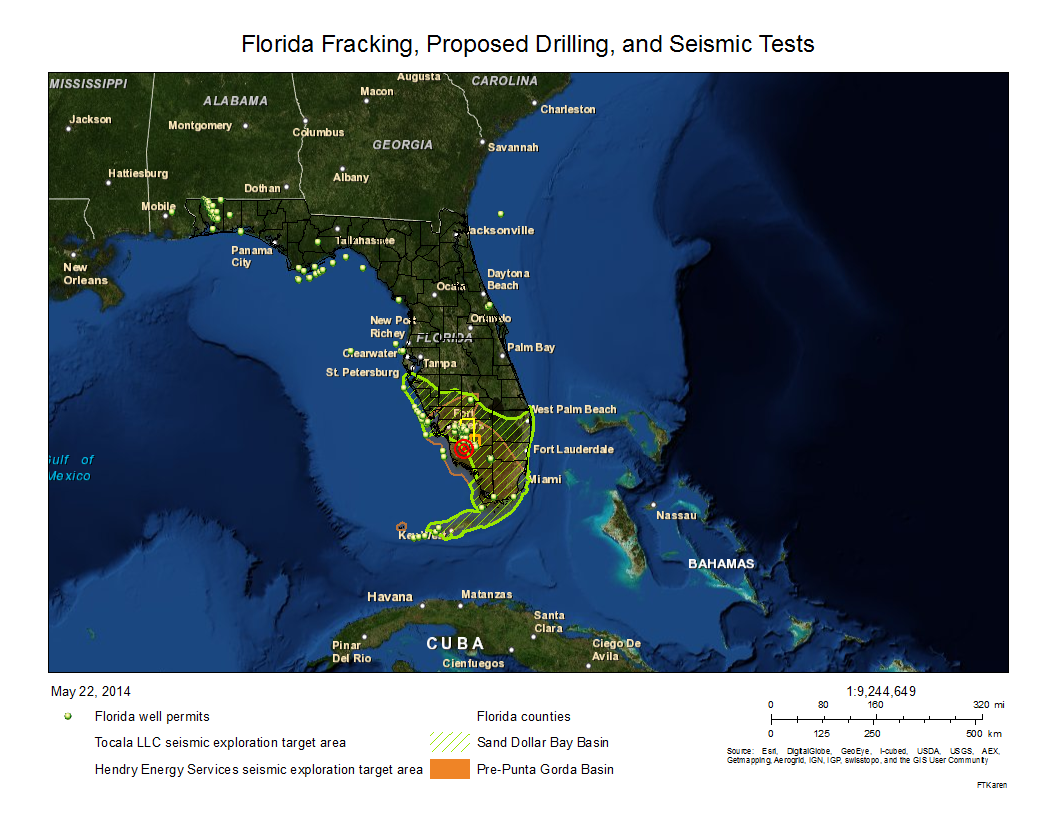 The FracTracker Site also had a very informative page which first led me to the maps. Among it's points.......

The method of extraction will be via “acid fracking” – the type of unconventional process proposed for the Monterey Shale in California – not hydraulic fracturing using water. Florida is underlain by limestone bedrock. Acid-fracking in this sort of geology creates cracks in the rock by dissolving the calcium carbonate, allowing trapped gas to escape.

In April 2013, in conjunction with the well permitting plan, 31 neighbors near the proposed well received notices that they were living in a “hydrogen sulfide evacuation zone.” Hydrogen sulfide is a often released from gas-bearing rock formations during drilling.

The company referred to there is the same. The "Dan A. Hughes Company of Beeville, Texas", according to the same article as above.

So what is Acid fracking? Or is it Fracking? The OP story and more recent way it's talked about by the company in Florida seems to say not. Hmmm.... According to a San Francisco write up of the process in Monterrey, California? It sure sounds like a hard thing to say is better.

Most oil companies will say little in public about acidizing. They don't want to reveal too much information to their competitors, each of which has its own methods and chemical formula. They also don't want to draw the attention of the state's powerful environmental lobby.

But environmentalists have noticed anyway. So have California lawmakers.

Indeed.... Many have noticed, actually. A good many have.

The article here says much more and covers a bit more about the acids being used in quantity to actually 'process' the deposits for release of gas/oil as opposed to the earlier uses...

Drillers have been pouring acid down oil wells for more than a century, using it to dissolve the underground drilling debris that surrounds new wells. Acid can also clean out hydrocarbon deposits that gum up older wells.

In the Monterey Shale, however, oil companies are using larger amounts of hydrofluoric and hydrochloric acids to open tiny channels in the rock around each well. Those channels allow oil trapped within the rock to flow into the well.

Despite drought, fracking uses millions of gallons of water

That last link there details in far more depth than some may be comfortable considering, just how much water is being used. Consider also, one of the key assurances of these frack/acid wells is the very fact they are thousands of feet down below and beyond usable, cycling water.

Interesting to consider that way, when one stops for a moment. So.....we're taking enormous quantities of water OUT of the natural processes we've all learned about in basic science classes and losing it beyond recovery forever. We do this while in a major drought situation and what may be a long term situation to adapt to for that issue.

National geographic's story there just kinda highlights the crazy aspect of what the fracking/deep acid drilling community sell as a GOOD thing. Where they use sea water? Great...we have enough of that. Where it's not? Well..?

** A quick note to add.... I asked the OP about the volume and length of material being added ahead and insured the big contribution wasn't an issue. Thanks Nyiah!

posted on May, 23 2014 @ 07:40 PM
link
Better late than never thanking Wrabbit for the information & links he provided (thanks, Wrabbit!) I'm still aghast, from what I've been reading about acid fracking, it's really no better than the alternative. Just as geologically risky, and just as polluting.

It's infuriating. We're letting the sugar industry dump their waste in the Everglades, and now we're allowing fracking. What was the point of dedicating all that money over the years to restoring the wetlands if we're going to pollute the F out of it anyway...

Now that Scott has been re-elected these projects will continue. There is also a natural gas down pipeline down Florida that is being built.

Florida Power and Light (FPL) is constructing a 600-mile natural gas pipeline that will consist of two (2) segments.


The first segment, which is being built by Sabal Trail Transmission, LLC, will originate in southwestern Alabama and cross Florida into the following counties, Madison, Hamilton, Suwannee, Gilchrist, Alachua, Levy, Marion, Lake, Sumter, Orange Polk and Osceola. This first segment will terminate at a new hub in Central Florida just south of Orlando.


The second segment, which will be built by Florida Southeast Connection, LLC, will start at the Central Florida hub cross into the counties of Osceola, Polk, Okeechobee, St. Lucie and terminate at the existing FPL clean energy plant in MartinCounty.

The Florida Public Service Commission approved construction of this pipeline, which will be the state's third natural gas pipeline, on Thursday October 24th. The last step in the process is approval from the Federal Energy Regulatory Commission (FERC).

It's fumy how everything is illegal, unless you are corporate bank Rat, with connections in our crooked bought and sold government.

But watch how they will lock up land to protect a frog, for their made up bogus,illegal reasons.

Don't worry, they have doomed their self, karma.

The truth is coming out, all these pervert, crook fat kats, are going to fry,

People just need to stop believing the lying turds, wake up, quite being so gullible (stupid). They said it "Stupid".
edit on 13-2-2015 by OOOOOO because: (no reason given)