I don't know how far you read down so I gotta reply with this update for those who missed it..

originally posted by: GareyGaia
A closer image of the statue head. 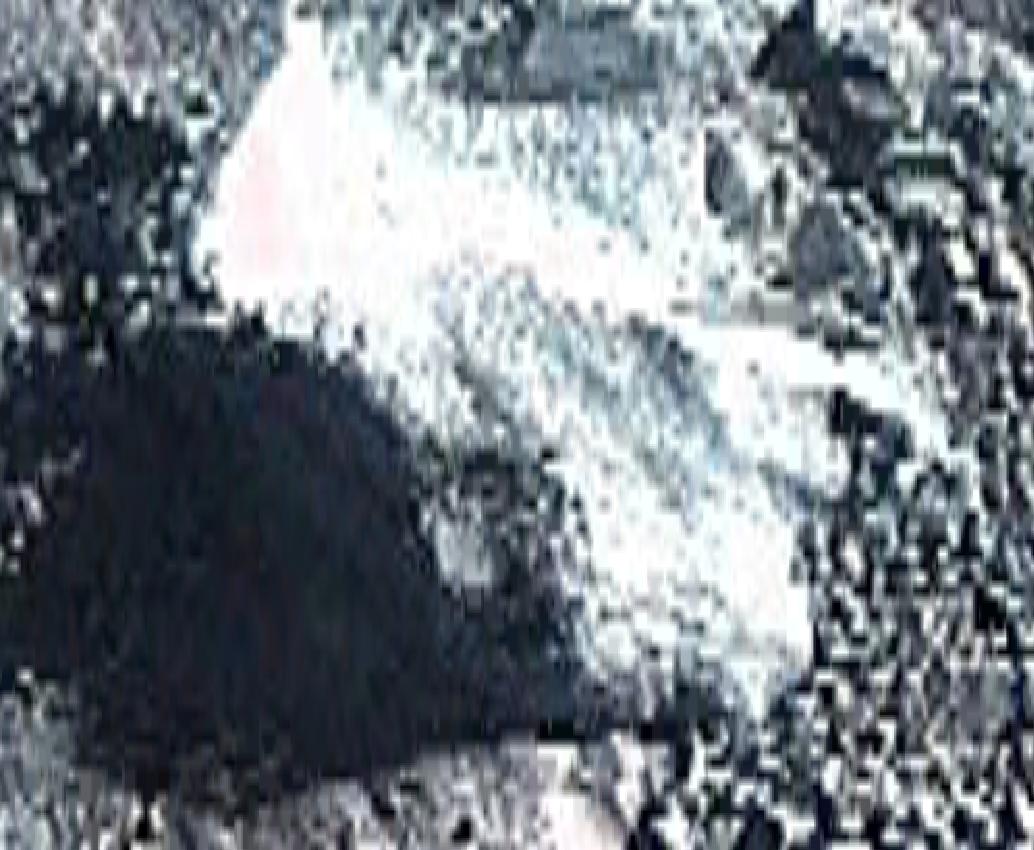 Notice the features that differ from a natural formation such as the pupil within the eye, the cheek bone, lips, and chin. 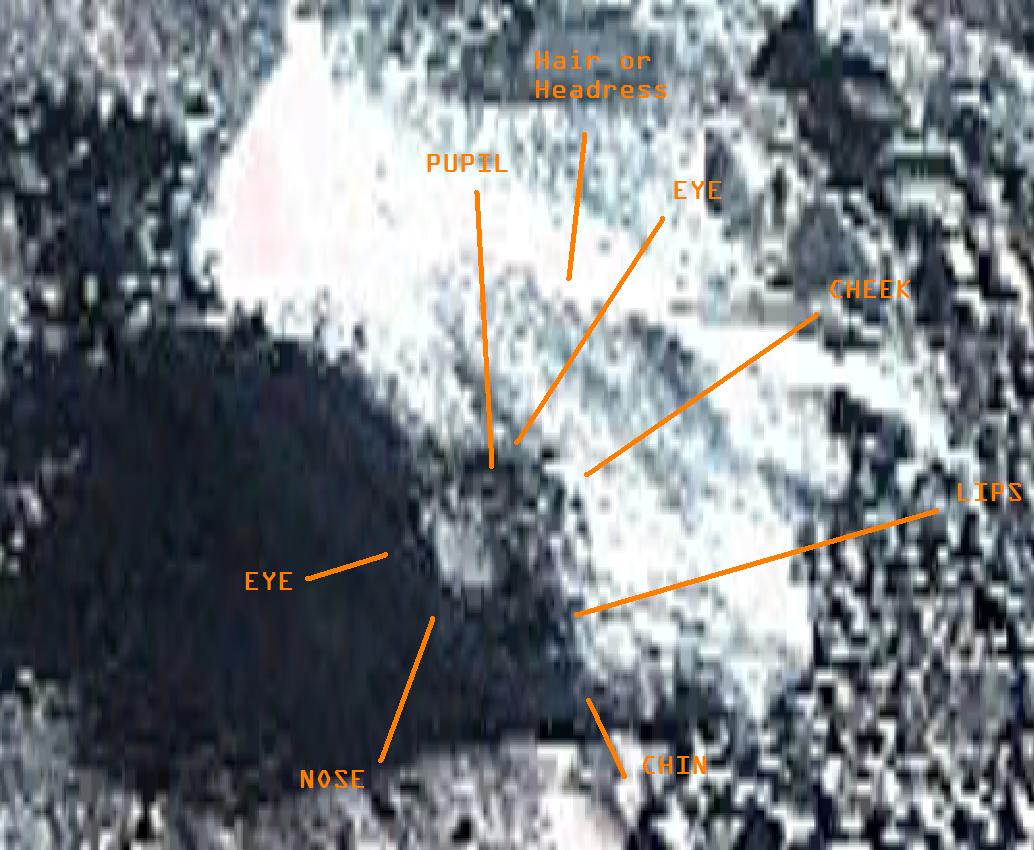 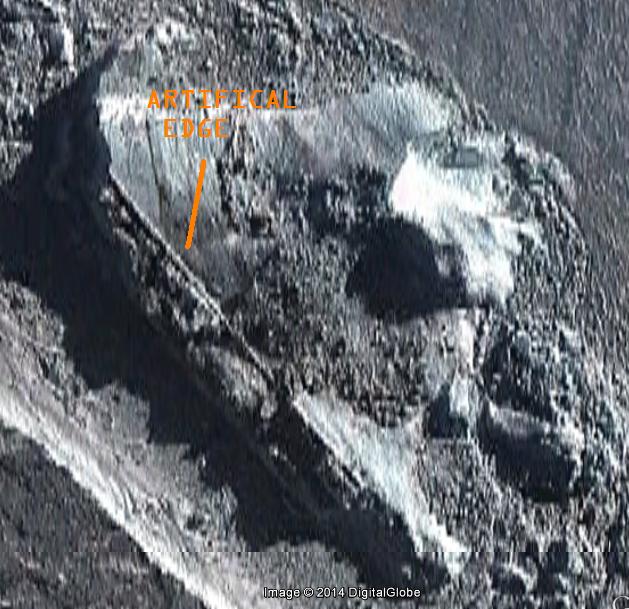 Notice up close it is reminiscent of a building wall and a closer look reveals the finer detail look at the pattern on the edge not random looking at all. Those indentations on the edge look repetitive at measured intervals. 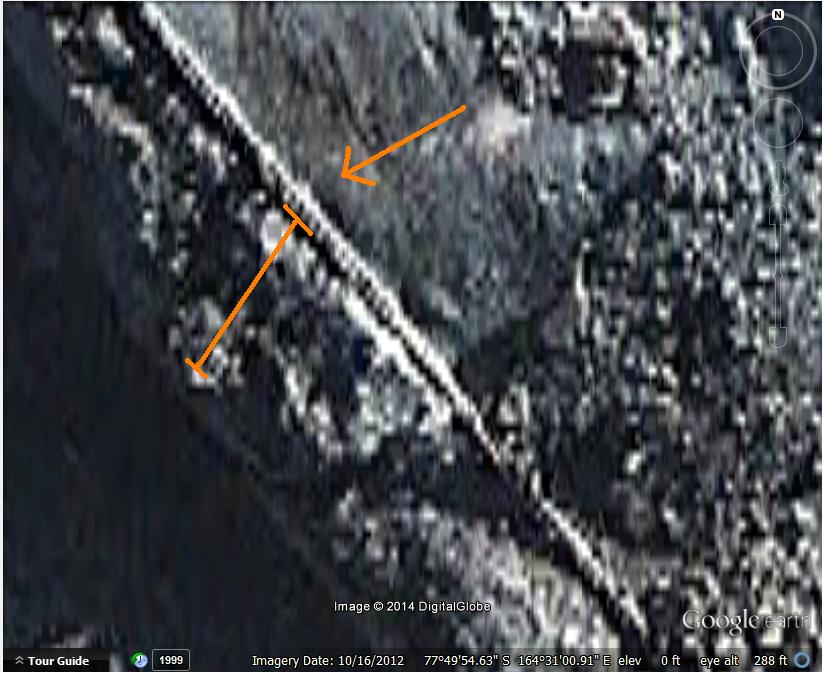 Looking at the bigger picture it appears as though the two structures were connected at one time and possibly may have held the statues head. 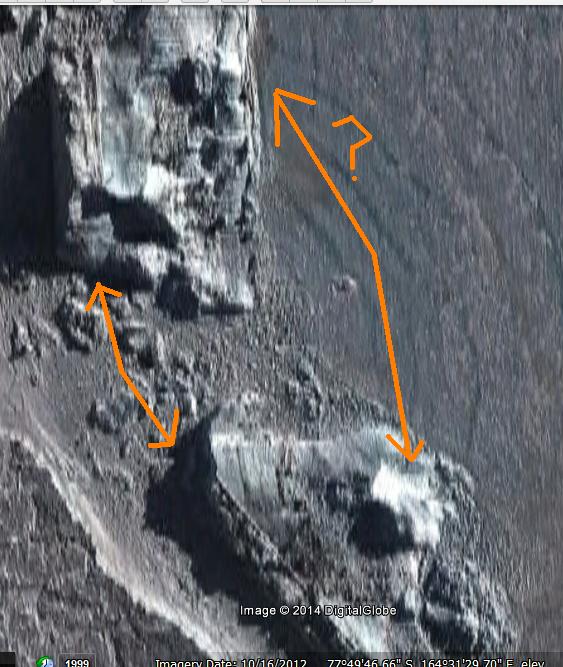 It's ice. Ice flowing down the Koettlitz Glacier and falling into the ocean.

posted on Apr, 24 2014 @ 10:08 PM
link
These are just natural patterns. The human brain can easily find patterns in the randomness of nature, and if you allow your brain's ability to find patterns to take the lead then you will see something strange in all sorts of natural phenomena. What you have found simply look like patterns formed by ice. And not only that, but let's consider something else...

If such a civilization existed on Antarctica, then it would likely have been when the continent was not blanketed by very thick sheets of ice. And if that was the case, any evidence of such a civilization would be buried so deeply that it would never be seen without a significant amount of ice melt.

Regardless, for such claims like this to be taken seriously there needs to be really good evidence. And since we know that patterns like this occur anywhere where ice builds up in such a manner, we cannot use this as evidence for manmade artifacts. I can guarantee that there are countless "images" in the ice over Antarctica. The only strange thing that I have ever seen, something that clearly is not natural, on Antarctica is the dome-like structure that looks almost like a door of some kind. Or like a large dome that is retractable.

But despite the fact that the object I am describing does not look natural, it still could be. The rocks could have formed in a perfect way, and coupled with the angle of the picture, and probably other factors, what we get back looks like a manmade object. Remember the face on Mars? When the same "face" is seen from other angles it becomes readily apparent that we saw a face because of not only the way the rocks were formed, but also because of the angle of the photograph.

Another thing to keep in mind is when you zoom in so much on an image you are going to get little lines due to pixelation. I have actually seen people zoom in crazy amounts to the point that nothing can be made out, and they say that all those straight lines that are seen are objects that are not natural. This is usually done when finding structures on the moon or mars. It is laughable that people actually believe something like that. What you have found is not as bad as that in my opinion, as the extreme zooming thing is virtually impossible to overlook, so I don't see how someone can do it and believe what they're saying.

But you did not zoom in quite that far, and what you are seeing is actually there for the most part, rather it is just your interpretation that seems to be incorrect. These same types of patterns are found in both ice and rocks as well.

originally posted by: GareyGaia
A closer image of the statue head.

Notice the features that differ from a natural formation such as the pupil within the eye, the cheek bone, lips, and chin.


I have no idea how you see these things in that picture...
It is just a grey in grey pixelated picture

posted on Apr, 25 2014 @ 02:19 AM
link
Ah yes, the super secret ancient antarctic nazi-reptiles have done it again. They have carved a rock with a glacier in a matter of a few thousand years and now the government is covering it up with ice. I have proof! There are multiple airfields nearby and even a radio station! Why would they build so many airfields there if there wasn't anything out there to cover up? A-HA! That's it! They are probably smuggling humans to the antarctic to feed them to their ice-lizzard nazi-communist overlords who need energy to move the glaciers and finish their ancient plan: THE ROCK STATUE OF.... OF A THING. Congratulations OP, you have foiled the evil plan of the million-years old hitler-lizzards with a single Google Earth image! Now the icepick-nazi-stalinist-reptilians will be out to get you. BE AFRAID!

Take a look at some pictures and maps of glaciers and how they create all kinds of formations. Yep. It's ice and rocks. You can actually trace back the route of the glacier straight back to the mountain just west from the supposed "ancient statue". Stop calling this evidence, because it's clearly a waste of time and has nothing to do with ancient civilizations.... I have seen more convincing pictures of supposed "artifficial" things from the Moon and Mars... Which were also probably rocks.

If these were structures, they would likely "as they are close to the coastline", be from an old whaling station ant not from an ancient civilisation.

originally posted by: immoralist
Why do people on here always go for the most complex least naturalistic explanation for a strange looking geographic feature? jesus....

Because they are by and large ill-informed and come to the table with preconceived ideas which will not be shaken, facts be damned.

posted on Apr, 25 2014 @ 10:52 PM
link
Their is a lot of dismissal and ad-hominem being thrown around here. Its easy to do. Attacking my character just makes you all look unprofessional and ignorant. You know whats not easy to do around here apparently is be skeptically open minded to the possibly that this evidence is indeed a discovery indicating an ancient civilization. It is not 100% debunked as ice or a rock. Let's say that one would be searching an area on satellite images in a place where one is in the questions as to its possible history such as human settlement, technology, and civilization. To assume we know the history of the world from what is only mainstream is a confirmation bias, that will prevent you from seeing possibilities of evidence available and possibly to the contrary of mainstream beliefs. The next step would be to analyze the satellite images for features or signs of artificial patterns such as straight lines, 90 degree angles, and material differences in the landscape which all may lead to discovery. When searching satellite imagery location is key. It is not very likely the remnants of an ancient civilization will just be exposed anywhere on such an icy continent as Antarctica if such possibility does exist. In the case of the statue head evidence shared in the OP the best sites to analyze for any possible remnants would be what would be the exposed land in Antartica. The particular area in question is at the tip mouth of a glacier so yes their is a glacier. BUT... If you bothered to check for yourself the coordinate I had listed you would have seen that it is indeed a tiny portion of exposed land at the end of the glacier. Sorry if that is hard to believe but the evidence speaks for itself. Next through slowly analyzing the area I picked up on the statue head. I didn't jump to the conclusion that it was definitely a statue head right away in fact I sat on the discovery to think about it for about 2 month. After long reflection I decided it was important for the public to know of this discovery. If you took some time to analyse the facial features you would find indeed that the odds of rock or ice forming as such would slim. Even though the odds of discovering this statue head was extremely slim, given the the fine detailed features of the face of the find it is very closed minded to assume its just a rock or ice just because their is a lot of that around the area. It is simply not the best explanation despite popular belief. To those who participated in the ad-hominem you should be ashamed of yourself for attacking my character, it added nothing of intellectual value to this forum and is a drain on this website community. I am not saying you gotta believe anything, but at a bare intellectual minimum sometimes you gotta be skeptically open minded to the possibilities even the ones you would like not to believe possible, and that does not mean you have to believe in them on faith.

Neil Armstrong stated the Moon was ""ringing like a bell" after the lunar module landed...so it's not totally crazy to think the same about Earth. The Nazi's weren't running down there in U-boats for ice cubes.

Your wall of text looks like a glacier. Things that look like other things are the way our brain checks out the world, in order to see predators or members of enemy tribes. So our brains are programmed with mushy-software to see faces and human heads in nature. It is very interesting when it comes together well, but is nothing more than nature working with our brains to show us images which may or may not be safe to approach when we see them in "the wild".

posted on May, 19 2014 @ 12:12 AM
link
It is interesting to witness the denial. Even facial recondition software picks this up as a face. I talked to a forensic image specialist not stating the image source from google earth and they picked out several unique facial recondition patterns not found in nature. Its funny though because instead of those claiming to be debunker's here, they rely mainly on their petty insignificant opinions instead of using evidence to prove their points. And even if they had a legitimate debunk for this, they would by rational at least to admit the facial patterns that occur... but wait its just ice.... dooooooooooooooooohhhhhhhh....... you know, i am wrong, because main stream historians have not yet approved this material for public consumption...