Did we spot, and photograph, a Bald Eagle in Phoenix today?

If you just google image "Golden eagle" there are some photos of eagles with those big ol legs that can be seen in the OPs pics.


We see lots of those on the trails, this was much, much bigger… perhaps twice the size, or more, of any of the hawks we've seen.

Maybe a Ferruginous Hawk. Cool pictures, thanks for sharing.

NiteNGale2
Not a bald eagle. I see those often enough.

Peregrine falcons can have a black head with a light underside. Here are a few Images to compare.


It's not that much of a stretch to run with that deduction visually but do they get to be three feet in length as was suggested by the OP? I do see why you see what you see otherwise

posted on Apr, 14 2014 @ 12:12 AM
link
Cute bird you found there.
But unfortunately It's not a bald eagle, I've seen many where I live in the northwest -would be quite the find if it were though.
I can also say It's not a golden eagle because they don't sport a white chest.

So that narrows it down to It's some kind of hawk. A big hawk.
Looks you either found an adult Red-Tailed Hawk (most likely choice - white chest sporting full leg feathers, largest hawk in N-america right along side the Ferruginous Hawk); a Ferruginous Hawk, or an absolute freak of nature Osprey (unlikely).

If there were a better zoom in on the layout of the leg feathers which would be an important indicator along with the color scheme at the end of the tail feather we could then narrow it down further from there.
edit on 4/14/2014 by unb3k44n7 because: (no reason given)

I was starting to think I nailed it with golden eagle. But red tailed hawk looks really promising.


ohh. That does rather have the appearance of a red-tailed hawk. Such a pretty raptor.


ohh. That does rather have the appearance of a red-tailed hawk. Such a pretty raptor.


They have a lot of variation in their coloring..
Gonna have to say Redtail Hawk as well.

GoShredAK
To me it looks like a Golden Eagle?


GoShredAK
To me it looks like a Golden Eagle?

Size! Open should see hawks all the time...if the bird is say 3 times bigger...then I still lean towards golden eagle..


It is great to see such large raptors making a come back, they are incredible to see up close.

This is definitely a Buteo (eagles, hawks and vultures), and looks to me to be a Very large Red tailed Hawk. The giveaway is the very long light legs in combination with the white chest and lower throat running up just over the shoulders. That white patch is fairly unique to the red tails. It does look a bit darker than the typical but this could be caused by the lighting, or it could be what's called a dark-morph.

If you zoom in you can just make out the speckles of the upper thigh. 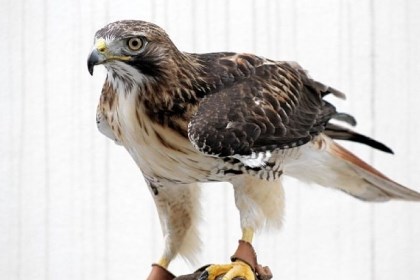 I'm now on the fence with Golden Eagle and the Red-tailed Hawk.

I'm off to research the max size of hawks, because the size sounds very eagle like.


GoShredAK
To me it looks like a Golden Eagle?

Size! OP should see hawks all the time...if the bird is say 3 times bigger...then I still lean towards golden eagle..


According to our "Birds of Arizona" book, Ospreys are only known to be near the lakes north and south (by quite a bit) from Phoenix… and some around Flagstaff. They'd need to fly over long stretches of desert to get to Phoenix.


Sure looks more like an Osprey than the other birds mentioned. Parts of AZ are within its winter habitat.

I have reverted back to Golden Eagle.

except one dwarf the other.

I'm with on bigburgh on that one, red tailed hawks supposedly only grow to be about a foot tall.
edit on 14-4-2014 by GoShredAK because: Oops

posted on Apr, 14 2014 @ 01:00 AM
link
Due to the small size of the beak I'm going to have to say this isn't an eagle.
Seen many bald eagles and osprey and of the 2 osprey seems far more likely.
Nice sighting all the same.
Eta: looks to be eating a snake.
edit on 14-4-2014 by Asktheanimals because: (no reason given)


I've got to go with unb3k44n7 on this one. When I zoomed in on the images the speckled cream of the legs can be seen. Ospreys sometimes have speckling on the lower belly but the legs are very white.

I live in the north west as well so am fortunate enough to see large raptors all the time,and have come across some Very large Red tails.

It's definitely not an eagle IMO. The first time I saw a bald eagle, it flew down over the river and over our heads. It was frightening. I was shocked by the size of it and I suddenly felt very very small.

On-topic: I'd bet against a bald eagle in favor of a red-tailed hawk.