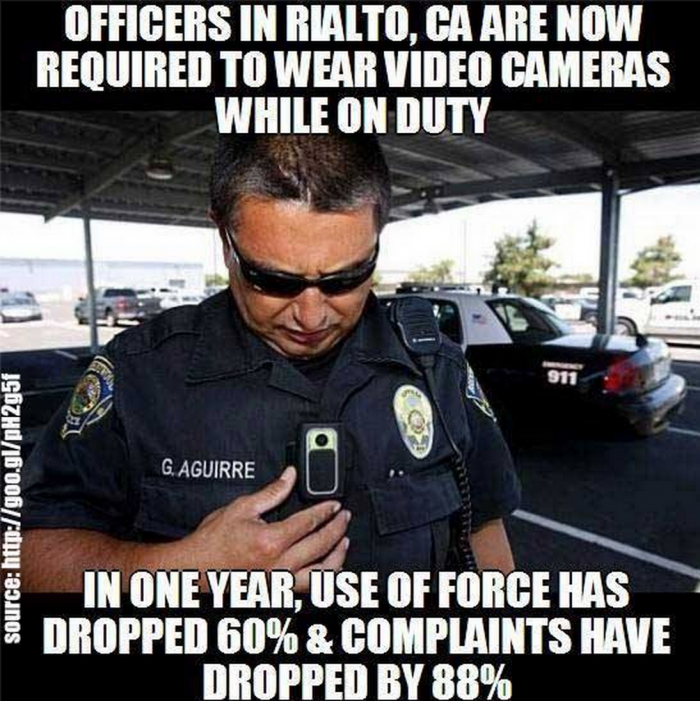 Rialto, CA- The Rialto Police Department, over the past year, has been experimenting with equipping body cameras to the 70 officers on its force. The initial results show a promising solution to the excessive use of force by officers.

The police chief in Rialto, Tony Farrar, is on record as stating, “ I think we’ve opened some eyes in the law enforcement world. We’ve shown the potential.”


Good news for everyone, the police and the community! Many of us here have suggested this as the only or best way to discourage and prevent abuse or inappropriate behavior. We know that a camera will certainly affect one's decision making and actions and this idea has already made a difference of 60% reduction in force and 88% drop in complaints. Ding ding, we have a winner here!

When those in a position of authority are watched they are less likely to abuse that authority. Chief Farrar says, “That’s just human nature. As an officer you act a bit more professional, follow the rules a bit better.” In addition it also helps protect officers from false accusations of excessive use of force.

Chief Farrar is providing a new paradigm for policing, taking a proactive approach rather than making excuses for his officers and toeing the line. To his credit he has a master’s degree from the Cambridge Institute of Criminology, from which stemmed the idea to utilize cameras.


I am surprised this hasn't been tried or implemented, before but LA is a prime place for this and obviously it makes a huge difference!

The scientific evidence clearly demonstrates that this program could be an effective and efficient model for nationwide police reform. If you would like to see a similar program implemented in your area, get in touch with your mayor/city council/county board and demand cameras on officers in your local jurisdiction.


Indeed! This a complete win for all sides and hopefully will become the standard amongst our leo's.
benswann.com...

LAPD officer Jim Stover is one of about 30 officers testing out three new different types of cameras, ranging in price from $400 to $800. The cameras are worn on belts, collars and sunglasses.
"I don't mind the technology, it makes everything a lot easier, especially for court," said Stover. "There's nothing that actually solidifies a case more than the video."


That is important, no editing ability or use by individuals.
abclocal.go.com...
edit on 11-3-2014 by speculativeoptimist because: (no reason given)

Ty very much for posting this


This should have been a requirement from day 1 in my eyes, but I see this as progression! This should be a requirement EVERYWHERE now.....I guarantee they see the people as liars who call and complain or open a case against a cop...Funny how the numbers fell through the floor when cameras were all of a sudden brought into the picture, huh? People aren't such liars anymore

posted on Mar, 11 2014 @ 02:36 PM
link
Still video all authority figures to keep them honest. Personal video or dash cams on LEOs have a strange way of malfunctioning.

My pleasure LSH! I bet any tampering with or losing the camera will be an infraction, and the cost will probably serve to increase responsibility.

My pleasure LSH! I bet any tampering with or losing the camera will be an infraction, and the cost will probably serve to increase responsibility.

I would have to agree!!! Absolutely!!

Liars on all sides for sure, this will be a change in police/citizen relationships. Heck it may even encourage an outreach of kindness and bring back that 'serve' part of protect and serve. I am surprised this has taken this long to be implemented, but is major step in the right direction.


These cameras seem fairly high end and hopefully less prone to glitches. I wonder if it will be broadcast live within the agencies or just all recorded for review? Either way it is a game changer for the better.


I wonder if the government will roll out a Law in the next 44 days making the wearing of live-streaming cameras mandatory for all state and federal LEO's so as to provide additional security to its citizens and LEO's.

Either way Apple, 2 years ago patented technology to disable smartphones from using camera,speaker and data transfer. Other Tech giants are probably fine-tuning that tech to the nth degree by now. For instance, during protests and/or public gatherings when the use of excessive force is more likely, the LEO cameras could be disabled

which would allow government and police to block transmission of information, including video and photographs, from any public gathering or venue they deem “sensitive”, and “protected from externalities.”

Liars on all sides for sure, this will be a change in police/citizen relationships. Heck it may even encourage an outreach of kindness and bring back that 'serve' part of protect and serve. I am surprised this has taken this long to be implemented, but is major step in the right direction.

IMHO, it's taken this long to get implemented because of push back from the police and police unions. For the most part, they don't want to be watched.

I am completely for this being mandatory for every cop on the street. If s/he interacts with the public, it should be recorded.

posted on Mar, 11 2014 @ 03:41 PM
link
And the ones that dont want to wear them are probably the ones that are up to no good and should be issued the first ones that come in.


and less people pee in a pool when you lie and tell them a die is in it....how can it not decrease...the fact is even in justified use of force situations can be resolved in other means...just a matter of the person putting aside a bit of pride and looking at the bigger picture..


I doubt we see a widespread enforcement so soon, but since this will significantly save the agencies from lawsuits and complaints the motivation should be strong.


which would allow government and police to block transmission of information, including video and photographs, from any public gathering or venue they deem “sensitive”, and “protected from externalities.”

A great piece to this puzzle and I wonder if this will be applied. Imo the cameras should roll constantly regardless of situation, it is in everyone best interest.

Apple patented the means to transmit an encoded signal to all wireless devices, commanding them to disable recording functions.

Those policies would be activated by GPS, and WiFi or mobile base-stations, which would ring-fence ("geofence") around a building or a “sensitive area” to prevent phone cameras from taking pictures or recording video.

Apple may implement the technology, but it would not be Apple's decision to activate the “feature” – it would be down governments, businesses and network owners to set such policies, analyzes ZDNet technology website.


Sounds more for civilians but I bet you are right and some efforts may be used to restrict filming at protests in particular, which to me is one example where they should absolutely keep the cameras rolling, what's the fear? Oh yea, some officers may not be able to control themselves. Well put a camera on them, it will help
I am trying to get inside of the police leader's minds and I can't see them choosing not filming at a protest verses filming, ultimately. It makes more sense to record what actually happened as opposed to depending on hearsay.
Thank you for your contribution, and btw, who is that in your avatar?

I bet insurance liability savings will be an influence from the top. The reduction of complaints/lawsuits weighs very heavy in these decisions from the department heads.
edit on 11-3-2014 by speculativeoptimist because: (no reason given)

posted on Mar, 12 2014 @ 03:16 AM
link
Since insurance companies seem to dictate so much then they should tell the police that they must wear cameras in order for them to get insurance.

I bet insurance liability savings will be an influence from the top. The reduction of complaints/lawsuits weighs very heavy in these decisions from the department heads.
edit on 11-3-2014 by speculativeoptimist because: (no reason given)


Sad that this is the motivating factor though... With numbers like that, it goes without saying this is long overdue and probably should have been implemented as soon as the tech was available.

Another thing that's good is it will provide very reliable evidence for people that are committing crimes against officers, and/or are caught in the act.

The only negative is I assume the personality types that were drawn to the job for the wrong aspects, will probably seek to get into undercover/plain clothes units to maintain their behaviour. Which could end up with some seriously out of control smaller units.