This is a very low tech water filtration method. This is the easiest method of water filtration that I have come across. It seems like anyone should be able to replicate this process with very little supplies.

What I don't know is how fast this will work and the quantity of water created. I would suspect the water would taste a bit like wood, but be suitable for an emergency.

Here is the link fixed.


Oh, now this is good, thanks for submitting it.

The lower limit of the filter was around 100 nanometers—smaller than bacteria.

And they did not even try to patent their 'invention', nice to see such a positive story on ATS.


Yeah, I hope no one actually needs this any time soon. It is good to know that it is quite easy to filter water. Just stock up on some tubing. I don't know if you need the clamp thing.

Also, if you have any cilantro, add that to the tube too. It will make the water taste like cilantro, but it will remove heavy metals.
cilantro filter

I read a headline about this but never got a chance to look at the article. Thanks for posting.

This has me hopeful.


It could be especially useful in the developing world, where water-borne diseases are common and filters may be either expensive or have onerous cleaning requirements that make them unlikely to be useful. 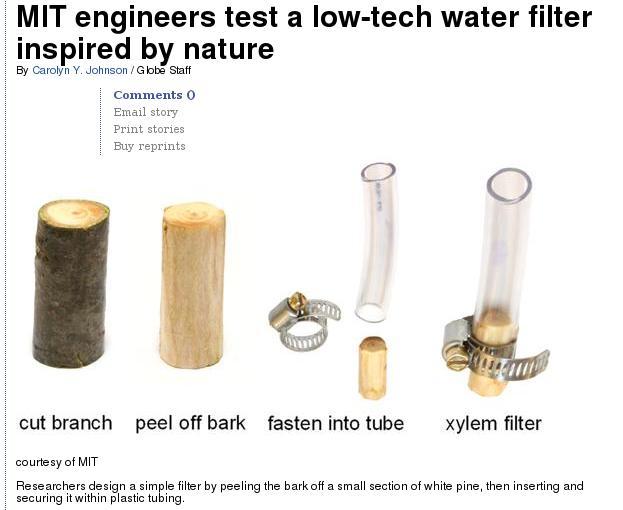 If they increased the length of the plastic tube there would be more water pressure, and that might increase the amount of water cleaned.


And they did not even try to patent their 'invention',

It would be not possible to patent something that at its core just uses a material that anyone can obtain and use.


And they did not even try to patent their 'invention',

It would be not possible to patent something that at its core just uses a material that anyone can obtain and use.


Yes you can (well at least in many countries), when you put things together in a non-obvious way it becomes an invention.


What would be better to filter? Some somewhat clean looking water you collected and boiled first?
Your pee?
edit on 6-3-2014 by jessieg because: (no reason given)


Im not sure , essentially you are using untreated wood as a filter. That's not really an invention and the wood does that naturally. I cant see how you could stop anyone from using a natural filter like wood as a filter.

Who can make fresher air then a tree? All the while, creating shade, a habitat for animals, nourishing the earth and looking beautiful all at once. I am aware that lava and hurricanes are natural too, you can't have it all with nature. Balance is necessary.

One of many examples of why we need to work with nature and stop trying to patent and control it.

Nature is already working for us.

Thanks for sharing this story, I will surely try this when spring arrives.

hell for that matter you could take part of a tree trunk and cut the bottom out of a five gallon bucket and drive it on the trunk to get more water.

posted on Mar, 6 2014 @ 09:39 PM
link
Living in WA state there are plenty of pine trees just a step out my door. As soon a I get out of class for the quarter, I may have to take advantage of this horrible weather and test this filtration system out.

posted on Mar, 6 2014 @ 11:00 PM
link
According to this abstract, 3cubic cm of sapwood can filter several liters a day. That doesn't sound like what is going on in the video posted above.


While the pores in sapwood are too big to filter out salts,

Makes you wonder if there is a simple way to filter radioactive particles out of water, and make it drinkable. Could come in handy in a shtf scenario.

jessieg
What would be better to filter? Some somewhat clean looking water you collected and boiled first?
Your pee?

Filtering your pee with this will give you very clean pee to drink.

You can do that with a RO filter if you've got a lot of pee and you don't mind possibly clogging your membrane up early.

There are a lot of nifty filters out there, I'm always surprised that it's so hard to take a good filtering technology and develop it. This one seems interesting for getting bacteria and parasites out although it will leave in viruses and chemicals.

Long ago, we did a filter that rocked in conjunction with a very well-known appliance company. It was a bit frustrating. They had a lot of bucks, and plopped them out as we developed a very nice filtering element with a third tier that did that sort of thing. Basically, it started out as a very large bundle of plastic tubes like soda straws (but smaller...). You heated the thing and drew it mechanically, and the tubes reduced in thickness and diameter until the result was a seemingly solid white cylinder that had pores smaller than a virus where the lumens of the tubes had been, about an inch across. It had an amazingly low filtration pressure, since there were so many pores and they were really smooth inside the bores. Water pushed through this thing would pass but anything as large as a virus would not go through. On the intake side we had a debris filter to keep the chunky stuff out of the primary filter so it didn't clog, and on the outlet side we had a mixed anion-cation ion-exchange resin bed you could swap out easily that took out metals, combined with an activated carbon bed for organics.

In the field, you got a pretty long life with the primary filter, the gook filter could be rinsed and reused several times, and you chucked the back end filter as needed, there were little indicators that changed color as the resin was used up.

We used to drink ditch water with the thing. There wasn't a lot that could get past it. Our idea was to market it for military use, but they didn't want to do that, they didn't see camping as a large enough market, didn't want to put it on airlines (you really ought not drink anything not bottled on a plane...) or sell it in Europe in those countries where the tap water isn't potable, so they killed the project off and left the filter element company people swinging for the development costs. At one time you could still buy the main filter element off-the-shelf from the place, haven't been back for years to see if they still have it.

Makes you wonder if there is a simple way to filter radioactive particles out of water, and make it drinkable. Could come in handy in a shtf scenario.

Large particulates will come out with a decent filter. Radioactive soluble stuff like potassium or iodine would take either RO, distillation or a mixed ion-exchange resin bed.