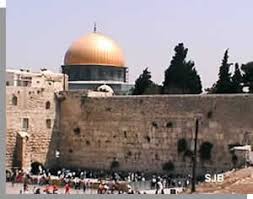 Authorities in Israel stated yesterday that the eastern Temple Mount wall was in danger of collapsing at any moment. An earthquake measuring 5.0 struck Israel back in February, and the Israel Antiquities Authority immediately filed a classified report about their worries of the Temple Mount structure. Egyptian and Jordanian engineers have carried out test and determined that the 2000-year-old eastern wall was very unstable. The Al Aqsa Mosque and the Dome of the Rock, which are both sacred to the Muslims, could both be destroyed if the wall fails.

haaretz.com
The eastern wall of the Temple Mount is "in immediate danger of collapse," the director of the Antiquities Authority, Yehoshua Dorfman, told the Knesset's Interior Committee yesterday. If this happens, it will have a domino effect that will lead to the collapse of a considerable part of the compound, he warned.


The integriity of the Temple Mount was already in question before this latest earthquake. In 2002 Jordanian engineers were called in to repair a large bulge in the southern retaining wall. Israel Antiquities Authority points to construction by the Palestinians in "Solomon Stables" under the Temple Mount as the cause of this problem. The Palestinians began constructing a large mosque under the Temple Mount in 2000, and have been working on it ever since then. The Israeli Antiquities Authority would like to supervise this construction, but since the Waqf (Palestinian religious authority of Jerusalem) is in charge of the security there, no Jews are allowed in the underground areas.

When King Herod build the Temple Mount he filled some portions with rubble, but he also constructed vast underground halls with large pillars to support the upper structure. The entire structure is a carefully engineered design, and contains stones weighing up to 150 tons. Simple logic would dictate that tampering with the structural design could bring the entire structure crashing down.

Adding an earthquake to the mix of improper construction methods only increases the risk of total failure. Israel has a history of earthquakes which date back to 31 BC. The Dead Sea Rift runs the length of Israel, and passes directly under the Temple Mount. Seismologists state that unfelt tremors happen constantly in the rift, and underline the instability of the region. The Hebrew prophet Zechariah, told of a coming earthquake that would split the Mount of Olives in two, creating a large valley.

If for any reason the Temple Mount is damaged, the outcry from the world's Muslim population would be severe, and all fingers would be pointed at the Jews. This would be espically true if the Dome of the Rock was damaged or destroyed. However, it appears that the Palestinians may be creating a disaster of their own doing, and will have no one to blame but themselves.

posted on May, 20 2004 @ 01:56 PM
link
This could possibly set the stage for the anti-christ to come and rebuild the Temple if it collapses.

Originally posted by Illmatic67
This could possibly set the stage for the anti-christ to come and rebuild the Temple if it collapses.

Does biblical scripture support this idea?

posted on May, 20 2004 @ 02:03 PM
link
Of course this wasn't brought up in the article, but yes, your insight is working very well. This is probably the most dangerous site in the world. Anything that happens in Jerusalem, and espically at the temple mount has enormous consequences. It does appear that a temple will be rebuilt, but how could this be unless the Dome of the Rock exixts?

posted on May, 20 2004 @ 02:27 PM
link
There are some allusions in the scripture that the rebuilding of the temple will occur during the end-times.

While reading some more about this I stumbled upon several places where a particular Jewish sect firmly believes that the Ark of the Convenant and Moses' staff is buried beneath the temple. What kind of effect would that have on the political and religious climate in the world if those were found!

posted on May, 20 2004 @ 02:42 PM
link
Facinating, as the Palastinians don't believe it, all people can do is stand around and watch it fall. It would certinaly be interesting to see the subsequent reactions.

The temple and restarting the animal sacrifices are required for several of the end time prophecies to be fulfilled...

Building blueprints for the temple are ready. All that is delaying building now is the presence of the 3rd holiest site in Islam, the Dome of the Rock which lies over the old temple site. Therefore, the rebuilding of the temple is unlikely at the present time.

Possible scenarios for the rebuilding of the temple:

Originally posted by Netchicken
It would certinaly be interesting to see the subsequent reactions.

Oh man, you're gonna have every christian in an uproar. The destruction of the temple is a MAJOR deal in Christianity. You're gonna have Jack Van Impe going nuts LOL And oh man...lol I can just imagine all the stuff...wow...

ROFLMAO! Jack Van Impe...I love this guy! He's been telling us all "the world is ending, and you need to buy my video about it" for like, 20 years now.

posted on May, 21 2004 @ 02:22 AM
link
Seeing how Israeli, Egyptian and Jordanian officials with expert knowledge of the problem have all agreed with the warnings I suppose the ball is in the court of the Palestinian waqf now. Personally I'd suggest allowing them to help. Israel has a holy site in the area as well, you know, and wouldn't want the mount to collapse either. I believe this issue should transcend the fighting and should be worked on immediately.

I would argue that the temple mount is the most important piece of land in the world.

The world will always be at odds over Israel. Even the bible says this.

Israel's border dispute with the Palestinians will never be resolved because both sides want full sovreignty of Jerusalem.

If Jerusalem is to be divided then this will never be resolved because both sides want the temple mount.

The Jews have everything ready to rebuild the temple, all they need is an oppertunity to do so.

The bible is very clear that the temple will be rebuilt so that the anti-christ can desecrate it. Even Jesus confirmed this by quoting the prophet Daniel. The book of Daniel was written about 500BC...

It seems fairly obvious to me that with the temple mount slowly collapsing it is a sign that we are close to the rise of the anti-christ. Daniel makes it clear that the anti-christ will take control of a reborn Roman empire. That would be the EU which is very close now to surpassing the USA. Basically all it will take is the iminent collapse of the USA for the EU to be propelled forward as the new economic superpower.

Lets not forget that if the temple mount collapses taking the Dome of the Rock with it then all hell will break loose in the Muslim world, especially so if the Jews try and build a temple in its place.

I'm just waiting for another earthquake on the faultline that runs through Jerusalem.

Heh, if this actually happens we'll be too busy watching 24 hour news to post on ATSNN

As a Christian I know this is going to happen, its just well cool to watch everything play out exactly as the Bible predicts.

I'm watching out in no particular order for:

1. OPEC switch to selling oil in Euro's *
2. Tensions between China and the USA over oil or Taiwan
3. Global oil production shortage and $70 oil *
4. USA abandonning Israel for God to defend *
5. Major terrorist strike on the USA
6. Jewish temple being rebuilt obviously *

posted on May, 23 2004 @ 06:24 PM
link
Another article from Isreal on this, dated 18 March seems to lay the blame squarely on Palestinian construction methods.

Already they are starting the blame game...


Uri Ariel has called for an urgent session of the Knesset Interior Committee to deal with the threat of the imminent collapse of the eastern Temple Mount wall, the result of ongoing illegal Islamic Wakf construction.

posted on May, 23 2004 @ 07:22 PM
link
God heavens, I'm not even a very good Bible scholar and even I know that the rebuilding of the Temple would be a major biggie. Not to mention all the real-world political ramifications if the Temple were to collapse. Yep, Jack Van Impe and ilk would go absolutely beserk!!!!
joey