The title of the story pretty much sums it up, but let's get to the meat of things:

Pascale Joassart-Marcelli and Fernando J Bosco are part of an anthology released this month titled “Just Green Enough.” The work, published by Routledge, claims there is a correlation between the “whiteness of farmers’ markets” and gentrification.

But let's just see what they have to say, because I'm sure that they're onto something, here (now quoted from the CampusReform article:


... farmers’ markets are “exclusionary” since locals may not be able to “afford the food and/or feel excluded from these new spaces.”

This social exclusion is reinforced by the “whiteness of farmers’ markets” and the “white habitus” that they can reinforce, the professors elaborate, describing farmers’ markets as “white spaces where the food consumption habits of white people are normalized.”


Check the White Habitus at the door, please.


... 44 percent of the city’s farmers’ markets are located in census tracts with a high rate of gentrification, leading them to conclude that farmers’ markets “attract households from higher socio-economic backgrounds, raising property values and displacing low-income residents and people of color.”

But, regardless as to whether or not my conclusions align with theirs, I'm sure that since they've cited this "white habitus" as being both a problem for lower-income and minority communities and a contributor to gentrification, they must have some great ideas to deal with this "problem" that they've addressed:


The professors stop short of offering specific remedies, but do conclude that “curbing gentrification is a vexing task” that requires the involvement of both community members and local governments.

“Strong community involvement,” they say, is necessary in order to ensure that “the needs of the poorest...residents are prioritized,” while local governments can enact “equitable zoning policies, rent-control laws, and property tax reforms in favor of long-time homeowners” to combat the trend toward gentrification.


Oh, I see, they have no clue as to how this issue should be addressed--but, hey, they spell out a lovely example of socialist governance, so there's that gem! We all know how, over time, socialism always affects the poorest people in the best of ways.

Well, anyhoo, feel free to discuss the asininity of the cultivation of racism by the existence of farmers markets. This ought to be fun.

I hate the political mud pit, but dammit, I couldn't find a better spot for it.

Here is a link to Just Green Enough, if you're interested in purchasing a book that describes itself this way:


Racism is a industry now.

The customers that go to the Farmer's market in my college are mostly composed of Hispanic Americans.
edit on 12/28/2017 by starwarsisreal because: (no reason given)

originally posted by: Theprodicalson
Everything is racist.


Racism is a industry now.


light bulbs are the world's largest racist industry
i should email those 2 morons and ask what they think about light bulbs
edit on 28-12-2017 by odzeandennz because: (no reason given)

Bluntone22
+13 more
posted on Dec, 28 2017 @ 01:33 PM
link
So basically what they are saying is that improving a neighborhood is making the people that made the neighborhood bad in the first place unable to stay in that neighborhood because the improvements raised the property values in the neighborhood.

DrStevenBrule
+26 more
posted on Dec, 28 2017 @ 01:34 PM
link
Anyone still trying to convince yourself that white culture isn't under attack in US? 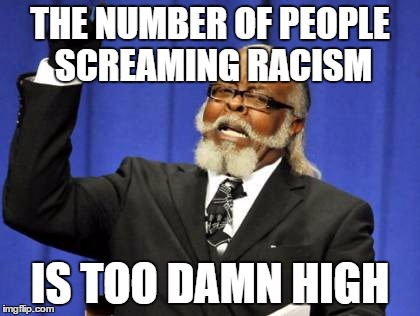 While there is a lot of racism in this country coming from all sides.

posted on Dec, 28 2017 @ 01:39 PM
link
a reply to: SlapMonkey
Wow those are some racist ass professors. Don't alot of farmers markets accept food stamps??? How would that be detrimental to the community, bringing nutritional diverse food selections to them they can still purchase with government assistance?

posted on Dec, 28 2017 @ 01:40 PM
link
Well, I work at a law firm, so here's an article I authored on the effects of quantum gravity particles towards light wave displacement....

Seriously though, Number one - I am not surprised in any way that this came out of California.
Number two - They have no idea what they're talking about, and just like using big words to make themselves sound cool.
Number three - Farmer's markets promote about as much whiteness as a 7/11 promotes blackness....

So is Whole Foods racist? Nice restaurants with high quality food are racist? I guess Mercedes is racist because their cars are too expensive for the poor.

Why don't idiots get off their asses and get a well paying job if they like nice things like everyone else?

That is the problem with Beverly Hills. Many of the white residents there believe all brown people are poor yet they call all Trump supporters and conservatives racist.
edit on 12/28/2017 by starwarsisreal because: (no reason given)


Interesting that they mention farmers markets being unaffordable.

I have found that not only am I getting better produce and meats in many cases, but also better prices than the local supermarket. Granted the farmers market has items you typically don't find at an average supermarket like very exotic mushrooms, non-mass produced cheeses and locally-sourced specialty meats but the standard fare is very approachable price wise as the overhead is lower and you're cutting out the middle people.

posted on Dec, 28 2017 @ 01:51 PM
link
maybe if we all just ignored idiots like these instead of giving them publicity we could start going back to the way things used to be.

You know, before it was considered racist to buy groceries while having white skin.

originally posted by: DrStevenBrule
Anyone still trying to convince yourself that white culture isn't under attack in US?

Are minorities treated unfairly or something?

I'm white and I don't feel like my culture is under attack.

I read the article and saw "new book," and that's all I needed to see.

It's a good marketing ploy, that's for sure.

Everywhere else including Europe I always hit farmers markets the food is cheaper and fresher typically.

FauxMulder
+2 more
posted on Dec, 28 2017 @ 01:57 PM
link
The local farms / produce stands by me are always cheaper than the grocery store and higher in quality.

Funny thing is, one of the farms is owned by a black family. He must be racist too.